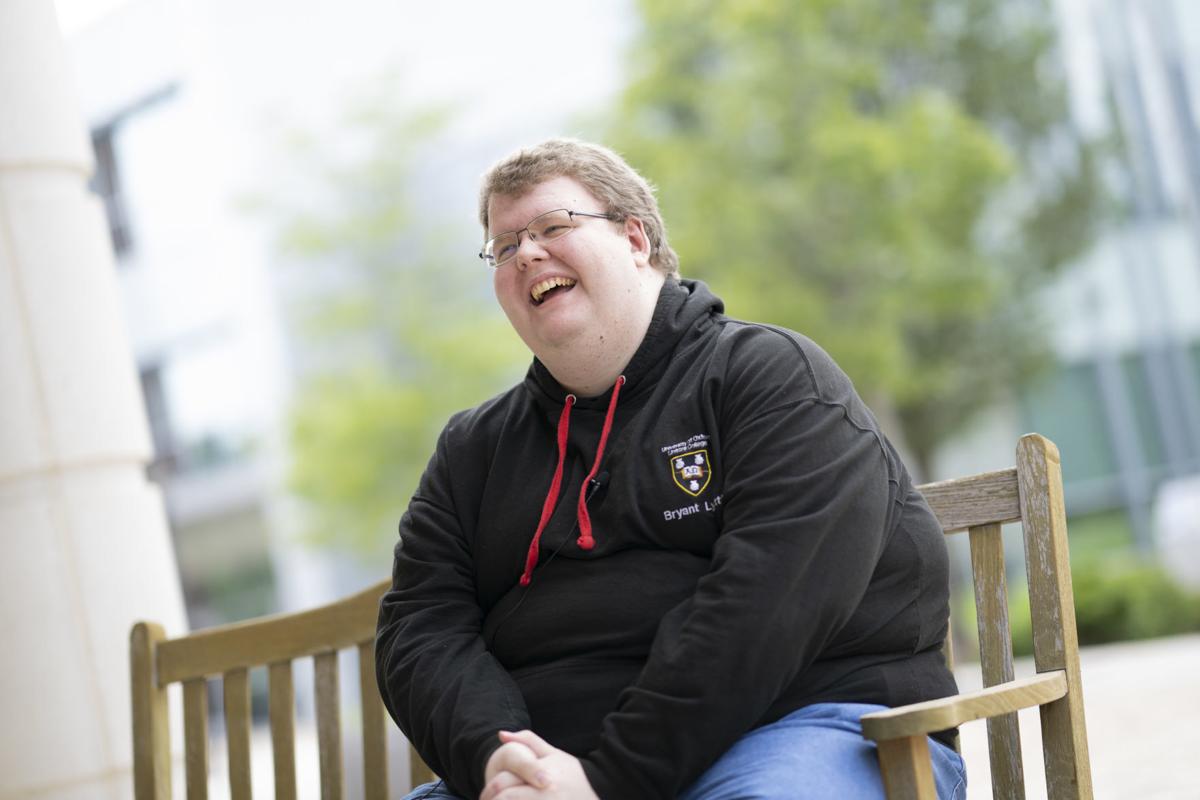 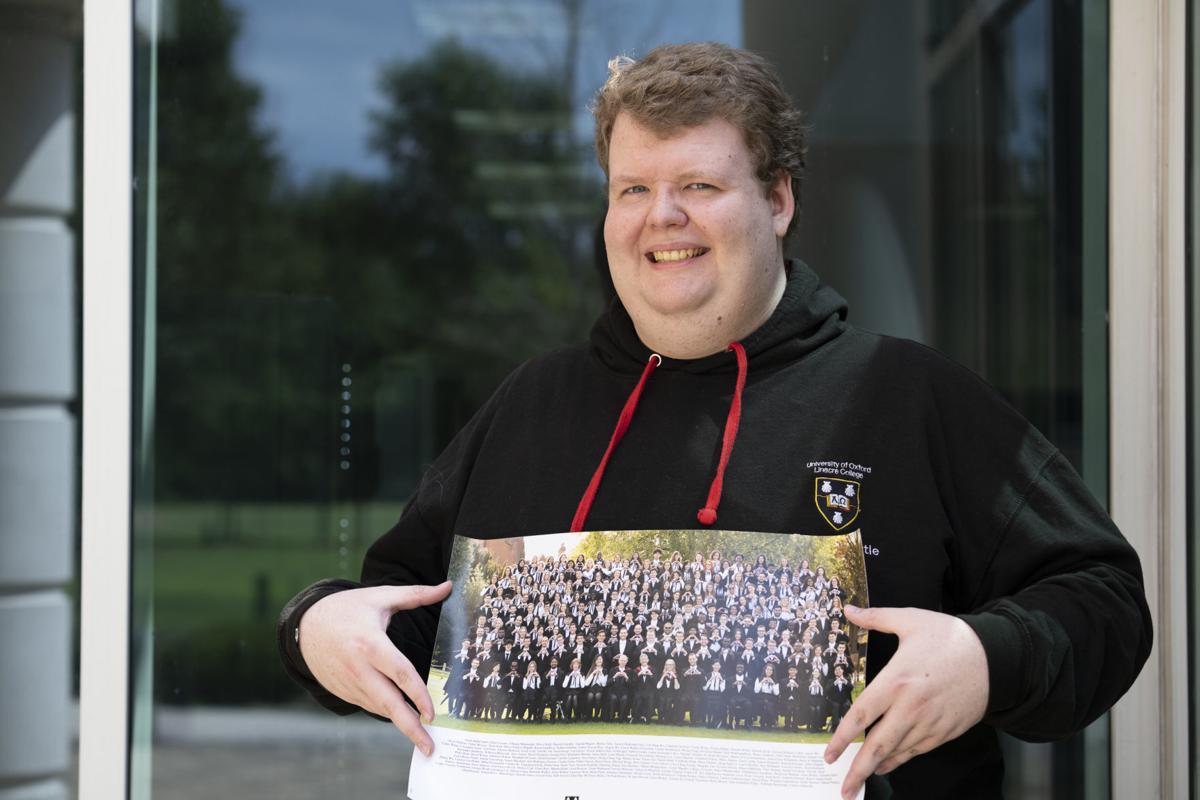 Bryant Lyttle studied at Germanna Community College, George Mason and Oxford, and returned home to study virtually amid the pandemic. He’s in the middle of the second row in this photo from Oxford’s Linacre College.

Lyttle (middle of the second row) is pictured at Oxford’s Linacre College. He returned home to study virtually amid the pandemic.

By ADELE UPHAUS-CONNER The Free Lance-Star

In 2010, Bryant Lyttle was a “middling” senior at Orange County High School who’d had to repeat Algebra II and had not been accepted to any of the four-year colleges he’d applied to.

Today, he is finishing up a master’s degree at Oxford University and plans to pursue a doctorate in cultural anthropology.

In between, he attended Germanna Community College, and he credits Germanna with giving him the self-confidence to set off on a journey into the highest levels of academia.

Lyttle was the first in his family to consider a post-high school degree. His parents were supportive, but they didn’t have much to offer in the way of advice.

At Orange County High, Lyttle said, there were too many students and too few guidance counselors to provide the level of one-on-one support he needed.

His math and science grades in high school weren’t great and colleges weren’t in a rush to accept him. The University of Virginia rejected him and so did George Mason University and Virginia Tech.

Even if those schools had accepted him, it would have been difficult for him to afford tuition, and to top it off, he wasn’t exactly sure what he wanted to study.

Lyttle did take a dual-enrollment class in high school and had earned some credits at Germanna. So, unsure of what else to do, he applied to continue his studies there.

On the Germanna campus, he was surrounded by students who were older, who had more life or work experience and who came from different backgrounds. It opened his eyes.

“Germanna was helpful in that it taught me how to be a student and it also provided me with a bit of a unique perspective that I wasn’t expecting,” Lyttle said. “It kind of let me put more value on practical experience than on academic experience.”

“Someone can get rejected from pretty much every four-year school they apply to and still want to keep going and not let that deter them,” he continued. “Those are the kind of people I was surrounded with at Germanna.”

Lyttle said Germanna wasn’t an easy ride for him. His favorite professor failed him, he recalled.

“He was tough, but fair,” Lyttle said. “Even though I had difficulty in his class, because I was making an effort, he never made me feel stupid or less than when I was struggling. I was appreciative of that attitude.”

Lyttle earned an associate degree in general studies with a specialization in psychology and spent some time in the workforce as a security guard.

Then he applied and was accepted to George Mason. While there, he received a letter informing him that his high GPA made him eligible for a study-abroad program at Oxford University.

He was accepted into the program and spent a semester in 2018 studying at the oldest and one of the most prestigious universities in the English-speaking world.

“I just loved the whole experience,” Lyttle said. “So once I graduated George Mason, I thought, ‘I’ll just apply there for graduate school. What’s the harm?’ ”

He applied for a degree program in cultural anthropology and was accepted into Linacre College — one of the 39 semi-independent colleges that make up Oxford University. Linacre is one of Oxford’s most diverse colleges in terms of its membership, which represents 133 countries — and it has other similarities with Germanna, Lyttle said.

“[Linacre’s] motto is ‘No end to learning,’ and I got that from Germanna as well — that learning is a journey,” he said.

Lyttle spent the first year of his graduate program in England, but when the COVID-19 pandemic arrived, he had to return home to Orange County and continue his studies online.

He’s now finishing up his thesis — a meta-analysis of existing ethnographies, or scientific descriptions of the customs of individual cultures, to determine what makes them worth reading to other cultures.

He’s been receiving emails to apply for scholarships to continue his work at the doctorate level, and he plans to follow through on that once the pandemic is over.

Lyttle said his dream is to join the U.S. Institute of Peace, a national, nonpartisan institute founded by Congress in 1984 to promote nonviolent conflict resolution around the world.

“It would be thrilling to work with them,” he said.

Lyttle said he hopes his story inspires others.

“If you have the desire to move forward, community college is your second chance in a lot of ways,” he said. “I wasn’t a great high school student, but because Germanna gave me the chance that four-year colleges wouldn’t, now I’m a student at Oxford.”

RINGGOLD, Va. (AP) — Authorities in Virginia are investigating the fatal shooting of a juvenile at a county fair.

CAPRON — Warning of security risks at its facilities, the Virginia Department of Corrections says it is experiencing its worst-ever staffing c…

Bryant Lyttle studied at Germanna Community College, George Mason and Oxford, and returned home to study virtually amid the pandemic. He’s in the middle of the second row in this photo from Oxford’s Linacre College.

Lyttle (middle of the second row) is pictured at Oxford’s Linacre College. He returned home to study virtually amid the pandemic.