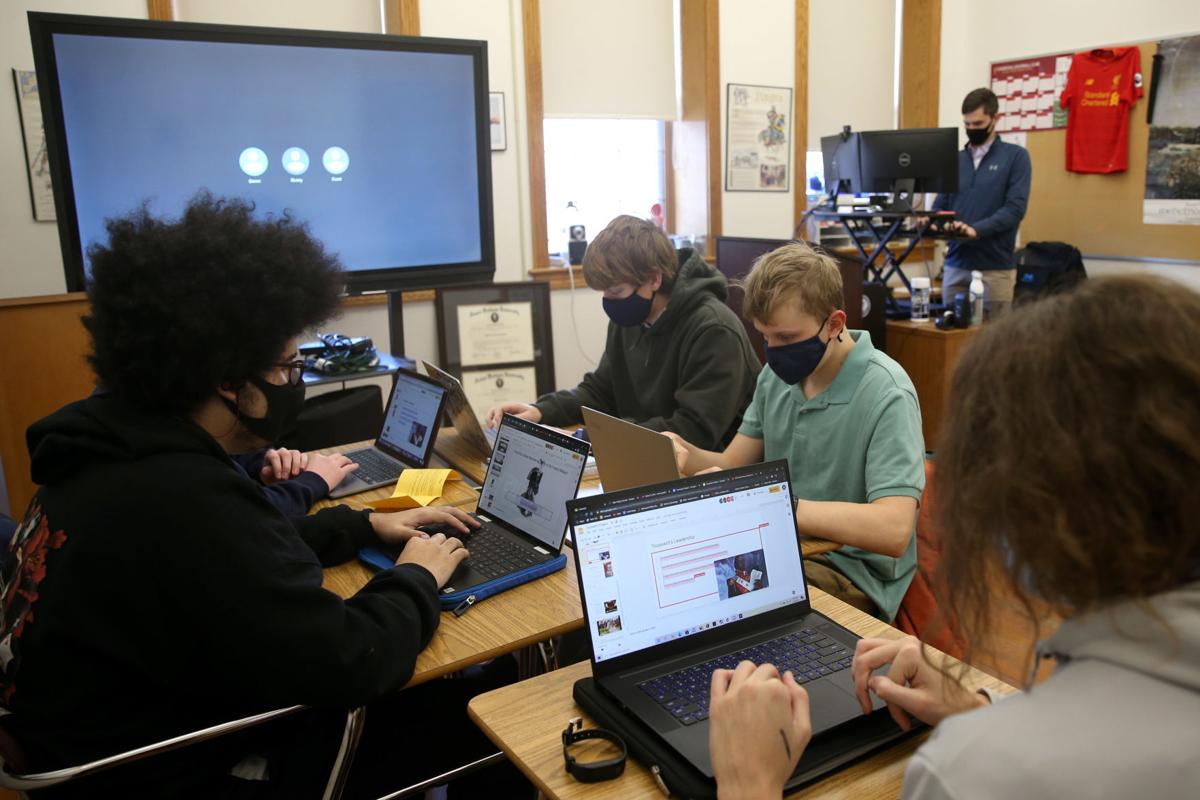 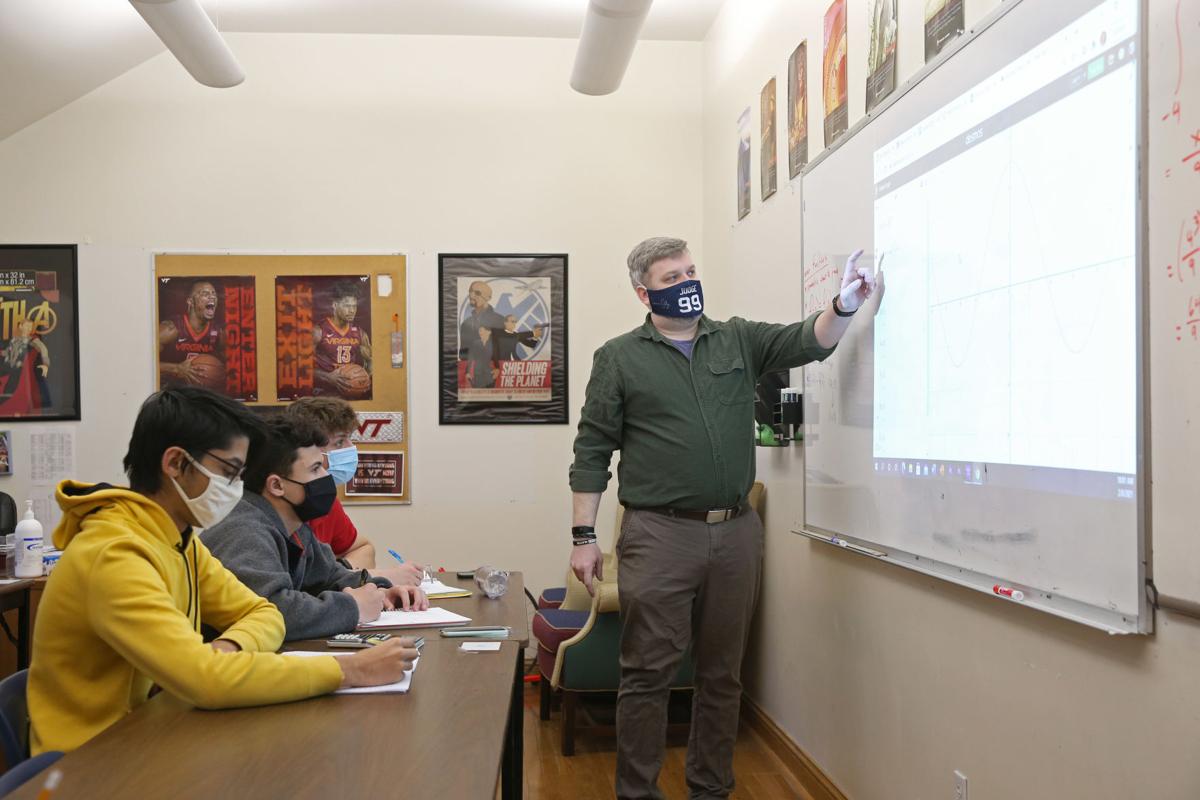 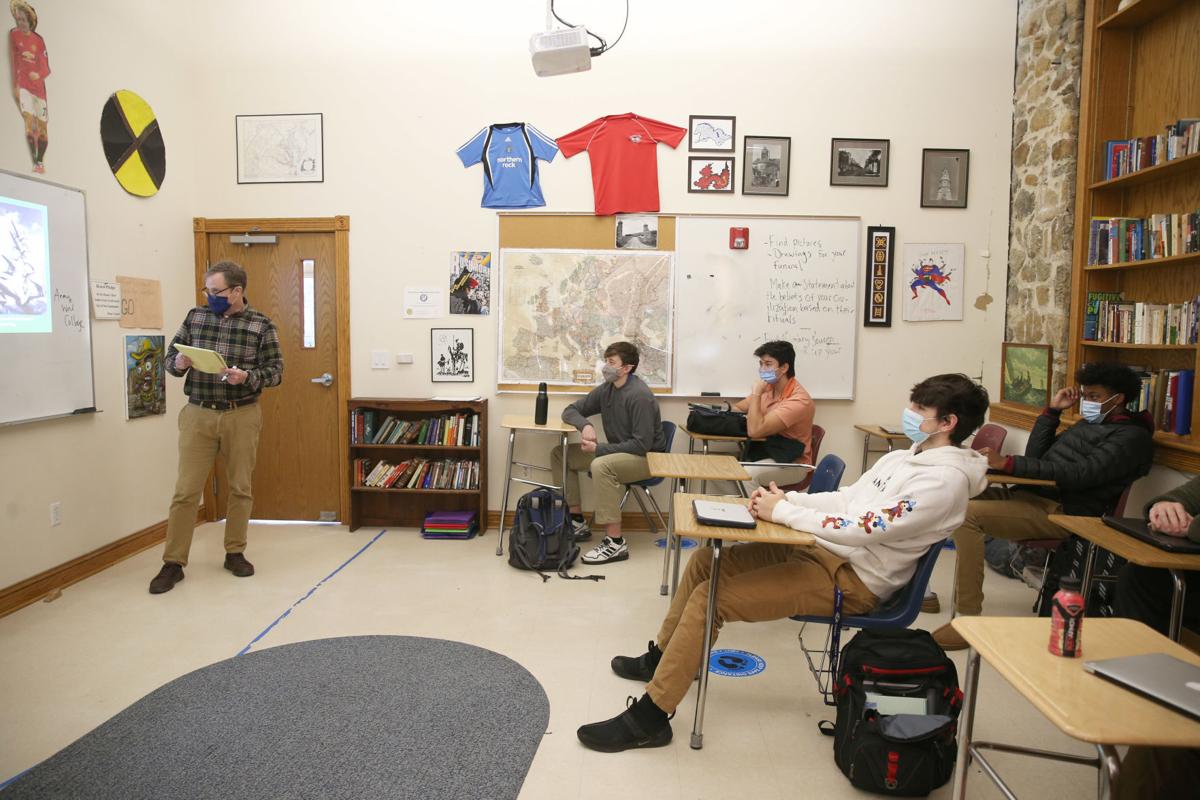 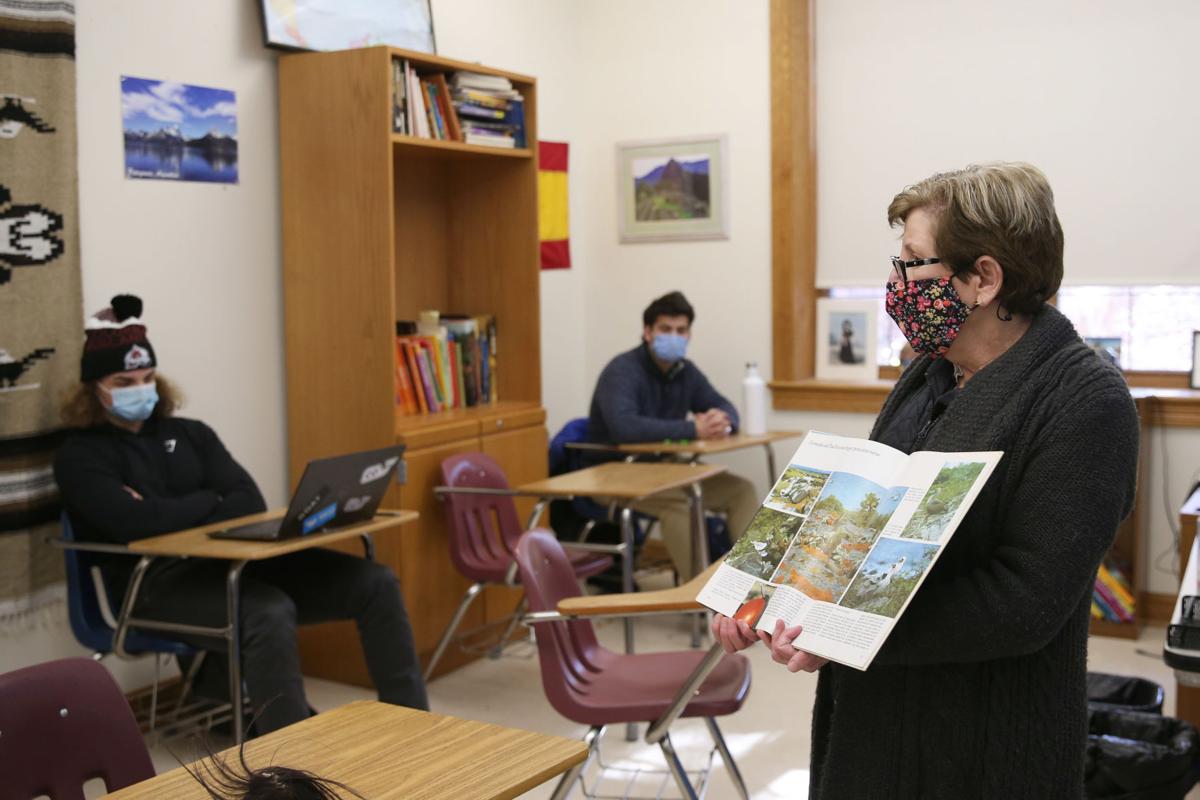 Vicki Laub leads a Spanish class at the school, where, so far, no students have tested positive for COVID-19.

By KATHERINE KNOTT The Daily Progress

ST. GEORGE — Tristan Emmanuel was initially apprehensive about returning to the Blue Ridge School for in-person classes this past fall.

“Because it’s a bunch of people from all over the place coming to one place and 500 feet of each other all the time,” he said.

But, eventually, Emmanuel’s concerns abated, and he started to adjust to a new normal at Blue Ridge, with outdoor assemblies and students and staff members wearing masks and social distancing. The first two weeks on campus in August were weird, he said, as all the students quarantined — a key to the school’s strategy in creating a coronavirus-free bubble.

“I’m just glad to be here, and I’m just glad to even have a senior year,” he said, adding that he’s grateful to be able to compete in his final mixed martial arts season.

Over the last several months, the all-boys boarding school in Greene County has sought to provide as normal a school year as possible while implementing several COVID-19 protocols, such as frequent testing and symptom monitoring, to limit the spread of the virus among the roughly 150 students.

In the first term, which lasted until mid-November, Blue Ridge didn’t have any positive cases. The school first welcomed back students in August and recently completed a second round of student quarantines following the holiday break as part of rebuilding the bubble.

“That was obviously a great success for us, and we were very excited about that,” said Trip Darrin, headmaster at Blue Ridge, adding that the school year thus far has been harder than he thought.

“We’re very fatigued,” he said. “It’s been a great challenge.”

In the fall, students were brought onto the campus in two waves, each quarantining for two weeks as part of a five-week process that also included COVID-19 testing. For the second term, that whole process was condensed to three weeks.

The school plans to shorten the quarantine process more for the third term if all employees can receive the vaccine.

That initial quarantine period was rough, said Lucas Dudley, a junior at Blue Ridge, and other students.

“That was definitely the most difficult time for everyone,” said Dudley, who is from Farmville. “The school worked hard keeping us entertained hopefully, and doing something productive. But when you’re in isolation in your room, or just to some degree, it’s difficult.”

When students returned in January, Darrin said they were more careful because of the surge of cases locally and nationally. That meant more COVID-19 testing and quarantining students who had symptoms.

“Back in the fall, I think we had absolute confidence in the bubble of not knowing that there’s no way that kid could have COVID,” Darrin said of a student who had a fever or other symptoms during the fall term. “We’re not taking those risks this time.”

The school also doesn’t allow parents to visit campus, and it competes in athletics against hand-picked schools that follow similar protocols as part of the bubble strategy.

Blue Ridge has two nurses on site to conduct the COVID-19 tests that were purchased from a Glen Allen lab. The school also bought a rapid testing machine to use if someone is showing symptoms.

After all of the students were tested after the quarantine period, Dudley said he felt relief that no one had tested positive.

“We could begin classes again, and I was like, ‘OK, we made it through the quarantine period. Now I get the reward, and get to resume some version of normalcy,’” he said.

Not all bubbles at boarding schools have been successful. Woodberry Forrest School in Madison County is currently dealing with an outbreak that’s led to 11 cases, according to the Virginia Department of Health.

Darrin said the bubble at Blue Ridge is not impermeable, as some staff members live off campus and the school receives deliveries. Some students have had to leave campus to go to doctors’ appointments and other necessary trips.

“I think when we first set out, I had this vision that we create the bubble, and then everybody would take their masks off and we’d be running across the field happily, and life would be normal again,” Darrin said. “It never was, because we can’t.”

So students and employees wear masks and social distance inside the bubble. Wristwatches monitor students’ temperatures.

The 750-acre campus has provided ample opportunities for students to safely interact with one another. There are trails for hiking and mountain biking, fields for playing soccer and other sports and a lake for fishing and canoeing.

Dudley said that “the outdoors have been, at least for me, really important. ... Spending time outside as much as possible, so that you’re not cooped up indoors, particularly during that quarantine period, and just trying to socialize with the people that are here and building those relationships to not feel so isolated.”

Emmanuel, the senior from Bethesda, Md., said he appreciates being on campus.

“I definitely can’t do the things [at home] that I do here, and I’m just really grateful for the campus and all that nature and stuff like that,” he said. “So it’s definitely a blessing, really.”

Matt Sawyer, a junior from Sawyer, Md., has only had one really normal school year at Blue Ridge after his sophomore year was cut short at the start of the pandemic last spring. He said the virtual classes didn’t work for everyone, and not having an in-person school year could’ve made it more difficult for students to progress.

“But since we came back now, we’re almost getting grades back up and becoming more of what we actually are,” Sawyer said.

He added: “Because we only had one school year that’s been like normal, the other year and a half or so has been a struggle, but it also hasn’t been as bad as we thought it would be. Of course, we weren’t expecting this was going to happen.”

Darrin said the school’s mission-driven focus on the boys’ interests and education have helped them get through this school year.

“We’ve also seen how much the boys have benefited from having the in-person schooling,” he said.

After returning home in November, one student said he didn’t realize how much he appreciated the bubble until he left.

“It’s all scary again [for him],” Darrin said. “He’s back worried about where he can travel to and where he can’t, and here he felt really safe. Those things sustain you when you feel like it has a purpose. There’s a reason we’re going through all these hoops. We’re trying to help our boys and get them educated.”

BRISTOL, Va.—A grand jury in Bristol, Virginia, has indicted a city police officer on a murder charge in connection with a fatal officer-involved shooting.

Va. prison inmate wrongfully convicted of 1979 rape and in hospital with cancer is granted release

A man wrongfully convicted of a 1979 rape, exonerated by DNA testing and who is now seriously ill from cancer was released — much to his surpr…

VIRGINIA BEACH — A former Virginia priest has been charged with sexually assaulting a minor four decades ago.

Vicki Laub leads a Spanish class at the school, where, so far, no students have tested positive for COVID-19.