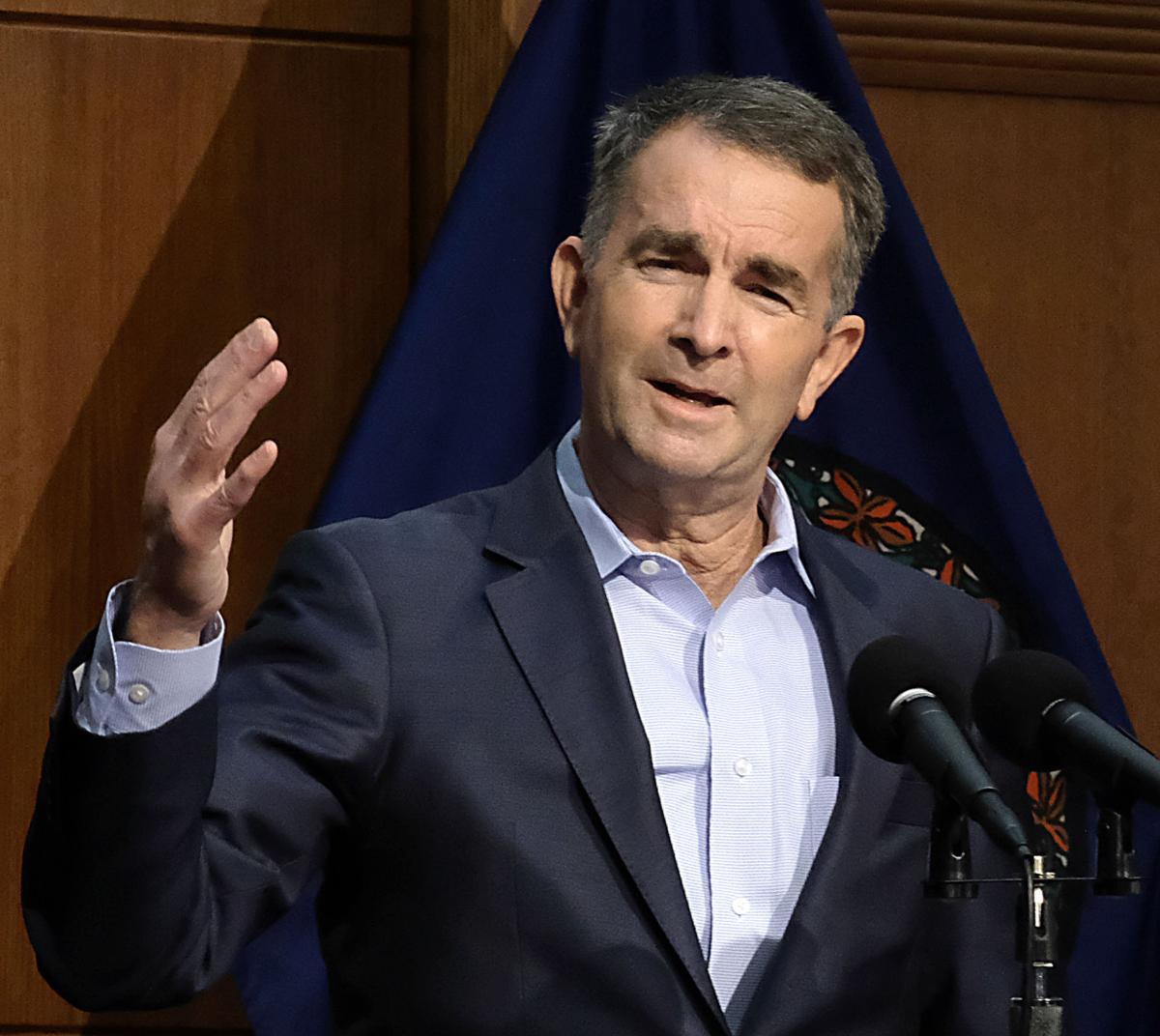 Gov. Ralph Northam addresses the public and the media Thursday while announcing new COVID-19 restrictiions during anews conference at the Patrick Henry Building. 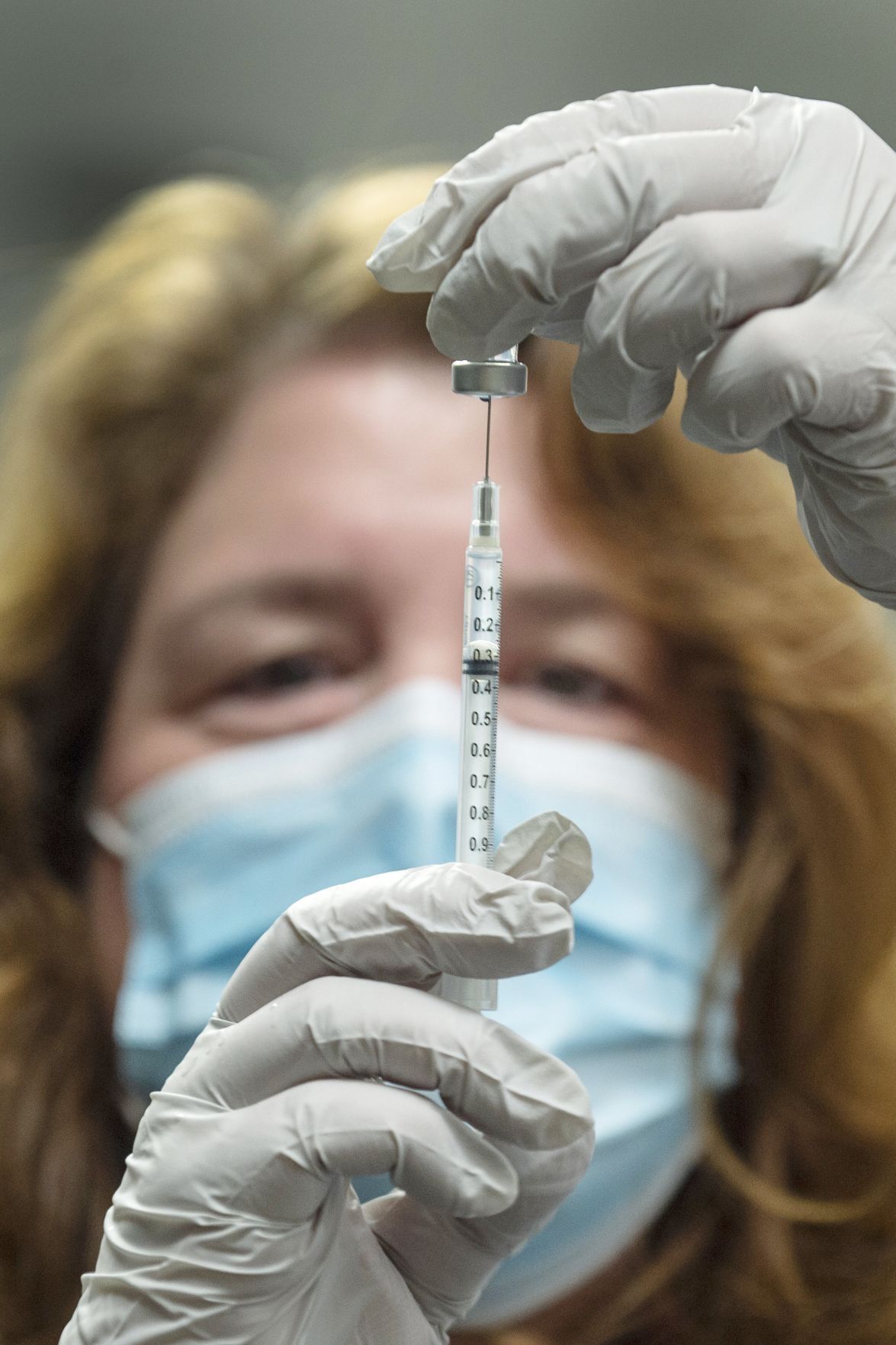 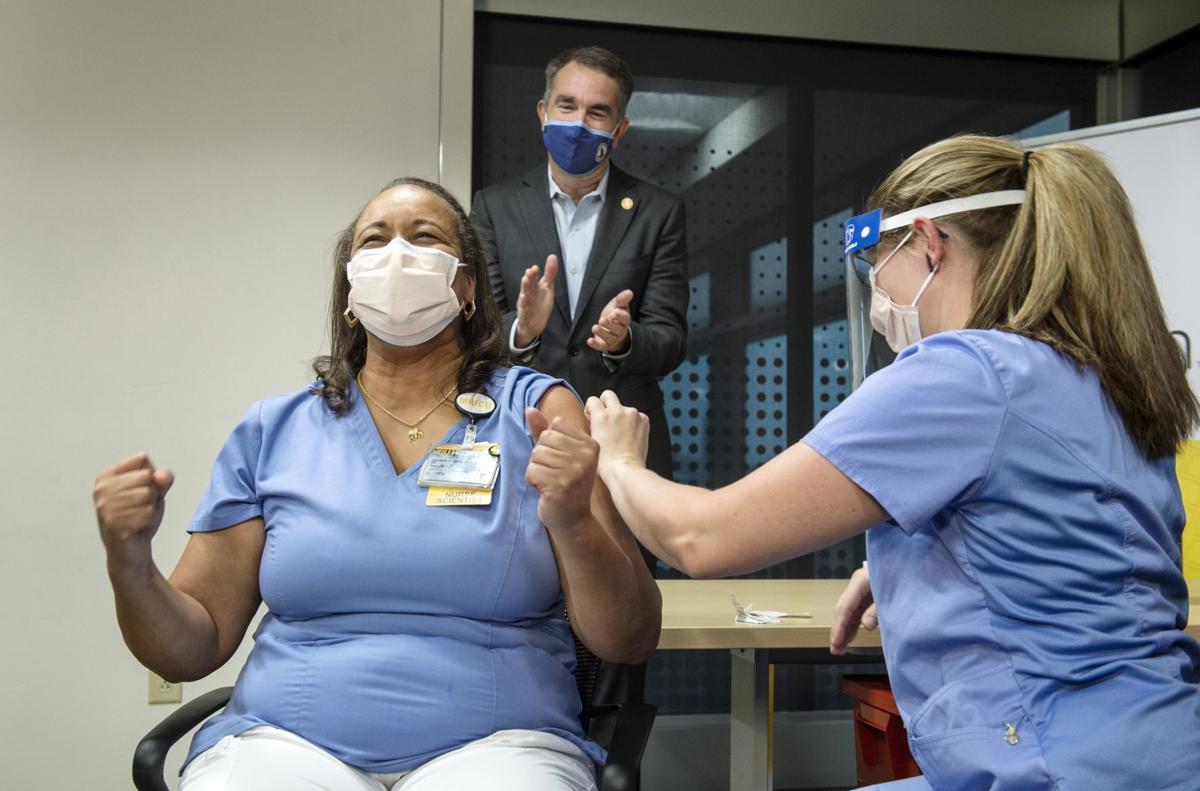 Federal officials notified Virginia on Thursday that the state will receive about 110,000 fewer doses of Pfizer’s COVID-19 vaccine than it was promised at the start of this month.

The change, confirmed Friday morning by the Virginia Department of Health, could mean thousands of health care workers and nursing home residents will have to wait longer than expected to receive a shot.

In an interview Friday, state director of epidemiology Lillian Peake said the reasons for the revised estimates are unclear but that the state’s 146,400 vials of the Moderna vaccine — cleared by the Food and Drug Administration late Friday — will be delivered to facilities, hospitals and local health departments as scheduled next week.

Next week’s shipment of the Pfizer vaccine will be 50,700 doses. Virginia’s first batch, distributed Monday and Tuesday, was 72,150 doses.

“This is an emerging situation. These are new vaccines and there will be bumps in the road,” Peake said. “We have to just work together in the planning to adjust and be flexible, and we will work as hard as we can to get the vaccine that we get, out as quickly as possible.”

The VDH is not releasing the names of hospitals receiving shipments, or the number of doses allotted to each due to security reasons and facilities redistributing their numbers to other sites, making specific numbers difficult to track.

The federal government provides the number of doses each state can order on a weekly basis, then states file those numbers into the ordering system and determine shipping locations.

The Pfizer vaccine shipments for this past week shipped Sunday night, Peake said, two days after the FDA issued emergency use authorization for millions of vials.

Virginia’s original estimate of 480,000 doses would have been enough to inject nearly all of the state’s 500,000 health care workers and long-term care staff and residents, which federal officials and the state have singled out as the top priority, by the end of the year.

The news comes on the heels of officials in several states learning late Wednesday that they would be shortchanged in next week’s vaccine shipment — three days after the first batch of COVID-19 vaccines rolled out across the U.S. and Virginia pledged to send 8,000 doses to the District of Columbia.

Washington state, Oregon and Illinois officials are expecting their scheduled dose count to be nearly halved, a significant change that Washington Gov. Jay Inslee called “disruptive and frustrating” in a Thursday tweet.

In a news briefing Tuesday, Florida Gov. Ron DeSantis said the shipments slated for Florida — about 450,000 vaccines — have been put “on hold.”

The shift has raised doubts about whether the goal of administering 20 million vaccinations by Jan. 1 — a record touted by Operation Warp Speed, the Trump administration’s distribution team — is attainable.

On Wednesday, Health and Human Services Secretary Alex Azar told reporters that Pfizer experienced “manufacturing challenges,” prompting the company to respond with a statement on Thursday citing inaction from the federal government.

“Pfizer is not having any production issues with our COVID-19 vaccine, and no shipments containing the vaccine are on hold or delayed,” the statement read. “This week, we successfully shipped all 2.9 million doses that we were asked to ship by the U.S. Government to the locations specified by them. We have millions more doses sitting in our warehouse but, as of now, we have not received any shipment instructions for additional doses.”

Adding to the confusion was a statement released earlier Wednesday by the FDA, reporting that the glass vials meant to hold five doses could contain enough for six or seven and stretch the limited supply of a desperately needed vaccine.

There’s no mandate that says health care systems have to use the extra doses, but the FDA outlined recommendations for that include ensuring that the remaining liquid makes a full dose, avoiding mixing multiple vials to create more doses and consulting the state health department.

By now, hundreds of health care workers across the state have begun to get vaccinations.

The state has roughly 8.5 million people, and officials expect it will be months before the vaccine is widely available. Thursday’s announced delay could put doses further from reality for lower-priority groups.

Those include essential workers who are next in line and whose workforce in Virginia includes nearly 275,000 Black and Latino people — two communities disproportionately impacted by the virus.

The line also would include those at higher risk of complications from the virus, but the state has not outlined how it would prioritize people in those groups as of Friday.

Gov. Ralph Northam said earlier this month that food distribution and infrastructure workers would likely be first, but said teachers also may be included further down the line.

The much-awaited COVID-19 vaccines come almost exactly a year after the discovery of the novel coronavirus in humans — unprecedented speed compared with past vaccine developments. Amid an uncontained surge, federal and state officials have hailed vaccine distribution as the “light at the end of the tunnel.”

Pfizer and Moderna, the two leading manufacturers, have outpaced competitors, with both reporting efficacy rates above 90%.

Unlike hospitals, many long-term care facilities are not equipped with ultra-cold storage capabilities, complicating distribution.

Through a partnership with the federal government, residents of long-term care facilities will be vaccinated through CVS and Walgreens, which are slated to deploy teams to those facilities on Monday.

For the purposes of vaccine distribution, health care personnel are defined as “paid and unpaid persons serving in health care settings who have the potential for direct or indirect exposure to patients or infectious materials.”

Residents of long-term care facilities are defined as “adults who reside in facilities that provide a variety of services, including medical and personal care, to persons who are unable to live independently.”

Priority groups for the vaccine were determined by the U.S. Centers for Disease Control and Prevention’s Advisory Committee on Immunization Practices earlier this week. The committee took into account the heightened risk of exposure among health care workers, and the devastating number of deaths among residents of long-term care facilities, one of the hardest-hit groups during the pandemic.

In Virginia alone, 2,232 residents or staff of long-term care facilities have died of COVID-19, according to data from the state Department of Health.

Gov. Ralph Northam addresses the public and the media Thursday while announcing new COVID-19 restrictiions during anews conference at the Patrick Henry Building.