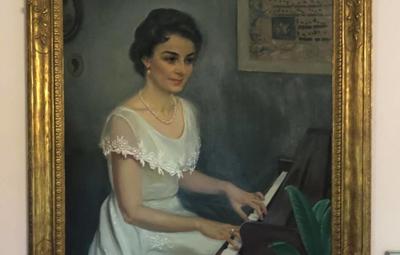 A legendary Martinsville teacher who turned generations of city students into musicians will be honored with a TheatreWorks Community Players livestreamed program on Thursday.

Jonathan Penn, one those students, is the show director of “A Night in Time with Ruth Pace.”

Pace, 95, still lives on the family farm in Ridgeway, and Joyce Irvin, who lives down the road from her, has helped her around for the past decade. Some of Pace's former students shared stories of her superior musical talent which was matched by her famous beauty and classic elegance.

"What can I do but look like a lady when I'm responsible for these babies," Pace said during a Friday visit with former students Penn and Vicky Pulliam Nelson, after Nelson complimented her outfit. Pace calls her former students her "babies."

Then, pointing to Penn, she said, "He's a wonderful little boy. I just love him. He does exactly what I tell him to do, and if he doesn't -- he knows what's going to happen to him."

Laughing, he nodded his head in agreement.

Pace talked about her career: "I could play the piano when I was born, and I've been learning every since. I have had all kinds of good teachers and taught a lot of students," and the more students she has taught, the more she has continued to study, to keep on top of her game.

Pace was educated in Ridgeway Public Schools, the University of Kentucky and the Eastman School of Music, and she continued her training at the Julliard School of Music, the Oberlin Conservatory and the Westminster Choir School.

She never married because, as her former student Vicky Pulliam Nelson said Pace used to tell her, she never found a man she could love as much as she loved music.

“Miss Pace,” as she was called then and still is, was the director of choral music for Martinsville Junior and Senior High Schools and the director or accompanist of several state-level music programs and camps.

She has been president of several professional associations.

She played organ for half a century for First United Methodist Church in Ridgeway.

Penn started studying music under Pace in 2006, when he was a sophomore at Magna Vista High School, through his first year of college.

She was in her 80s when she came to help out in his music class, and when he was a student at Bluefield College, she would help him when he was back in town.

“First impressions are everything,” he said, and Pace certainly made an impression on him.

To help him learn how to project sound, she told him, she would pull strongly on him. She was so little. and he was such a big athlete that he didn’t think her pulling would make much impact.

“She pulled me off my balance almost for the ground,” he said. “I thought, ‘Oh my goodness. This is incredible.”

He ended up taking private voice lessons from her. As a teacher, “She knows exactly what she wants and what it takes to get it out of you,” he said.

When he didn’t have the money for lessons, she would not charge, and once when he needed to dress up for an event, she took him to the store and bought him a full suit, customized.

Nelson and her mother, Linda Pulliam, always refer to Pace as Nelson’s “second mom” – a nickname Pace gave herself.

“I was mesmerized by her from the minute I went into her class the very first time,” Nelson said. That was in the early 1970s, when Nelson was in eighth grade.

Pace made a powerful impact on her “not only by her being the way she looked” – Nelson compared her to Elizabeth Taylor – “the way she presented herself as my teacher and as a musician but also as my friend.”

Pace gave Nelson voice lessons for many years and also helped her develop her skills and an accompanist on piano.

Pace was talented enough to have a high level career in entertainment, Nelson said, but wanted to come back to her community, which she loved very much.

Pace lived on the family farm with her mother, and when an aunt who lived in “the biggest, most sensational home on the farm” died, Pace moved into that house. She still lives there.

Nelson used to spend two weeks there every summer as a house guest, when Pace’s niece who was her age would visit.

Nelson recalled going to Pace’s house for formal luncheons where “she would use the finest silver and crystal. When I was younger she taught me etiquette … and was so well versed in all the social graces” that she seemed to want to pass them on.

On top of that, “she was drop dead, absolutely gorgeous, prettier than Elizabeth Taylor.”

At major choral events, “all the male choral directors were in love with her. You could tell by the way they treated her. She didn’t date them. … But we could see them flirting a bit.”

Pace helped Nelson in her preparations for the 1981 Miss Virginia pageant and played piano while she sang during the competition. Then Pace played piano in the Miss America pageant in Atlanta, when Nelson competed as Miss Virginia.

When Pace retired, Nelson organized her retirement dinner at Bassett Country Club. She made a book for that event, and she still keeps boxes full of letters Pace used to write her as well as mementos.

A mentor to future leaders

Anne Norman Young, Carlisle School’s drama director, said she was mentored by Pace all through her junior high and high school days.

“She featured me as a soloist in many concerts and made me face my uncertainty as a vocalist. Because of her nurturing and instruction, I was able to perform as a singer and a dancer throughout my college career with one of the most prestigious groups in the country,” she said.

Pace attended all of Young’s performances in high school “and cheered me on through college.” Then she attended every theater show and dance recital Young produced until she was no longer able to drive.

“She is the perfect picture of style and grace. I will never forget going to a voice lesson in her home to find her sporting a beautiful red sweater and jeans, lipstick to match, and apologizing for looking such a mess because she had been mowing the grass in the 90-degree heat,” Young said.

Young recalled that, when Pace was her teacher, students would request she play boogie. “Without hesitation, she would light into the piano and make it stand up and sing like none other, playing the most incredible boogie medleys you can imagine.”

Up until 2005, when she was in her 80s, Pace lectured about Brahms and Schubert in Kevin Lewis’ IB music class at Martinsville High School.

“The choirs in the ’60s and ’70s performed works and sections of the requiems of Verdi and Brahms, which are advanced for choirs at any level, especially high school kids,” he said.

“She continued to accompany many of the musicals at MHS after her retirement, and some of my great musical memories are playing with her for weddings and services at Ridgeway [United] Methodist, where she could instantly transpose any piece to whatever key was needed by the choir or instrumentalist,” he said.

She conducted a community choir that was active until 1994, he said.

One of Lewis’ favorite stories Pace had told him was “when transistor radios became the must-have item in the late ’50s or early ’60s. Students were running the single ear piece up their sleeve and listening to them in her class. Seemingly exasperated, she told the students to just bring their radios to class the next day and listen to them. The students didn’t know that she had contacted WHEE or WMVA -- whichever they were listening to as teenagers -- and gave them a set list.

Penn said he was asked by TheatreWorks Community Players to put together a show, and for him it was a no-brainer: “I wanted to set up an appreciation service for Miss Pace because she’s done so much for me and others.”

In honor of Ruth Pace

“A Night in Time with Ruth Pace” can be seen live on Facebook, on the TheatreWorks Community Players channel, at 7 p.m. Thursday. The video will remain on the site for viewing at any time.

The performers of the show are Pace’s former students: Penn, Jamar Bennett and Tehillah Johnson, who took over as choir director at Magna Vista High School after Anita Ray’s retirement.

Samantha Hairston, his business partner in his artist and model management and event planning company, Pennhouse Productions, is assisting.

Each of the performers will sing one or two songs, interspersed with stories about their times with Pace.

He is talking with Joyce Irvin, who has cared for Pace for the past 10 years, to work out the technology for Pace to watch the program from her house, and the icing on the cake would be if she could be videotaped saying something at the end.

A Night In Time

Gov. Ralph Northam along with state health and safety officials will be giving an update on the fight against COVID-19 in Virginia. The update…

A Jan. 14 federal execution date has been set for Cory Johnson, a member of the Newtowne drug gang in Richmond that claimed at least 10 lives …

WATCH NOW: ‘All options are on the table’: Northam urges caution amid worrying COVID-19 trends

Gov. Ralph Northam urged Virginians on Wednesday to hunker down and minimize the risk of spreading COVID-19 as the state and country experienc…

Andrew Zachary Ray resolved his theft charge in Montgomery County Thursday with a plea agreement that brought him a day to serve in jail, a $100 fine and an order to repay Walmart $44.96.

The trail features a nearly one-mile long railroad tunnel designed by engineer Claudius Crozet and constructed by hundreds of Irish immigrants and enslaved African Americans over a period of 10 years shortly before the Civil War. Trailheads are accessible on both sides of the Blue Ridge Mountains. 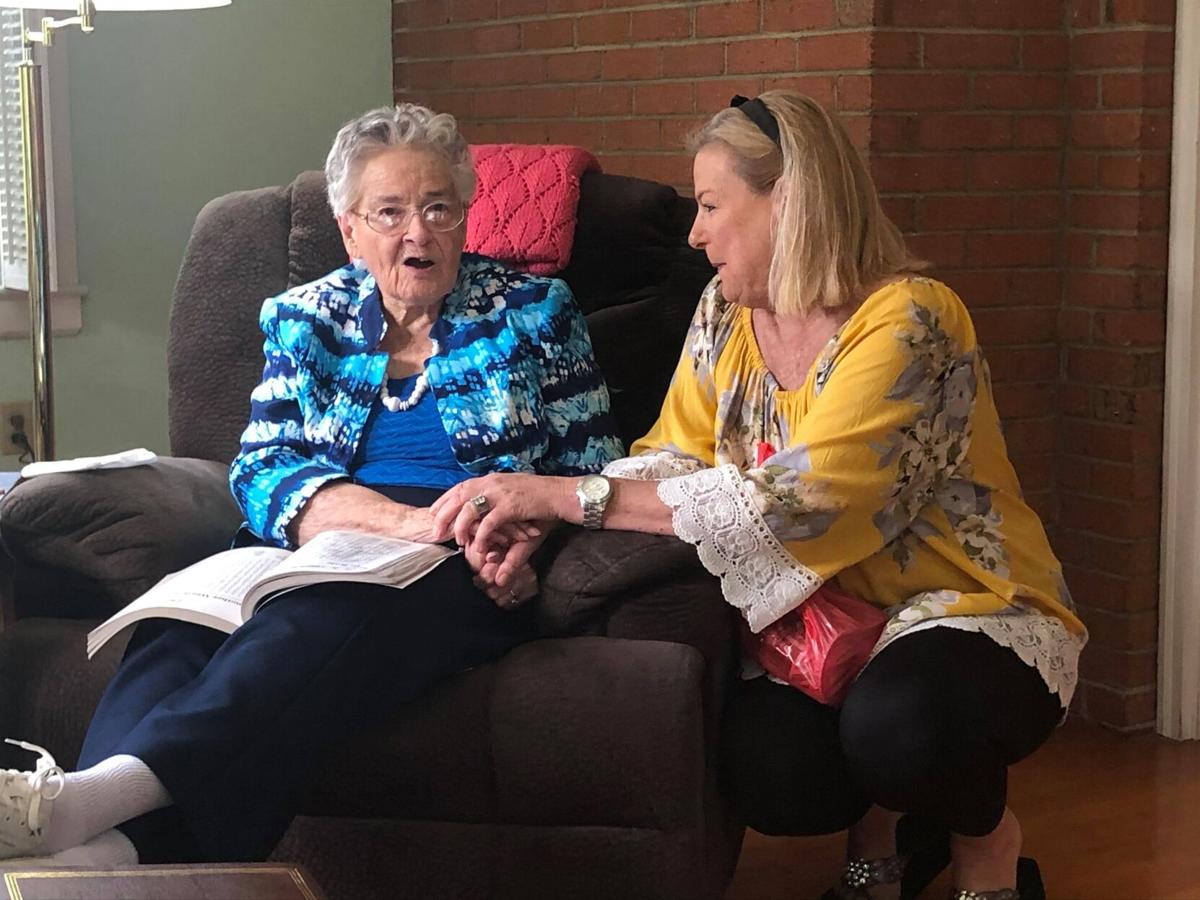 Retired choral teacher Ruth Pace visits with one of her former students, Vicky Pulliam Nelson, who said she always has been mesmerized by "Miss Pace." 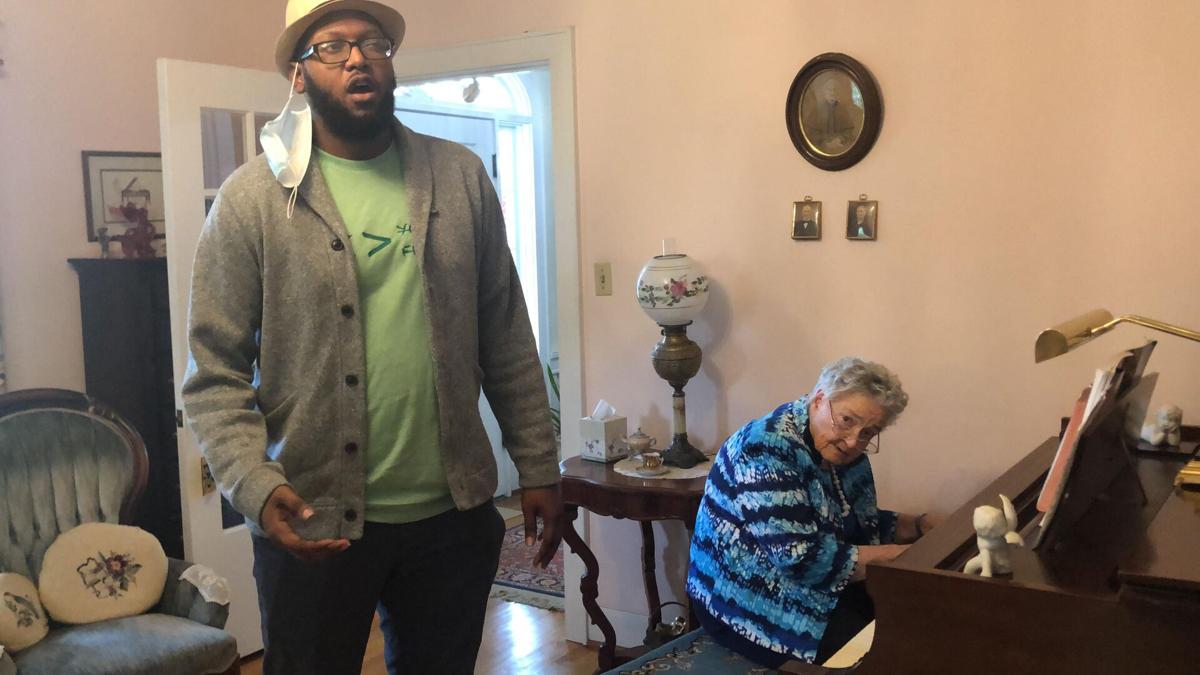 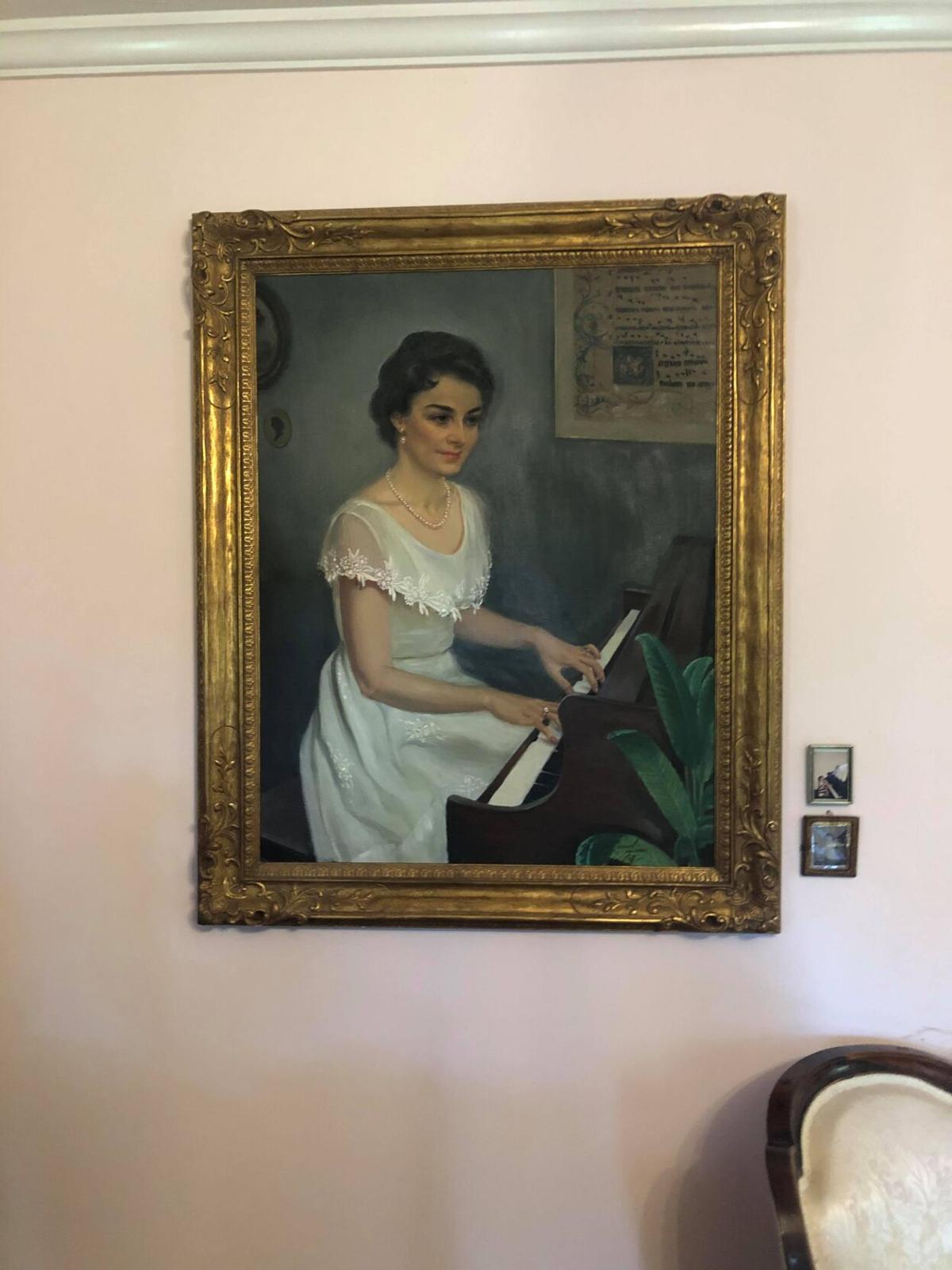 This portrait of Ruth Pace hangs above her piano, which she still plays magestically (with her favorite hymn, "I love to tell the story," played most often). 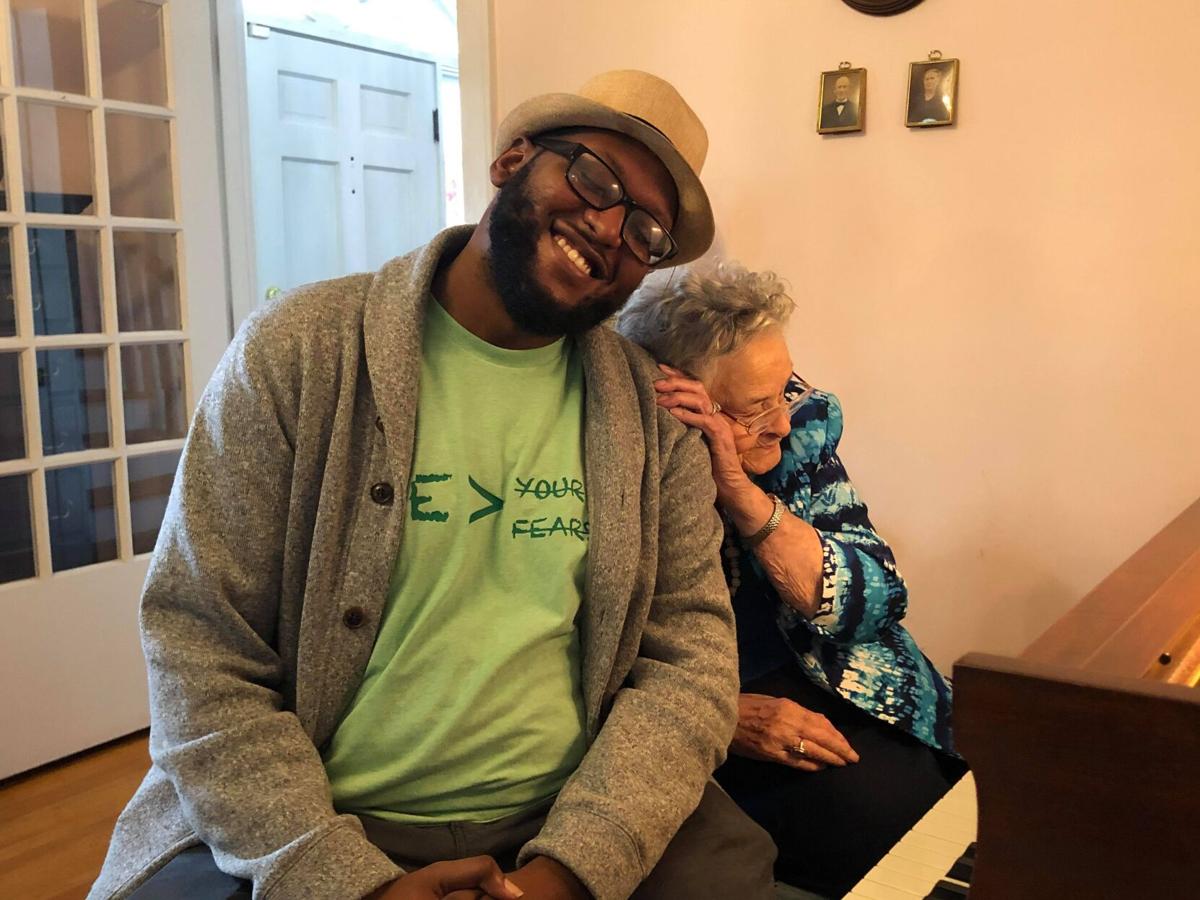 Retired Martinsville choral teacher Ruth Pace enjoys a visit with one of her "babies" -- as she refers to her students -- Jonathan Penn, who is planning a tribute show for her to be livestreamed by TheatreWorks Community Players Thursday night. 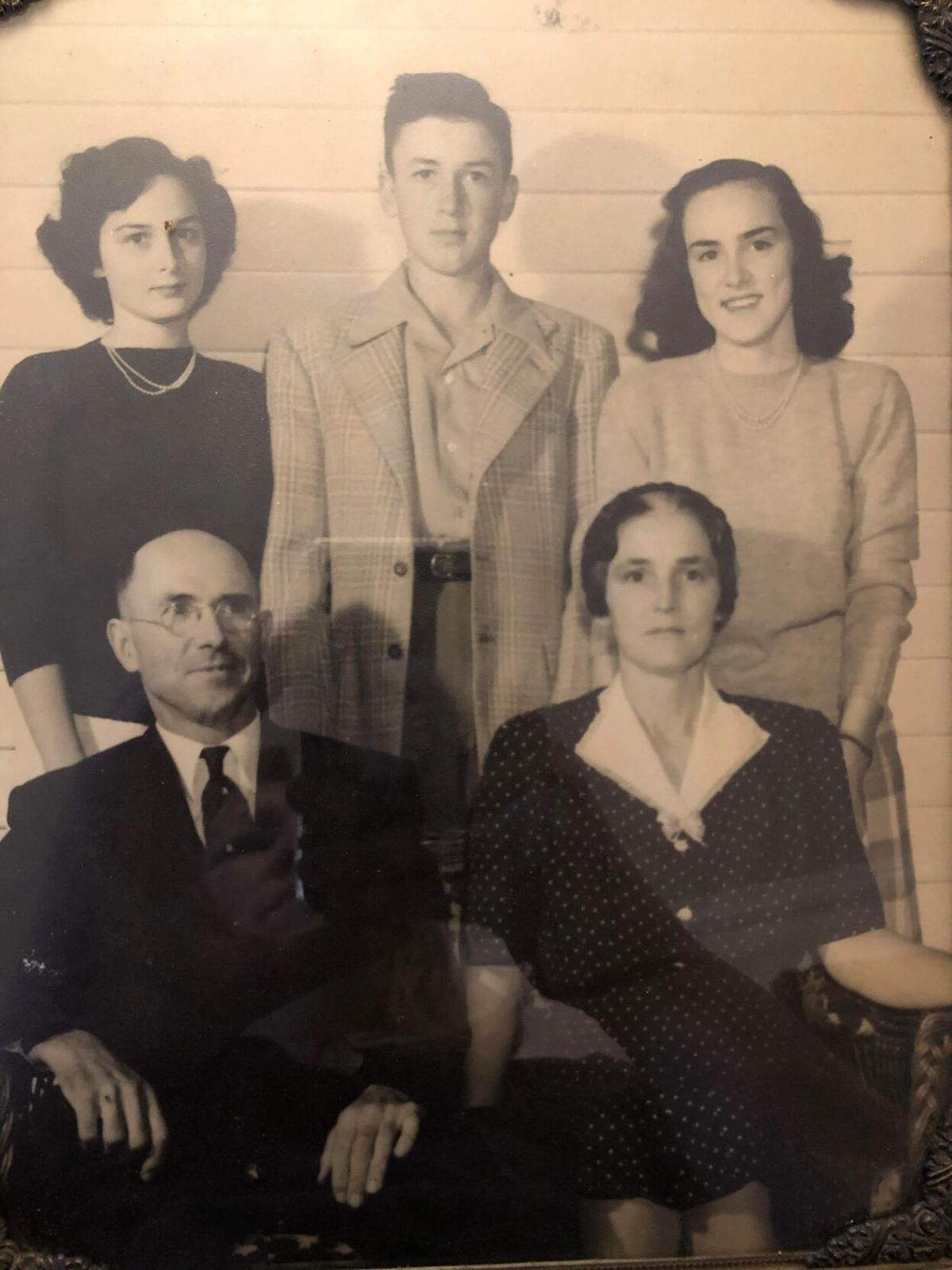 This old portrait of the Pace Family of Ridgeway features Ruth Pace (standing, from left) and the late Dan Pace, Rose Marie Ratts and (seated) their parents, George and Crystal Pace. 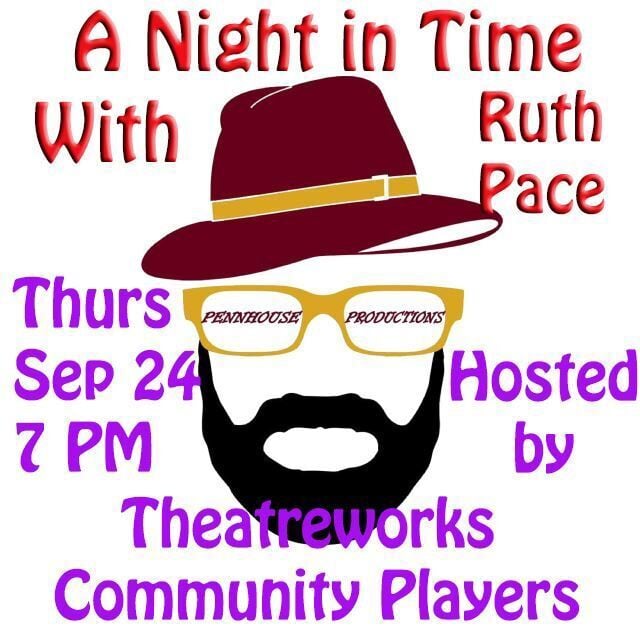 TheatreWorks Community Players will honor popular music teacher Ruth Pace with a show that can be see on YouTube starting Thursday.