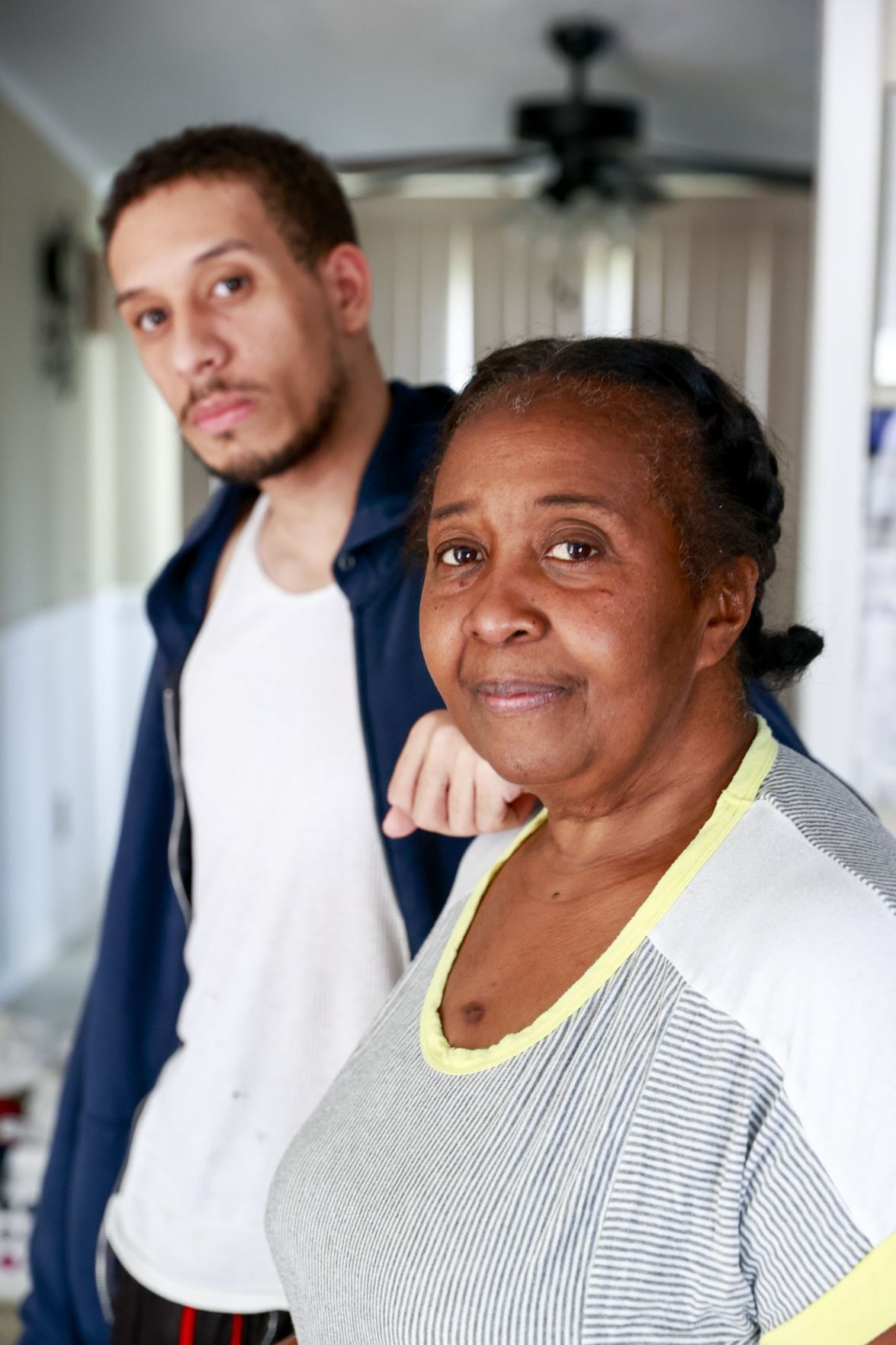 Catherine Smith says grandson T.Q. Jackson, who has autism, lost a year of learning during the pandemic. Jackson, who lives in Prince Edward County, attended the Faison Center in Richmond. A legislative revision could mean full-time tuition to the school. 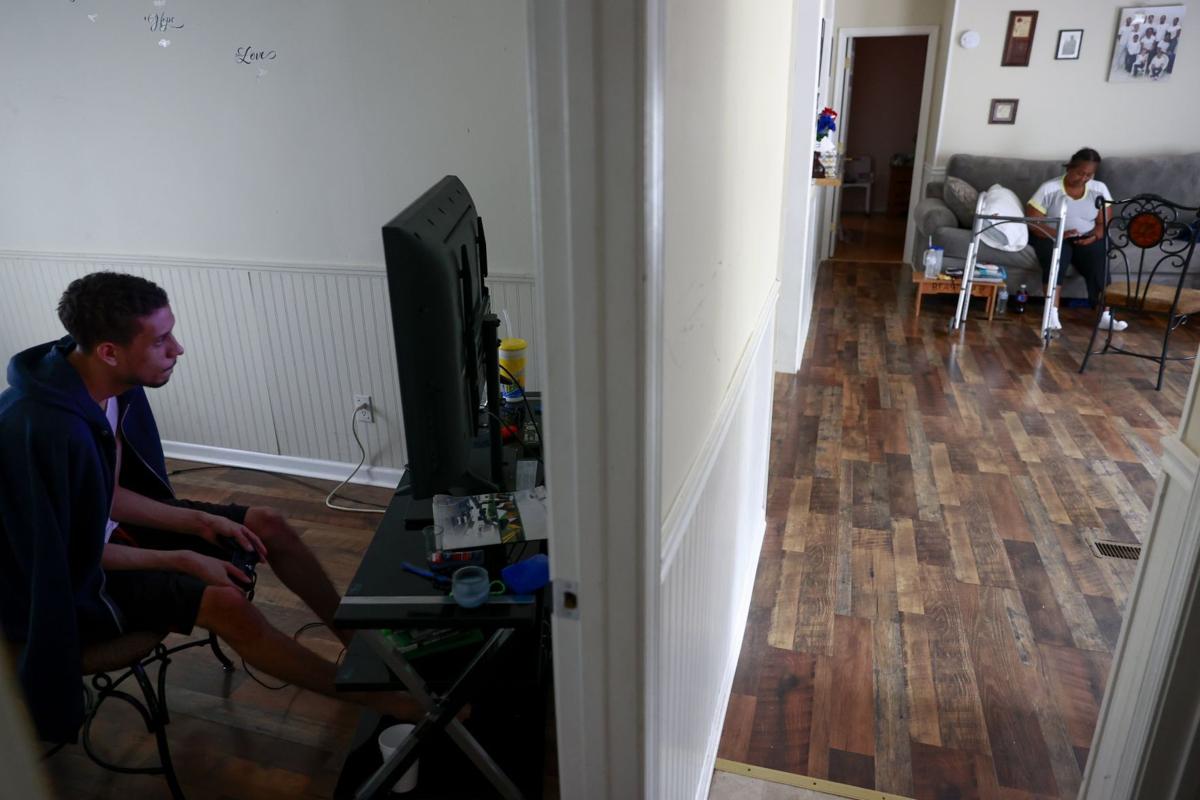 T.Q. Jackson plays video games as his grandmother Catherine Smith looks at her phone. Smith says attending a local high school wouldn’t be conducive for him.

Students with special needs who were slated to age out of Virginia’s public school system last year are now entitled to another academic year with access to support that’s in line with federal mandates.

State lawmakers initially pushed through a bill this year affording students the option of one more academic year — in light of the pandemic — without the guarantee of a free and appropriate public education. That meant localities weren’t obligated to pay for services like private day school.

The loophole left caregivers with no choice, advocates of the students told the Richmond Times-Dispatch last month. After The Times-Dispatch reported those concerns, lawmakers scrambled to amend the bill.

“The thing that was frustrating for me that got me to immediately pick up the phone was, our intent was to make sure that those kids were getting that extra year of education where it suited them,” said Del. Schuyler VanValkenburg, D-Henrico.

But that’s not what happened. Even now, weeks after lawmakers worked on a fix, advocates who last month detailed the shortcomings of the bill have yet to hear from their local school systems or state education officials what it means for them.

“We are thoroughly reviewing what revisions are needed to our guidance based upon the recently passed legislation to ensure all students affected are served accordingly,” said Ken Blackstone, a spokesperson for the Virginia Department of Education.

Catherine Smith, whose grandson T.Q. Jackson has autism and relied in the past on specialized education services from a private day school in Richmond, has yet to learn from his home district, Prince Edward County, what the change will mean. She hopes he will be able to attend the Faison Center five days a week as he did when schools were shuttered due to the COVID-19 pandemic.

“It’s frustrating. It’s very, very frustrating when you see him,” Smith in an interview. “He asks, ‘Grandma, why are they doing this to me? Why do they have a loophole?’”

The law, originally introduced by Del. Rob Bell, R-Albemarle, was meant to give students with special needs who aged out of public school one extra year to compensate for the impacts of the COVID-19 pandemic, which have been especially challenging for those students and their caregivers to navigate.

The bill died in committee. VanValkenburg said it was because the language would later be included in the budget. It was, and lawmakers allocated $6.5 million in federal emergency funds to school systems to serve 600 adult students with severe disabilities who had aged out of eligibility.

But the addition did not guarantee those students an extension of Individual Education Plan services or a Free and Appropriate Public Education as outlined by the federal government.

That meant Prince Edward County Public Schools did not have to cover Jackson’s tuition for the Faison Center.

“It seemed like in the case of that story ... you had one locality that was seeming to say, ‘No, no, no, we’re not going to pay for that private day school. You can have that extra year because we have to give it to you, but you’re going to do it in our school,’ and that wasn’t our intent,” VanValkenburg said.

The amendment, approved on Aug. 10, now explicitly states that payments are meant to support special education private day school costs. It also allows localities to meet their share of the bill by using their own federal funds, and allocates an additional $3.5 million for localities.

Todd Ratner, a lawyer who specializes in special education law, welcomed the changes.

“It seemed to me like the VDOE was going out of its way to interpret the budget amendment in a way that would not provide these students with what the General Assembly was pretty clearly desiring to do,” Ratner said.

He added: “I thought that budget amendment was pretty clear. VDOE had a different interpretation to it, and it seems to me that in response to the VDOE’s interpretation, that the General Assembly acted again to say, ‘No, we meant what we said the first time.”

Bell, who initially proposed the move, said he also fielded calls from caregivers like Smith who were unsuccessfully trying to get their adult students back in their private day centers for a continuation of their services. He said he hopes this language change will work.

“Certainly, the intention is this additional language will enable those students to receive the extra year that they lost because of COVID,” Bell said. “Losing that year really makes it hard for them and their families. ... We are all hopeful that this will enable them to make that transition more successfully.”

After Jackson’s story was published, Prince Edward County gave him some time at the Faison Center, but not enough, Smith said.

Without a full year of full-time instruction, Smith worries that a transition to an adult program for Jackson would prove difficult.

Ruth Williamson, the coordinator of special education for Prince Edward County Public Schools, said the county was awaiting revised guidance from the VDOE.

Catherine Smith says grandson T.Q. Jackson, who has autism, lost a year of learning during the pandemic. Jackson, who lives in Prince Edward County, attended the Faison Center in Richmond. A legislative revision could mean full-time tuition to the school.

T.Q. Jackson plays video games as his grandmother Catherine Smith looks at her phone. Smith says attending a local high school wouldn’t be conducive for him.