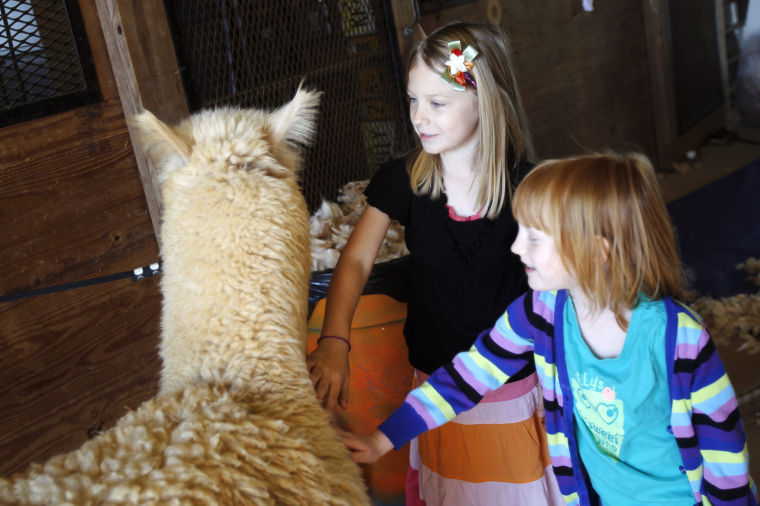 Sofia Vanderark (left), 6, of Forest, and her cousin, Isla Whitener, 5, of Evington, pet Alfredo at A Goode View Alpaca Farm in Goode. 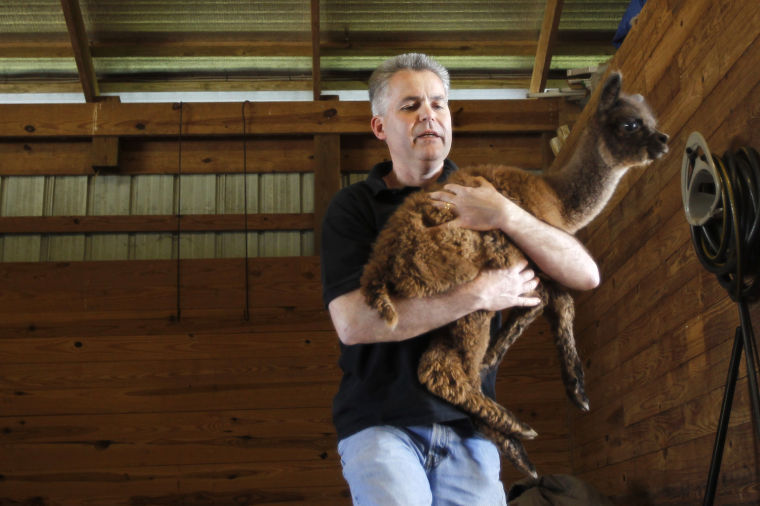 James Beck holds one-week-old Priscilla while her mother is sheared at his farm, A Goode View Alpaca Farm, in Goode. 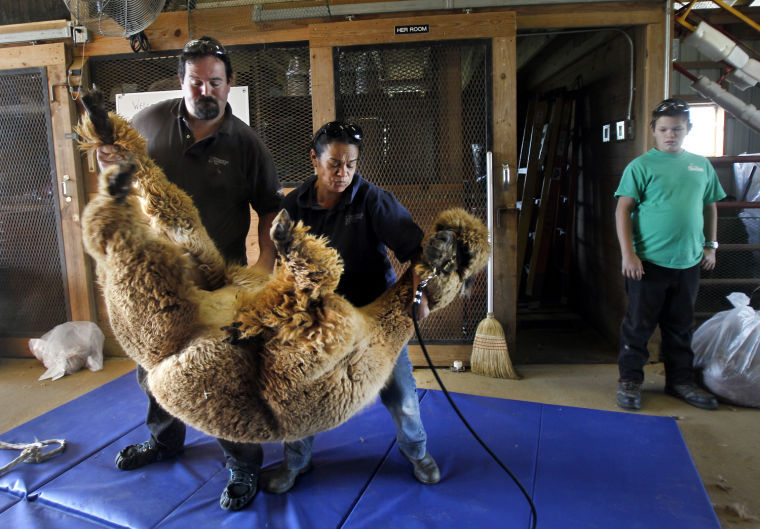 Trevor and Tania Gellaty of Australia gently lay Magnolia on a mat while their son, Ethan (right), 12, waits ready to help, at A Goode View Alpaca Farm in Goode. Trevor and Tania said they have sheared alpacas for 11 years, and sheep for over 20. They travel for three months out of the year to nine states to shear.

By Luanne Rife The Roanoke Times

BEDFORD — Vacquero did not go quietly to the shearing room floor. As the first of 15 alpaca to be parted with his fuzzy coat Friday morning at A Goode View Alpaca Farm, just east of Bedford, Vacquero squealed his unhappiness as the shearers lowered him to the thick mat.

He continued to cry as his hooves were tied and the pulley system pulled the ropes taut.

As Trevor Gellaty swept the shears along Vacquero’s belly, working paths around his body to free him of his blanket, the alpaca continued to cry. Gellaty’s 12-year-old son, Ethan, held onto Vacquero’s ears, moving his head this way and that under his father’s commands, while his wife, Tania, scooped the fiber into clear plastic bags labeled with Vacquero’s name.

Soon enough Vacquero was freed, quickly rising to his feet, a mere slip of an animal compared with his former fuzzy substantial self. Someone joked: If only we, too, could shed our winter padding so easily.

Vacquero is just one of James and Lisa Beck’s growing herd of alpacas. Visitors to their farm, mostly moms with young children, had come out to watch the shearing. They didn’t know what to expect. Neither did the Becks when they decided to become alpaca farmers.

James Beck grew up in a tiny Philadelphia row house in a neighborhood where the only green was the few blades of grass that pushed themselves up from cracks in the concrete. Until a year and a half ago the couple lived in suburban Philadelphia with their son, who was nearing graduation from high school. James Beck always liked animals; Lisa Beck wasn’t so sure, as she just hadn’t been around them all that much. But they came to be charmed by alpacas, and while visiting the Pennsylvania Farm Show in Harrisburg they sat in on an Alpaca 101 seminar.

Beck turned to his wife one day and said they should buy a farm and raise alpacas. "She said, ‘you’re crazy,’?" he said. But off they went, looking at farms in Tennessee, Virginia and Pennsylvania.

On Mother’s Day two years ago, they put their house up for sale, sold it the same day and by Tuesday had made an offer on the Goode farm. They started out with six alpacas.

As of two Saturdays ago, when Priscilla was born, they were up to 17. They might have 18 by now as Magnolia was due to give birth any day. Last year’s shearing sent another very pregnant alpaca into labor.

The Becks had to take their alpacas to another farm last spring to be sheared, as they had too few to rate a visit by the shearers. The Gellatys of Australia come each year to the United States, traveling through nine states in three months, relieving alpacas of their coats.

Their hair is called fiber rather than fur or wool, and ranges in color from white to tan to brown to black. Alpacas look much like llamas but are smaller and better tempered. Their fiber is considered softer than angora, and warmer, lighter and less prickly than sheep’s wool.

Tania Gellaty was separating it by color, texture and grade. The blanket is of better quality than the leg fiber. Lisa Beck said she will wash and dry the fiber and then send the bags to a mill in New York where it will be spun into yarn and roving, a flat fabric used by felters.

The yarns and roving are sold in the farm’s store, along with scarves, gloves and plush animals made from alpaca fiber. Each skein of yarn is labeled with the name and photo of the alpaca who shed his fibers for it.

Though Vacquero made a noisy show of parting with his, the other alpacas didn’t seem to mind nearly as much. Some rolled onto their backs, exposing their bellies to be sheared with the eagerness of puppies wanting a belly rub.

Baby Priscilla anxiously watched her mom, then took a quick turn for her first shearing before running off to nestle beneath Niska, seeking comfort from suckling. The other, more seasoned alpacas, even Vacquero, calmly milled about.

RICHMOND, Va. (AP) — Police have given the all-clear after a search of two state office buildings in Virginia’s capital Friday prompted by a r…

Virginia cafe a finalist in U.S. Chamber of Commerce awards

WINCHESTER, Va. (AP) — Victoria Kidd said she is always humbled when thinking about the reputation that her Hideaway Cafe has earned since ope…

Sofia Vanderark (left), 6, of Forest, and her cousin, Isla Whitener, 5, of Evington, pet Alfredo at A Goode View Alpaca Farm in Goode.

James Beck holds one-week-old Priscilla while her mother is sheared at his farm, A Goode View Alpaca Farm, in Goode.

Trevor and Tania Gellaty of Australia gently lay Magnolia on a mat while their son, Ethan (right), 12, waits ready to help, at A Goode View Alpaca Farm in Goode. Trevor and Tania said they have sheared alpacas for 11 years, and sheep for over 20. They travel for three months out of the year to nine states to shear.