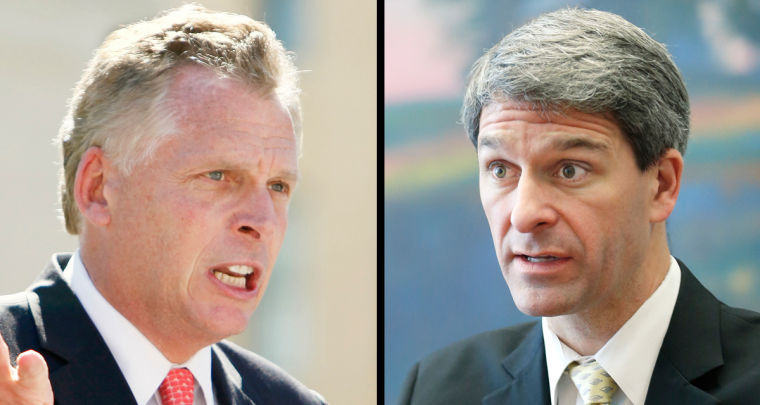 Republican Lt. Gov. Bill Bolling’s decision not to run as an independent candidate has clarified Virginia’s 2013 race for governor.

Virginia voters now have a choice between two very different candidates — Republican Ken Cuccinelli and Democrat Terry McAuliffe — who politically have about as much in common as a cat and a dog.

Cuccinelli, the Virginia attorney general and blunt-speaking tea party favorite, has come out against federal health care reform and the recent bipartisan state transportation agreement hammered out by Republican Gov. Bob McDonnell with the help of Democratic lawmakers.

A social conservative who opposes abortion and gay marriage, Cuccinelli has crusaded against government overreach and speaks of a return to the “first principles” of the Founding Fathers.

McAuliffe, the energetic McLean-based businessman and former chairman of the Democratic National Committee, is a best buddy of President Bill Clinton and has raised millions for President Barack Obama with a celebrity Rolodex.

A supporter of abortion rights and gay marriage, McAuliffe has been touting a business-friendly agenda and helped muster Democratic support for the McDonnelI transportation plan, while backing federal health care reform.

“The differences between McAuliffe and I are pretty clear,” Cuccinelli acknowledged in a brief interview Thursday after he spoke at CPAC, the annual confab of political conservatives.

“I haven’t found a major policy area that we agree on yet. But even that — I’m sure something will come up.”

Coming from different places presents different challenges to each man charting a path to victory in November.

Here’s a look at three areas McAuliffe and Cuccinelli need to address to increase their chances of taking the Executive Mansion in November.

Can you hear me now?

McAuliffe needs to expand the Democratic electorate so that it looks more like that of 2008 and 2012 than that of 2009, when Republicans swept all statewide offices by wide margins, said Quentin Kidd, professor of government and Director of the Wasson Center for Public Policy at Christopher Newport University.

“The lower the turnout goes, the better chance Cuccinelli has,” agreed Sabato, referencing the 40 percent turnout in the GOP statewide sweep of 2009. McAuliffe, he said, needs to persuade Obama’s vote operation to “turn over the recipe” it used to target likely Democratic voters for the last presidential election.

Cuccinelli, meanwhile, needs to “broaden his appeal beyond the tea party/red meat base that right now swoons over him,” said Kidd.

He said the attorney general has to find a way to convince would-be Bolling supporters, who hail from the more established wing of the GOP and may include some conservative Democrats, that he can be trusted.

Polling before Bolling’s withdrawal gave him roughly 13 to 15 percent of the statewide vote and McAuliffe a slight edge over Cuccinelli in a three-way race, but put McAuliffe and Cuccinelli in a dead heat when in a two-man matchup.

But Republican strategist Kate Obenshain said Cuccinelli needs to stay the course and simply expand his personal freedom and anti-government growth message to a broader constituency.

“The hand-wringers who say he has to remake himself forget this is the guy who has won election to the state Senate from Fairfax, and statewide as attorney general as a smart, savvy, yet outspoken conservative.”

Money can buy you love

Cuccinelli needs to equalize McAuliffe’s advantages on money as a master fundraiser.

“McAuliffe knows every rich Democrat and independent in the continental United States, plus many abroad,” said Sabato.

“If Cuccinelli doesn’t work very hard — or get some giant, multimillion-dollar gifts from conservative sources — he could fall well behind in the money chase, and therefore in the TV ad war and voter contact game.”

McAuliffe, meanwhile, is going to need all the money he can get, both to raise his profile and to drive turnout in an off-year election that was not kind to Democrats four years ago.

“He has been running for governor for nearly five years now, but only 25 percent of Virginia voters know anything about him,” Kidd said of McAuliffe.

“The process of doing this will likely draw some of those people who would otherwise have supported Bolling to him.”

Experts say this could be the most critical factor in deciding which half of the Odd Couple claims the Executive Mansion in November.

“If Cuccinelli can define McAuliffe as just an ambitious interloper whose main achievement has been to be Bill Clinton’s big-money bagman, the Republican will be well on his way to victory,” said Sabato.

But the political footing is just as treacherous for Cuccinelli.

“If we get to November and he’s primarily seen as a guy who’s going to spend four years crusading against abortion, gay rights and climate change, he’s a dead duck,” Sabato added.

He said McAuliffe needs to “stay focused on an economic and jobs message” to fend off Cuccinelli attacks on his days at the DNC and the suggestion that he is a “Johnny-come-lately” to Virginia politics.

And Cuccinelli, said Kidd, needs to stay away from “the shiny objects out there” — namely, social issues — and also focus on jobs and the economy.

Democratic strategist Paul Goldman said both candidates may be stronger attacking the other guy than promoting their own virtues.

“They are both flawed candidates,” said Goldman, a former chairman of the Democratic Party of Virginia who has worked with both McAuliffe and Cuccinelli on public policy projects.

He said the political views and backgrounds of both candidates are “pushing the envelope in terms of what Virginia has traditionally accepted in their governance.”

And he said both men need to have an honest conversation with their staffs fairly soon about how much energy to devote both the positive and negative aspects of their campaign.

“Both guys have to realize that the only reason they have a chance of winning is because of the other guy,” said Goldman, who predicted the most negative race the commonwealth has seen in the past two generations.

For now, at least there has been a limit to the personal attacks among the candidates. Cuccinelli was asked whether with all of his political differences with McAuliffe, there is anything that the two men may have in common.

“I have yet to find a human being that I don’t agree with on something,” he said. “And I’m sure that Terry McAuliffe is not going to be an exception to that. Concern for people — I’m sure he has plenty of that as well,” he added.

“But how we go about addressing the needs we have in Virginia has already been very different.”

“I’m for keeping Virginia as a right-to-work state, I’m for responsible off-shore drilling, and I believe we both share a commitment to Virginia,” said McAuliffe.

Obenshain said successful candidates in the commonwealth demonstrate the ability to connect with “hardworking Virginians. … That’s still the way to win in Virginia.”