Gil Harrington of Roanoke County said her daughter Morgan's room showed so many aspects of personality, especially with the shoes that sit near the window of her bedroom, ranging from peep-toe leopard print stilettos to high top Converse sneakers. Morgan disappeared in Charlottesville after leaving a rock concert on Oct. 17, 2009, when she was 20-years-old and a student at Virginia Tech. Her death was ruled a homicide and the case remains unsolved. 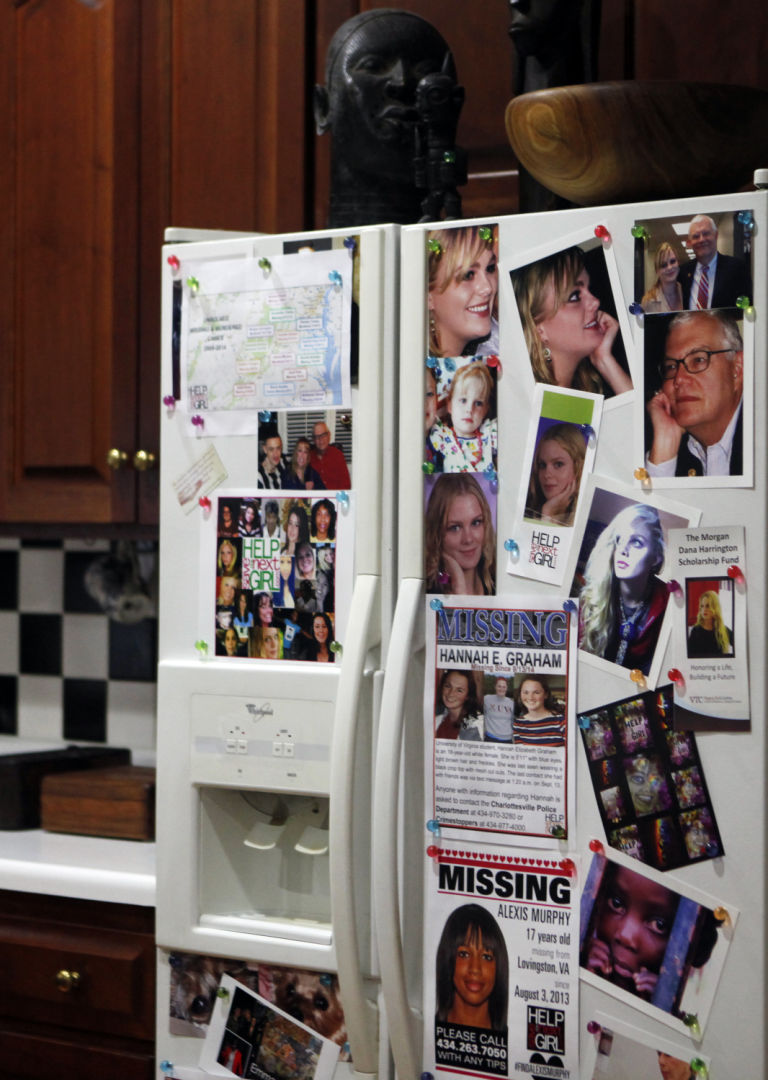 Gil Harrington of Roanoke County, and her husband, Dan, keeping the memory of their daughter, Morgan, alive in so many ways. Photos of Morgan cover the doors of their refrigerator. Morgan disappeared in Charlottesville after leaving a rock concert on Oct. 17, 2009, when she was 20-years-old and a student at Virginia Tech. Her death was ruled a homicide and the case remains unsolved.

By Duncan Adams The Roanoke Times

Gil and Dan Harrington believe that nearly five years ago in Charlottesville Jesse Leroy Matthew Jr. played a role in the loss of their lively, lovely, giving and creative 20-year-old daughter.

They believe Matthew — a suspect in the apparent abduction last month of another young woman described as full of promise — was involved in robbing them, her brother, her many friends and the world of Morgan Harrington's immense potential.

"When Morgan was killed she was at the top of her game," Gil Harrington said Friday during an interview at the family's home in north Roanoke County.

"It's sad that Morgan was taken at the time of her full flowering. But I'm glad we got a chance to see it," she said.

Gil Harrington, an oncology nurse, has never shied away from describing the ragged grief that haunts parents after losing a child to a violent death. She said she feels a responsibility to authentically name that pain, believing candor can help others cope with the reality that death, even from natural causes, ultimately claims everyone.

"If we can endure through catastrophic loss, perhaps they can see their way through whatever losses they suffer," she said.

And she and Dan have said the key reason they have continued to endure and sometimes invite media attention is their wish that young women and their parents can avoid the fate their family has endured.

The phone rang repeatedly during Friday's interview at the Harringtons' home, which brims with art, some of it created by Morgan. Gil Harrington acknowledged that the callers were likely reporters seeking comment about news reports that Matthew might have been driving a cab in Charlottesville the night Morgan disappeared.

She said it made sense to her that Morgan would have felt comfortable getting into a taxi in a community the junior at Virginia Tech was visiting and did not know well.

Harrington emphasized Friday that Matthew, 32, has not been charged to date in connection to her daughter's case.

"We are relieved that he is in custody and anxiously await further developments from law enforcement," she said.

Morgan disappeared on Oct. 17, 2009, after briefly attending a rock concert at the University of Virginia's John Paul Jones Arena. Her skeletal remains were found about three months later in a field at an Albemarle County farm. Her death was ruled a homicide.

Matthew, a resident of Albemarle County, is a suspect in the disappearance of Hannah Graham, 18. Police have said they believe Matthew abducted the second-year student at the University of Virginia on Sept. 13 after encountering her on the downtown mall in Charlottesville. Matthew remains jailed on a felony abduction charge. And the search for Graham continues.

Police have reported that they have established a forensic link between Matthew and Morgan Harrington's case but have not provided a description of that link.

"We're not in a position right now to identify the type of forensic link or evidence," said Corrine Geller, a spokeswoman for the Virginia State Police.

Investigators announced in July 2010 that forensic evidence established a tie between an abduction and sexual assault in Fairfax in 2005 and Morgan Harrington's case. They have since acknowledged that the link was DNA-based.

Geller said state police have not yet announced whether there is a forensic link tying Matthew to the Fairfax case.

And Geller said authorities would not comment about news reports that have suggested Matthew was driving a cab the night Morgan Harrington disappeared and that some of Matthew's co-workers had teased him about his resemblance to a composite sketch of the man suspected in the Fairfax assault.

"Because this is an ongoing criminal investigation, we are not commenting any further about the Morgan Harrington investigation — beyond the statements already released to date," Geller said.

Gil Harrington guessed that people who might have suspected Matthew before in connection with Morgan's case but had not come forward to share their suspicions with police were likely silenced by denial.

"Maybe people don't want to believe that there is evil sitting at the table next to them," she said. "That's how predators hide in plain sight. They blend in."

She said she felt neither need nor desire to say anything to Matthew.

"I have no anger for him, because how can you be angry with a marauding bear? But you make darn sure that he's not around human beings," she said.

Revelations about missing young women and possible serial offenders lead many people to feel afraid and outraged, Harrington said, which helps explain the public obsession with cases like Morgan's and Alexis Murphy's and Hannah Graham's.

Murphy, 17, disappeared Aug. 3, 2013, in Nelson County. Her body has not been found but Randy Allen Taylor was found guilty in May of first-degree murder in the case. He was later sentenced to two life terms. The Harringtons have communicated with Alexis Murphy's family.

Gil Harrington said she and Dan have had some contact with Graham's parents, John and Sue Graham.

"We have spoken with them and they are lovely and very private people and it's a private journey," she said.

Morgan Harrington's bedroom provides a glimpse into her eclectic tastes in music, art and fashion. Shoes lined up on a dresser include leopard print stilettos, a Birkenstock clog, red Converse sneakers and black Gothic-style boots with stiletto heels.

Music posters or art pay homage to musicians or bands that include The Beatles, Bob Marley, Jerry Garcia, Eric Clapton, Simon and Garfunkel and Barry Manilow. One poster features the band Pantera.

Morgan wore a Pantera T-shirt the night she disappeared, which was also likely the time she was killed.

Gil Harrington said police have told them the cause of Morgan's death but said she is not at liberty to share that information. She said she believes Morgan died quickly.

If it turns out that Hannah Graham has suffered the same fate, does that mean the Harringtons' "Save the Next Girl" campaign has been in vain?

Harrington does not think so.

"I realized that we might not be able to stop a negative outcome but was determined to try like crazy, regardless," she said.

"For us, resistance rather than surrender was the right response," she said. "I know that we have awakened many young people to the risk of predatory danger and likely saved many through that dawning awareness."

Harrington's left wrist bears a tattoo of the numbers 241. Her emails feature the same numerical sequence.

She offered a translation: "I love you too much/Forever/And once more beyond forever."

The numbers became family shorthand, she said, for expressions of love and affection. And they were among the last words Morgan spoke to her mother.

"Morgan fixed her lipstick, then flipped up the visor mirror and smiled as she leaned out to say, '241, Mama,' and then drove out of our lives."

Omar asks for just policing in wake of Wright's death

Omar asks for just policing in wake of Wright's death

Clashes in Northern Ireland after protests over Brexit 'protocol'

Clashes in Northern Ireland after protests over Brexit 'protocol'

Gil Harrington of Roanoke County said her daughter Morgan's room showed so many aspects of personality, especially with the shoes that sit near the window of her bedroom, ranging from peep-toe leopard print stilettos to high top Converse sneakers. Morgan disappeared in Charlottesville after leaving a rock concert on Oct. 17, 2009, when she was 20-years-old and a student at Virginia Tech. Her death was ruled a homicide and the case remains unsolved.

Gil Harrington of Roanoke County, and her husband, Dan, keeping the memory of their daughter, Morgan, alive in so many ways. Photos of Morgan cover the doors of their refrigerator. Morgan disappeared in Charlottesville after leaving a rock concert on Oct. 17, 2009, when she was 20-years-old and a student at Virginia Tech. Her death was ruled a homicide and the case remains unsolved.