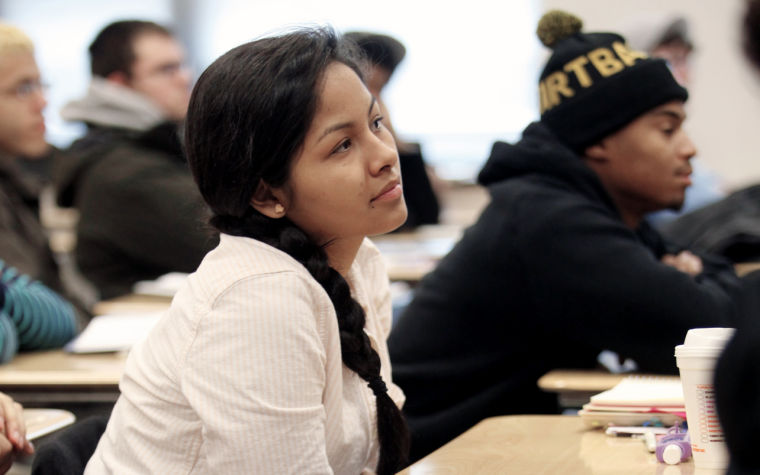 Ambar Pinto, 19, of Fairfax pays up to $2,500 per credit per semester at a community college in Northern Virginia because, as an undocumented immigrant, she doesn’t quality for in-state tuition. 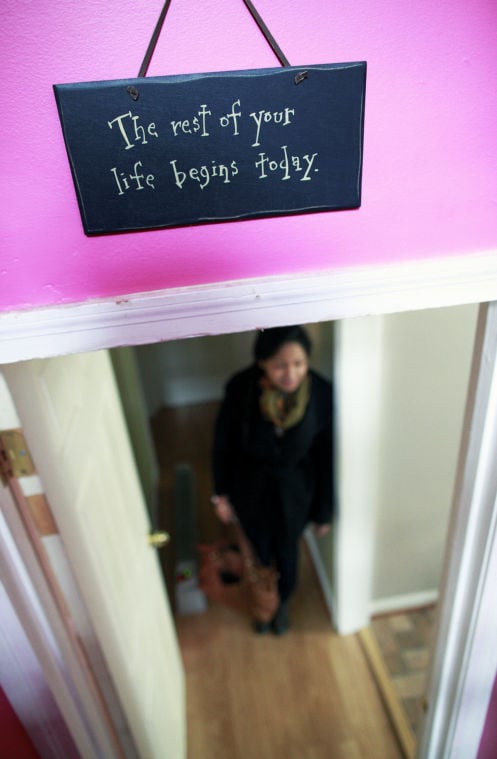 Ambar Pinto talks with her father before leaving for class. Originally from Bolivia, she has lived in the United States since the age of 12.

Ambar Pinto is a young Virginian with big dreams. She’s smart, articulate and ambitious. After college, she plans to run her own hotel. And later, add a chain of boutiques all over the country.

First, the 19-year old from Fairfax County needs a degree in international business. But an Ivy League school is out of reach for Pinto. She is an undocumented immigrant who does not qualify for in-state tuition.

“I love Virginia, and I want to contribute to my community. But I can’t get credit, I can’t apply for any benefits and I can’t afford to pay that much tuition,” she said.

Pinto takes classes at Northern Virginia Community College, where she says she pays up to $2,500 per semester. Her only hope to expedite her education and make it affordable at the same time is immigration reform.

But Pinto and many other undocumented immigrants in Virginia — most of them Latinos — have some allies in the General Assembly who believe that such reform is imminent.

One of them, Del. Alfonso H. Lopez, D-Arlington, is spearheading a bipartisan effort in the House to pass legislation that would allow eligible students to get in-state tuition. The Lopez proposals essentially are inspired by the federal Development, Relief, and Education for Alien Minors Act, or DREAM Act, which has languished in Congress for years.

“We have a duty in Virginia to educate all children K through 12. We have a duty to invest in them,” Lopez said. “But we pay for them until 12th grade and then we tell them they can’t go further.”

Lopez was elected to the House of Delegates in 2011. The DREAM Act was the first bill he introduced in 2012 — but the measure wasn’t even heard on the subcommittee level. Lopez said he made a promise that he would keep trying until the bill passes.

The renewed push in Virginia comes as President Barack Obama prepares to launch a new bid to overhaul the nation’s immigration system.

It also comes in the aftermath of a 2012 presidential election in which Obama again carried this increasingly diverse state. Obama carried 64 percent of the Hispanic vote in Virginia and 66 percent of the Asian vote, according to exit polls reported by The New York Times.

When Obama announced in June that his administration would stop deporting young illegal immigrants who meet certain criteria previously proposed under the DREAM Act, Lopez and his supporters saw it as a sign of hope.

Virginia wouldn’t be the first state to take on this issue. In November, the Maryland DREAM Act was approved by statewide ballot, winning 59 percent of the vote. Other states that have passed similar legislation are Texas, California, Illinois, Utah, Nebraska, Kansas, New Mexico, New York, Washington, Wisconsin and Massachusetts.

This year, Lopez has introduced two almost identical measures, House Bills 1934 and 2159. Both would provide in-state college tuition to undocumented students as long as they graduated from a Virginia high school, have lived in the state for at least three years, and have parents who have paid taxes here for the same amount of time.

Applicants also have to sign an affidavit that they have begun the process of becoming a permanent legal resident and are in the process of applying to an institution of higher education. “My bills are very high-bar,” Lopez said.

Similar proposals were put forth by Del. L. Kaye Kory, D-Fairfax, and Del. Thomas Davis Rust, R-Fairfax. Rust chairs the Higher Education subcommittee in which the House bills will be heard Wednesday.

Rust said he had previously opposed the DREAM Act because college-educated immigrants that were undocumented were not permitted to work in the United States.

“Before, you couldn’t get a job, so why would we continue to invest money?” Rust said.

The president’s announcement in June to not enforce deportation and the implementation of the Deferred Action Childhood Arrivals Act (DACA) changed the rules, Rust said. “Now these students are allowed to work if they go through the procedure,” he said.

Nationwide, 355,889 students have been approved under DACA as of December, among them 5,886 from Virginia, according to Virginia New Majority, a progressive nonprofit organization.

Deferred Action recipients must not be over 31, have been under 16 when they arrived in the U.S., lived here for at least five years and be enrolled in school. They also may qualify if have graduated from high school or obtained a General Educational Development certificate, or if they are an honorably discharged veteran of the Coast Guard or U.S. armed forces.

People seeking Deferred Action must not have been convicted of a felony, significant misdemeanor, or three or more other misdemeanors, and must not “otherwise pose a threat to national security or public safety.” They are tolerated but not in lawful status while staying in the U.S., and they could still be deported based on Department of Homeland Security discretion.

In the state Senate, Sen. A. Donald McEachin, D-Henrico, has introduced Senate Bill 1090, which is almost identical to the Lopez bill but requires eligible students to have been approved under DACA. The bill has been assigned to a Senate Education subcommittee on higher education, which meets Tuesday.

“Many of these people were brought here by their parents, through no fault or choice of their own, when they were very young. They want to stay in Virginia and contribute to the communities where they’ve lived for almost all their lives,” McEachin said. “We need to give them a chance to be valuable, contributing members of our society. Education is by far the best way to do that.”

Pinto is such a student. She came to the United States with her family seven years ago from Bolivia, when she was 12, using counterfeit visas. They moved to Arlington County, then to Fairfax. Pinto has two brothers; the youngest was born in Virginia. Her father has worked in construction, among other jobs.

“Virginia is where I was raised, where I matured,” she said in fluent English. “Living here has helped me find myself and become a better person. I love the freedom and opportunity, and I want to make a positive contribution to my community.”

Republicans in the General Assembly have traditionally opposed Democratic efforts to implement the DREAM Act in Virginia. Last year, Del. Benjamin L. Cline, R-Rockbridge, introduced a measure that would have cut off all access for undocumented students to any institutions of higher learning in Virginia. But his proposal was killed with the ill-fated Lopez bill.

Cline said on Thursday that he was concerned with the availability of slots at the state’s public universities for Virginia students and that he wanted to maximize this availability for in-state students. “We fought very hard to do that,” he said.

Cline also said that Virginia’s universities are available to students from all over the world, but those who receive the in-state tuition benefit are asked to provide proof of citizenship by almost all universities.

“I just seek to evenly apply existing policy to the remainder of those universities that don’t specifically require that,” he said.

However, supporters of the DREAM Act believe financing higher education for undocumented immigrants is going to pay off.

The Commonwealth Institute for Fiscal Analysis has conducted studies of returns of investment in college education in Virginia as well as the economic contributions of immigrants.

If the measure again fails, immigrants can only hope for federal action. In the meantime, students like Pinto work two or more jobs to pay for their out-of-state tuition.

GENERAL ASSEMBLY COVERAGE: Follow the latest news and updates from the 2013 session of Virginia's General Assembly.

Two Virginians guests at State of the Union

Meet Ambar Pinto, an undocumented immigrant who is studying business in Northern Virginia.

Ambar Pinto, 19, of Fairfax pays up to $2,500 per credit per semester at a community college in Northern Virginia because, as an undocumented immigrant, she doesn’t quality for in-state tuition.

Ambar Pinto talks with her father before leaving for class. Originally from Bolivia, she has lived in the United States since the age of 12.