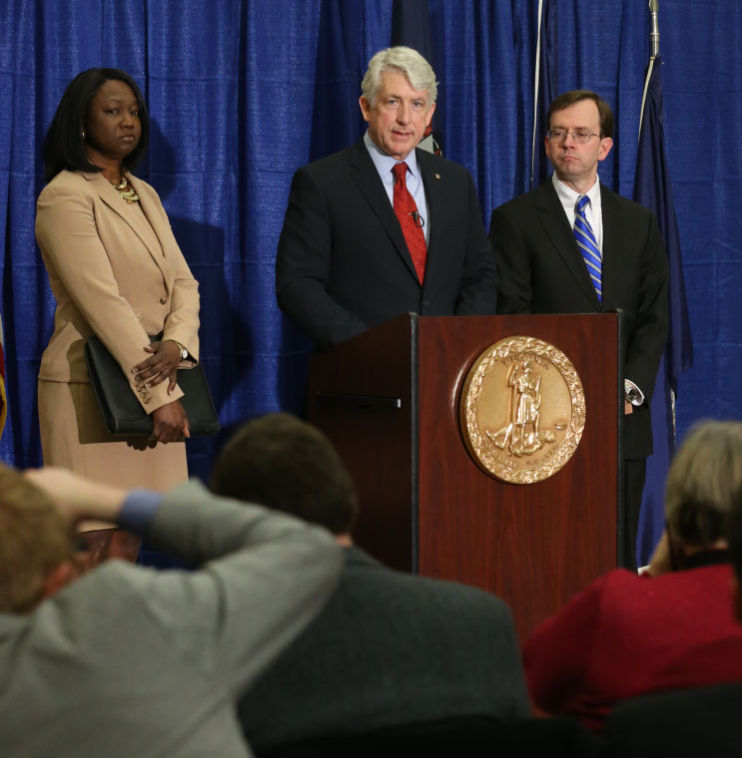 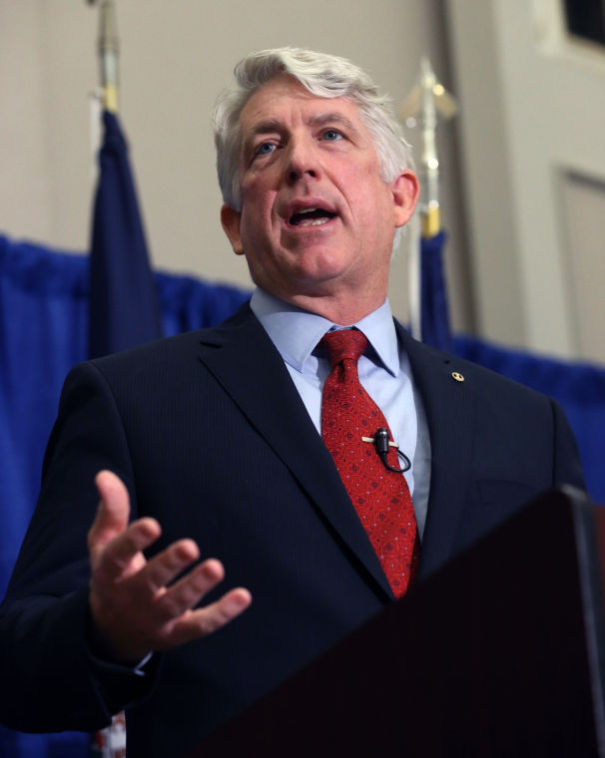 Virginia Attorney General Mark Herring speaks at a news conference at his office, Thursday, Jan. 23, 2014, in Richmond, Va., where he stated he has changed his position on the marriage equality case and now supports gay marriage. Herring said he has concluded that the state's ban on gay marriage is unconstitutional, and on Thursday he joined a lawsuit challenging it.

New Attorney General Mark R. Herring, saying that Virginia must be “on the right side of history,” asserted Thursday that Virginia’s ban on same-sex marriage is unconstitutional, but Republican opponents said he has a duty to defend the state law in court.

“Virginia has argued on the wrong side of some of our nation’s landmark cases — in school desegregation in 1954, on interracial marriage in the 1967 Loving decision and in 1996 (on) opening Virginia Military Institute to female cadets,” Herring said at the Attorney General’s Office.

“Less than two weeks ago, Mark Herring took an oath and swore to preserve, protect and defend the Constitution of Virginia,” Howell said. “I am very concerned about his announcement today and the dangerous precedent it sets with regard to the rule of law.”

“Virginia voters put this provision in the constitution, and no politician should be able to reverse the people’s decision,” they said in a statement. “We call on the attorney general to do the job he was elected to perform, which is to defend the state laws he agrees with, as well as those state laws with which he personally disagrees.”

Currently, 17 states and the District of Columbia allow gay couples to marry.

Gov. Terry McAuliffe, a Democrat, “supports the attorney general’s conclusion and his efforts to ensure that all Virginians are treated equally under the law,” said Brian Coy, a spokesman for the governor.

“As this case moves forward, the governor will continue to uphold his responsibility to execute the laws we have on the books,” Coy said.

Herring’s announcement came one week before a hearing in U.S. District Court for the Eastern District of Virginia in the case of two same-sex couples suing to overturn Virginia’s 2006 constitutional amendment that defines marriage as between a man and a woman.

The two couples — Timothy Bostic and Tony C. London of Norfolk and Mary Townley and Carol Schall of Chesterfield County — filed the suit after Bostic and London were denied a marriage license by their local circuit court clerk. The men sought the license shortly after the U.S. Supreme Court struck down parts of the federal Defense of Marriage Act in June. Their case is known as Bostic v. Rainey.

On Thursday, Herring said that he has notified the federal court in Norfolk of the change in Virginia’s position in the case.

“These two couples want Virginia to recognize their love and commitment,” Herring said. “From that recognition, they would derive benefits, (including) hospital visitation, basic parental rights and clear survivor benefits.”

Herring’s decision marks a dramatic shift in the position of Virginia’s attorney general on the issue. Former Attorney General Ken Cuccinelli, a Republican who left office Jan. 11, believes marriage should be between a man and a woman and supports Virginia’s ban on same-sex marriage.

It is also a departure from Herring’s previous position on the issue. While serving as a state senator from Loudoun County in 2006, he voted for the amendment banning same-sex marriage. He said his views have changed.

While Herring’s announcement does not overturn Virginia’s same-sex marriage ban, it will show the state’s position until the courts adjudicate the matter, he said.

“I think it’s important and significant for the parties to the case and those Virginians who are currently being denied the right to marry and all Virginians to know that their attorney general is on the side of the law,” Herring said.

Civil liberties groups and conservatives clashed Thursday over whether Herring’s move follows or violates the constitution.

Obenshain, whom Herring narrowly defeated for attorney general, said Herring has a duty to defend the state law while courts resolve the issue.

“Virginians, like millions of others across the country, are engaged in a robust debate over marriage, one that speaks to an important unresolved constitutional issue,” he said.

“Fair-minded people disagree on the issue of gay marriage, but this is, fundamentally, about the rule of law and allowing the system to work,” Obenshain said.

Pat Mullins, the chairman of the Virginia GOP, called for Herring’s resignation.

“It took Mark Herring less than a month to decide he doesn’t want to be Virginia’s attorney general,” Mullins said.

“Attorneys don’t get to choose whether or not they will defend their clients,” he said. “Indeed, lawyers have a duty to select their clients carefully, because they are ethically bound to represent the claims of their clients, good or bad.”

Del. Robert G. Marshall, R-Prince William, who sponsored the 2006 amendment, said Herring took an oath to uphold the constitution, not attack it.

“He has completely reversed himself on what he was supposed to do,” Marshall said.

Victoria Cobb, the president of the Family Foundation of Virginia, said: “It’s frightening that politicians like the attorney general feel that they can pick and choose which aspects of the constitution they deem worthy to defend and apply.”

She added: “Whether one agrees with the marriage amendment or not, the idea that over a million Virginia citizens can be left defenseless by the attorney general after legally voting for an amendment that he himself supported is chilling.”

But Bill Harrison, the executive director of the Richmond Gay Community Foundation, applauded Herring’s decision, saying that the new attorney general is doing his job.

“It is his responsibility to point out Virginia laws that are unconstitutional,” Harrison said. “The Supreme Court of the United States has ruled on this, and he is following their decision.”

Theodore B. Olson, the plaintiffs’ co-counsel in Bostic v. Rainey, said Herring has “brought Virginia that much closer to the quintessential American ideals of equality under the law and the freedom to pursue happiness.”

“We’re pleased to welcome the attorney general and the commonwealth to the right side of history, and we want to be sure that whatever happens next will result in a quick, clear and final decision affirming the freedom to marry for our clients and for all Virginians,” said Claire Guthrie Gastañaga, the group’s executive director.

On the merits, Attorney General Mark Herring is right about the state’s prohibition against gay marriage – a prohibition this newspaper has op…

• The Times-Dispatch applauds a federal judge’s decision in striking down the so-called marriage amendment. The case almost certainly will go …

Herring to back same-sex couples in Virginia

Virginia Attorney General Mark Herring speaks at a news conference at his office, Thursday, Jan. 23, 2014, in Richmond, Va., where he stated he has changed his position on the marriage equality case and now supports gay marriage. Herring said he has concluded that the state's ban on gay marriage is unconstitutional, and on Thursday he joined a lawsuit challenging it.