Same-sex couples marry as the unions become legal in Va.
0 comments
Share this
1 of 3 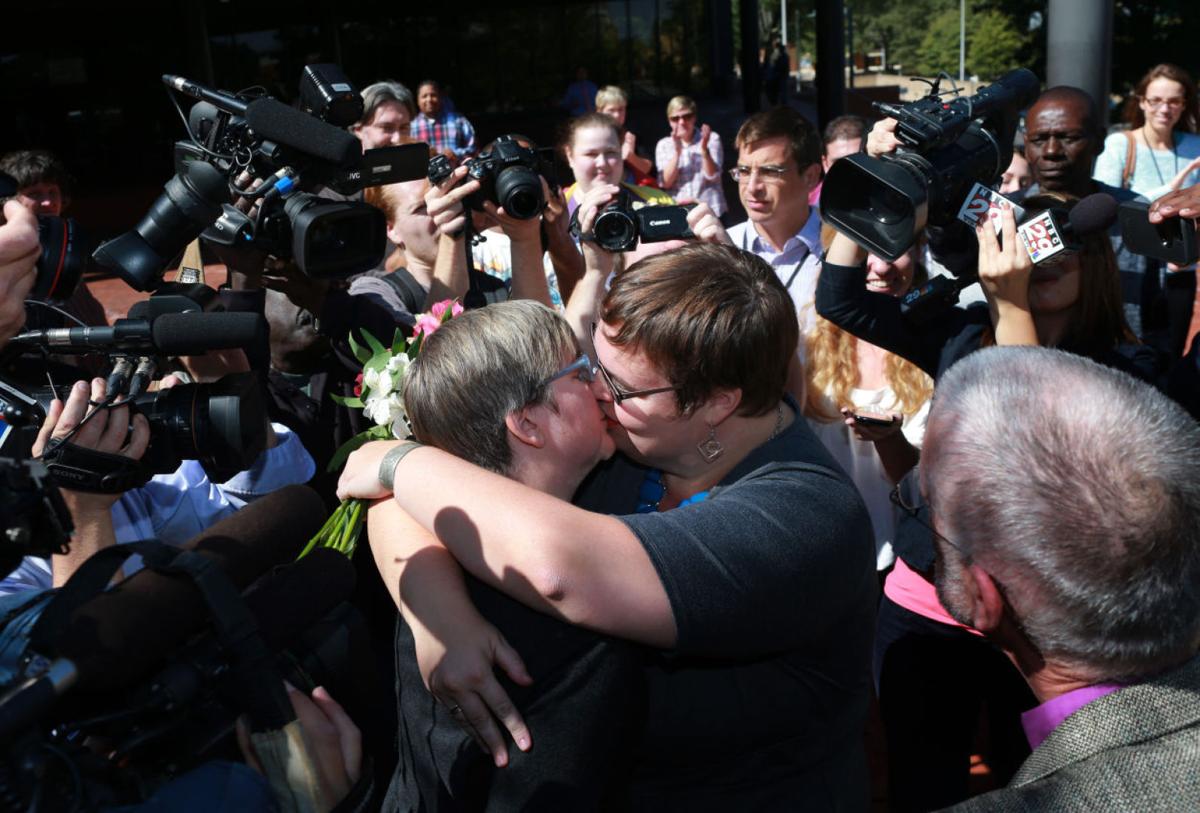 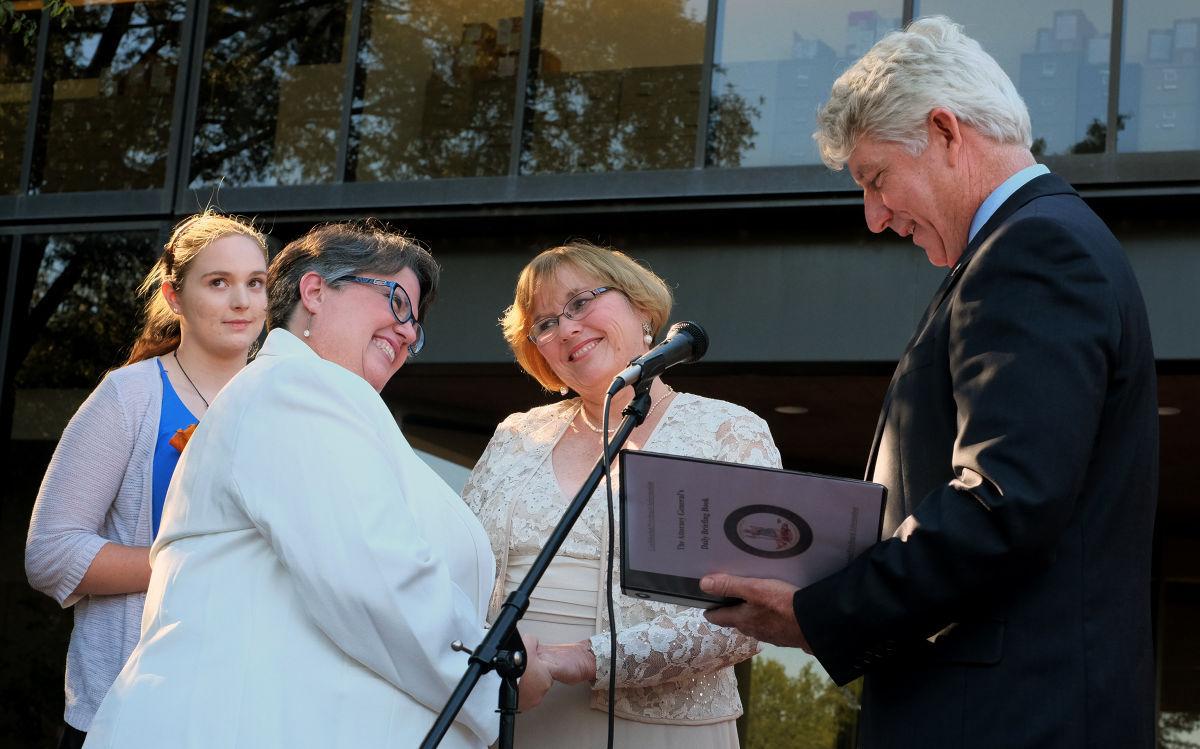 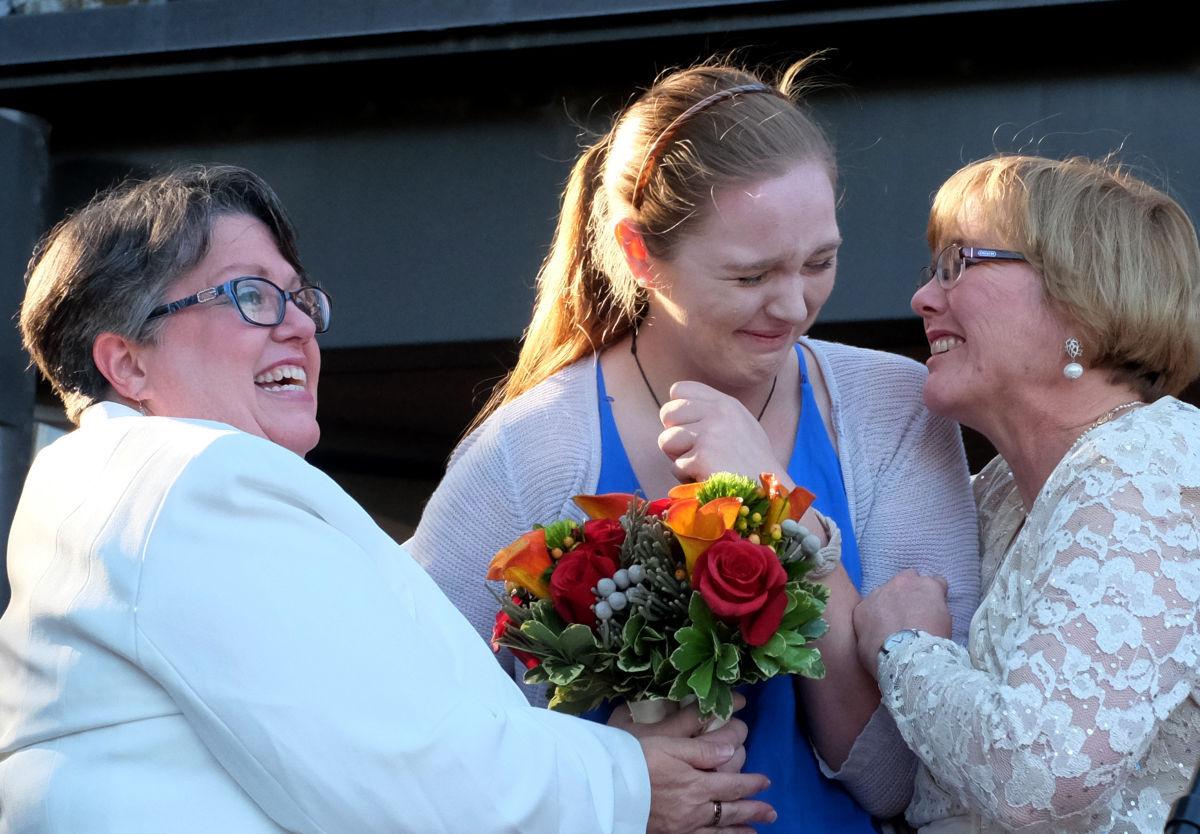 The U.S. Supreme Court cleared the way for same-sex marriage in Virginia and four other states Monday morning, and by afternoon, same-sex marriages were performed outside a number of courthouses around the state.

In Richmond, two women were first in line for their license and married outside the courthouse amid a throng of news media and well-wishers. Similar scenes played out from Arlington County to Norfolk, from Culpeper to Charlottesville.

The 4th U.S. Circuit Court of Appeals, which had heard Virginia’s case, lifted the last procedural bar by saying marriage licenses could be obtained, and unions officiated, after it issued a mandate at 1 p.m.

“You’re the first in line for Richmond,” Clerk of Court Edward F. Jewett told Nicole Pries, 42, and Lindsey Oliver, 30, of Richmond. Shortly after 1 p.m., they were issued their license, left amid cheers and were married outside the John Marshall Courts Building.

The change, which Gov. Terry McAuliffe and Attorney General Mark R. Herring described as “momentous,” came after the high court chose not to hear appeals from the 10th, 7th and 4th circuits that sought to keep bans on same-sex unions in place.

With the states added Monday, same-sex marriage will now be legal in 30 states and the District of Columbia, and it signals a broader move toward becoming the law nationwide. There are challenges to gay marriage bans in the other 20 states.

“What a momentous and joyous day for thousands of Virginians,” Herring said.

Added McAuliffe: “This is a historic and long-overdue moment for our commonwealth and our country.

“Virginia is already well-prepared to implement this historic decision. Going forward we will act quickly to continue to bring all of our policies and practices into compliance so that we can give marriages between same-sex partners the full faith and credit they deserve.”

Defenders of Virginia’s marriage amendment consider the fight far from over.

“The court’s decision not to take up this issue now means that the marriage battle will continue,” said Byron Babione, senior counsel with the Alliance Defending Freedom, which has argued for the gay marriage ban in federal court on behalf of Prince William County Circuit Court Clerk Michele B. McQuigg.

The Richmond City Council passed an ordinance last year to give spousal benefits to employees in gay marriages once gay marriage is legal in Virginia.

The city will fully comply with the ordinance immediately, said Michael Wallace, a city spokesman. “In addition, the city will begin reviewing and rewriting various documents relating to policies, rules and regulations to bring them into compliance.”

In Henrico County, Yvonne Smith, who has been clerk of court for 23 years, said her operation and others with which she’s familiar around the state have been prepared to issue marriage licenses since the matter of same-sex marriages went to the Supreme Court.

The court’s decision means that forms had to be created that did not differentiate between genders and those changes have been made, both in courts that use private vendors to supply the forms and those that are provided by the state Supreme Court, she said.

Jewett said immediately after the decision that he had been “scrambling” to determine the next step for his office, and had consulted with Herring. By the time Pries and Oliver arrived, he was able to greet them and confirm they were first in line.

Jewett said that among other issues, his office wanted to make sure that forms that were created in August are legally acceptable to use.

There was some confusion about 12:30 p.m. in Chesterfield County, when one same-sex couple was turned away when they were told officials had not yet received notice that licenses could be issued.

Shortly after 1:30 p.m., the clerk’s office received permission to proceed from the executive secretary of the Virginia Supreme Court on behalf of the 4th Circuit. The couple that had arrived earlier said they would return later in the day.

The U.S. Supreme Court’s decision came as a surprise, as many legal experts had expected that the justices would take on the same-sex marriage cases to settle the issue overall.

The 4th Circuit in July had upheld a ruling by a Norfolk federal judge overturning Virginia’s constitutional amendment defining marriage as between a man and a woman.

Theodore Olson, lead co-counsel in Bostic v. Rainey, the case seeking to overturn the ban, called the high court’s decision a “momentous victory for the constitutional promise of equality, dignity and justice for all Americans.”

Olson, who represents Timothy Bostic and Tony London, a gay couple from Norfolk that filed a suit in federal court last summer after being denied a marriage license, told reporters that the Supreme Court will ultimately grant same-sex couples all across the United States the same privilege to marry.

“This marriage equality movement is sweeping the U.S. very rapidly. It will be wonderful tomorrow to see pictures of same-sex couples getting married, and that is so gratifying. It’s the highlight of my life,” Olson said.

One of Olson’s clients, London, said he had been getting congratulatory calls all morning.

“When we started this, all we were concerned with was getting married. But that has changed — we became the face of marriage equality, and the excitement we feel today can’t be put into words. Now it’s just a matter of getting a marriage license. I’m so excited I can’t even talk,” he said.

London’s partner went back to the same circuit court clerk’s office Monday where they had been denied last year. This time, their application was approved.

Chesterfield County couple Carol Schall and Mary Townley, who also had signed on to the suit, had been married in California, but their union was not recognized in Virginia until the Supreme Court decision.

On Monday afternoon, Schall and Townley renewed their vows on the steps of the Richmond courthouse in a ceremony led by Herring. Their daughter, Emily, 16, cried tears of joy as her mothers embraced.

“One of the most important things for us as a family is that our daughter, Emily, can hold her head up high and say, ‘I have a family like your family,’ “ Townley said.

Victoria Cobb, president of the Family Foundation of Virginia, also said the issue of the legal definition of marriage is far from settled. “Most experts still believe the Supreme Court will eventually rule on this matter,” she said in a statement.

And William J. Howell, R-Stafford, speaker of the Virginia House of Delegates, renewed his call for “a clear and decisive resolution from the Supreme Court” in the debate over Virginia’s constitutional amendment defining marriage.

Even if a federal court decided to uphold a state’s gay marriage ban, and the court then decided to take up same-sex marriage, the justices would likely not affirm such a decision, University of Richmond law professor Carl Tobias said.

“If that was where it was headed, the court would have just waited. To overturn gay marriage later would make the court look foolish and create a legal mess in a number of states,” he said.

Del. Robert G. Marshall, the Prince William Republican who sponsored the 2006 marriage amendment, said the court’s decision disregards the “laws of nature and nature’s God,” and will “fundamentally compromise and seriously erode the bonds of allegiance by the most patriotic of citizens, to government at all levels because this is not the America of the Founders’ vision.”

In August, the Supreme Court stayed a ruling by a federal appeals court that would have allowed same-sex couples in Virginia to get married immediately. The justices granted an emergency request made by opponents of gay marriage, including McQuigg.

Lawyers for McQuigg said allowing same-sex couples to marry before a Supreme Court review could create “uncertainty for the public” and “irreparable injury to the commonwealth.”

The ACLU of Virginia and Lambda Legal also became part of the suit earlier this year on behalf of a class of all of Virginia’s same-sex couples.

“Now the U.S. Supreme Court’s action writes this denial of equality out of the Virginia Bill of Rights. George Mason would be applauding,” Gastañaga said.

James Parrish, executive director of the gay rights group Equality Virginia, said he was “overjoyed” to learn that lesbian and gay couples can now marry the person they love in the place they call home.

“After decades of work to change hearts and minds, the freedom to marry is now a reality. This is such an exciting and historic day, and we are thrilled for the thousands of couples whose relationships — and families — will now be recognized by the commonwealth of Virginia. This day will be celebrated for a long time to come,” he said.

The Supreme Court did not state a reason for the order to reject the gay marriage cases Monday. And the justices might still take on the issue if a federal court in a future challenge upholds a state’s gay marriage ban.