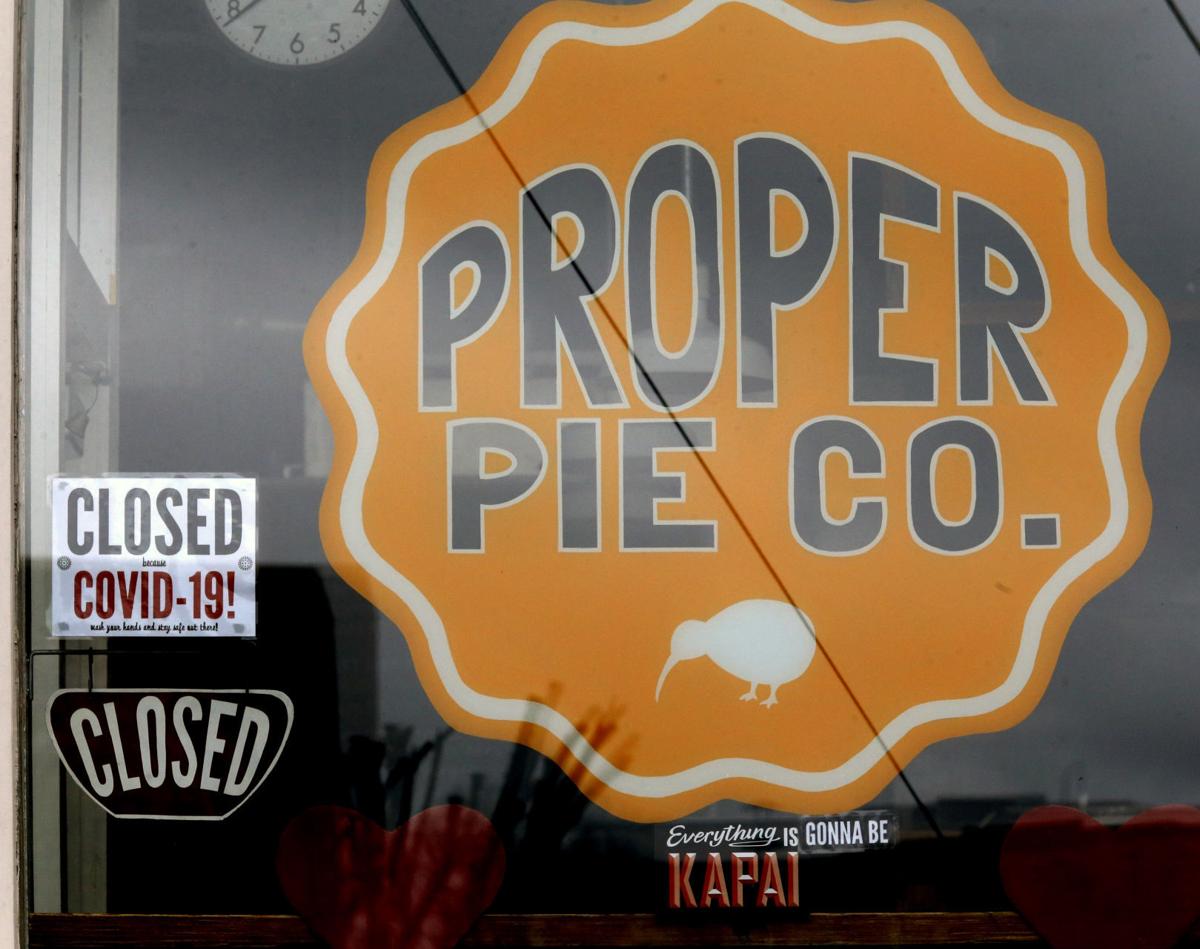 Signs in the window at Proper Pie Co. on Church Hill 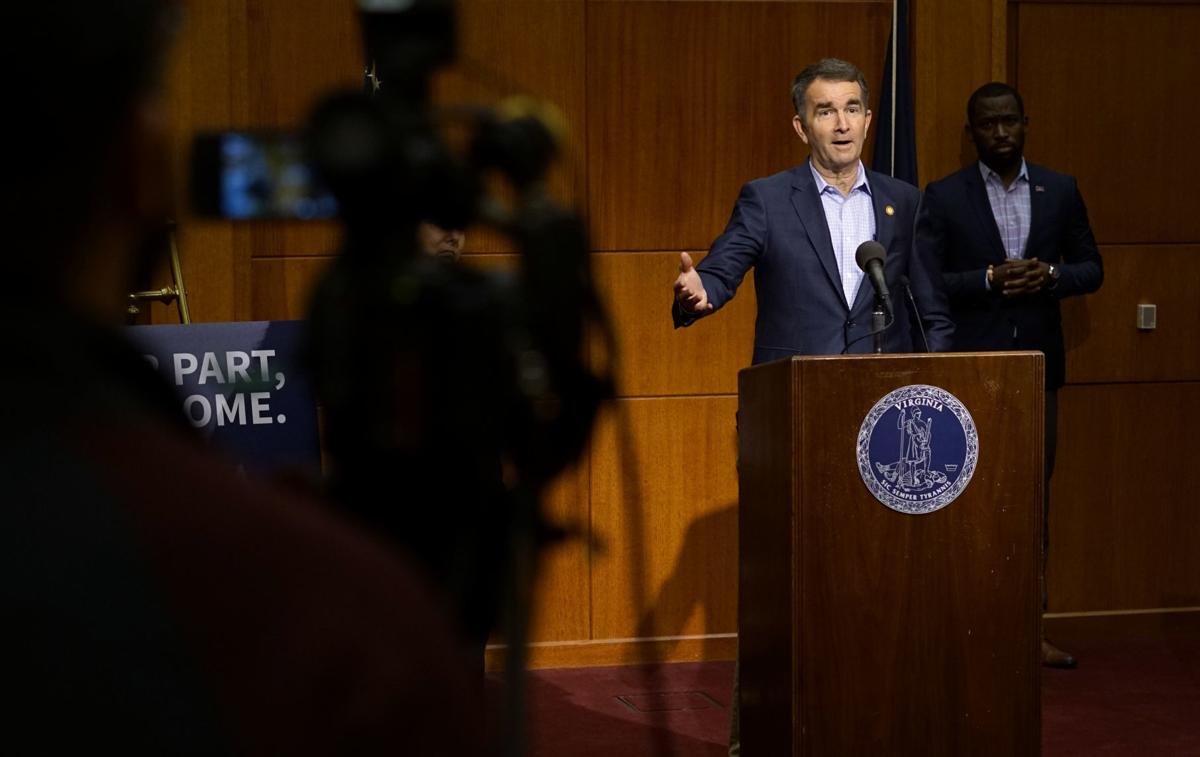 Va. Gov. Ralph Northam speaks a press conference in Richmond, Va. on Monday, March 23, 2020. The governor said Monday he is closing Virginia schools for the rest of the school year.

Signs in the window at Proper Pie Co. on Church Hill

Va. Gov. Ralph Northam speaks a press conference in Richmond, Va. on Monday, March 23, 2020. The governor said Monday he is closing Virginia schools for the rest of the school year.

The following recreation and entertainment businesses are considered nonessential and must close to the public beginning at 11:59 p.m. Tuesday, according to Gov. Ralph Northam:

All dining and congregation areas in the following establishments must close to the public beginning at 11:59 p.m. Tuesday. These establishments may continue to offer delivery and/or takeout services. Establishments include:

The following retail businesses are considered essential and may remain open during normal business hours:

For more information, go to www.governor.virginia.gov/media/governorvirginiagov/executive-actions.

Gov. Ralph Northam on Monday ordered all schools closed for the rest of the academic year, along with additional closings and restrictions for…

Phase One of reopening Virginia allows salons and patios to open; dining rooms and gyms must stay closed

Gov. Ralph Northam on Friday outlined his eagerly anticipated guidelines for Phase One of reopening Virginia, and the eased restrictions have …

If you are a corporation and make tires, paper, or material for license plates you may do as you see fit. You can sell cars, tobacco and alcohol because that is where the Governors money comes from. You can kill yourself and anyone else on the highway but for the Governors sake , do not die of natural causes. If anyone is doing as they are told, the Gov is. But who is he listening top? If he is making these decisions by his own mental capacity, we are in deep.....

dear readers: Are moving companies essential? No mention on VA government site. My move is scheduled for 4/23...

Janis Peace commenting: "There are more old drunks in the world so I think I'll have another beer"??? Obviously, it's very obvious what our Governor thinks is important. The last thing we need open, as essential, is the ABC Store. Of course, it's all about the money. The Governor doesn't really care if the ABC Store helps to spread germs from this virus. A lot of people who drink have reduced immune systems from the health problems the alcohol caused so why would you choose an ABC Store as essential. One reason is it all comes back once again to the money. So who really cares about the citizens?

Northam is pacifying the sheep before they are slaughtered.

Is life so dear, or peace so sweet, as to be purchased at the price of chains and slavery?

Forbid it, Almighty God! I know not what course others may take; but as for me, give me liberty or give me death!

Yep, if this gov is going to tell us how to live and die, I'm glad to be prime material for this virus. What M.D. would think being a politician would serve the people better?

500 dead in 3 months and we are on lock down, and the economy is in need of trillions of support. 3 months on our highways and 10,000 die and have every 3 months for a century.

Vegas need to be wagering that when this is over we will see a million dollars or more shoved into the economy, false, debt dollars, FOR EACH C-19 death. Of course, being mostly elder deaths, the US government could save a loooad on reduced SS and Medieverything payments.

To this date the only severe problem in Va. and the US has been the lock up, caused by politicians who could not have passed elementary math.

7 people in about a month, sure there will be more yet it will have to be multiplied many times to reach the 800 or so who die each year in Va. of a normal flu season.

As most of those who die are elderly, it is likely most of 500 would be part of the 2.8 million who die annually by all causes.

There has been little reporting of flu casualties of strains we vaccinate against, and still end with 50 to 60 thousand losses.

In Va. the Governor would not think about locking down for the 800 who die and 8,000 who are injured on highways. When all we would have to do is slow our travel just a bit.

But no, we are going to spend billions to keep traffic moving at a rate of 800 or so dead.

And they are generally much younger, without warning and the cost is enormous.

The hypocrisy of valuing death by natural disease but devaluing life to auto deaths is causing society to become callous to all death.

Ah, if we insured death by disease, as with autos, we just wouldn't mind so much.

Admittedly, I am not a fan of Gov. Northam for myriad reasons..............but I think his approach to this crisis has been fairly reasonable. He seems to understand the need to mitigate the spread of the virus, while trying to keep the basic supply chain open.

He deserves credit for trying to be reasonable here.

Northam isn't looking for a cure. That's genocide. The US will have 100,000 deaths before this is over.

Fred, what are you even trying to say? I know you don't believe that the Governor of Virginia would be the person looking for a cure. This is a national problem. The CDC will be looking for a cure. Different medical labs, pharmaceutical companies, etc. will be working towards a cure. Do you not know how the world operates?

He deserves to live as he expects of us, under the guidance of drunken shepherd.