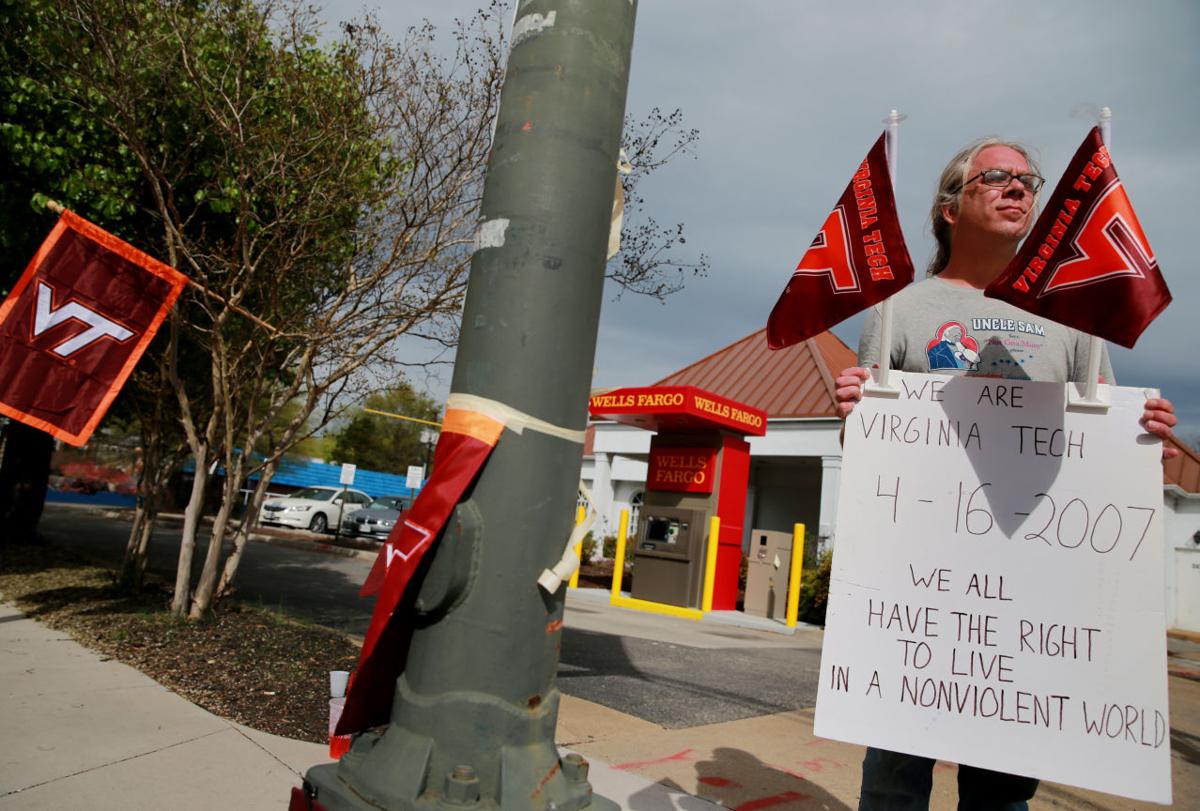 Jonathan Romans, a VCU graduate, of Richmond held a sign, 'WE ARE VIRGINIA TECH,' with Tech flags, which are dropped by a passerby, as he displayed a Virginia Tech memorial in Richmond on Thursday, April 16, 2015. 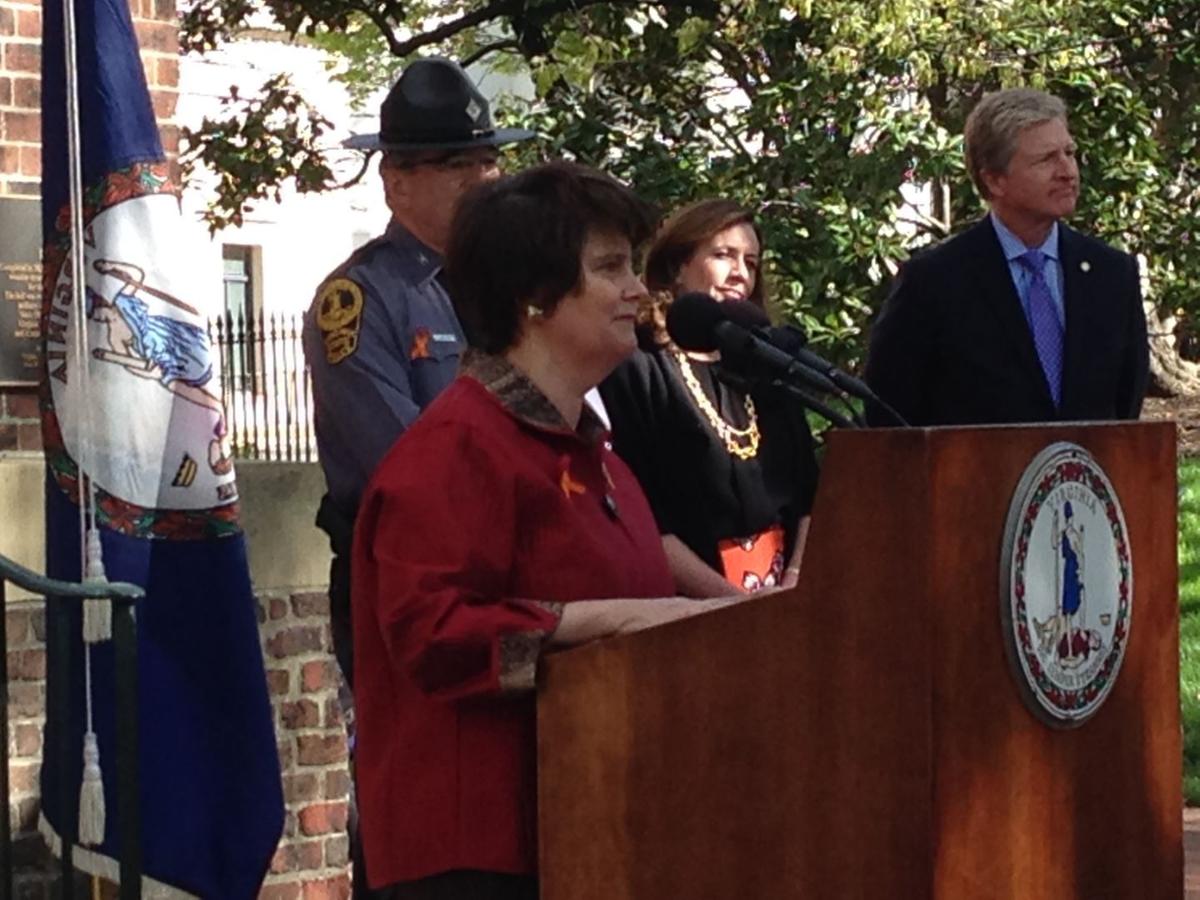 Family members, state officials and faith leaders gathered Thursday at Capitol Square in Richmond on Thursday in solemn recognition of the 32 students and faculty members killed eight years ago at Virginia Tech.

“We come to honor the memory of those who died, to hold in the light their families” and others affected by the tragedy of the nation’s worst mass shooting, said Secretary of Education Anne Holton.

Several hundred attended the brief ceremony held in front of the Bell Tower on a clear spring morning. Among them were family members of the slain and wounded and other Tech community members. Afterward they offered support to one another in quiet embrace and conversation.

They heard from Colin Goddard, a shooting survivor, Tech graduate and now senior policy advocate for Everytown for Gun Safety.

“This time eight years ago, I was on the floor of my French class,” Goddard said. “We all know where we were.”

He said that to remember those who were killed and wounded, and their friends, families and communities, is an important step toward recognition, healing and reform.

“To continue doing this each and every year means so much,” he said.

She praised Holton for the dedication she and her husband, then-Gov. Timothy M. Kaine, showed the victims. McAuliffe said the administration of her husband, Gov. Terry McAuliffe, is committed making campuses safe and reducing gun violence.

A similar tone was struck in Washington, where Kaine paid tribute on the Senate floor to the Tech community and called on Congress to pass comprehensive background-check legislation.

Kaine read the names of the 32 victims into the record and spoke about Goddard and Elita Habtu, another student who was shot and injured and is an advocate for tougher gun laws. Habtu, known as Lily, was in the Senate gallery.

“As we commemorate the shooting at Virginia Tech, honoring those we lost, honoring those brave survivors like Colin and Lily who are using their painful experiences to help others, honoring the resilience of the entire Hokie nation, it’s my hope that my colleagues will get serious about gun safety,” Kaine said.

“I am a gun owner, and I’m a proud supporter of the Second Amendment. But the time is long overdue for a comprehensive background check system that keeps weapons out of the hands of dangerous people like Seung-Hui Cho. And I look forward to the day when we will accomplish this and have a safer nation as a result.”

Statewide, a moment of silence was observed at 9:43 a.m., and commemorative events scheduled in Blacksburg included a community gathering on the Drillfield.

In Richmond, the Bell Tower memorial concluded with the superintendent of the Virginia State Police, Col. W. Steven Flaherty, reading the names of those killed. Each name was followed by a single bell toll.

“May we never forget,” Flaherty said.

TRENTON, N.J. (AP) — Ebele Azikiwe was in the sixth grade last year when February came and it was time to learn about Black history again. She…

RICHMOND, Va. (AP) — One of two police officers accused of pepper-spraying and pointing their guns at a Black Army officer during a traffic st…

WINSTON-SALEM, N.C. (AP) — A second lieutenant in the U.S. Army is suing two Virginia police officers over a traffic stop last December during…

Jonathan Romans, a VCU graduate, of Richmond held a sign, 'WE ARE VIRGINIA TECH,' with Tech flags, which are dropped by a passerby, as he displayed a Virginia Tech memorial in Richmond on Thursday, April 16, 2015.