By the numbers: Virginia has the most Confederate monuments, flags and other symbols in the nation
0 Comments
Share this
1 of 4 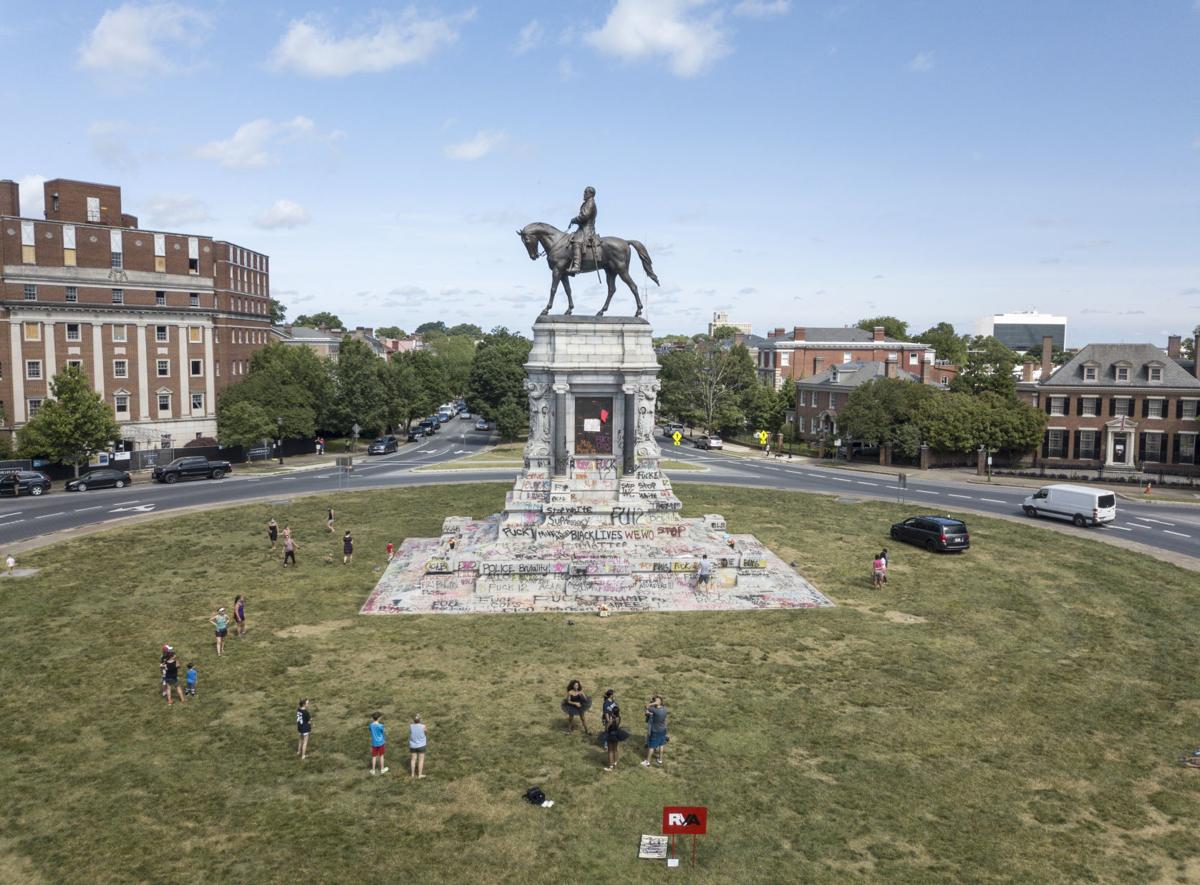 The statue of Robert E. Lee on Monument Avenue is among the Confederate memorials whose future remains unknown. Gov. Ralph Northam announced earlier this month that he wants the state-owned statue removed from the historic street. 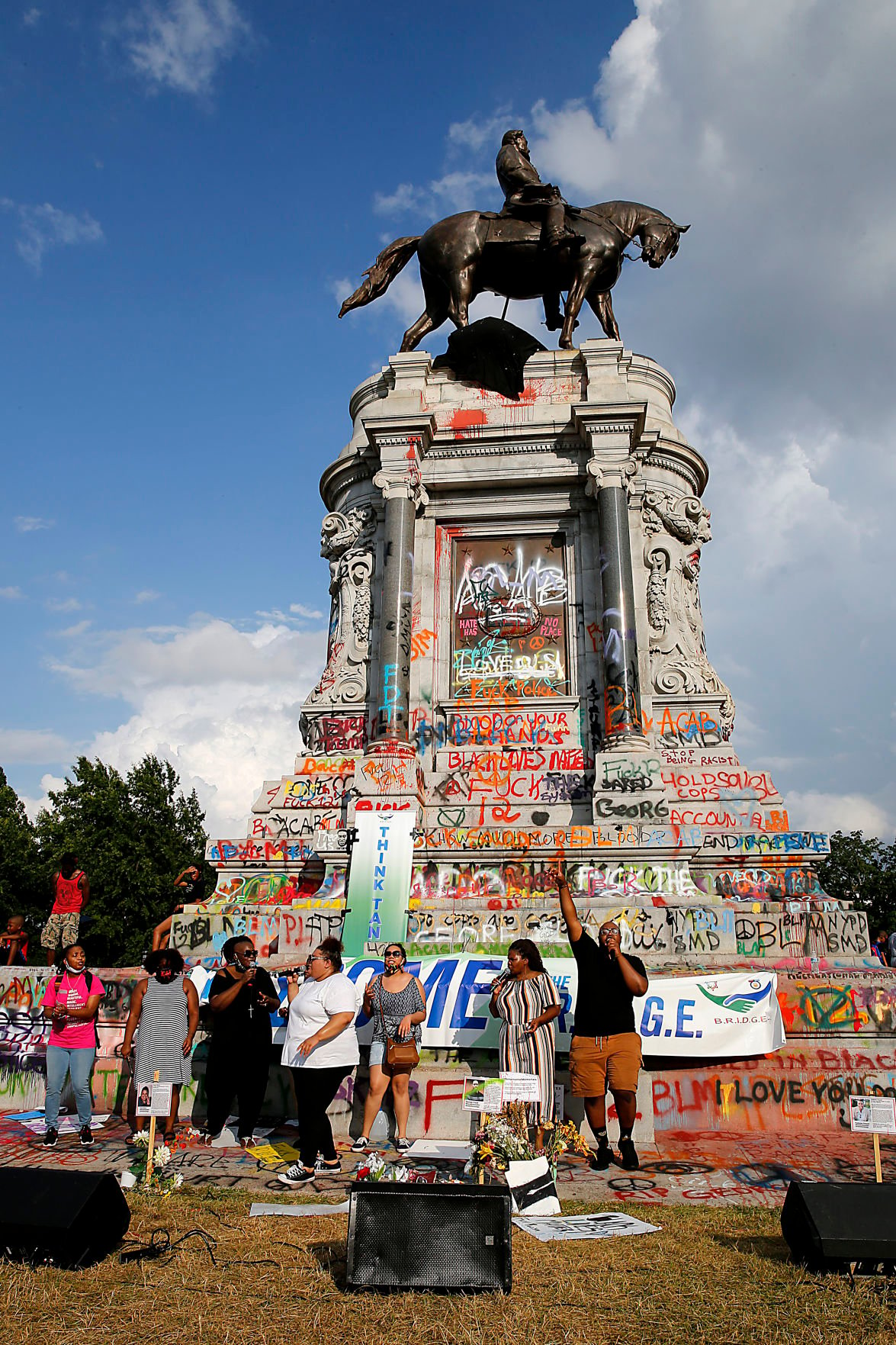 A prayer group named B.R.I.D.G.E. sang at the Lee statue on Wednesday. 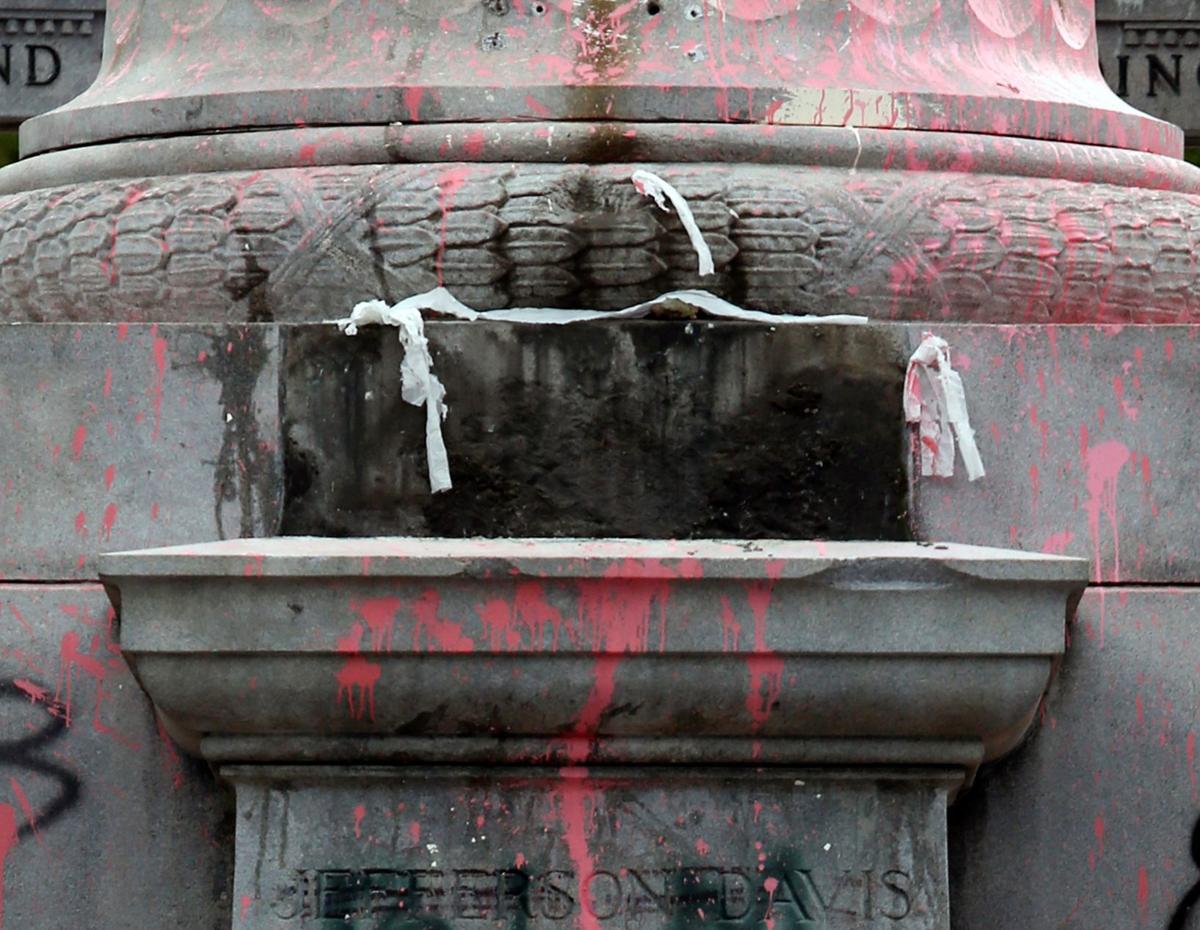 On Thursday morning, the platform that Jefferson Davis formerly stood on was empty on Monument Avenue. Protesters pulled down the statue the night before.

Confederate iconography remains throughout Virginia and in Richmond, the former capital of the Confederacy. Virginia’s 244 Confederate symbols are the most in the nation, according to a study by the Southern Poverty Law Center.

As protesters continue to rally against police brutality in the wake of George Floyd’s death, they’re also calling for racial justice. Part of that message is for Confederate monuments to come down.

Elected officials have pledged to take down some of the monuments, but last week saw many toppled or damaged. A pair of Confederate monuments in Richmond have been torn down. In Portsmouth, protesters beheaded four statues.

Gov. Ralph Northam announced June 4 that he was directing the Department of General Services to remove the Robert E. Lee statue from Richmond’s Monument Avenue, the most well-known Confederate tribute in the state. The statue’s removal is now in a court fight, with a Richmond judge last week granting a temporary injunction to keep it in place. The injunction lifts Thursday.

The other monuments in Richmond will soon be in the city’s control, with a new state law allowing local governing bodies to take down the memorials. Every member of the Richmond City Council has voiced support for their removal.

Northam and Richmond Mayor Levar Stoney have asked people to consider the risk of injury and allow the monuments to be removed professionally.

There are nearly 20 tributes to the Confederacy in Richmond, according to 2019 data from the Southern Poverty Law Center. Across Virginia, there are more than 200.

What to do with those tributes has been a matter of debate for decades.

Proponents of removal say the monuments and other symbols were erected, as Northam’s legal counsel Rita Davis said last week, to “fit a narrative that minimized a devastating evil perpetrated on African Americans during the darkest part of our past.” Opponents, however, say taking them down erases history.

“The Governor’s decision to remove the Lee statue from Monument Avenue is not in the best interests of Virginia,” Senate Republican Caucus leaders said when Northam made his announcement. “Attempts to eradicate instead of contextualizing history invariably fail.”

The symbols are facing a reckoning as protesters continue to hold rallies around them, call for removal and in some cases pull them down.

“It’s time. These statues are not just reminders of a painful past, but symbols of a painful present and even harbingers of a difficult future,” Sen. Tim Kaine, D-Va., said in a statement. “The Governor’s action answers a question: Why glorify those who fought to keep people in bondage because of the color of their skin?”

Kaine supports changing the name of Confederate Avenue, the Richmond street where he lives.

Here are more statistics from the SPLC that show the Confederacy’s prominence in Virginia:

Nearly half of the Confederate tributes are monuments. Robert E. Lee’s five monuments are the most of an individual leader, followed by Stonewall Jackson (4) and Jefferson Davis (3). The Southern Poverty Law Center data was last updated in July 2019 and does not include the monuments recently torn down, including the Davis statue on Monument Avenue in Richmond.

Robert E. Lee, who was born in Stratford and died in Lexington, is the most honored Confederate leader in Virginia. He’s followed by 22 public symbols for Stonewall Jackson, another Virginian, and 19 for J.E.B. Stuart. Ninety-two Confederate symbols have no specific honoree.

Fourteen schools in the state remain named for Confederate leaders. Richmond recently renamed J.E.B. Stuart Elementary for former President Barack Obama, and the city school system has pledged action on others, including Binford Middle and John B. Cary Elementary. Other school districts have decided to keep Confederate school names and mascots, most notably Hanover County Public Schools, which is facing an appeal in a lawsuit over the names of Lee-Davis High and Stonewall Jackson Middle.

Virginia has removed 18 Confederate symbols, including renaming 10 schools, since the 2015 shooting in which a white man killed nine black people during a Bible study in Charleston, S.C. Across the country, 123 symbols have been removed.

Military installations named for Confederate leaders have gained renewed attention after President Donald Trump said his administration would not consider renaming them. Virginia, where much of the Civil War was fought, has three such stations.

Virginia has one holiday, Lee-Jackson Day, that honors the Confederacy. Democrats in the General Assembly this year decided to remove the holiday, effective July 1, in favor of making Election Day a state holiday. Virginia had marked a state holiday for Lee’s birthday since 1889. It added Stonewall Jackson to the Lee holiday in the early 1900s. After more than a dozen years of it being merged with Martin Luther King Jr. Day — it was called Lee-Jackson-King Day — the state split them into separate holidays in 2000.

Aerial views of most of the Confederate monuments on Monument Avenue in Richmond, Virginia

The statue of Robert E. Lee on Monument Avenue is among the Confederate memorials whose future remains unknown. Gov. Ralph Northam announced earlier this month that he wants the state-owned statue removed from the historic street.

A prayer group named B.R.I.D.G.E. sang at the Lee statue on Wednesday.

On Thursday morning, the platform that Jefferson Davis formerly stood on was empty on Monument Avenue. Protesters pulled down the statue the night before.