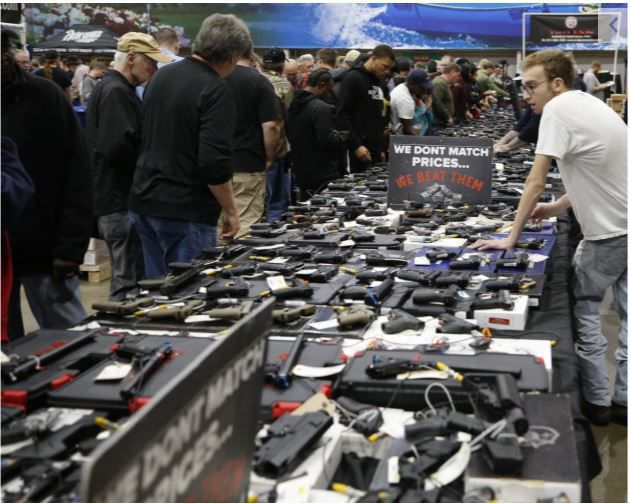 People browsed tables full of handguns at Richmond Raceway, where attendance was up. 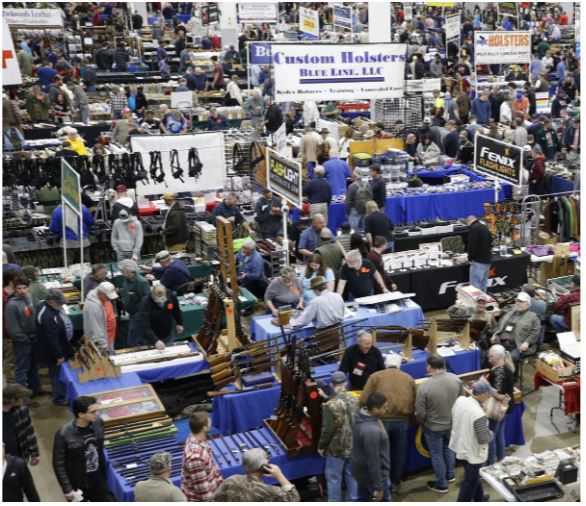 Large turnout at gun show in January at Richmond Raceway. 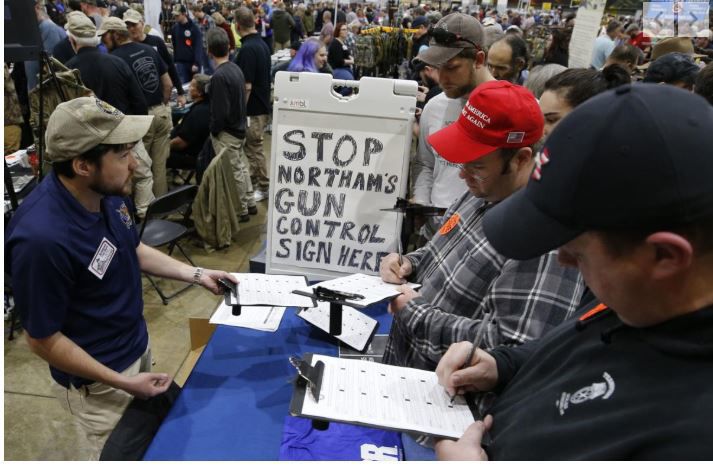 Petitions against changes to state gun laws were circulated in January during a gun show at Richmond Raceway.

For some Virginians, the purchase of firearms and ammunition has become more important than stockpiling toilet paper as anxiety spreads about the potential long-term effects of the coronavirus pandemic.

Virginia gun sales are spiking to record levels that firearm dealers attribute in part to the virus scare, but also to the lingering effects of increased gun restrictions passed by the Democrat-controlled General Assembly.

Estimated firearm sales based on mandatory criminal background checks on Virginia gun buyers smashed monthly records over the last two months, with 65,839 transactions in January and 64,076 transactions in February. That’s an increase of 84 percent and 63 percent, respectively, from the same period in 2019.

And the trend is continuing into March. There were 26,616 transactions through March 16, with transactions topping 3,000 per day on March 13, 14 and 16, according to the transaction center. The numbers do not correlate directly to the number of sales, because more than one firearm or box of ammunition could be included in a single transaction.

“On a typical day, we’re doing three times as much business as we normally do,” said Robert Marcus, the principal owner of Bob’s Gun Shop in Norfolk, one of the state’s largest commercial gun dealers. “Ammunition is going out of here by the case full. It’s a tremendous strain, but I guess we’re smiling all the way to the bank.”

Fears that the spread of the virus could lead to a breakdown of public order and lawlessness, along with concerns over on-going stock market fluctuations, have been driving some of the sales, but state dealers say other factors have contributed.

“We’re almost doing a small gun show worth of business on a daily basis,” said Jerry Cochran, owner of Trader Jerry’s, another of Virginia’s largest federally licensed firearm dealers. “Our sales were already up because of the [Gov. Ralph] Northam effect — the new gun laws — and the uncertainty of that. And then all of a sudden this panic came in with coronavirus.”

Those factors, combined with people receiving tax refunds this time of year, have all contributed to the gun-buying boom, Cochran said.

Sales are up at least 35 percent, Cochran said, “and that’s over the 25 percent it was already up because of the Northam effect,” he said. Cochran has stores in Salem and Pounding Mill but he does most of his sales at gun shows.

“It’s crazy,” he said. “We just can’t get a handle on it. We’re eventually going to run out of product.”

Mark Tosh, president of Town Gun Shop Inc. with stores in Martinsville and Chesterfield County, noted that demands for ammunition spiked within hours after President Donald Trump last week “gave his speech saying how bad the coronavirus was.”

Tosh said when he placed an order for ammunition early the next morning, a field representative for the manufacturer informed Tosh that he received $1.4 million in orders on his computer overnight in his territory, which includes 25 firearm dealers in Virginia and others in North Carolina.

“That’s incredible because that’s [demand], not stock orders,” Tosh said. “I can tell you people are buying all calibers. I have people from all walks of life [buying]. I’m talking all ages, all demographics. I have law enforcement officers loading up.”

“There’s nobody [alive today] that’s went through a pandemic of this proportion,” said Tosh, noting the 1918 influenza pandemic also known as the Spanish Flu. “The fear is we don’t know how bad it’s going to be.”

Larry Hyatt, owner of a gun store in North Carolina, told the New York Times that the spike in gun sales at his store could be attributed mainly to the virus scare, although the presidential election and stock market gyrations have also contributed. He said his store is selling more than 300 firearms a week.

“People have a little lack of confidence that if something big and bad happens, that 911 might not work,” Hyatt told the Times. “We saw it with Katrina,” a reference to the breakdown in emergency response after the 2005 hurricane on the Gulf Coast.

The Times said reports of firearms and survival gear flying off the shelves have been widespread, including in California, New York, Washington state, Alabama and Ohio. Virginia can now be added to that list.

Photos on Twitter over the weekend showed lines around the block at one Los Angeles gun shop.

“People are concerned,” Marcus said. “They’re concerned about losing their gun rights, they’re getting their tax refunds, and there’s a tendency for people to think in terms ... of a societal breakdown as one of the many reasons for purchasing a firearm.”

Marcus said his store is limiting sales of “scarcer ammo” to two boxes per person. That includes 9 mm and 5.56 mm rounds.

“We buy directly from the manufacturers ... and they’re telling us that they can’t fill an order for 120 days,” Marcus said. “Things are going to be tight for a while.”

Cochran, who does a lot of business at gun shows, noted that those events have been canceled for the foreseeable future due to the governor’s ban on gatherings of 10 or more people. The last gun show in Virginia was last weekend in Fredericksburg.

Gun sales spiked at that gun show because the city is close to Northern Virginia, “and most of those people are very informed and a lot of them work for the government, and would have been furloughed already,” Cochran said.

Karen Allan Ballengee, owner of Southern Gun World on Midlothian Turnpike in Chesterfield, says gun and ammunition sales “are through the roof” and customers are “buying everything” — although firearms that sell in the $289 to $310 range are popular “because people are worried about their money.”

“People want to protect themselves, it doesn’t make any difference what it is,” she added. “Anytime that something puts a fear into customers of any kind, people always buys guns. But we don’t see people panicking and buying 10 guns at a time. And we’re not seeing an excessive buying of assault-type weapons.”

Because of the run on ammunition, Ballengee said her store is limiting ammo sales to one box of 50 rounds. “If it gets any worse, they’re not going to be able to buy the bullets, because we need them for the gun sales.”

“I’m not really sure,” Cochran joked, “but I suspect that they’ve hoarded so much toilet paper that they’re going to need extra bullets to protect it.”

Virginia gun sales soared in December to the second-highest monthly total on record, fueled by the Democratic takeover of the General Assembly…

People browsed tables full of handguns at Richmond Raceway, where attendance was up.

Large turnout at gun show in January at Richmond Raceway.

Petitions against changes to state gun laws were circulated in January during a gun show at Richmond Raceway.