This ordinance would empower Richmonders to decide how some of their tax dollars are used. 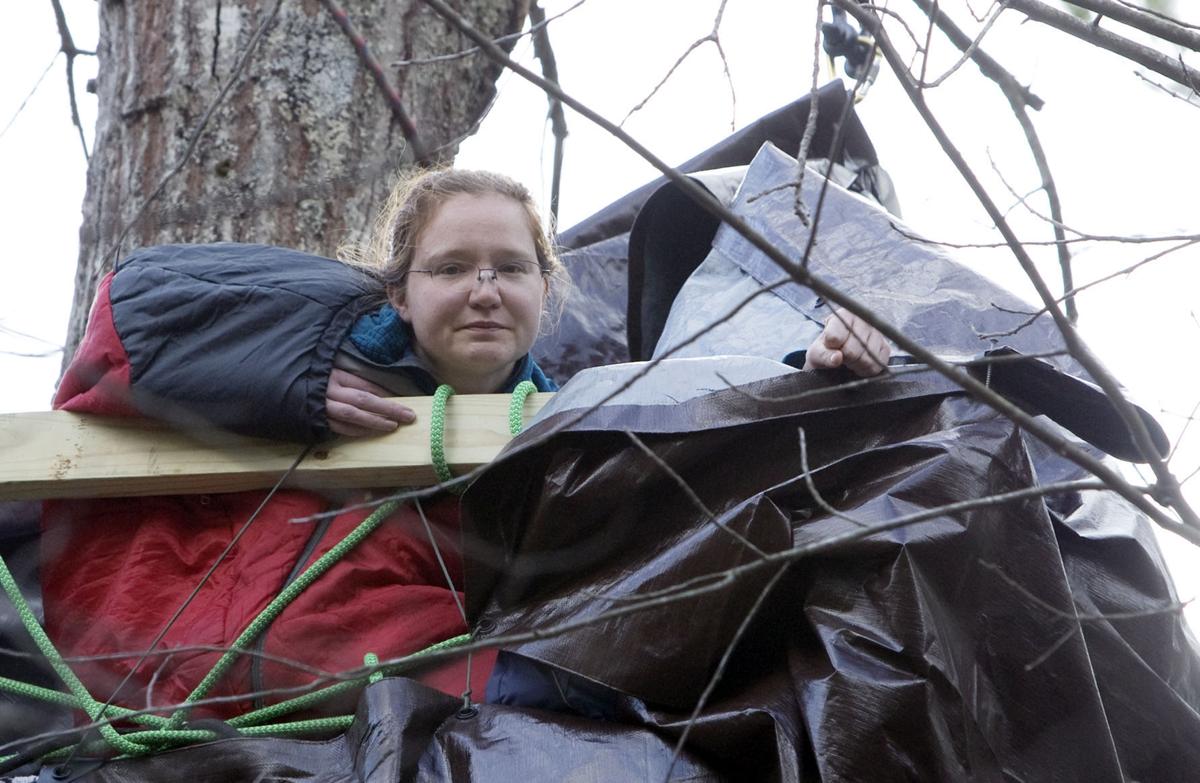 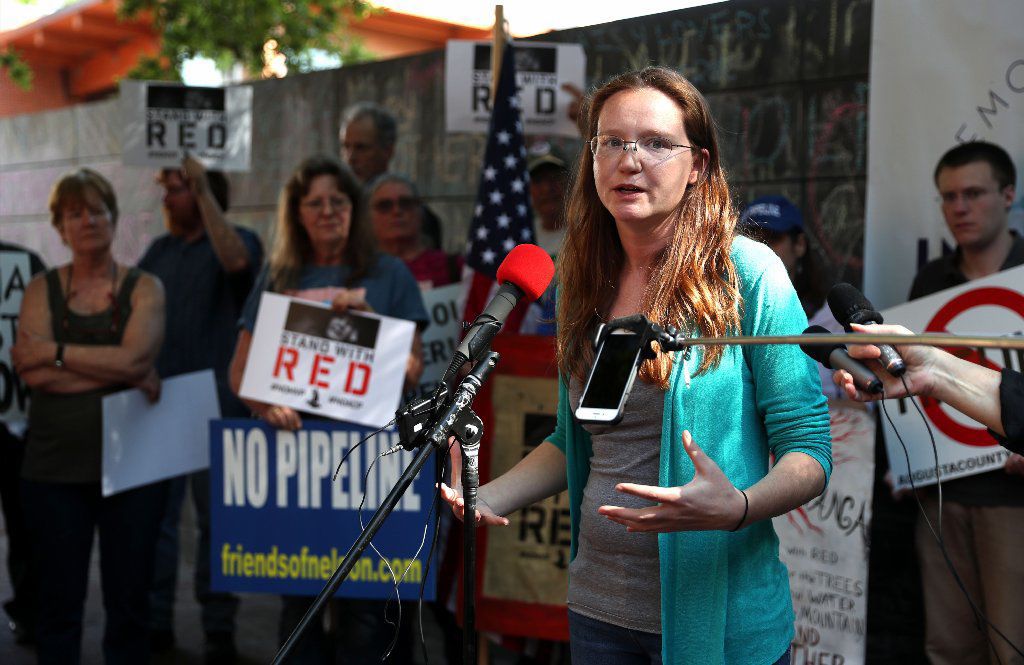 Minor Terry speaks to a crowd about the Mountain Valley pipeline at the free speech wall on the Charlottesville Downtown Mall on May 7. Theresa "Red" Terry and her daughter Minor remained in shelters built in the trees on their property at Bent Mountain for 34 days to block tree cutting for the pipeline. The mother and daughter were on a statewide tour to demand Gov. Ralph Northam order an inspection of the potential environmental impact of the pipeline. 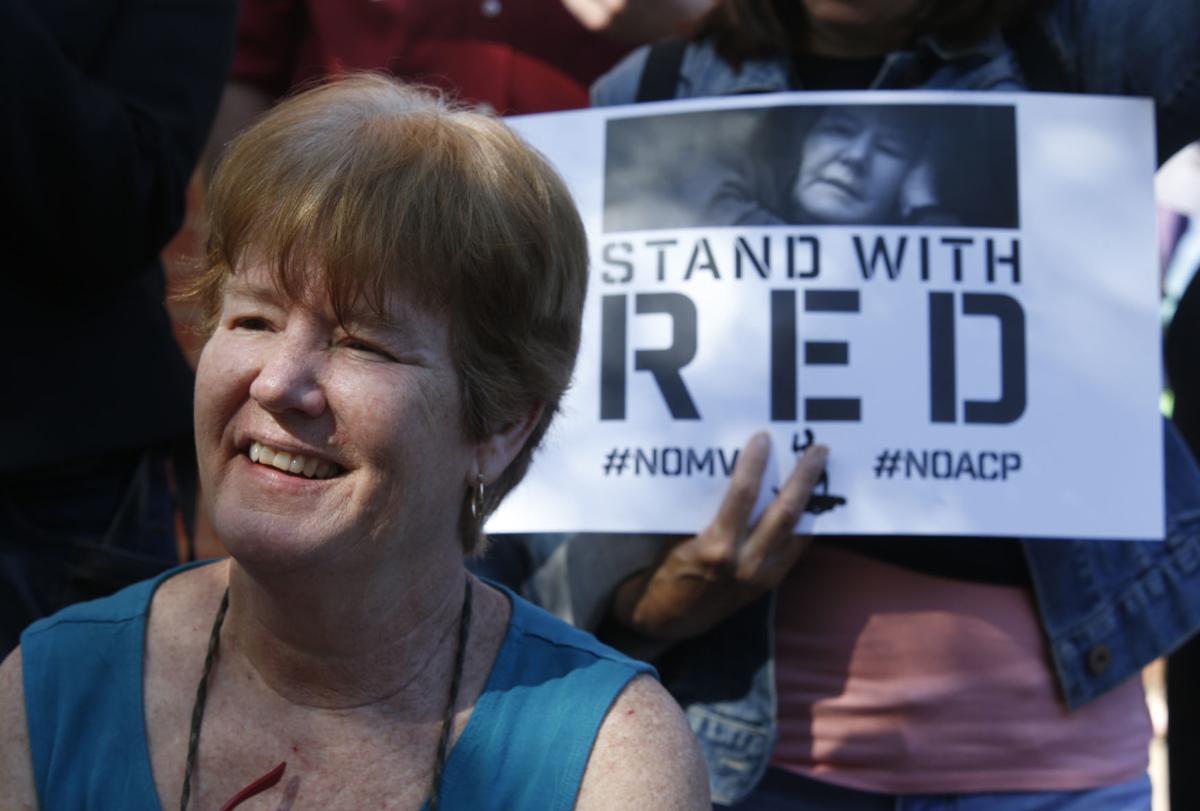 Theresa "Red" Terry, the pipeline protester who camped out in a tree for five weeks in an effort to stop the path of the Mountain Valley Pipeline, smiles during a rally in Richmond on May 9. The protesters were across the street from the Dominion stockholders' meeting.

The distinct sound of a human stepping on a branch woke Minor Terry at 5 a.m. several days after she began a protest of the natural gas pipeline planned to run through her family’s property.

Even the birds on Bent Mountain weren’t awake yet.

She called down from her tree sit to ask who was there. A man responded, “Oh, hi, ma’am. We’re just checking on you.”

Who is we, she asked.

She fumbled for her glasses, found a flashlight and notified her family that stuff was going down. Four Roanoke County police officers were under the tree. It was the morning when contractors for the Mountain Valley Pipeline were to begin cutting trees.

Terry, her mother, Red Terry, and other protesters who took to the trees to try to delay tree cutting for the pipeline earlier this year didn’t know it, but the law enforcement response they were about to encounter was coordinated by the Virginia Fusion Center, an entity tasked with fighting terrorism.

And local sheriffs were recruited to informational meetings of the Fusion Center by the Anti-Terrorism Advisory Council of the U.S. Attorney’s Office in Virginia’s Western District.

Both entities took a role in working with local law enforcement before anticipated protests, according to records obtained through Freedom of Information Act requests to the Montgomery and Giles county sheriffs and the Virginia Department of Emergency Management. The records were provided to the Richmond Times-Dispatch by the Climate Investigations Center, a group in Northern Virginia that acts as a watchdog on the fossil fuel industry and pushes for renewable energy.

“It sounds so ridiculous,” Minor Terry said, after learning that entities tasked with fighting terrorism were involved. “At the stage we’re in, we were protesting the trees being cut and the pipeline even moving forwards, so I find it absurd.”

Terry spent 33 days in her tree sit, and her mother 34, before they came down May 5, rather than pay fines to the Mountain Valley Pipeline, as ordered by a federal judge. Long before that happened, records show, the anti-terrorism entities started working with local law enforcement to gear up.

According to the records:

“Generally, one of my duties is to assist in the sharing of intelligence between federal and state law enforcement agencies and to help our partners in their domestic and international terrorism efforts,” she said.

She invited the sheriff to a Nov. 30 meeting at the U.S. Attorney’s Office in Roanoke with “our partners” at the Virginia Fusion Center, saying the center “will be presenting intelligence and other information about the Mountain Valley and Atlantic Coast Pipeline construction and issues.”

Cynthia Waters, an intelligence analyst with the Virginia State Police, emailed local law enforcement officers, state police and Carlton on Dec. 14 about a conference call between the Fusion Center and security representatives from EQT Midstream Partners, a key player in the pipeline construction.

She updated them on the federal regulatory process for trees to be cleared and construction plans.

An EQT security coordinator would be in touch with local law enforcement in the pipeline path to schedule meetings with them, she said. “After these meetings I’ll follow up to address safety concerns or threats being considered within each jurisdiction and discuss VFC support throughout the project’s duration.”

In a Feb. 9 email to the Montgomery sheriff, a Virginia State Police sergeant summarized a Feb. 5 meeting presented by EQT. At the conclusion, EQT’s government relations manager, Maurice Royster, and his colleagues “were encouraged to provide information on Mountain Valley Pipeline activity to the Fusion Center so the information could be vetted and disseminated to those that need to know the information,” the sergeant’s email said.

And then on Feb. 16, Richard Chidester, the Giles County attorney, sent an email to the superintendent of New River Valley Regional Jail, copied to the sheriff and county administrator, alerting him that the sheriff received information about an “organized protest” in the near future, but with no exact date.

“Some of the protesters that showed up in Richmond at DEQ hearings got arrested,” he wrote, referring to the Department of Environmental Quality. “We may not have that experience and if we get more information we’ll pass it along. The Sheriff is getting info from the VSP Fusion Center.”

The state records also show that the Fusion Center disseminated “pipeline situation reports,” which included information on how many people on Facebook were “interested” in meetings of groups such as the Sierra Club, Chesapeake Climate Action Network and Preserve Floyd.

In response to questions about the role of the U.S. attorney’s anti-terror task force in response to pipeline protests, Laura Rottenborn, executive assistant U.S. attorney in the Western District, said one way the federal government gets involved is by helping with planning among local, state and federal authorities if a protest could rise to the level of a “critical incident.”

A representative of the Virginia Fusion Center, which operates on $5.7 million annually in federal and state money, referred questions to state police spokeswoman Corinne Geller.

Geller declined to answer questions about how the center got involved in protests of the Mountain Valley Pipeline, whether anyone reached out to the center to request its involvement or whether EQT requested assistance from the Fusion Center.

Asked if the governor or state public safety secretary ordered or requested the Fusion Center’s involvement, she said, via email, that no individual commanded the center to assist.

She said the primary role of the Fusion Center is to coordinate counterterrorism and “criminal intelligence resources” from local, state and federal agencies — as well as private industry — “in order to better defend the Commonwealth against terrorist threats and/or attack and to deter criminal activity.”

But she said the role has expanded.

“Since its inception in 2005, the VFC has evolved to its current status of aiding local, state and federal public safety agencies [to] address all crimes and all hazards, including threats posed by violent extremists regardless of ideology.”

Beth Deel, a Roanoke mother and vice chairwoman of the city Democrats, was part of a support crew for Red Terry and Minor Terry at their tree sits. She said tree cutting happened via federal injunction, and questioned why state and local law enforcement would participate in gathering information on and surveilling landowners conducting a peaceful protest.

During her 33 days in a tree, Minor Terry said, she was monitored by mostly male officers from Roanoke County police and Virginia State Police, as well as an official from Global Security, a Mountain Valley Pipeline contractor. Officers were polite, she said, and everyone was generally bored.

Police denied her access to food and water but she realized they were acting on orders from above. A spotlight shone on her tree sit at night to make sure no one tried to bring her supplies.

Terry said she found a surprising number of Roanoke County officers didn’t seem sure why they were there, so she tried to educate them.

“This is such a large financial project, and money is driving the speed of it,” she said. “If we can cost them enough money ... [maybe] it’s not feasible enough to go forward.”

Judge to tree-sitters opposing Mountain Valley Pipeline: This is 'not a game'

The last of three tree-sitters on a Rocky Mount farm abandoned his elevated platform late Monday morning, clearing the way for Mountain Valley Pipeline crews to continue toppling trees there.

On her 57th day perched atop a pole, a Mountain Valley Pipeline protester decided to come down Wednesday.

ROANOKE — State regulators have put a stop to construction of part of the Mountain Valley Pipeline swamped by a rainstorm, saying work cannot …

Pipeline opponents: 'Northam is going to have to answer for what this looks like'

HIGHLAND COUNTY — In this corner of the George Washington National Forest, the slope rises sharply from the bank of a briskly bubbling stream …

ROANOKE — After more than three months of hindering construction of the Mountain Valley Pipeline, opponents on Friday lost their last two aeri…

Two environmental groups on Wednesday called on Gov. Ralph Northam and relevant state leaders to order an end to surveillance of Mountain Vall…

Minor Terry speaks to a crowd about the Mountain Valley pipeline at the free speech wall on the Charlottesville Downtown Mall on May 7. Theresa "Red" Terry and her daughter Minor remained in shelters built in the trees on their property at Bent Mountain for 34 days to block tree cutting for the pipeline. The mother and daughter were on a statewide tour to demand Gov. Ralph Northam order an inspection of the potential environmental impact of the pipeline.

Theresa "Red" Terry, the pipeline protester who camped out in a tree for five weeks in an effort to stop the path of the Mountain Valley Pipeline, smiles during a rally in Richmond on May 9. The protesters were across the street from the Dominion stockholders' meeting.