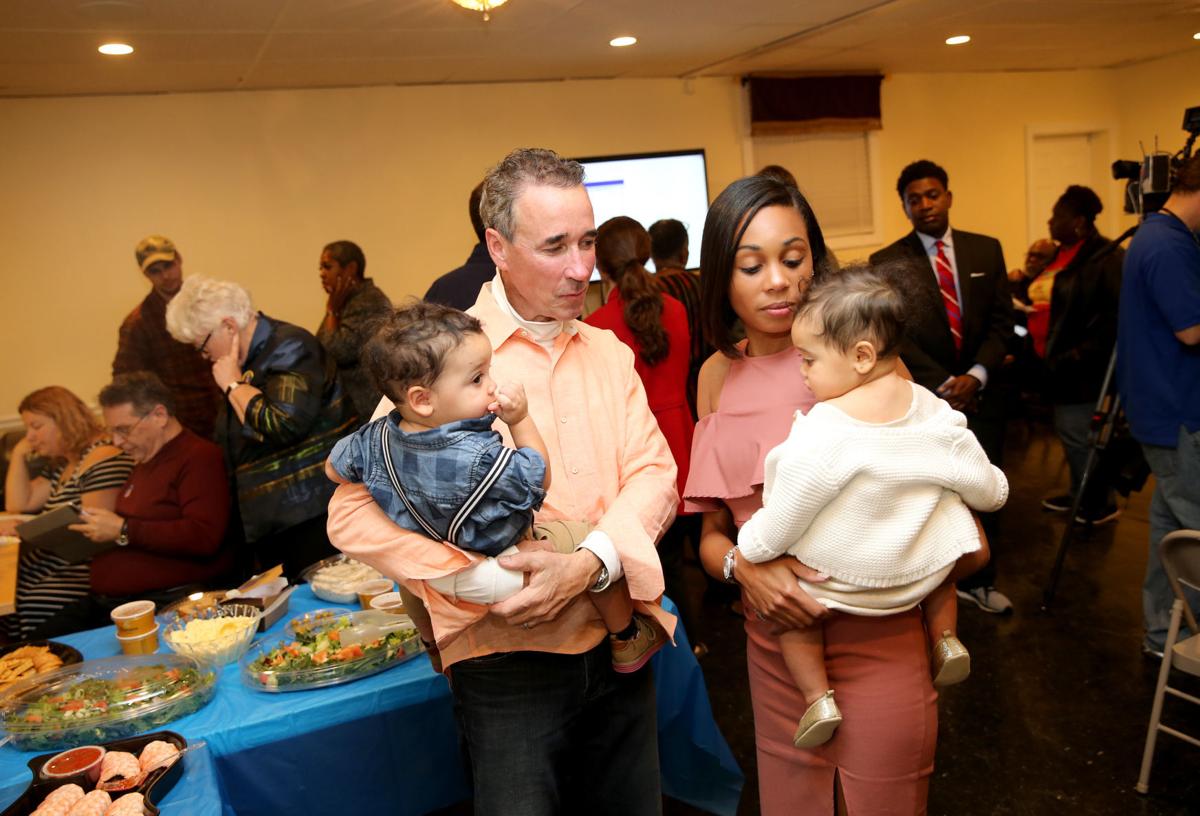 Joe Morrissey waits an election result with his wife, Myrna, and two children, Chase and Bella, at his campaign headquarter in Richmond on Tuesday, Nov. 8, 2016. 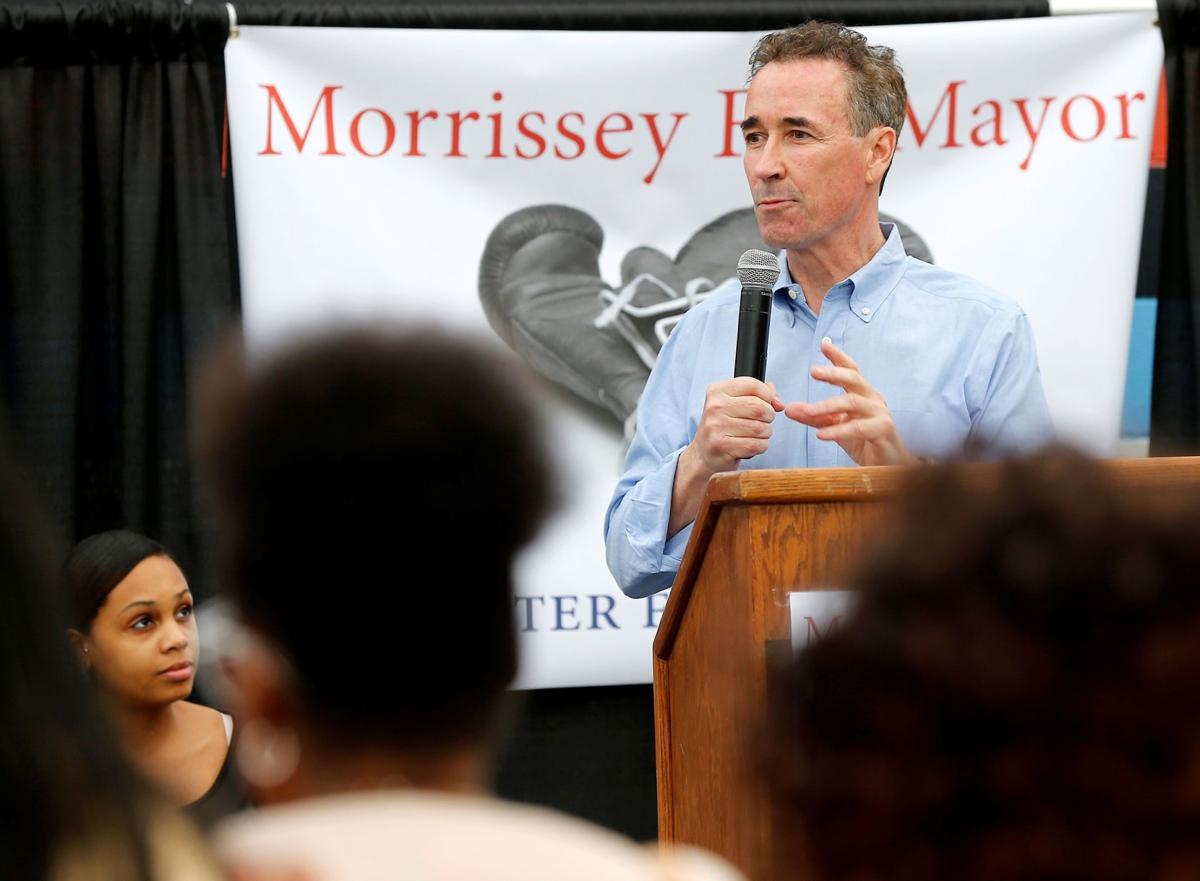 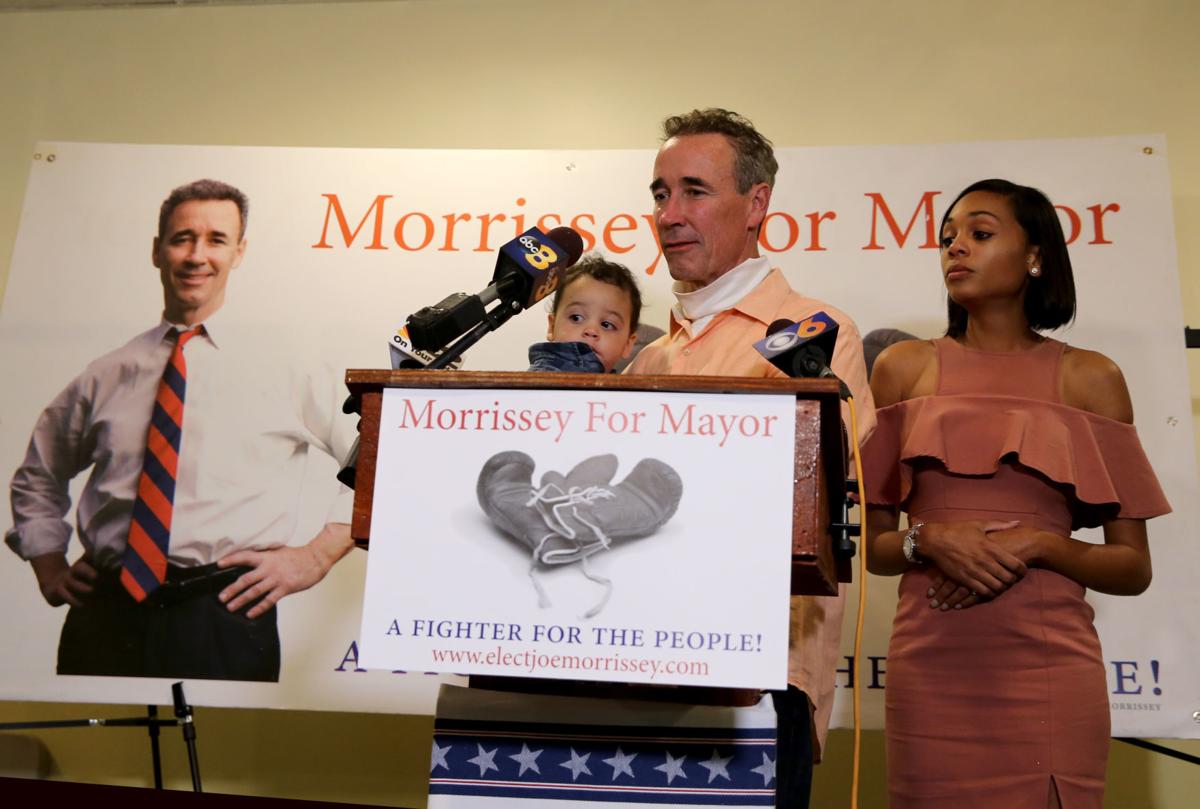 Richmond attorney Joe Morrissey, accompanied by wife Myrna and son Chase, spoke to supporters during a failed bid for mayor in 2016.

The Virginia State Bar charged former Del. Joseph D. Morrissey this week with destroying evidence and making false statements in court in an attempt to cover up a 2013 sexual relationship with a then-17-year-old receptionist in his law office.

Morrissey, a flamboyant area defense attorney who was a front-runner in Richmond’s mayoral contest last year, could face the suspension or loss of his law license if the ethics complaint is upheld.

The bar investigation follows a criminal prosecution that concluded in 2014, when he entered a plea deal in which he agreed to serve three months in jail on a single charge of contributing to the delinquency of a minor. Morrissey has since married the woman, Myrna Morrissey, and the couple have two children together.

Morrissey vigorously argued that he was innocent, including in a court filing attached to his plea. In the document, he claimed he was framed by the young woman’s jilted lover, whom Morrissey said had planted lewd and incriminating text messages discovered by police.

It was that defense — and the court filing that laid it out — that drew the ethics investigation, which began in 2015 and focused on whether Morrissey committed professional misconduct by lying to further his defense.

According to the bar complaint, Morrissey did. The seven-page document details allegations that he concocted the hacking defense, deleted incriminating text messages from his phone, fabricated alibis and instructed potential witnesses as to what their testimony should be.

The bar cites witness testimony, phone records and a recording of Morrissey himself, in which he instructed Myrna “what the story should be, talked to her about who she could get to help corroborate the story and told her how to get other individuals to agree with the theory.”

And it details what it describes as Morrissey’s evolving alibis for the night he was accused of having sex with the receptionist, first telling his defense attorney that he had sex with another woman in his office that night, then claiming he was never in his office and instead was at a meeting in Charles City County and later met with a minister and delivered backpacks for children.

Morrissey could not be reached for comment Tuesday, but the bar complaint notes he has retained a lawyer and is acting as his own co-counsel.

“During the course of the hearings conducted in this matter, (Morrissey) has made false statements to the court regarding the ... case in that, among other statements, he continues to tell the court that he did not send sexually explicit messages,” according to the document

The complaint will go next to the bar’s disciplinary board for a hearing, which has not yet been scheduled. Morrissey has already lost his Virginia license to practice law once, in 2003. That was two years after a disciplinary panel disbarred him at the federal level, citing, in part, Morrissey’s “chronic disregard for truthfulness.”

The Supreme Court of Virginia reinstated his state license in 2012, against the recommendation of the State Bar’s disciplinary board.

The Wilder complaint centers on Morrissey’s representation of Wilder and his National Slavery Museum in 2013. At the time, Wilder was seeking to fend off the city of Fredericksburg’s efforts to collect $320,000 in unpaid taxes. Wilder’s complaint questions Morrissey’s competence and diligence in the matter. Morrissey has said Wilder filed the complaint only after he was unable to pay an outstanding legal bill.

A hearing on that case is set for Wednesday and Thursday in Richmond Circuit Court.

Morrissey, a Democrat, served in the House of Delegates from 2008 to 2014, when he stepped down amid pressure from fellow lawmakers. However, he immediately announced his candidacy as an independent in the special election to choose his replacement — a race he won while serving a work-release jail sentence.

He announced he would run for mayor in March last year and polling throughout the race put him in the lead of the crowded field.

In the final weeks of the race, Morrissey faced allegations of sexual misconduct by a former law client, who said Morrissey exposed himself to her in his law office and sent her inappropriate text messages. A Henrico County judge took the rare step of granting the woman a new trial after the allegations were revealed. Morrissey made repeated and forceful denials of the claims.

Morrissey has been grabbing headlines since he was elected Richmond commonwealth’s attorney in 1989. Here's a history.

July 1990: Virginia State Bar orders Morrissey to attend an ethics course after a former client complains that a personal injury suit was mishandled.

September 1990: Virginia State Bar committee clears Morrissey of seven allegations that he says concerned his conduct as a defense lawyer and commonwealth’s attorney-elect.

July 1991: He is convicted of contempt in Richmond General District Court, fined $50 and sentenced to 10 days in jail after writing a critical letter to a substitute judge.

December 1991: Morrissey gets into a courthouse fistfight with defense attorney David P. Baugh. He later serves five days in jail for contempt of court.

June 1993: Morrissey is indicted on five felony charges, including bribery, perjury and misuse of public funds, four days before the primary for the Democratic nomination for commonwealth’s attorney. He is defeated in the primary by attorney David M. Hicks, who wins the seat in November. After the primary, Morrissey is suspended —– and reinstated — from the prosecutor’s office several times.

August 1993: A jury acquits Morrissey of the three bribery charges, and the other two charges are ultimately dismissed.

December 1993: Morrissey’s law license is suspended for six months when a three-judge panel rules he violated legal ethics with his handling of a rape case.

February 1998: A U.S. District judge sentences Morrissey to 90 days in jail and suspends him from practicing in federal court for two years for breaking court rules by talking to reporters about a drug case.

October 1999: A jury convicts Morrissey of assault and battery and fines him $2,500 for beating Garien H. Wycoff in a Richmond backyard July 3. One week later, Wycoff files a lawsuit against Morrissey for $1.3 million.

November 1999: Morrissey files a lawsuit against Wycoff, Ann Marie Wycoff and Johanna Wycoff, alleging they conspired to damage Morrissey’s professional reputation by lying about him in court. Morrissey drops the lawsuit in January 2001.

February 2000: Federal prosecutors accuse Morrissey, a defense attorney at the time, of trying to fake completion of community service hours, which were part of his 1998 U.S. District Court sentence for contempt of court.

March 2000: A three-judge panel for the State Bar suspends Morrissey from practicing law for three years. The judges find that he violated disciplinary rules for lawyers in the Virginia Code of Professional Responsibility.

September 2000: A federal judge orders Morrissey jailed for 90 days for violating probation on his 1998 contempt conviction. In August 2000, the judge convicted Morrissey of violating his probation. The judge determined that Morrissey lied when he denied attempting to bribe a Habitat for Humanity construction supervisor to falsely state that Morrissey had completed his community service.

December 2001: A panel of U.S. District Court judges bars Morrissey from practicing law in federal court due to his frequent episodes of unethical and disobedient conduct.

Spring 2006: Morrissey returns to Richmond after teaching and studying in Dublin, Ireland, in 2001 and teaching trial advocacy to prosecutors in Sydney, Australia, in 2003. He is denied admittance to the Australian bar.

June 2014: Morrissey is indicted by a special grand jury in Henrico on four felony counts and a misdemeanor charging him with sexually abusing a minor over whom he had a custodial relationship - a receptionist in his law office. Those charges carried up to 41 years in prison.

December 2014: Morrissey enters an Alford plea to a single misdemeanor count of contributing to the delinquency of a minor and is sentenced to 12 months in jail, with six months suspended. By entering an Alford plea, Morrissey does not admit wrongdoing but acknowledges that the prosecution had enough evidence to convict him. He served three months, spending nights in jail while representing his district in the legislature during the day.

January 2015: Morrissey is charged by a grand jury with felony charges of perjury, uttering a forged document, conspiracy and inducing false testimony.

September 2015: After an appeal by a special prosecutor, the Virginia Court of Appeals upholds the dismissal of four felony charges.

A disciplinary hearing has been set for August on Virginia State Bar complaints — one filed by former Gov. L. Douglas Wilder — alleging miscon…

A Henrico County judge allowed a woman formerly represented by Joe Morrissey’s law firm to withdraw a guilty plea this week amid allegations that the Richmond mayoral candidate pressured her for sex. (Warning: graphic content)

Morrissey has been grabbing headlines since he was elected Richmond commonwealth’s attorney in 1989. Here's a history.

Alleging he was falsely depicted as “a stupid liar who was a sex-crazed maniac,” former Richmond mayoral candidate Joe Morrissey has filed a l…

Joe Morrissey waits an election result with his wife, Myrna, and two children, Chase and Bella, at his campaign headquarter in Richmond on Tuesday, Nov. 8, 2016.

Richmond attorney Joe Morrissey, accompanied by wife Myrna and son Chase, spoke to supporters during a failed bid for mayor in 2016.