Gov. Terry McAuliffe holds up the order he signed to restore rights to felons in Virginia at the Capitol in Richmond VA Fri. April 22, 2016. 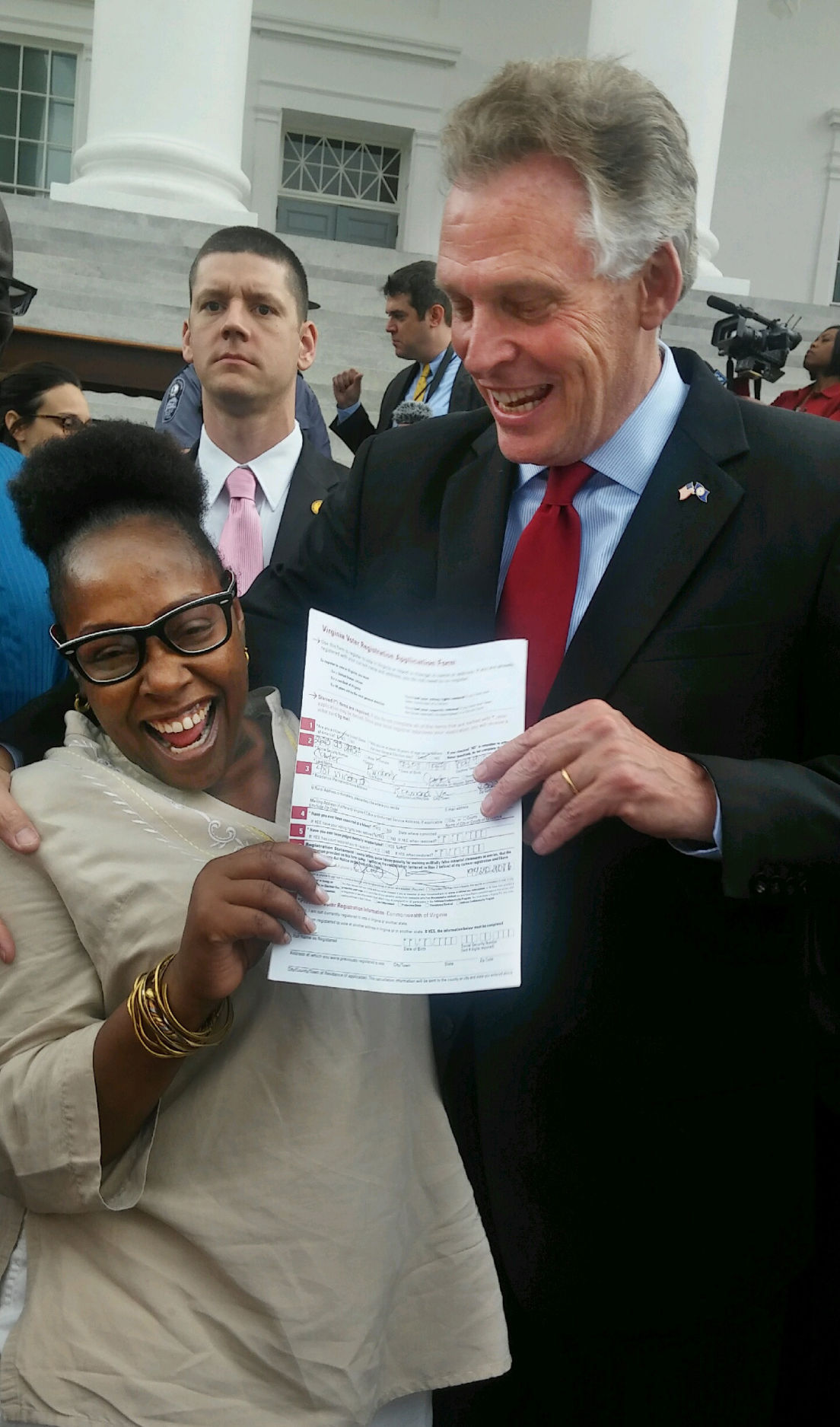 Gov. Terry McAuliffe’s administration is taking to heart President Ronald Reagan’s famous maxim as the state works with local registrars to verify that felons’ voting rights were restored when the governor signed an order April 22 that opened the door to full civil rights for more than 206,000 Virginians who have done their time for felony convictions.

For many, verification has required nothing more than a quick search in one of two state databases fully updated a week after McAuliffe’s order to show when felons’ rights had been restored. Almost 2,100 had registered to vote by midday Thursday.

But for others, the path to voter registration has required a detour through the Secretary of the Commonwealth’s Office, which is doing the necessary pick-and-shovel work with state police to determine whether felons whose names don’t show up in the database indeed have had their rights restored.

“We’re not just taking anyone’s word for it,” Secretary of the Commonwealth Kelly Thomasson said in an interview Thursday. “We’re verifying they’re eligible.”

The governor’s office has regarded the sweeping restoration order as not requiring individual verification for felons who had served their sentences and completed probation under their convictions. Administration officials say the symbolism alone is important to those who had lost their civil rights, whether they seek to register or not.

But local registrars have reminded the state that the law requires them to ensure a person is eligible to vote. For felons, that requires a notation of when their rights were restored in the electronic databases of the Department of Elections and the Secretary of the Commonwealth’s Office.

Late last month, the State Board of Elections adopted a new voter registration form and regulations that restrain registrars from asking felons more than if and when their rights were restored, as long as they are listed in the Secretary of the Commonwealth’s Office’s database for restoration of rights. They still must say on the form whether they have been convicted of a felony.

“The answer remains yes, even when their rights are restored,” Haake said.

When McAuliffe signed the restoration order, state Commissioner of Elections Edgardo Cortes cautioned registrars that the process of updating the elections database, the Virginia Election Registration Information System, or VERIS, would take time, and it did — a full week to ensure the names on the restoration of rights database were reflected as eligible for registration.

The Secretary of the Commonwealth’s Office says the list of 206,000 felons whose rights were restored under the governor’s order is an estimate based on information about convictions collected primarily from the Department of Corrections and the State Compensation Board, which oversees local and regional jails.

State police previously provided criminal histories to the secretary’s office under the system initiated by then-Gov. Bob McDonnell and continued in revised form by McAuliffe to restore the rights of nonviolent felons, although some were barred under the previous administration based on the nature of their crimes. This was in addition to the process through which people applied directly for restoration of rights.

The restoration order applies to all felony convictions, regardless of the offense, as long as the felons have completed their sentences and any required probation.

After McAuliffe signed the order, the secretary’s office had to update its restoration of rights database, which it then transmitted to the Department of Elections to update VERIS. Once that was completed April 29, the elections database began updating daily to reflect an “end date” on which rights were restored to felons on the list of prohibited voters in the system.

In the meantime, state officials urged registrars and ex-offenders to use the secretary’s database to verify the names of people covered by the governor’s order. The website itself cautioned, “Data importation in progress. If your search results in no record found, please try again next week.”

Haake, whose office has received about 100 applications by felons since the governor’s action, said he told his staff to “run them through again” after several days if there was no initial match.

Thomasson said it was not technologically possible to speed the importation of names and records into the restoration of rights database, which could begin only after the governor signed the order.

Previously, the biggest batch of names entered into the system was about 1,000.

“There is nothing we could have done that would have changed the time it would (require) to process the information,” she said.

But the lag caused problems for some local registrars, especially in Richmond and Henrico County, who were flooded with applications for registration early last week but in some cases could not verify that felons’ rights had been restored on either the Secretary of Commonwealth’s Office’s or the elections database.

“A lot of people showed up when the action was released, waiting for the switch to be flipped,” said Henrico Registrar Mark D. Coakley, whose office received more than 200 applications in the first several days after the order.

By last week, applications were arriving at a normal pace, Coakley said. “We’re processing everything. We’ve not held anything up.”

Richmond Registrar J. Kirk Showalter said her office has received more than 200 applications from ex-offenders to register to vote since the governor’s order.

Last week, Showalter said she forwarded three batches of names, for a total of about 160, to the Secretary of the Commonwealth’s Office to research.

Of the 125 names in the first two batches, she said six had been verified by late Thursday and that more work was required, using full Social Security numbers and other data, to research the rest.

State officials say the process could take a few days or a few weeks.

“This looks like it will be a tedious and long process,” Showalter said.

However, Showalter and other registrars say the process has become smoother since the first, frantic week, which was the week before municipal elections in much of the state and the beginning of absentee voting in congressional primaries scheduled June 14.

“I think really it was just a shock to the system of a lot of registrars,” said Tracy D. Howard, registrar in Radford and president of the Voter Registrars Association of Virginia.

“I really think it’s calming down and things are beginning to work the way they were envisioned to work,” Howard said last week.

The Secretary of the Commonwealth’s Office is handling 150 to 200 requests a day to verify voter eligibility, in addition to the names forwarded by a dozen or so registrars, said Jack Irvin, operations manager for restoration of rights, which is relying on three full-time and three part-time staff members to do the work.

Irvin said one-fourth of the cases have been resolved relatively easily because the names are in the database but not immediately accessible because of the way the person’s name or other data was entered.

“It has to be the exact match,” Coakley said in Henrico.

State officials said they took a conservative approach to compiling the list by excluding people associated with multiple Social Security numbers, dates of birth or names, as well as people convicted in federal courts.

“The list is not all-inclusive,” McAuliffe spokesman Brian Coy said in a fact sheet sent to the news media last week.

Some people seeking to register may not be eligible. The state excluded anyone from restoration who still was in prison or jail, or under supervision for probation and parole.

“We’re confident nobody on the list is being supervised,” Irvin said.

In cases that are harder to resolve, the office is working with state police to secure a person’s state identification number to match against the various records the state uses to determine whether a person’s rights had been restored and the individual was eligible to vote.

None of the felons covered by the governor’s order would have been able to register in time to vote in last week’s town and city elections, but they have until May 23 to register for the congressional primaries in June.

While some still are waiting to verify they are eligible to vote, others registered quickly after finding their names on the state list.

“I just wanted to let you know I received my notification today in the mail that I am now a registered voter,” said one ex-offender who had been directed to the secretary’s website but did not want to be identified.

Gov. Terry McAuliffe holds up the order he signed to restore rights to felons in Virginia at the Capitol in Richmond VA Fri. April 22, 2016.