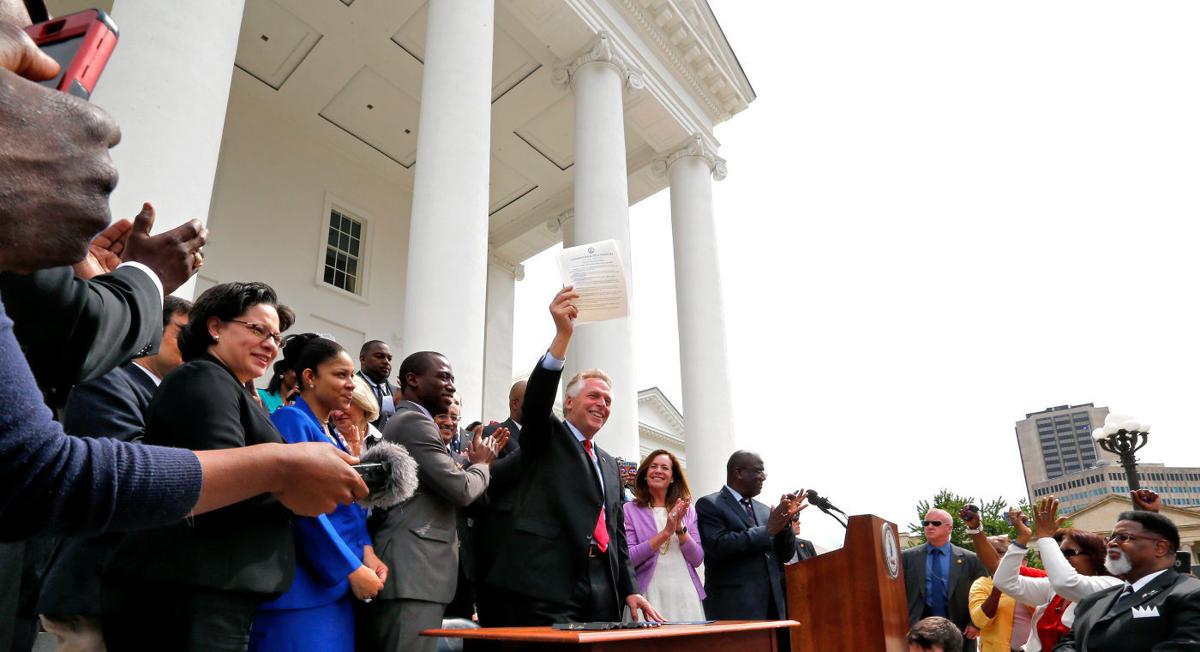 At the state Capitol in Richmond on April 22, Gov. Terry McAuliffe held up the order he signed to restore voting rights to 206,000 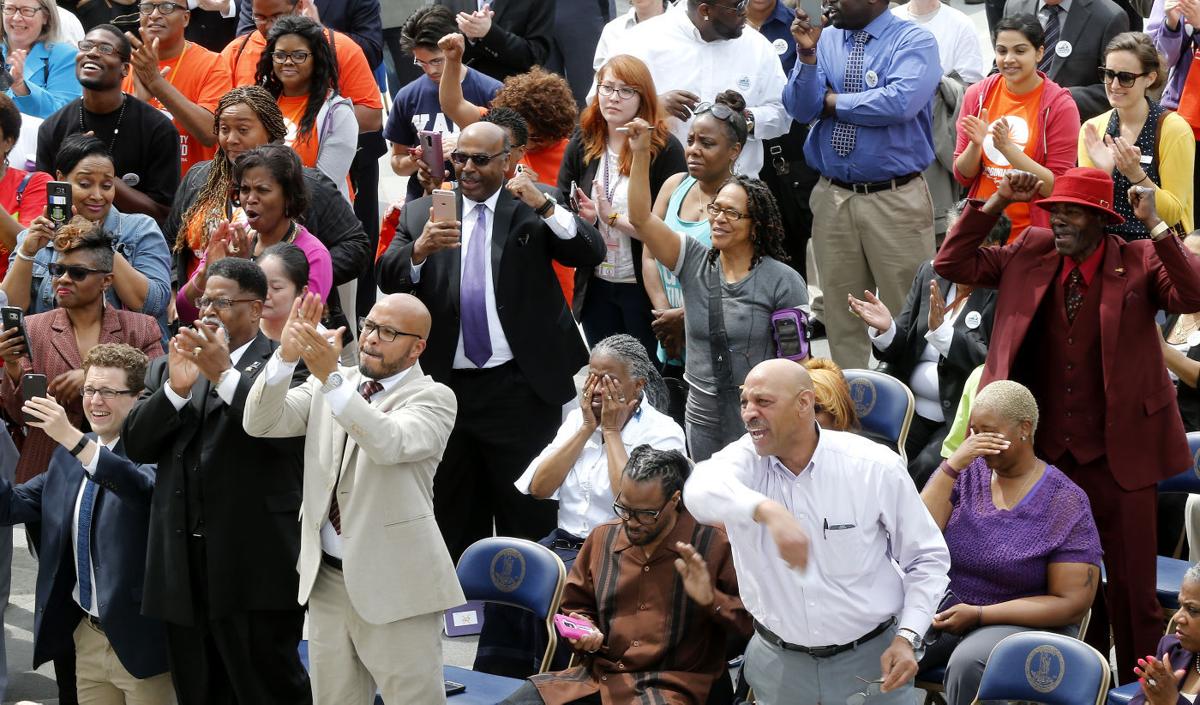 The crowd reacted Friday during the governor’s voting rights announcement at the Capitol. Felons affected by the order must register to vote before participating in elections. 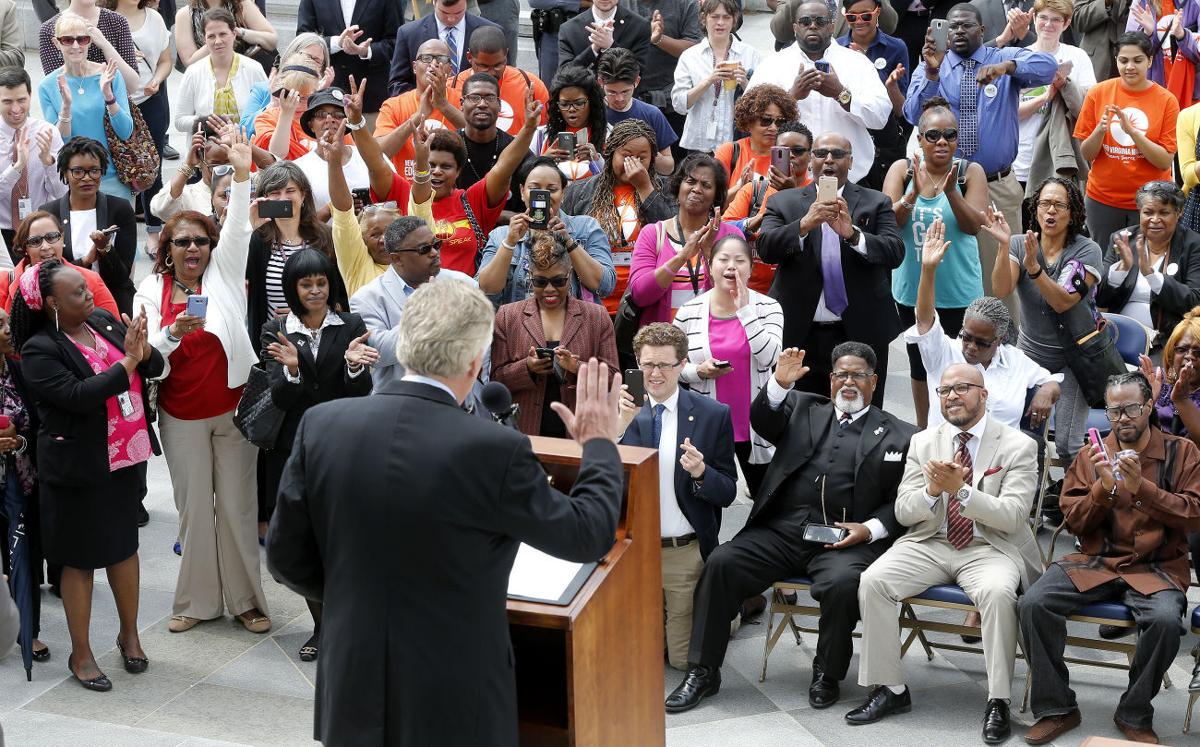 On April 22 at the Capitol, Gov. Terry McAuliffe announced he was restoring the voting and civil rights of an estimated 206,000 felons who had served their time.

The move, coming in a presidential election year, outraged Republicans who accused McAuliffe of abusing his power to help longtime ally Hillary Clinton win a battleground state by putting more likely Democratic voters on the books.

The governor’s order applies to all violent and nonviolent felons who had finished their sentence and supervised release as of Friday, even those who have not applied for a restoration of rights. Previous Virginia governors have restored rights on an individual basis, but none has done it for an entire category of offenders with one pen stroke.

The order stops short of creating automatic restoration of rights for all ex-offenders, because McAuliffe will have to sign similar orders on a monthly basis moving forward. Still, the order is a historic shift away from Virginia’s policy of lifetime disenfranchisement for those convicted of serious crimes.

“We benefit from a more just and accountable government when we put trust in all of our citizens to choose their leaders,” McAuliffe said Friday from the steps of the state Capitol, where a gospel choir warmed up a jubilant crowd. “It has taken Virginia many centuries, unfortunately, to learn this lesson. But today, we celebrate its truth.”

The action, which comes just days after the General Assembly wrapped up the 2016 legislative session, has the potential to expand the state’s voter rolls, currently estimated at about 5.4 million, by as much as 3.8 percent.

Virginia is one of 10 states that do not automatically restore rights upon completion of a felony sentence and one of only four states that require an application by the felon and action by the governor, according to the McAuliffe administration, which cited research showing one of every five African-Americans of voting age in Virginia has lost the right to vote.

Supporters praised McAuliffe for what they characterized as a bold step that will give ex-offenders a chance to fully participate in civic life. Opponents called it a potentially unconstitutional overreach that will further strain the relationship between the governor and the Republican-controlled legislature.

McAuliffe's surprise announcement has Republicans seeing red - not just the partisan color-code variety - and is certain to make Virginia's already-bitter politics more so.

In his speech, McAuliffe anticipated a strong response from Republicans, who said the order’s lack of distinction between violent crimes and less serious offenses will give murderers and rapists the right to vote, serve on juries, hold public office and notarize documents.

“There may be some individuals who will try and demagogue this issue and will make reckless accusations,” McAuliffe said. “Our action today does not pardon or change the sentence for any man or woman affected by this plan. These individuals have completed their sentences. They have atoned for their actions.”

Ex-offenders affected by Friday’s order must register to vote before participating in elections. Several Democratic-aligned organizing groups were in the crowd for Friday’s announcement, registering some attendees on the spot.

Speaker of the House William J. Howell, R-Stafford, blasted the order as a political ploy to boost Democrats’ chances in November.

“The singular purpose of Terry McAuliffe’s governorship is to elect Hillary Clinton president of the United States,” Howell said. “This office has always been a steppingstone to a job in Hillary Clinton’s Cabinet.”

“Considering that the entire General Assembly was in session just two days ago, the timing of this action should give all legislators pause,” said Senate Majority Leader Thomas K. Norment Jr., R-James City. “Perhaps this governor does not expect to have to work with the General Assembly next session, as he might be planning on an appointment to an office headquartered in a different capital city.”

Clinton praised the move on Twitter, saying: “Proud of my friend (Terry McAuliffe) for continuing to break down barriers to voting.”

With Virginians choosing a new governor in 2017, McAuliffe’s successor could choose not to continue the policy.

“I believe in redemption and reconciliation and that a review of restoration of rights for nonviolent felons who’ve paid their debt to society deserves debate, but this sweeping action benefiting convicted rapists, murderers and child molesters is a reckless abuse of executive power,” said Ed Gillespie, a GOP gubernatorial hopeful and former chairman of the Republican National Committee.

McAuliffe’s order does not restore firearm rights. The ability to purchase and own a gun still would require court action.

The ACLU of Virginia, which has pressed several governors on the issue, said McAuliffe’s action “matched our hopes and exceeded our expectations.”

“Today’s executive order reflects the governor’s recognition that the depth of disenfranchisement in Virginia and its deep roots in Virginia’s Jim Crow past required bolder executive action for progress to be made,” said Claire Guthrie Gastañaga, executive director of the ACLU of Virginia.

The governor said he ensured he was on “solid legal and constitutional grounds,” but Republicans pointed to a 2010 letter to the ACLU from an attorney for Gov. Timothy M. Kaine, a Democrat, stating that a blanket restoration of rights would amount to a “troubling” rewrite of state law and the Constitution.

McAuliffe said he consulted with Attorney General Mark R. Herring and A.E. Dick Howard, an expert on the Virginia Constitution and professor at the University of Virginia School of Law.

In an interview, Howard said unequivocally that McAuliffe has the authority to restore rights for a large group rather than an individual.

“There is simply no question about that,” Howard said.

He also spoke of the historic significance of the occasion in relation to Virginia’s 1901-1902 constitutional convention, which set up poll taxes, literacy tests and disenfranchisement for felons as barriers for African-American participation.

“Today, the last ghost of the 1902 convention was buried,” Howard said.

Levar Stoney, a Richmond mayoral candidate who worked with McAuliffe to restore rights for 18,000 ex-offenders as secretary of the commonwealth, read a quote from then-legislator Carter Glass about the voting plan adopted at the 1902 convention.

“This plan will eliminate the darkey as a political factor in this state in less than five years, so that in no single county will there be the least concern felt for the complete supremacy of the white race in the affairs of government,” Stoney said as he introduced the governor. Public service, he said, is about “giving voice to the voiceless and righting the wrongs.”

Speaking in the former capital of the Confederacy, McAuliffe and others drew parallels to the Civil War.

“Not long after President Abraham Lincoln celebrated emancipation with former slaves gathered not 20 yards from where I’m standing, Virginia initiated a campaign of intimidation, of corruption, of violence aimed at separating African-Americans from their constitutional right to vote,” McAuliffe said.

Previous governors have said they thought a wholesale restoration of rights would require a change to the Virginia Constitution, but recent governors have found ways to accelerate and accomplish part of the goal through an exercise of executive authority.

Gov. Mark R. Warner, a Democrat, took steps to simplify the cumbersome process, which could take years to initiate and months to complete. Kaine shortened the waiting period for those released from prison before applying for a restoration of rights.

Gov. Bob McDonnell, a Republican, made prisoner re-entry and rehabilitation a priority of his administration. He reduced the processing time of restoration applications and automatically restored rights on an individual basis to nonviolent felons who had completed their sentence, probation and paid their court costs and fines, resulting in restoring the rights of more than 6,800 Virginians.

The McAuliffe administration simplified and dramatically accelerated the process, reducing the application to one page from 13 and shortening from five years to three years the time period in which a felon must wait to apply for reinstatement.

The current administration also removed drug offenses from the list of those considered violent felonies not eligible for restoration and said rights can be restored even if a felon has not completed payment of court fees and restitution.

Speaking to reporters, McAuliffe denied that the order was motivated by the presidential race and said he had not thought about the political impact.

“There’s elections every year in Virginia,” McAuliffe said. “So one year versus another doesn’t really matter.”

He also said he saw no need to distinguish between violent and nonviolent crimes.

“You can’t be a second-class citizen. Once you’ve paid your time, there’s no difference to me,” McAuliffe said. “We want you back. We want you to be a productive member of society.”

Michael Carter felt a brief flash of relief before searing grief consumed him. His son’s life had ended, but so, too, had the nights spent wondering when police would show up at his home to tell him Graham had fatally overdosed.

HIGH POINT, N.C. — Keith Allen Harward enjoyed the laughter of children and the smell of wat…

In My Shoes: Accepting that your son will be happier as your daughter

EDITOR’S NOTE: At her request, we are not identifying the writer of this column because her family is not yet ready to publicly share its story.

A CSX crew abandoned a train for hours Saturday, blocking an intersection in Ashland and pre…

Williams: Voting rights should be issue of principle, not partisanship

Why ask why? There’s been lots of questioning of Gov. Terry McAuliffe’s motives in signing an executive order to restore the vote for 206,000 ex-offenders who have paid their debt to society — completing their sentences and supervised release — after felony convictions.

Gov. Terry McAuliffe’s order restoring the voting rights of more than 200,000 felons is the equivalent of vigilante justice. While the ends ar…

At the state Capitol in Richmond on April 22, Gov. Terry McAuliffe held up the order he signed to restore voting rights to 206,000

The crowd reacted Friday during the governor’s voting rights announcement at the Capitol. Felons affected by the order must register to vote before participating in elections.

On April 22 at the Capitol, Gov. Terry McAuliffe announced he was restoring the voting and civil rights of an estimated 206,000 felons who had served their time.