In call for unity, McAuliffe urges lawmakers to avoid 'political sideshows'
0 comments
Share this
{{featured_button_text}}
1 of 3 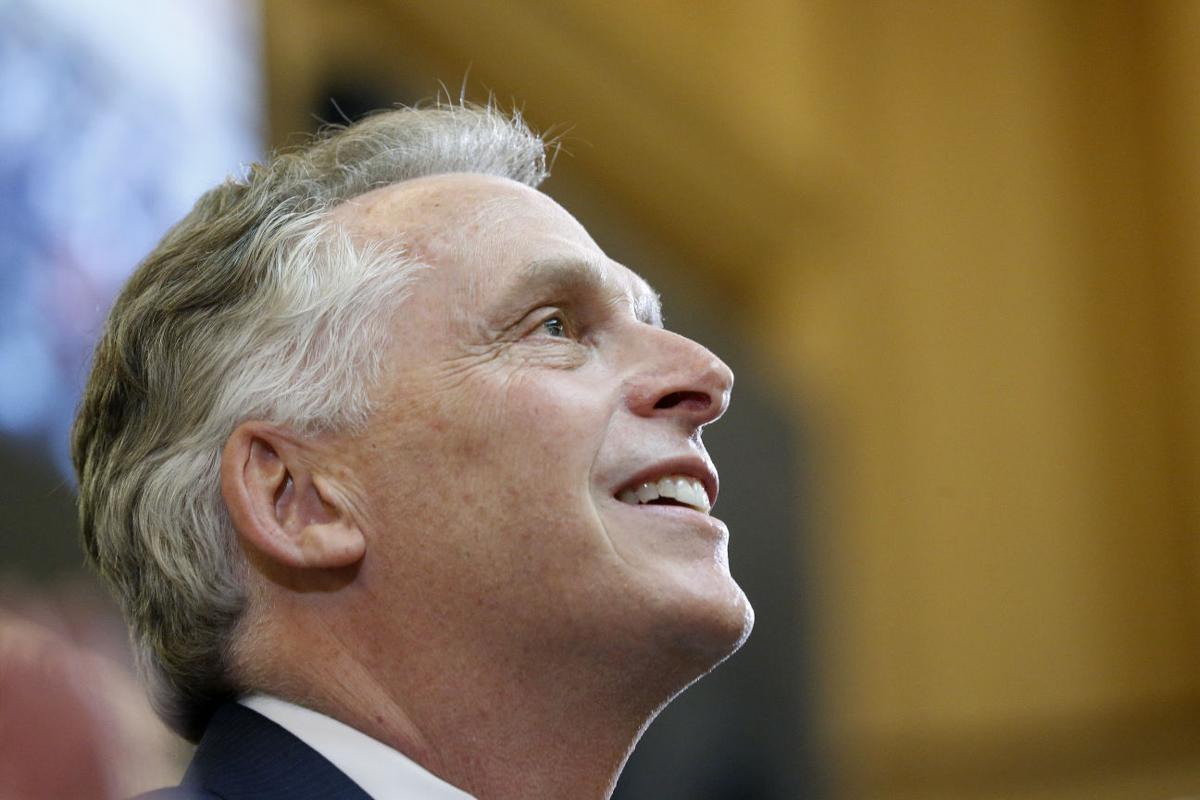 Virginia Gov. Terry McAuliffe acknowledged guests in the House Chamber at the Virginia State Capitol to as he delivered his State of the Commonwealth address, Wednesday 1/13/2016, in Richmond, VA. 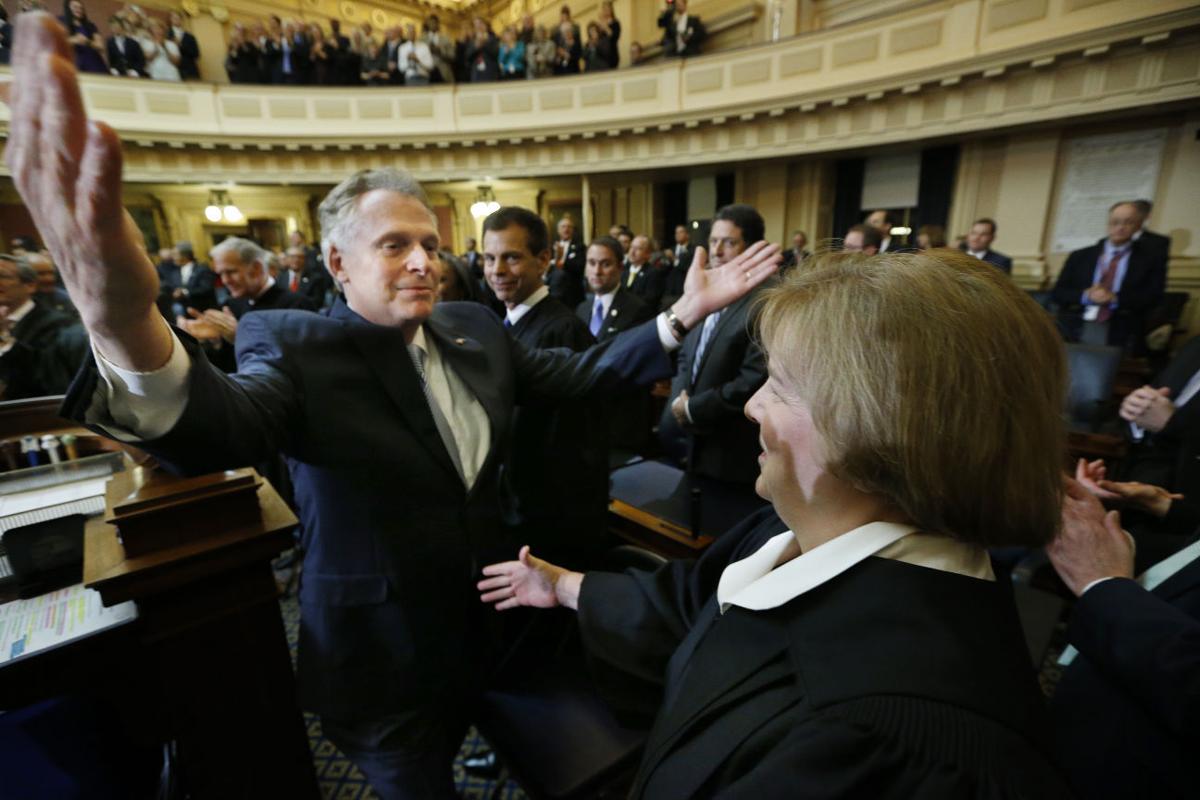 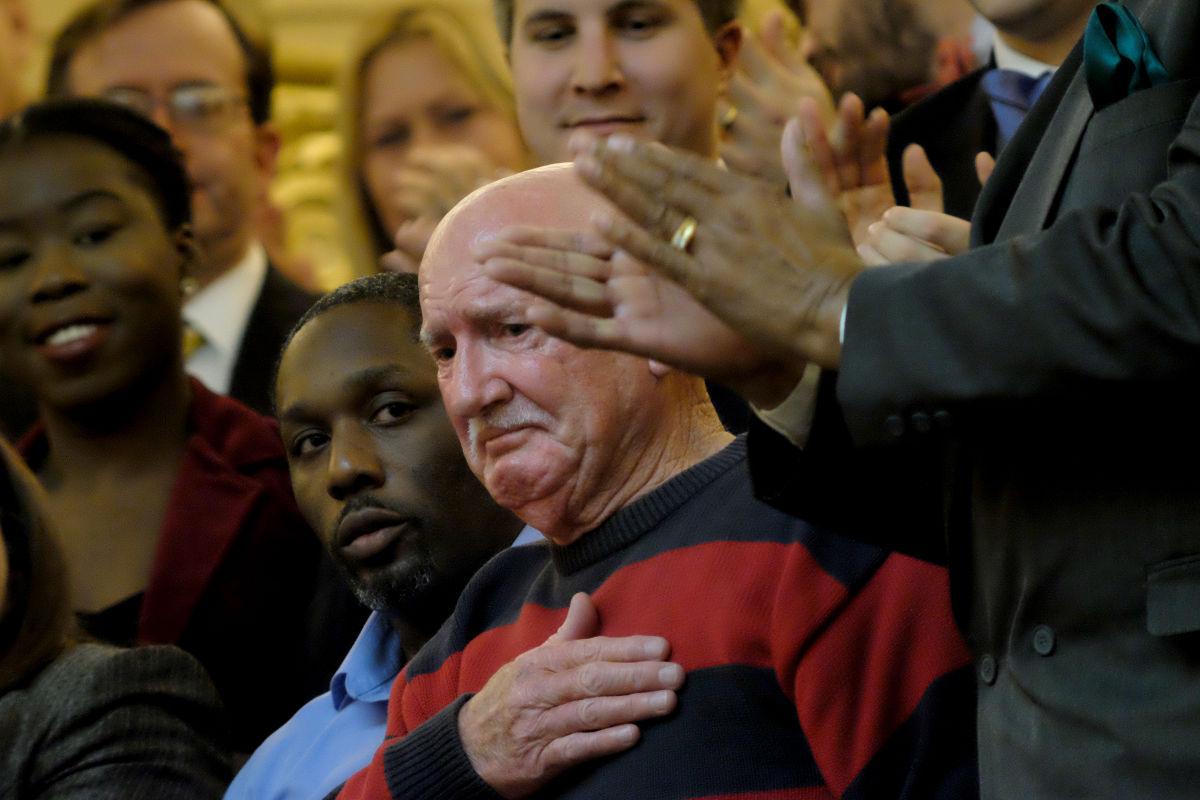 Bobby Blevins, center, hand on chest, who had his rights restored shortly after his 79th birthday, was recognized by Virginia Governor Terry McAuliffe in the House of Delegates chamber at the State Capitol in Richmond, VA Wednesday, Jan. 13, 2016, during his his State of the Commonwealth speech to a joint session of the legislature.

As he enters his crucial third year in office, Gov. Terry McAuliffe on Wednesday night called on the Virginia General Assembly to work with him to strengthen the state economy, while promising to block any efforts to curtail Democratic priorities such as gay marriage, abortion rights and gun control.

As lawmakers convened at the Capitol for the start of the 2016 legislative session, McAuliffe used his State of the Commonwealth address to hit a familiar theme: The need to grow and diversify the state economy during a two-year pause in federal spending cuts.

“It is my hope that our work together this session will be devoted to productive areas where there is room for compromise, and not political sideshows that distract from matters that demand our urgent attention,” McAuliffe said in a speech that ran a little less than an hour.

As a peace offering, McAuliffe, who recently returned from a trade mission to Cuba, turned and presented House Speaker William J. Howell, R-Stafford, with a cigar.

“Now, there’s a few more where those came from,” McAuliffe said. “We’ll negotiate that later in the session.”

McAuliffe noted that when he spoke to the legislature last year, he was dealing with a projected $2.4 billion budget shortfall, uncertainty over sequestration and seven broken ribs he suffered after being thrown off a horse during a safari in Africa. Now, the governor said, “things are looking up.”

“Our work to build a new Virginia economy is paying off. We can breathe more freely, thanks to a period of relative calm in Washington,” McAuliffe said. “And I’m happy to say that five of my ribs are now healed, and I am certainly breathing easier than I did last year.”

Over the next 60 days, the legislators’ work will focus largely on the state budget, as well as education, criminal justice reform, the mental health system, services for military veterans, economic development and transportation. In a presidential election year, some have speculated the session could produce fireworks over hot-button topics to excite both parties’ bases. But, at least in public, leaders on both sides have vowed to work together.

The governor has submitted a two-year, $109 billion budget proposal that includes significant new spending to boost research and development and realign the state’s K-12 and higher-education systems to better prepare students for in-demand jobs, specifically computer science and coding. The budget, which will outlast McAuliffe’s time in office, also includes the expansion of Medicaid under the Affordable Care Act, a key initiative for the governor that the GOP-controlled General Assembly has rejected as an ill-advised burden on state resources.

In his speech, the governor again called for Republicans to have an “open mind” on the issue, but GOP leaders have dismissed the inclusion of Medicaid as an unhelpful gimmick.

“Although the governor’s initiative to join this optional feature of Obamacare will not be part of the new budget, there will not be a legislative impasse or standoff as there was two years ago,” said Ruff.

Both legislative chambers remain under Republican control. Democrats sought to retake control of the Senate in a hard-fought election battle last year, but Republicans held their 21-19 majority.

McAuliffe vowed to veto any legislation that he sees as a setback to the goals of economic growth and opportunity.

“Specifically, I am prepared to veto bills that roll back the progress that we have made on marriage equality and women’s access to health care,” McAuliffe said. “I will also reject proposals that limit this commonwealth’s ability to keep Virginians safe from gun violence or to react to the very clear and present danger of climate change and sea level rise.”

The governor also referenced his spat with the General Assembly over the appointment of Virginia Supreme Court Justice Jane Marum Roush. The governor embraced Roush in the House chamber before he delivered his speech.

McAuliffe selected Roush for the bench in an interim appointment in July. Republican leaders in the legislature, which has ultimate authority over judicial appointments, have signaled their intent to remove Roush and appoint a different justice, arguing McAuliffe broke protocol by failing to consult them.

“Allowing politics to deny this qualified and distinguished jurist a full, 12-year term would send a dangerous message about the commonwealth’s respect for the independence of the judicial branch,” McAuliffe said.

In the response, Republicans said they expect to find common ground with the governor on funding for education, workforce development, mental health care, public safety and veterans. They also said they’ll defend the Second Amendment and other constitutional rights and review “any appointment” made by the governor to ensure it passes constitutional muster.

Bell, who is running for attorney general in 2017, said Republicans have been disappointed in executive actions taken by McAuliffe and Attorney General Mark R. Herring that Bell said raise questions about the separation of powers.

“Only 10 weeks ago, every Virginia legislator stood for election. And despite unprecedented efforts by outside interest groups, Virginians returned a Republican majority to the House and Senate,” Bell said. “We intend to represent our constituents who just voted us into office.”

After the speech, Republican leaders from both chambers said the positive elements of the speech were diminished by McAuliffe’s comments about Medicaid and the veto threats.

“I think it’s unfortunate that he did sort of throw the gauntlet down on a couple of very partisan issues,” said Senate Majority Leader Thomas K. Norment Jr., R-James City. “He knows there is going to be no Medicaid expansion in 2016. And to throw that down at that point I think neutralized a little bit of the positive aspects of his remarks.”

Republican leaders also questioned whether the state economy is truly as strong as the governor describes it.

In a more informal afternoon huddle, McAuliffe welcomed a bipartisan delegation of lawmakers to his third-floor office for a pre-session pep talk.

“You ready to go?” McAuliffe asked Norment, who was seated directly beside him.

“Are you ready yet?” Norment replied.

“I was born ready,” McAuliffe said.

The governor told the group that the two sides may not always agree, but there is agreement on “the big core issues that voters want us to focus on.”

“Let’s all gather here 60 days from today — I’ll bring the beer or champagne or whatever — and celebrate one of the best sessions in Virginia’s history.”

Photos from today's legislative session at the Virginia State Capitol.

Virginia Gov. Terry McAuliffe acknowledged guests in the House Chamber at the Virginia State Capitol to as he delivered his State of the Commonwealth address, Wednesday 1/13/2016, in Richmond, VA.

Bobby Blevins, center, hand on chest, who had his rights restored shortly after his 79th birthday, was recognized by Virginia Governor Terry McAuliffe in the House of Delegates chamber at the State Capitol in Richmond, VA Wednesday, Jan. 13, 2016, during his his State of the Commonwealth speech to a joint session of the legislature.