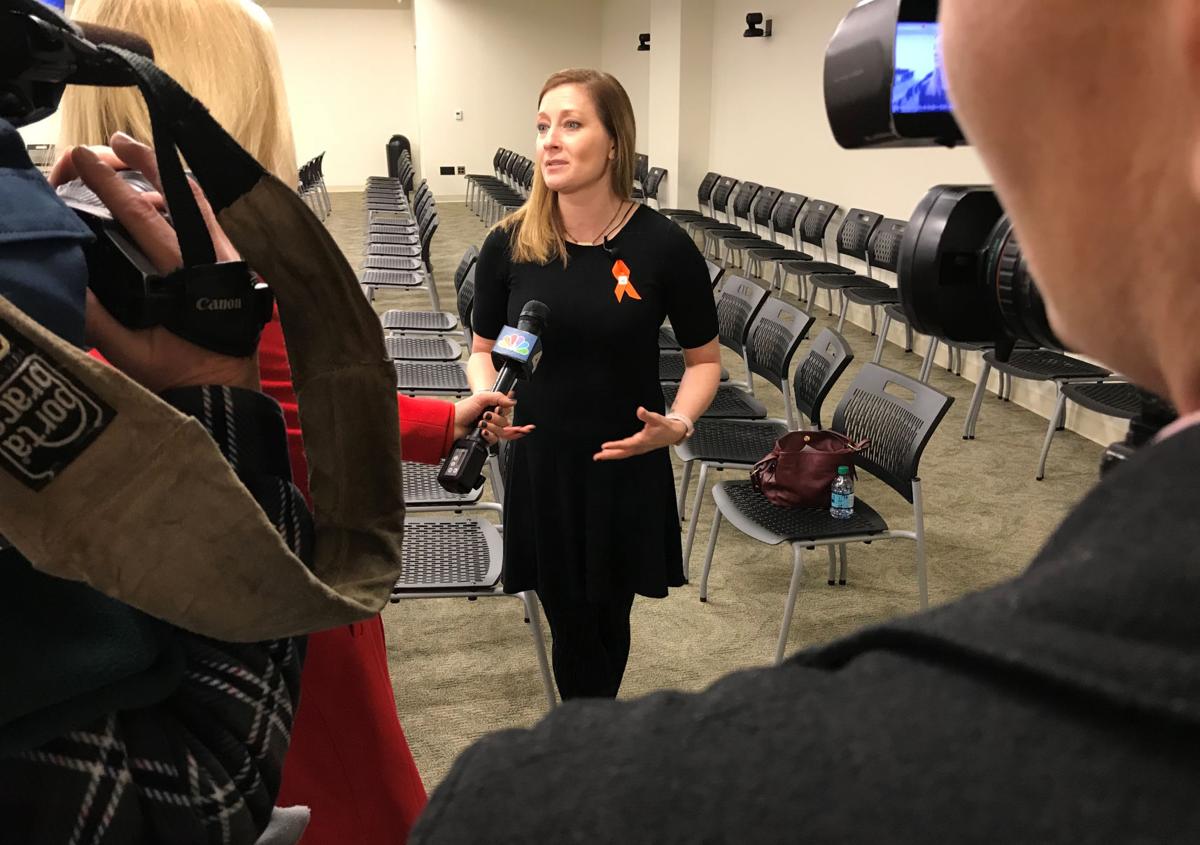 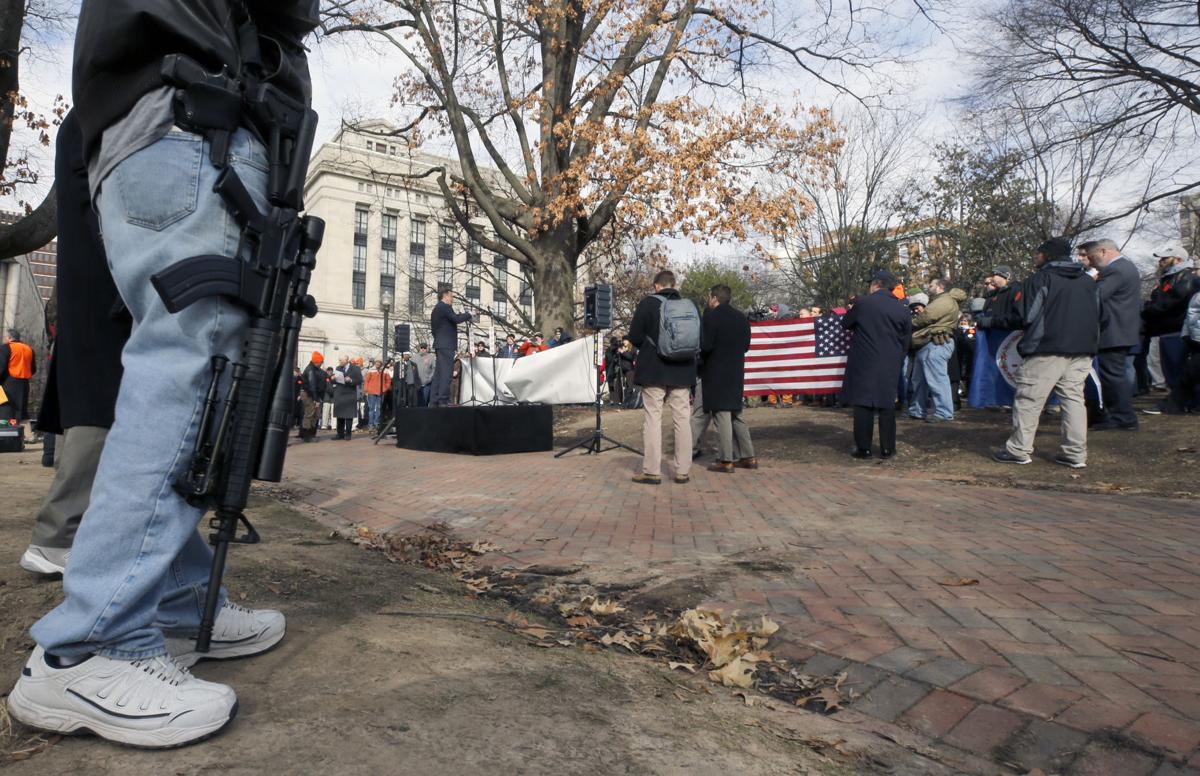 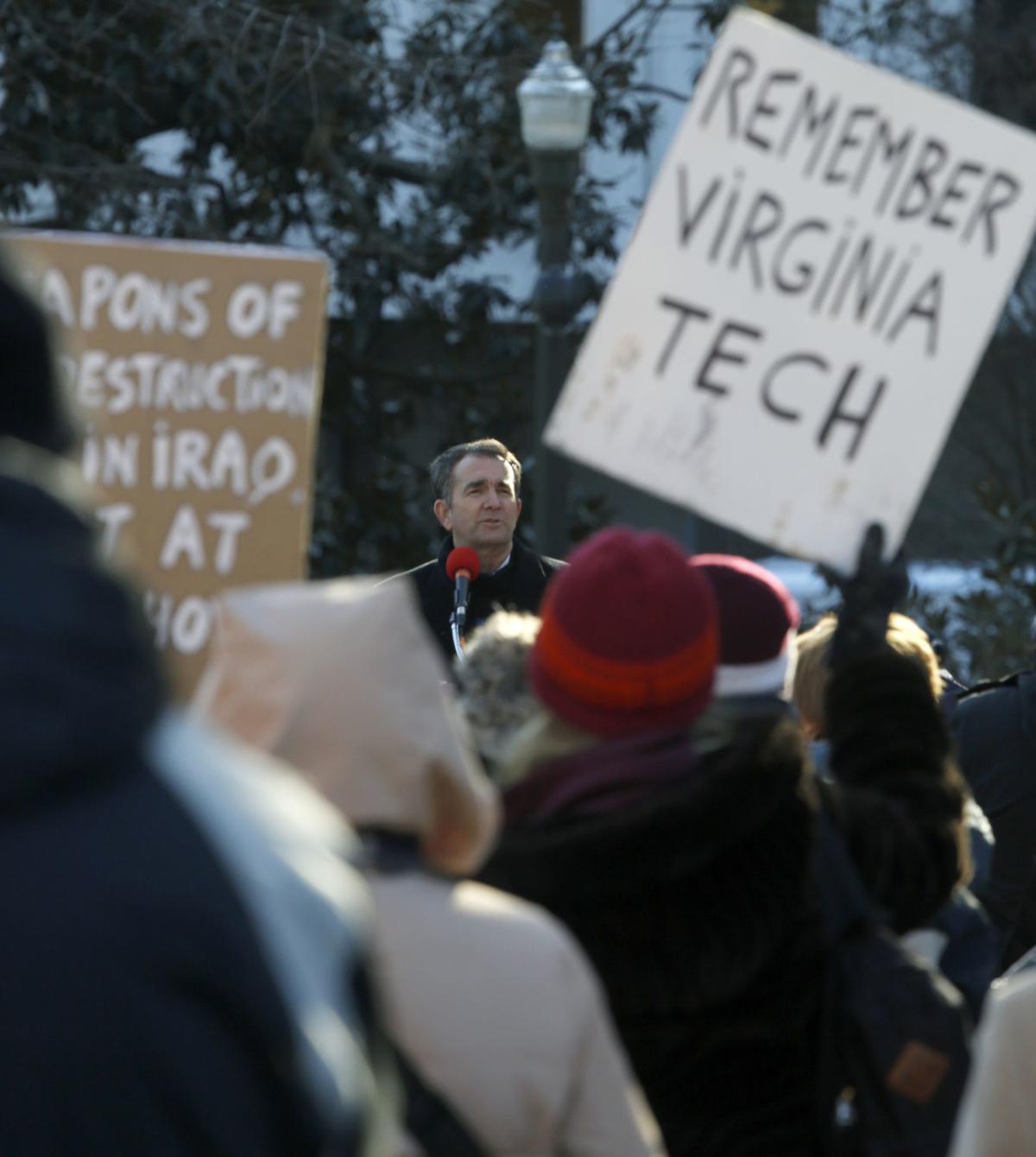 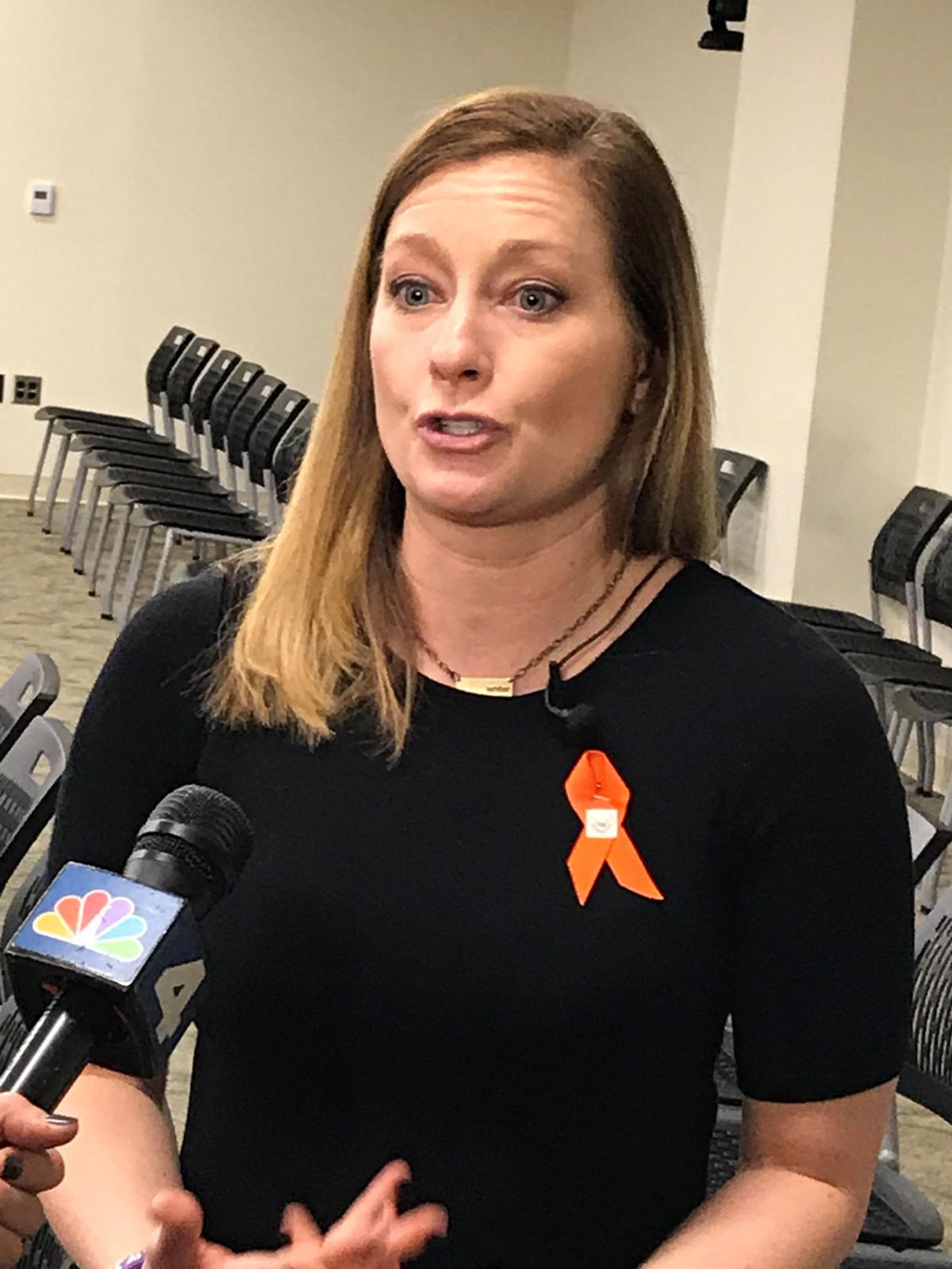 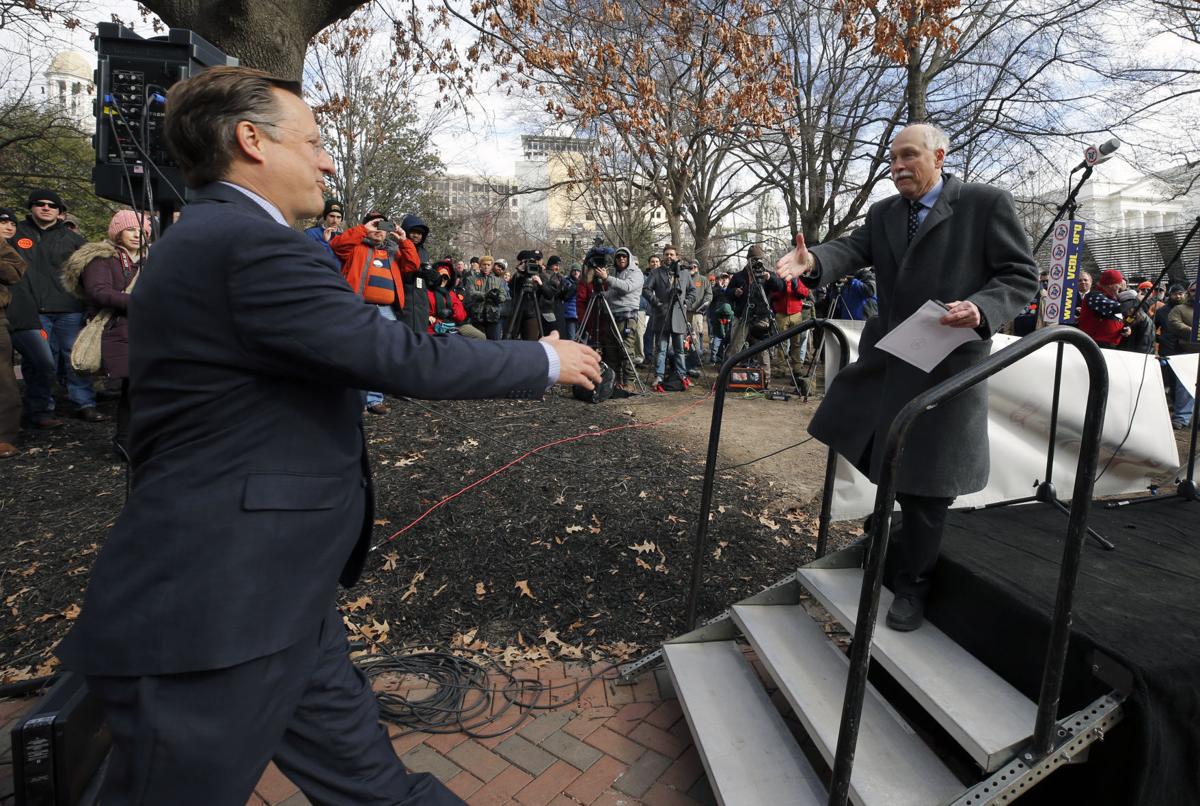 US Congressman Dave Brat , R-7th, left, reaches to shake hands with Philip Van Cleave, head of the Virginia Citizens Defense League before adressing a crowd during a pro-gun rally outside the Bell Tower at Capitol Square in Richmond, VA Monday, Jan. 15, 2018. 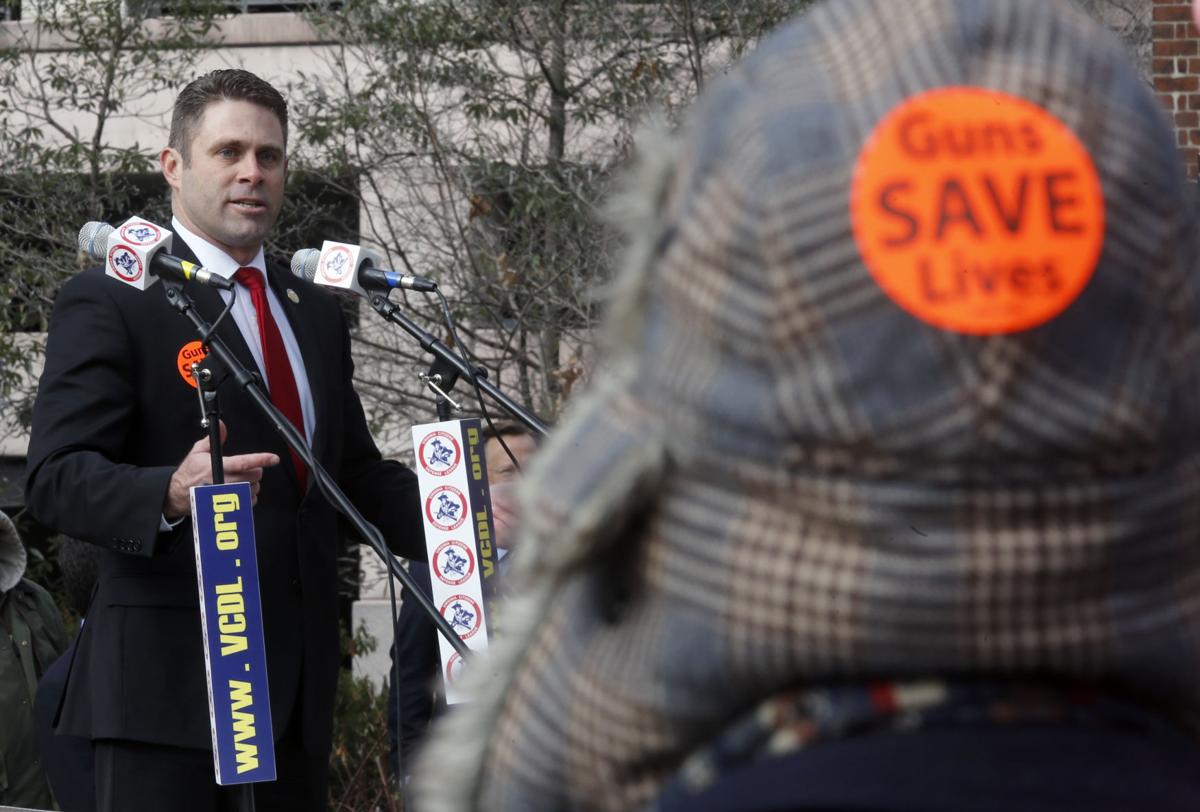 Del. Nick Freitas, R-Culpeper, adresses a crowd during a pro-gun rally outside the Bell Tower at Capitol Square in Richmond, VA Monday, Jan. 15, 2018.

Gov. Ralph Northam made a pitch for gun control at a Capitol Square rally Monday afternoon, but much of his firearm agenda had died Monday morning in a Republican-controlled Senate committee.

A Democratic bill to require universal background checks for gun purchases — a key component of Northam’s gun agenda — was defeated in the Senate Courts of Justice Committee. Another Northam-backed bill to allow localities to ban firearms at permitted events, which arose from the violent white supremacist rally in Charlottesville last year, also failed to get through the committee.

The Senate committee did approve Senate Bill 1 from Sen. Adam Ebbin, D-Alexandria, which would ban “bump stocks,” which are devices that increase the rate of fire for a weapon and were used by the gunman in the Oct. 1 concert shooting in Las Vegas. The committee reported the bill 11-4 and it will now go to the Senate Finance Committee.

During the legislature’s annual Lobby Day, backers of gun rights held a morning rally in Capitol Square. Northam and others addressed an afternoon rally against gun violence.

Cortney Carroll, 40, of Short Pump was among the concertgoers in Las Vegas. She testified before the committee about the terror that ensued and how her aunt was wounded. She said she is a Republican who supported Ebbin’s bill.

“We were untrained in a war zone,” she said. The sounds of people crying and yelling haunt her, she said.

She said country music concerts were her “happy place” and now she’s not sure she’ll ever go to a concert again. As gunfire began, she and her family crouched, then later ran, hid behind cars and dived for cover. Her aunt yelled out that she was shot. A bullet grazed her aunt above her eye.

“I can’t even describe to you the horror of looking at my aunt with blood (dripping) down her face.”

Her group hid on the floor of a men’s restroom for hours amid reports there were other shooters.

The shooter was a “horrid monster” whose bump stocks allowed him to change a semi-automatic rifle into a machine gun, she said.

Brian Moran, the state secretary of public safety and homeland security, argued in favor of the bill to require background checks. Moran held the post under former Gov. Terry McAuliffe and now Northam; the checks had been part of the McAuliffe administration agenda.

Opponents of gun control testified that most checks result in “false positives” that hinder law-abiding citizens from purchasing guns, and that the checks do little to reduce crime.

Currently, only federally licensed gun dealers are required to do a background check before selling a firearm.

Virginia State Police statistics show 3,584 gun sales through a licensed dealer were stopped in 2017 because the buyer didn’t pass a background check.

Erin Luper, a lobbyist for the National Rifle Association, said people in prison for gun crimes got their guns through theft or from family members.

“Background checks do not stop criminals from getting firearms,” she said.

Hundreds of pro-gun activists descended on the Capitol to lobby lawmakers on behalf of the Virginia Citizens Defense League, the state’s top gun rights group.

The group’s annual rally drew a handful of lawmakers who urged the crowd to keep the faith on Second Amendment rights after an election that saw Democrats sweep Virginia’s statewide offices and make major gains in the House of Delegates.

Del. Ben Cline, R-Rockingham, an avowed opponent of new gun control laws who just became the new chairman of the House committee that takes up gun-related bills, was among the first speakers to address the crowd. Cline is seeking the GOP nomination to succeed retiring Rep. Robert W. Goodlatte, R-6th.

Rep. Dave Brat, R-7th, told attendees they can prevent a repeat of the “nice little blue wave that just happened” by getting their friends to vote.

“We all believe in the right stuff. I’m going to vote for the right stuff,” Brat said. “But I won’t be voting if you don’t go do your legwork and get us hundreds of friends across the board.”

Sen. Dick Black, R-Loudoun, told a story from his time in the jungles of Vietnam when he shot an enemy soldier in the forehead and the “flash of the spray that came out” when the bullet hit its target. Black also said that the Islamic State group has put him on its list of enemies and that one day he may find terrorists on his doorstep.

“But I gotta tell you, they’re going to run into a couple of AR-15s with 40-round magazines, green-tipped bullets and a heavy load in ’em,” Black said. “And my wife knows, if somebody’s trying to force the door, you just fire through the wall and just keep firing.”

Del. Nick Freitas, a Culpeper County Republican seeking the GOP nomination for the U.S. Senate, thanked the gun rights activists for showing up after “a lot of changes” in the House “so that the freshman legislators can see how powerful this lobby is.”

At Monday afternoon’s gun control rally, speakers suggested that even if reform may not come this year, it is indeed coming.

“We know that in a few years, we will get what we want,” said Josh Horwitz, executive director of the Coalition to Stop Gun Violence.

Northam and other Democratic officials pledged to keep up the fight.

Northam said he was “just getting warmed up.”

“I’m not finished and we’ll work with our staff and look at the legislation,” Northam told reporters after the rally. “And I also have the option to introduce legislation.”

One new lawmaker unaccustomed to the old ways of the Capitol found time to attend both gun rallies.

Del. John McGuire III, a freshman Republican from Henrico County, spoke at the pro-gun rally in the morning then stood next to Democratic colleagues and listened to the speeches at the gun control rally.

“I’m here to learn everything that I can so I can be the best legislator I can be,” McGuire said in an interview after discussing why he supports the Second Amendment with constituents who attended the rally for stronger gun laws.

US Congressman Dave Brat , R-7th, left, reaches to shake hands with Philip Van Cleave, head of the Virginia Citizens Defense League before adressing a crowd during a pro-gun rally outside the Bell Tower at Capitol Square in Richmond, VA Monday, Jan. 15, 2018.

Del. Nick Freitas, R-Culpeper, adresses a crowd during a pro-gun rally outside the Bell Tower at Capitol Square in Richmond, VA Monday, Jan. 15, 2018.