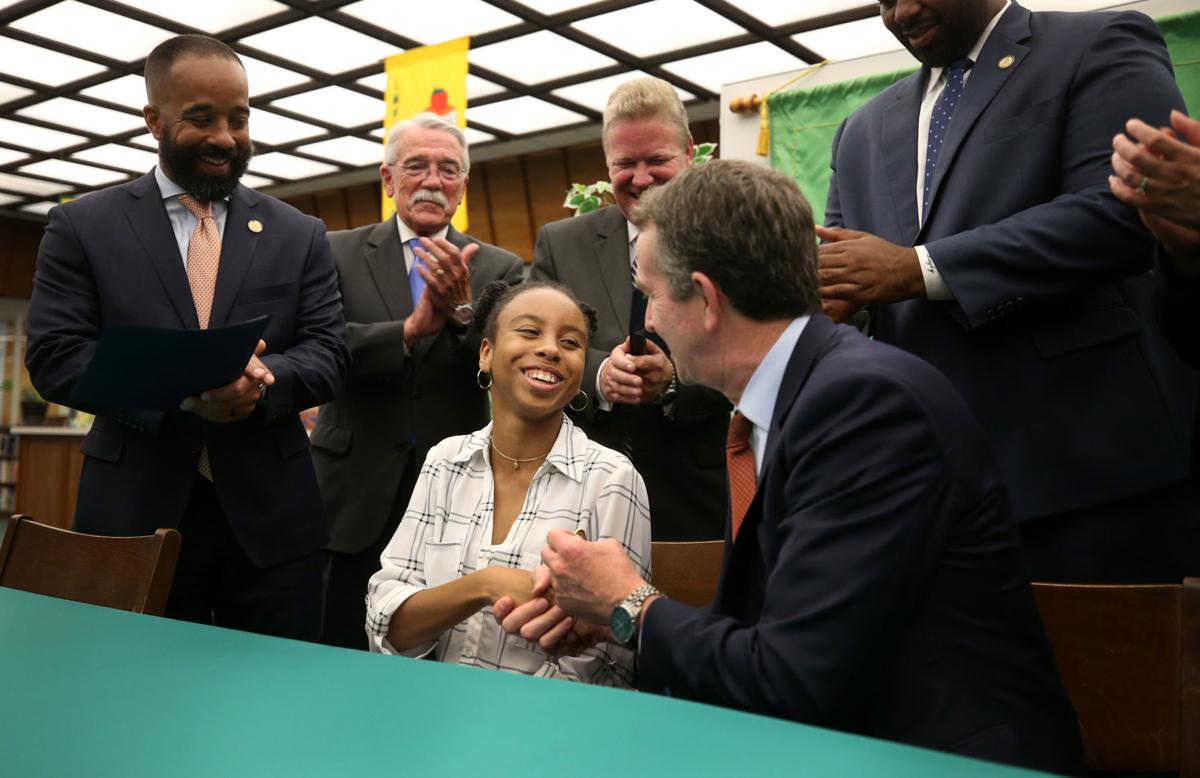 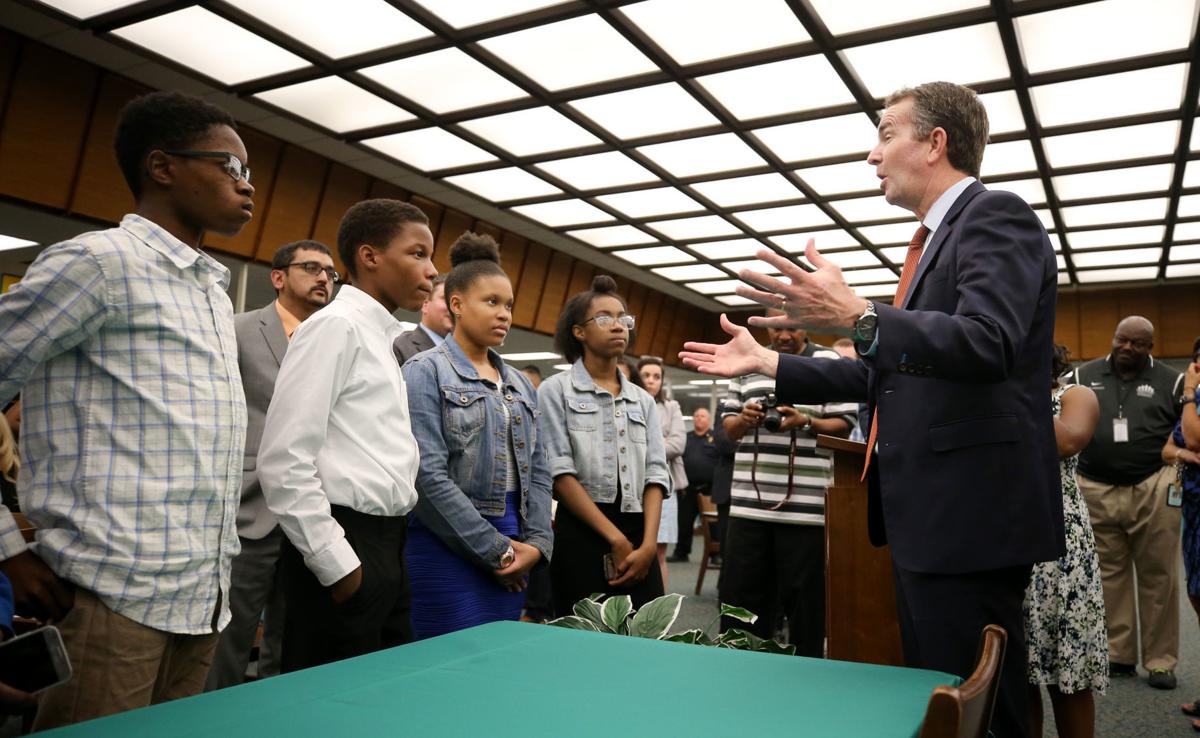 Gov. Ralph Northam talked with a group of students at Henderson Middle School on Friday. Data released in April show that every Richmond-area school division posted law enforcement referral rates at or worse than the national average. 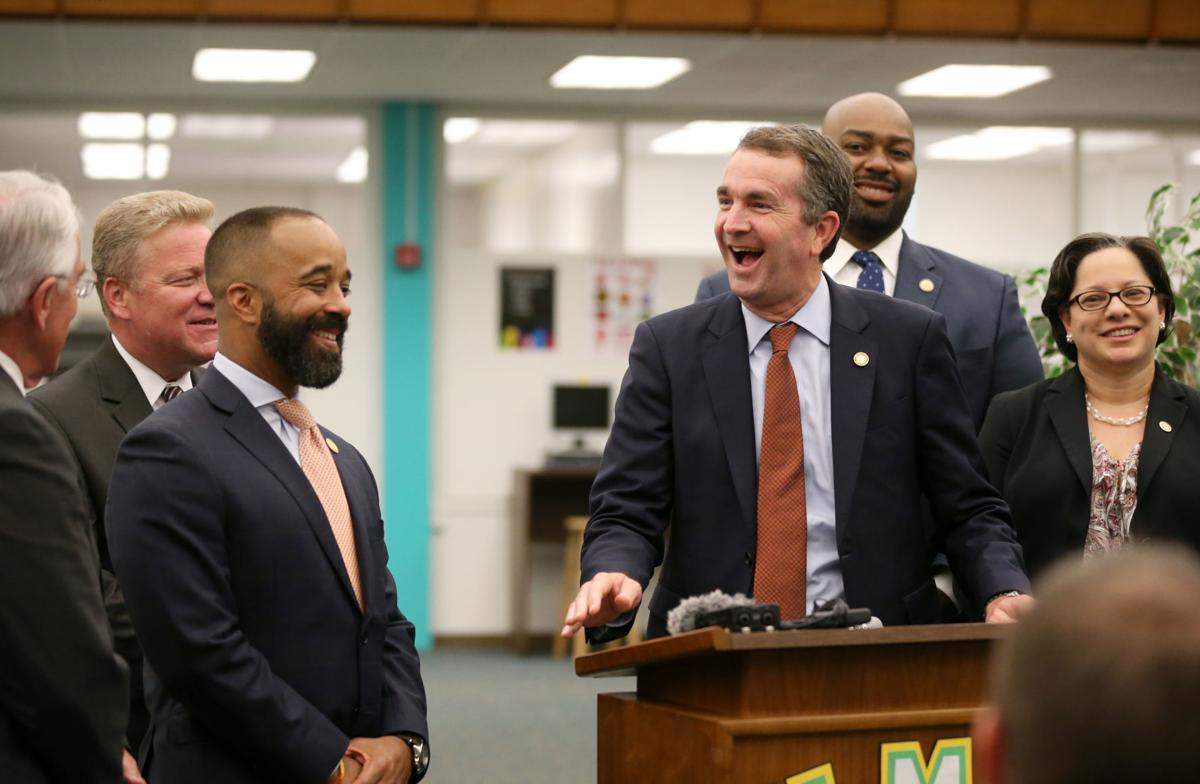 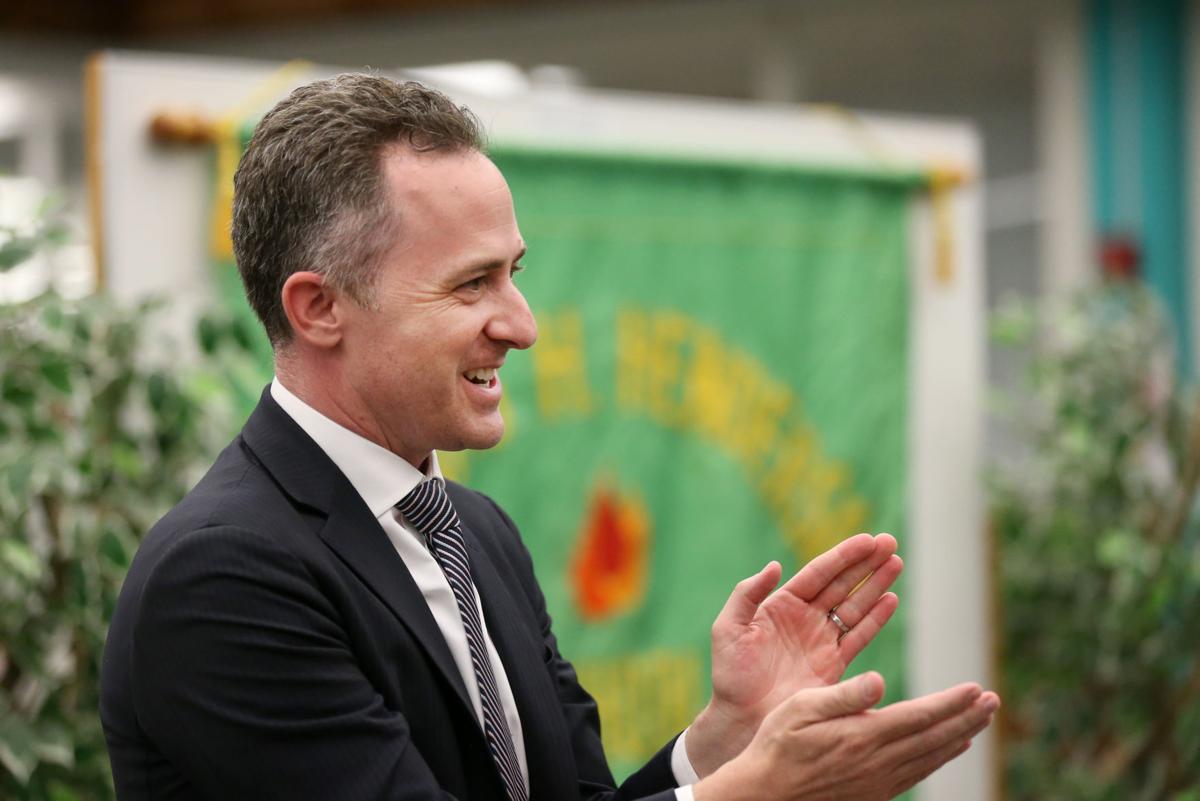 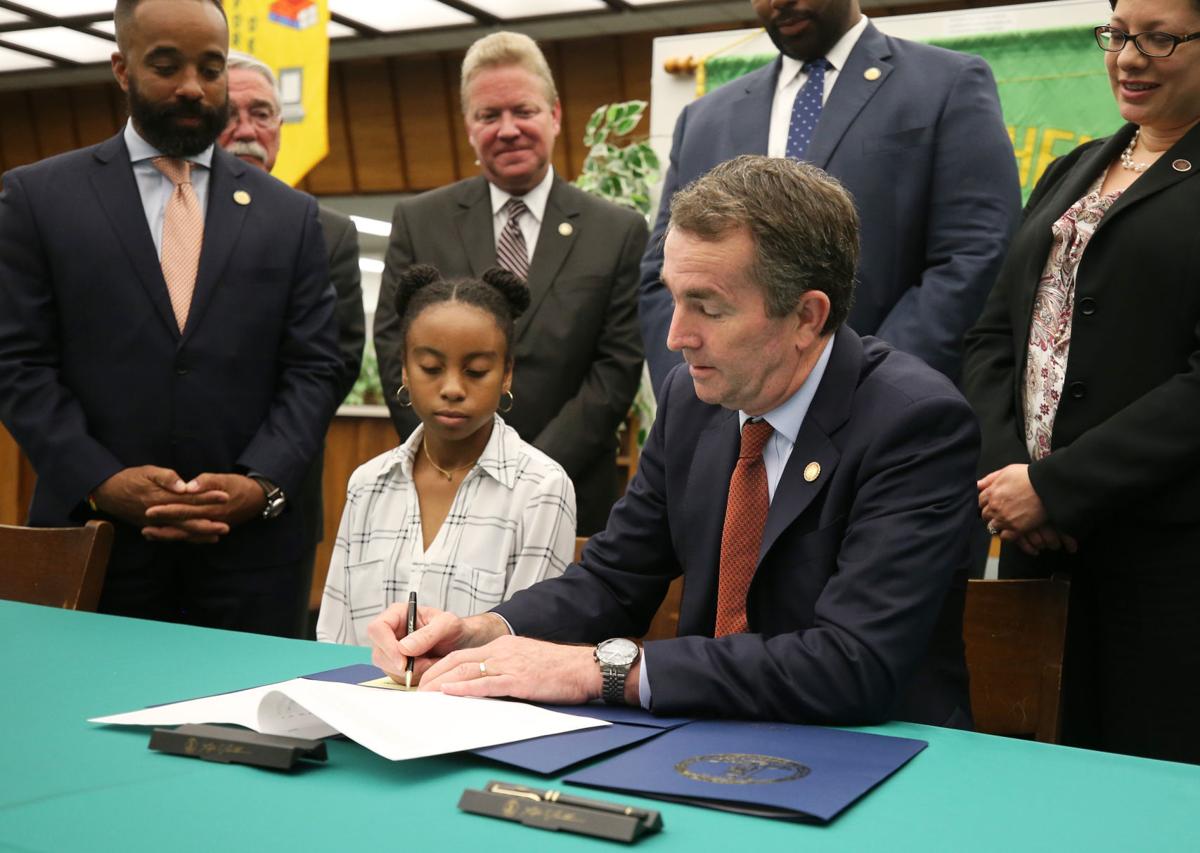 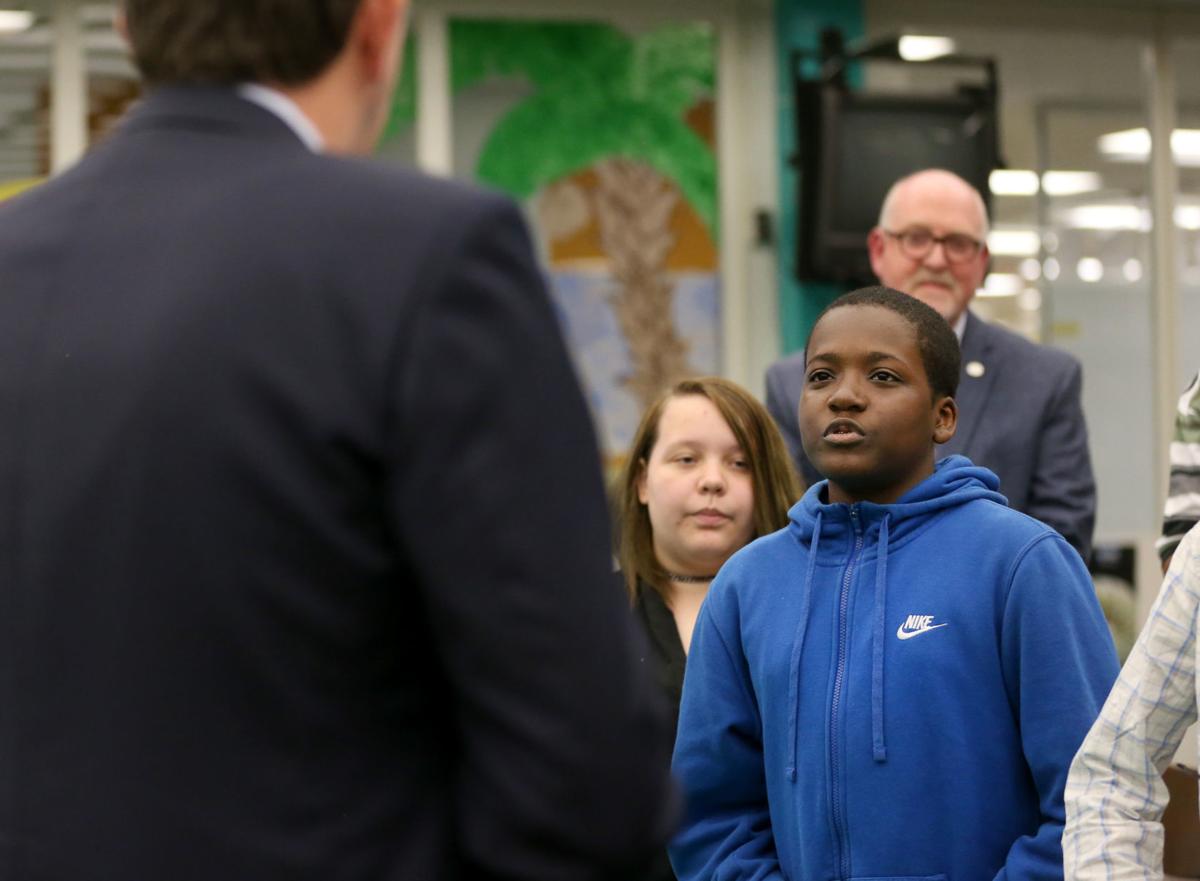 Data released by the U.S. Department of Education in April show that while black students made up 15 percent of national enrollment in 2015-16, they accounted for 31 percent of students referred to law enforcement or arrested that year.

Every Richmond-area school division posted law enforcement referral rates at or worse than the national average.

Gov. Ralph Northam on Friday signed two bills regarding student discipline and suspensions, one barring school divisions from suspending students in pre-K through third grade for more than three days, and another that cuts the maximum length of a long-term suspension from 364 calendar days to 45 school days.

“There is power in every child,” the governor said. “We want to keep our children in school.”

Northam — joined by legislators, state officials and Richmond Public Schools representatives — signed the two bills in a ceremony in the library of Richmond’s Henderson Middle School.

House Bill 1600 from Del. Jeff Bourne, D-Richmond, limits the length of a long-term suspension — which is currently classified as 11 school days to 364 calendar days — at 45 school days, except for some instances.

Sen. Bill Stanley, R-Franklin, carried Senate Bill 170, the bill addressing suspensions and expulsions for pre-K through third grade. The bill prohibits them from being suspended for more than three school days or from being expelled, except for drug and firearm offenses.

“These suspensions were hindering [the opportunity to succeed],” Stanley said at the bill signing Friday.

The architect of the bills, Amy Woolard, a staff attorney and policy coordinator at Virginia’s Legal Aid Justice Center, agrees.

“Exclusionary discipline is myopic and harmful. We cannot continue to use access to education as a punishment for student conduct and expect positive results from either students or schools,” she said upon the release of a report she authored in October.

“When children are suspended from school, they are more likely to experience academic failure, drop out of school, have substance abuse issues, have mental health needs, and become involved in the justice system.”

The report outlined an increase in both out-of-school and short-term suspensions in Virginia in 2015-16. Students with disabilities were suspended about three times as often as other students, according to the report.

Pre-K through third-graders were suspended about 17,300 times, the report said.

“They should have the same opportunity to a quality education,” said Del. Richard P. Bell, R-Staunton, during the bill signing. “Suspensions and expulsions are roadblocks to that.”

Friday was “a step in the right direction,” Northam said, but lawmakers emphasized that there’s still work to do.

Bourne, who carried the long-term suspension bill, said the General Assembly must come back next session with an emphasis on funding alternative education programs to be more proactive than reactive.

“We have to not only address the symptoms but the underlying causes,” he said.

The School Board will decide Monday night what initiatives — such as the restorative justice pilot program — to fund with the one-time money.

Gov. Ralph Northam talked with a group of students at Henderson Middle School on Friday. Data released in April show that every Richmond-area school division posted law enforcement referral rates at or worse than the national average.