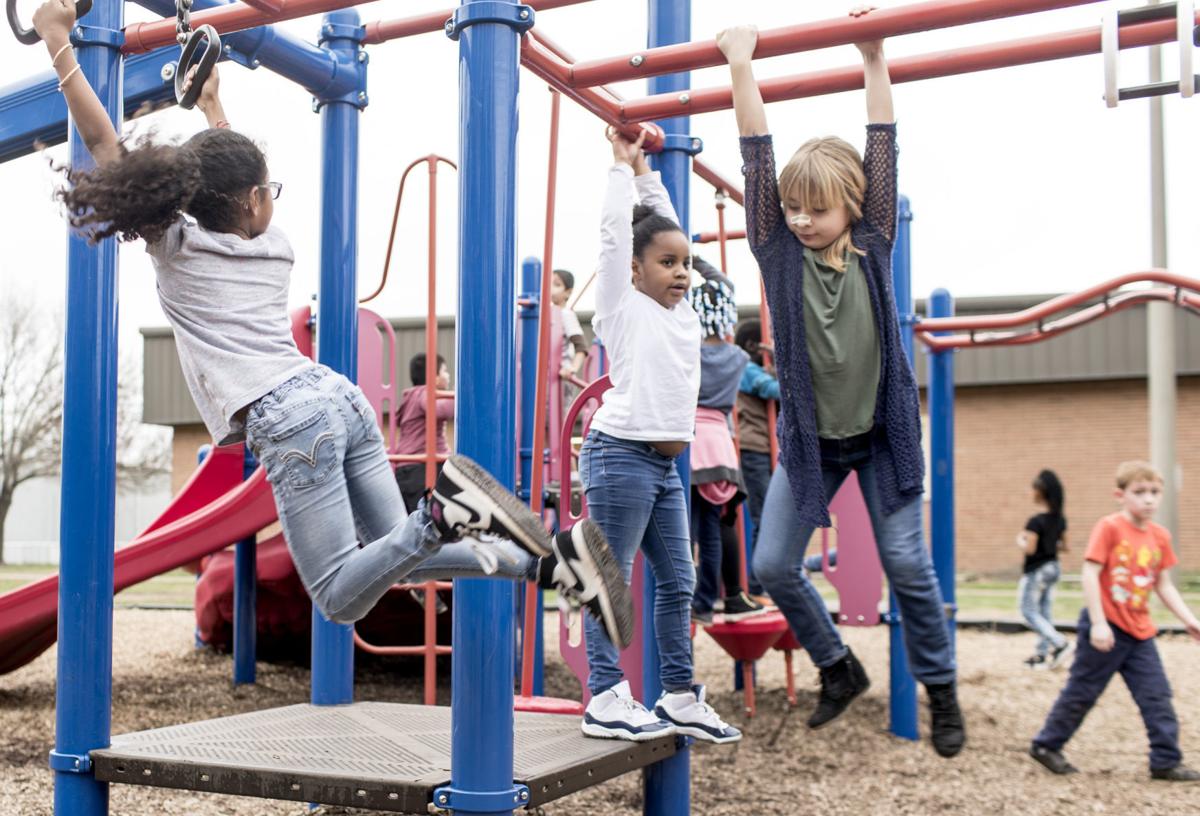 Second-graders Emani Turner (center) and Cassidy Howell (right), along with other students at Holladay Elementary, played during recess on Thursday. The Henrico County school gives students 30 minutes of recess time each day. 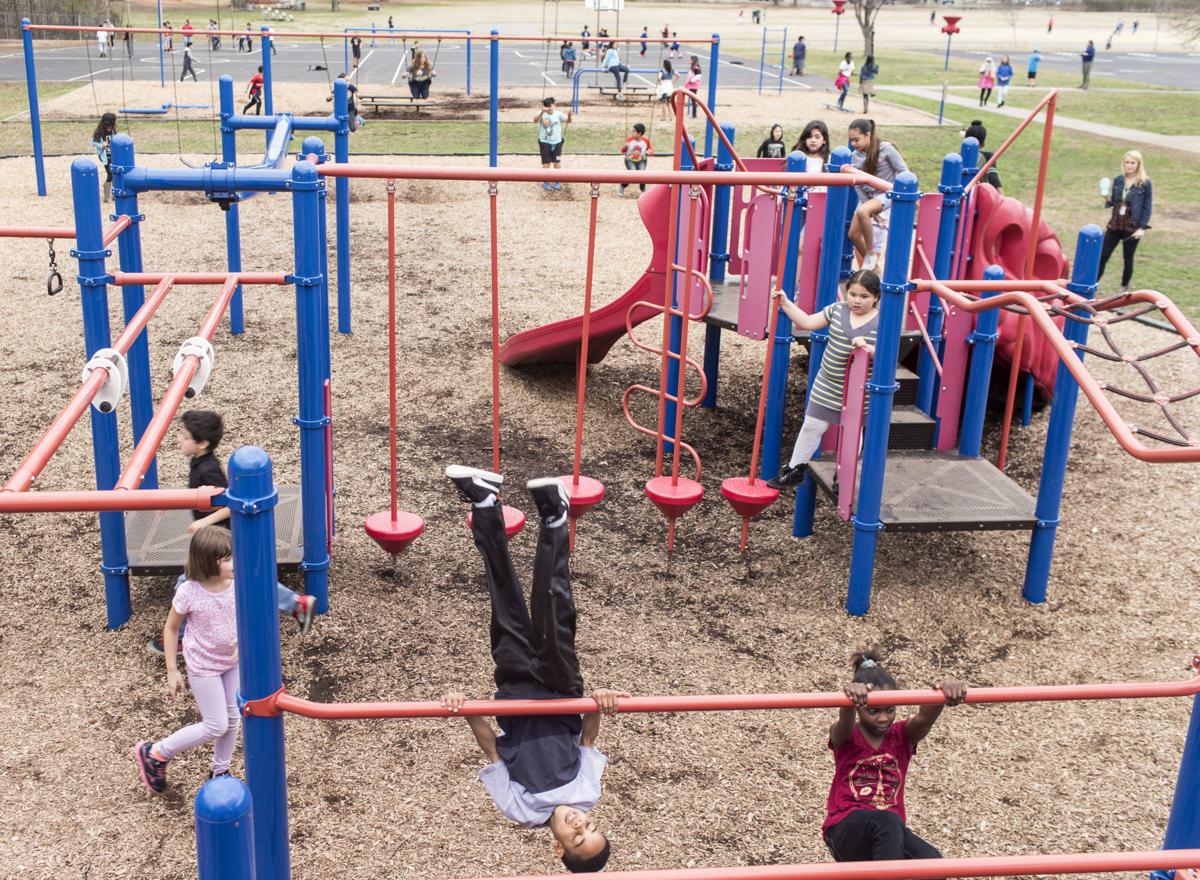 Students of Holladay Elementary School play during their recess at the school in Henrico on Thursday, Feb. 22, 2018. Students have thirty-minute recess each school day. "Recess is something that helps us spend energy so we can learn rest of the day," said Clarissa Hutchinson, a third grader.

Barbara Larrimore wondered why her oldest son had only 15 minutes of recess. She wanted him to have more, so in the fall of 2016 the mother of three started advocating for more recess.

“We need to address the whole child,” said Larrimore, of Lake Ridge. “This is just common sense.”

Now, less than two years later, two bills that would permit Virginia school boards to increase recess times in elementary schools are making their way through the General Assembly with little opposition. Advocates like Larrimore have been joined by lawmakers in saying elementary school students need more unstructured learning.

Del. Karrie Delaney, D-Centreville, is carrying the House of Delegates version of the recess bill, while Sen. Chap Petersen, D-Fairfax, carries the Senate version. Delaney, a mother of two, said her interest in seeing more recess in elementary schools came as a mother and advocate first.

“You see your children do better when they have the opportunity to run around and release energy,” she said. “They perform better.”

She added: “Now to have the opportunity to advocate for this as a legislator is really exciting.”

Delaney’s bill, House Bill 1419, and Petersen’s bill, Senate Bill 273, would allow recess to be counted as instructional time. Currently, local school boards must allot a set amount of classroom instructional time each year. Recess does not count toward that time.

Delaney’s bill adjusts the time allotted for the core subjects — English, math, science and social studies — to allow for 20 more minutes per day of recess. Petersen’s bill does not include set instructional time for the subjects.

“We don’t want to cut into programs like P.E., music and art — those are integral parts of the school day,” she said.

The bills are not mandates, meaning school boards would have the option to authorize the unstructured recess as instructional time.

The House bill passed the chamber on a 97-3 vote and was unanimously approved by the Senate Education and Health Committee last week. Petersen’s Senate bill made it through the Senate unanimously, and a House subcommittee unanimously recommended its reporting to the full chamber last week.

“It’s a bill everyone relates to,” Delaney said. “We can all think back to our childhood and remember needing that free time.”

A study from the American Academy of Pediatrics showed that elementary-aged children who had a daily recess time of more than 15 minutes showed better classroom behavior. The academy said in a policy statement in 2013 that “recess is a necessary break in the day for optimizing a child’s social, emotional, physical, and cognitive development.”

“When we look at recess, it’s for the physical activity, but it’s also a break from school — a time to allow the body and mind to rest and to socialize with friends,” said Cass Isidro, the executive director for the Safe Routes to School National Partnership and an advocate for children’s health. “The break from class actually improves a child’s time on task, so the ability to focus on what they’re doing in the classroom and to be attentive actually increases with those breaks from class.”

Emily Dolan, a mother and the founder of More Recess for Richmond City Public Schools, compared the school day to an adult’s workday.

“I have yet to meet an adult who can sit in a class for six to eight hours a day without complaining how exhausting it is,” Dolan said. “Our work environments are not set up like that, so why do we expect our children to do that?”

The full Senate will soon hear Delaney’s bill, and the House Education Committee will take up Petersen’s bill next week.

Said Larrimore: “We just need to do what’s right for kids and let them get out.”

Second-graders Emani Turner (center) and Cassidy Howell (right), along with other students at Holladay Elementary, played during recess on Thursday. The Henrico County school gives students 30 minutes of recess time each day.

Students of Holladay Elementary School play during their recess at the school in Henrico on Thursday, Feb. 22, 2018. Students have thirty-minute recess each school day. "Recess is something that helps us spend energy so we can learn rest of the day," said Clarissa Hutchinson, a third grader.