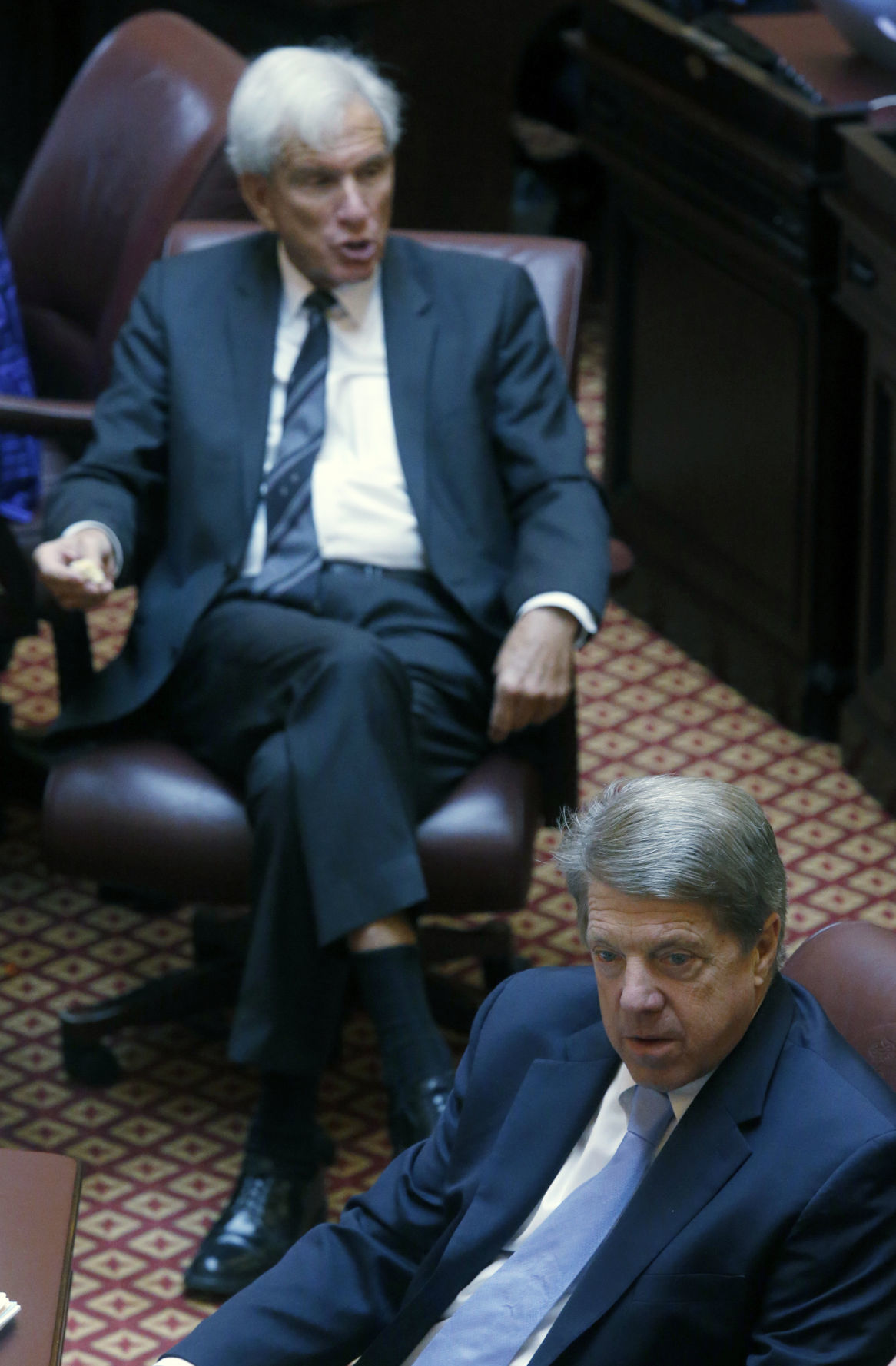 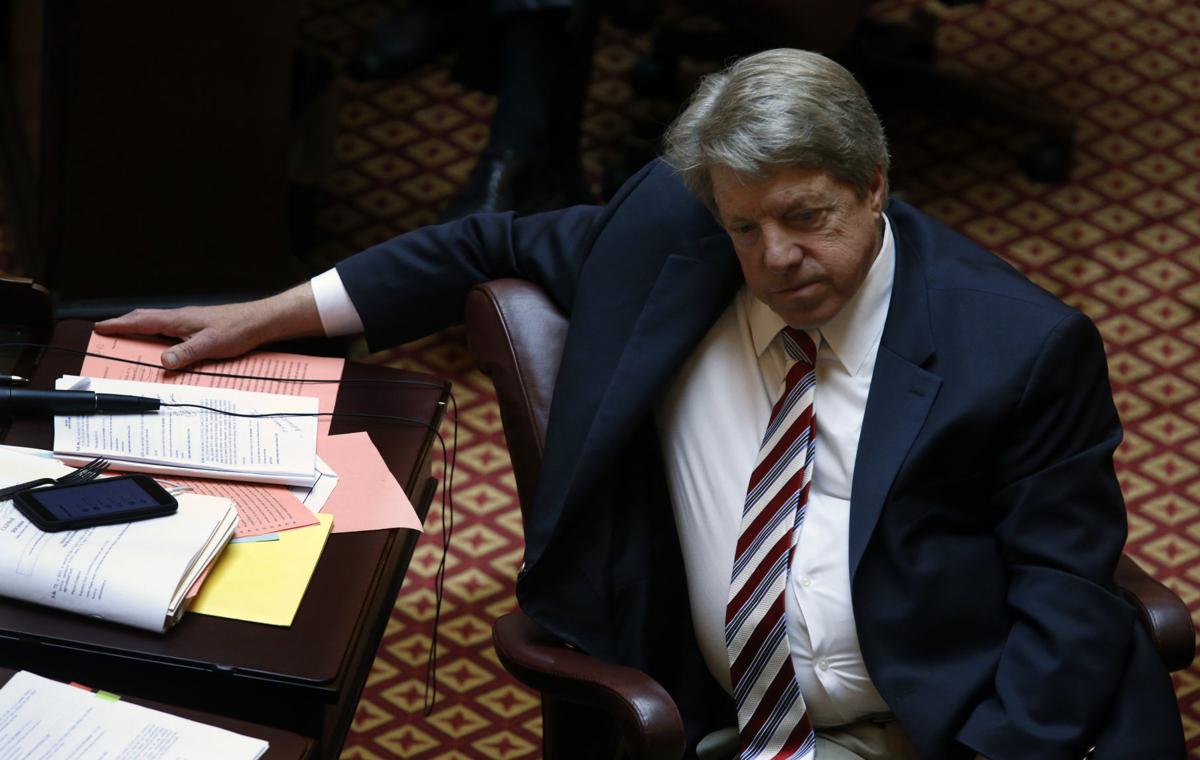 Sen. Frank W. Wagner, R-VA Beach, listens to debate on SB966, his bill dealing with utility rate regulation during the floor session of the Virginia Senate at the State Capitol in Richmond, VA Friday, Feb. 9, 2018. 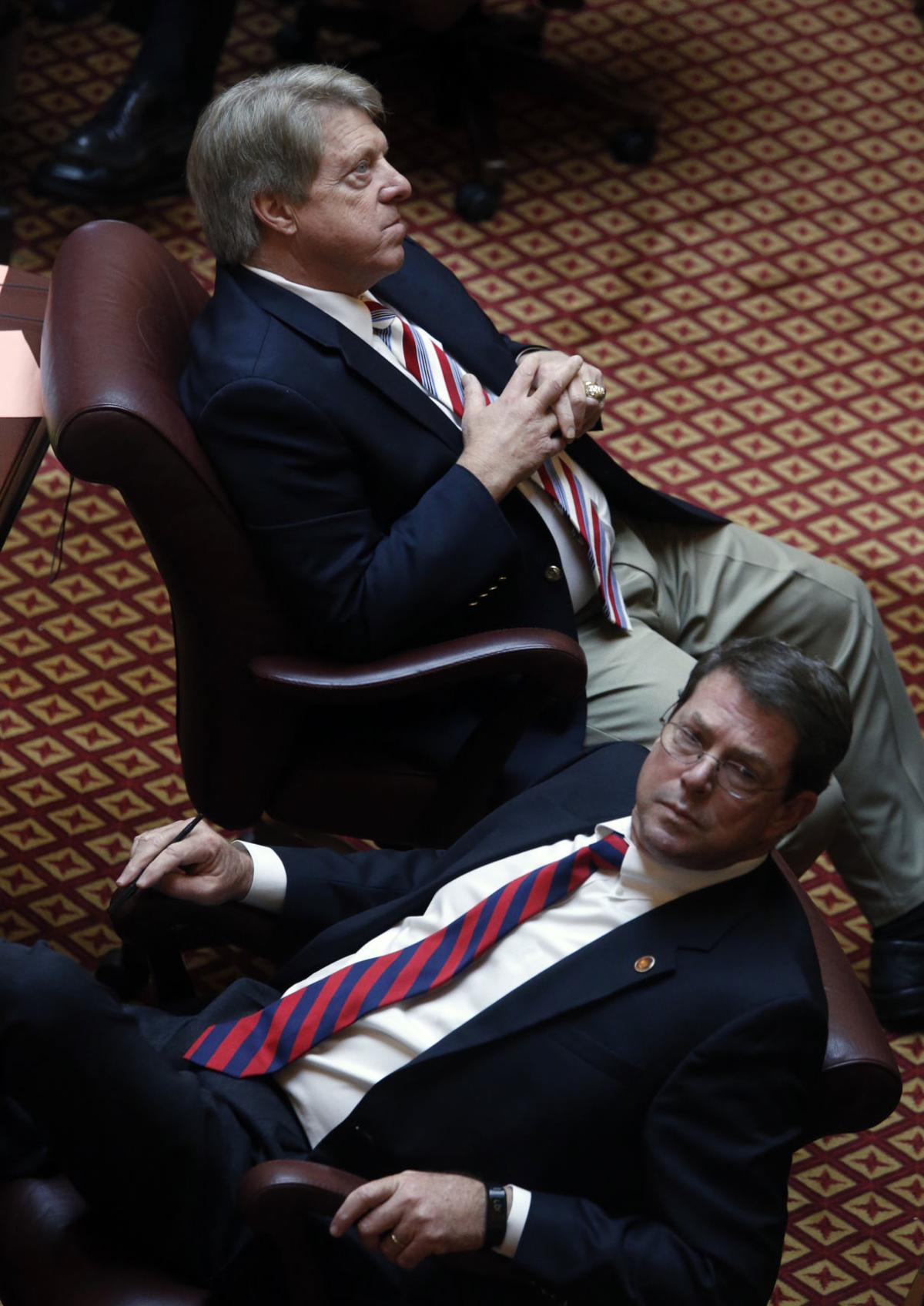 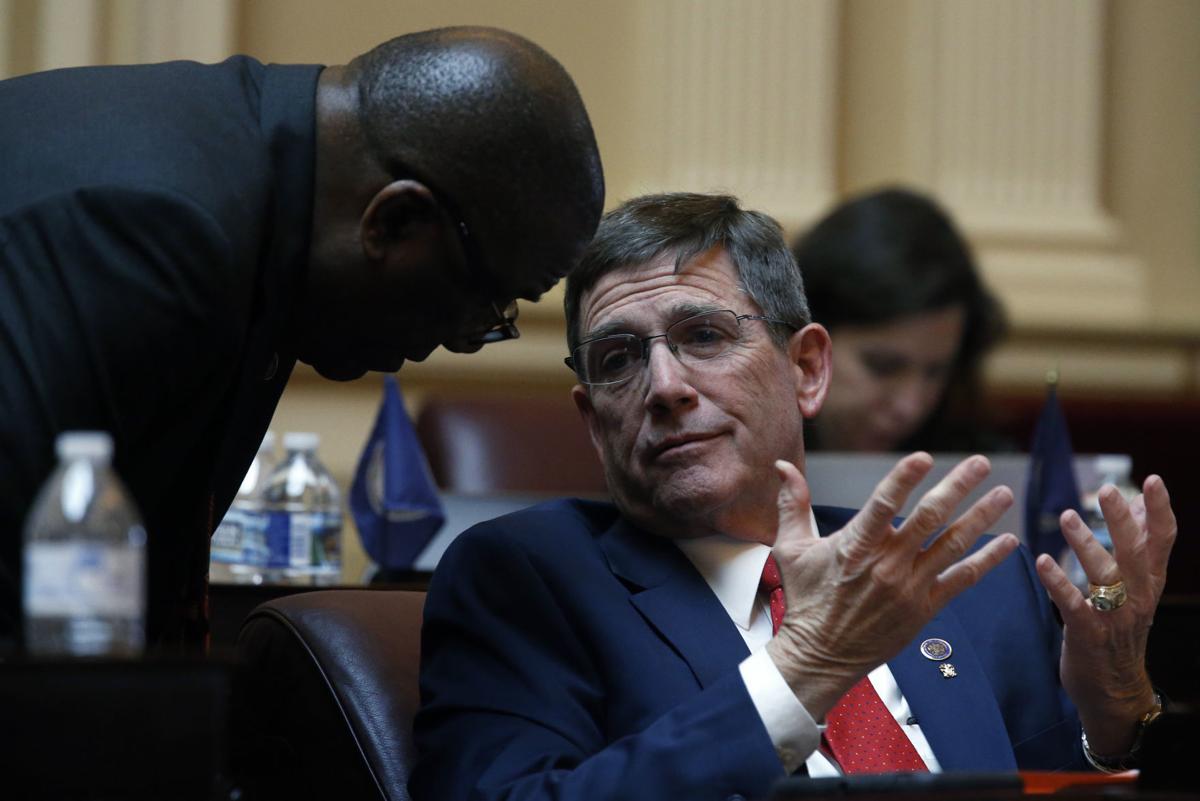 Despite floor speeches from lawmakers from both parties calling it a mistake, the state Senate voted 26-13 on Friday to pass the utility regulatory reform package endorsed by Gov. Ralph Northam and spearheaded by Dominion Energy, Virginia’s biggest utility.

“Let’s be honest,” said Sen. Chap Petersen, D-Fairfax City. “This bill is being written to benefit ... an industry giant.”

The far-reaching legislation shifts Virginia to what Dominion calls a “reinvestment model” that lets the company keep millions in earnings that would otherwise be returned to customers in exchange for investments in grid upgrades and renewable energy, among other spending, over the next decade.

Supporters bill it as a way to transform the state’s electrical grid to match a shift in the utility industry that better incorporates solar, wind and battery storage and hardens the system against storms and cyberattacks. The legislation has a host of bells and whistles, including a push for expensive programs to put distribution and transmission lines underground, $200 million in credits for Dominion customers for past overpayments, and about $1 billion in energy efficiency investments.

“It’s a comprehensive look toward the future,” said Sen. Frank Wagner, R-Virginia Beach, who shepherded the Senate version along with Sen. Dick Saslaw, D-Fairfax. Both have been major recipients of Dominion campaign contributions and have carried a range of utility-friendly bills in past years.

But critics see it as scheme that will make it more difficult to lower base rates and issue refunds to customers, functions they argue are the proper province of the utility regulators at the State Corporation Commission.

The commission and the attorney general’s consumer counsel office also say the bill will effectively bill customers twice for the grid investments, since they will cancel out refunds and get packed into the rate base, the value of capital investments from which utility is allowed to recover costs plus a profit margin.

Dominion says the bill will allow hundreds of millions a year in spending to upgrade the grid and increase the amount of power generated from renewable sources while keeping rates stable.

Saslaw argued that the legislation, which requires the commission to sign off on Dominion’s spending in advance and creates a new system of earnings reviews every three years, restores oversight.

“What’s not to like about this bill? We haven’t cut the SCC out of the picture,” Saslaw said.

Petersen, who has pushed to repeal the rate freeze bill and fought Dominion’s latest attempt to overhaul how it is regulated, was joined in floor speeches against Wagner’s bill by Sens. David Suetterlein, R-Roanoke, and Amanda Chase, R-Chesterfield. Seven Republican senators and six Democrats voted against the bill.

The opponents took some solace in the fact that more than double the number of senators opposed the Dominion-backed regulatory overhaul this time as compared with three years ago, when the General Assembly passed the 2015 law that froze base rates and prohibited the State Corporation Commission from issuing customer refunds.

That law, which was carried by Wagner, allowed Dominion — and to lesser extent Appalachian Power, Virginia’s other large utility — to pocket hundreds of millions in earnings above its authorized rate of return.

“We screwed up in 2015,” said Chase, who began serving in the Senate in 2016. “If we’re completely honest, people shouldn’t trust us. ... We get campaign contributions from Dominion.”

Wagner and Sen. Bill Stanley, R-Franklin — who ultimately voted against the bill — took exception to Chase’s characterization of the 2015 rate freeze, which was passed in fear of looming federal carbon regulation that never came to pass.

“I do resent the remarks I heard from the senator from Chesterfield,” Wagner said.

The company’s influence at the General Assembly has drawn increasing fire from politicians of both parties, but particularly progressive Democrats, who circulated a pledge last year for candidates to swear off Dominion donations. Thirteen Democrats who won seats in the House last year signed the pledge.

“I had no intention to speak today but I just felt like I needed to represent the truth, which is what people in my district feel,” Chase said, calling Dominion’s influence and the perception voters hold of it the “elephant in the room.”

Chase said her constituents have urged her to repeal the rate freeze, and though Wagner’s bill holds “a lot of good things,” decisions on rates and refunds are better left to an unfettered commission.

Constituents, she added, “feel like we’re beholden to Dominion because we do take campaign contributions from them. That’s true.”

“There’s a lot in the bill that I liked,” she said. “But, at the end of the day, it was unclear to me whether this was better or worse than status quo. ... I’d like to see a little more clarity on whether there’s double dipping on some of the projects or not.”

In an interview, Suetterlein said Northam’s early endorsement of the bill — after convening a working group of environmental organizations, business interests and consumer advocates — gave up leverage that could have been used to get a better deal for ratepayers.

The commission has estimated that Dominion might have overearned by $426 million in 2016 alone. Under the model of regulation that existed prior to 2015, Dominion would have had to return a portion of that money — between $133 million and $176 million for 2015 and 2016 — to ratepayers.

“The folks that call this a deal mean that the groups that will financially benefit from this all came out in agreement and said this was the right policy. The vast majority of Virginians do not benefit from this,” Suetterlein said. “A few groups that said that they were committed to getting the ratepayers their money back showed they were more interested in other things.”

Brian Coy, a spokesman for Northam, said the bill “will result in more money in Virginians’ pockets, greater regulatory oversight of our utilities and historic investments in clean energy and a modern power grid.”

A House version will head to the floor next week.

“The House Democrats, who talked a lot about putting the interests of customers over the interest of the monopoly utilities, will have a real opportunity do that,” Suetterlein said.

Sen. Frank W. Wagner, R-VA Beach, listens to debate on SB966, his bill dealing with utility rate regulation during the floor session of the Virginia Senate at the State Capitol in Richmond, VA Friday, Feb. 9, 2018. 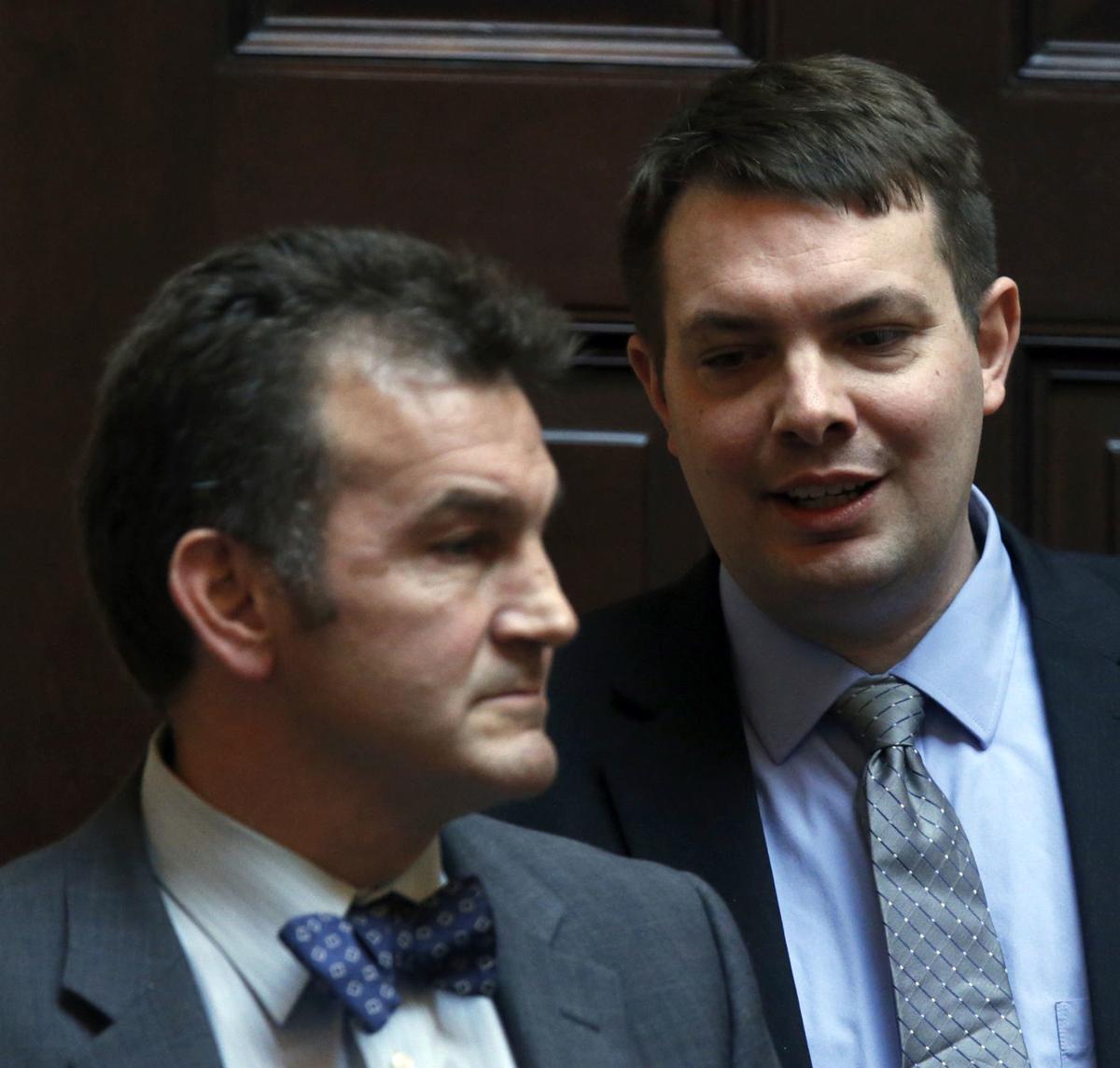 Sen. Chap Petersen, D-Fairfax, during debate on SB966, Sen. Frank W. Wagner, R-VA Beach’s bill dealing with utility rate regulation during the floor session of the Virginia Senate at the State Capitol in Richmond, VA Friday, Feb. 9, 2018. Despite their opposition, the bill passed.