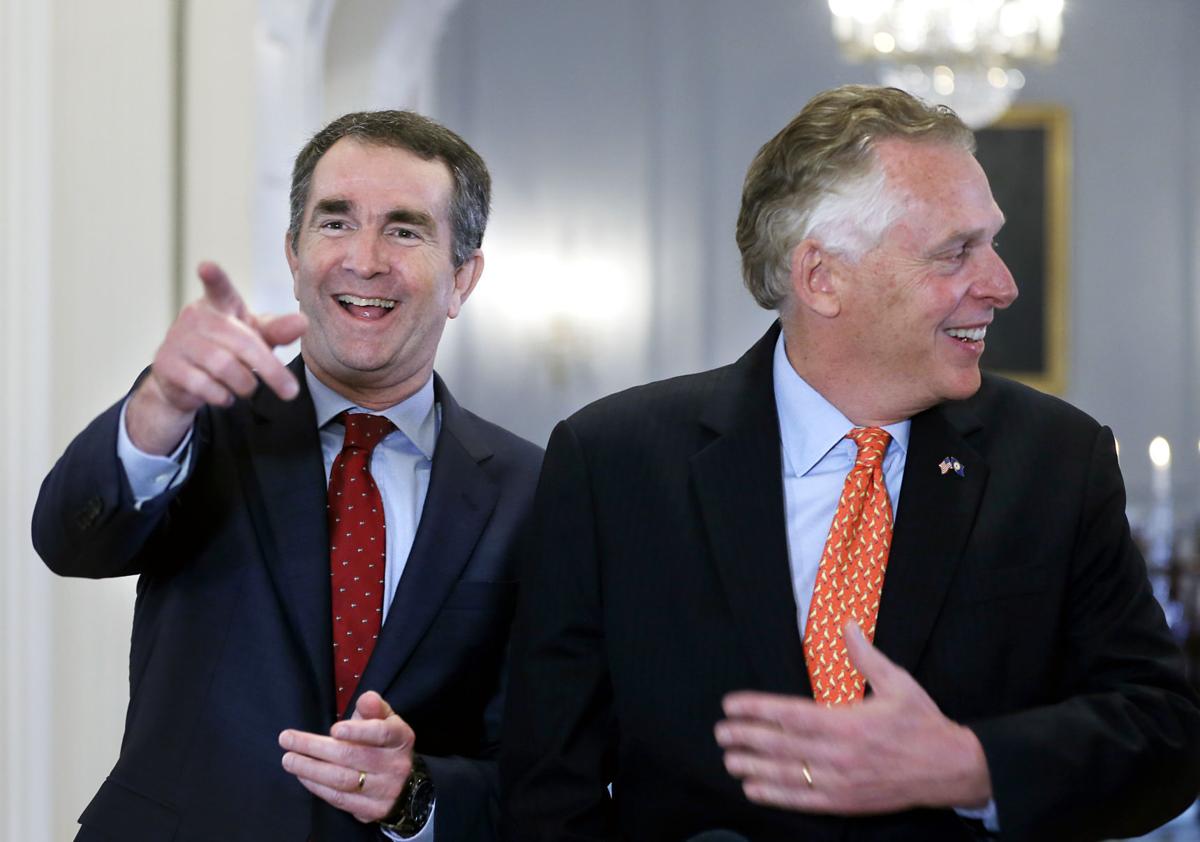 Gov.-elect Ralph Northam (left) and Gov. Terry McAuliffe spoke together at the Executive Mansion on Wednesday. 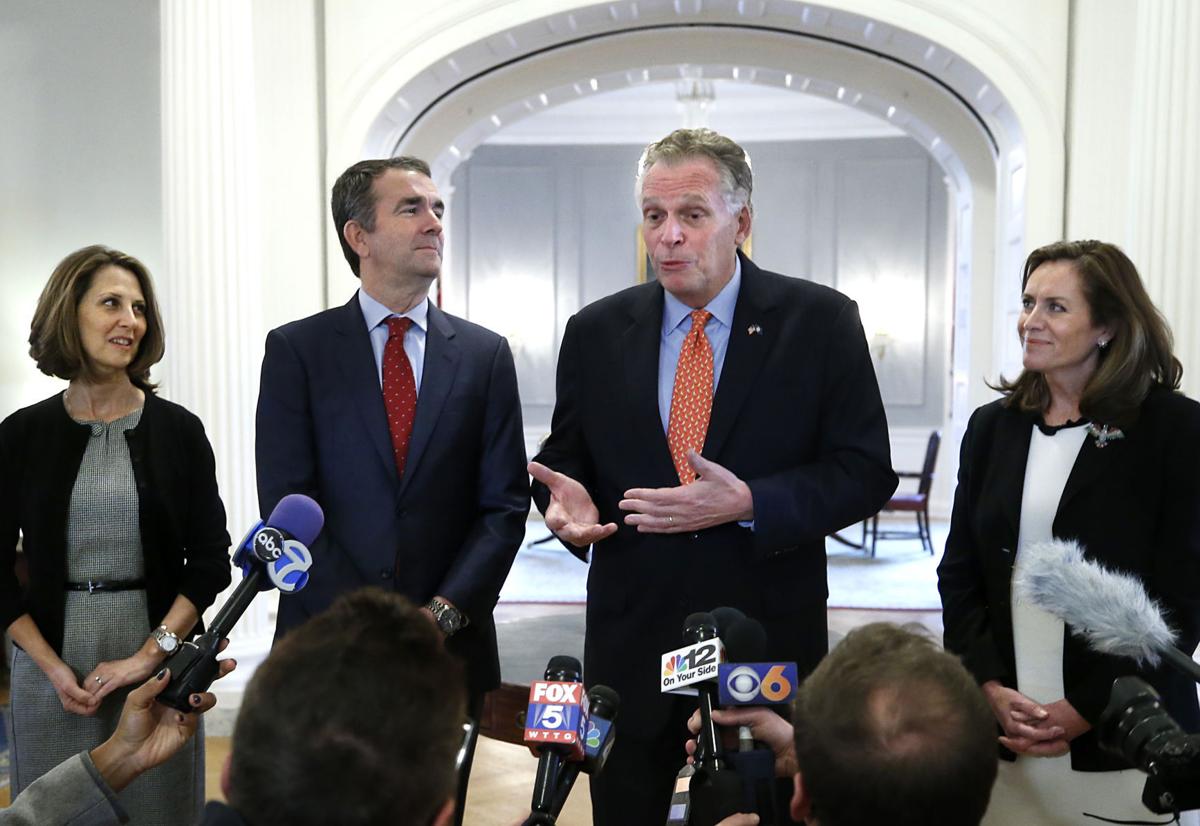 Pam Northam (left) and Dorothy McAuliffe (right) joined their husbands, Gov.-elect Ralph Northam and Gov. Terry McAuliffe, to talk with the media. Northam was elected Tuesday in a sweep of statewide races for the Democrats.

With the furor of the campaign season behind him, Democratic Gov.-elect Ralph Northam returned to his more laid-back self Wednesday morning as he called for unity, announced his transition team and outlined his priorities for his upcoming four-year term.

After outperforming expectations by beating Republican Ed Gillespie by almost 9 percentage points in a race dominated by harsh attack ads, Northam repeatedly invoked the fabled “Virginia Way” as he called for a bipartisan reset.

“We live in the greatest state in this country. And we have so much potential,” Northam said at a news conference in Richmond. “And it’s time to put some of the ideology, put some of the divisiveness aside and bring people to the table.”

As some Democrats continued to blast Gillespie for ads they said were racially tinged, Northam seemed ready to move on.

“He’s a good man,” Northam said of Gillespie. “And he ran to make Virginia a better commonwealth. And so I appreciate that. Ed is willing to heal Virginia with me, to bring people together.”

After Democrats rode a wave of animosity toward President Donald Trump to a sweep in statewide races and major gains in the House of Delegates, Northam said he’ll stand up to Trump in some areas, and work with him in others.

“If he plans to build up the military, that obviously would be very good for Virginia,” Northam said.

Northam said that when he takes office in January, he will focus on economic improvement in rural areas, promoting diversity, fighting the opioid crisis and expanding access to health care.

With Democrats on pace to flip more than a dozen seats in the House, the prospect of passing some form of Medicaid expansion suddenly seems within reach for Northam’s term after McAuliffe was unable to get it through the GOP-dominated House.

“I don’t mind calling it something different if we need to,” Northam said. “I don’t mind working with people from both sides of the aisle. But when we have 400,000 working Virginians that don’t have access to coverage, I find that unacceptable.”

Northam also announced that longtime aide Clark Mercer will serve as his chief of staff, putting to rest any speculation about who will coordinate the inner workings of his administration. Mercer has served in the same capacity during Northam’s current term as lieutenant governor.

“Everybody knows Clark. We’re trying to promote Clark. He lives in the shadow of the secretary of the commonwealth,” Northam said, referring to Mercer’s wife, Kelly Thomasson, a current member of Gov. Terry McAuliffe’s Cabinet.

The transition team that will help Northam form a Cabinet before his inauguration in January will be led by Marianne Radcliff, a veteran of multiple administrations who now works as a lobbyist for Kemper Consulting; Doris Crouse-Mays, a longtime labor organizer and president of the Virginia AFL-CIO; Joni Ivey, the recently retired chief of staff to U.S. Rep. Robert C. “Bobby” Scott, D-3rd; and Todd Stottlemyer, CEO of the Inova Center for Personalized Health in Falls Church.

After Northam’s morning news conference, the governor-elect was scheduled to head over to the Executive Mansion to meet with McAuliffe and scope out his future home.

Asked if he was surprised by the size of his win Tuesday night, Northam answered with a smile.

“This is my sixth campaign that I’ve run. I usually come in around 10 points,” Northam said. “So I was a little bit shy of that last night. But it was pretty much par for the course.”

How the Richmond area voted on Tuesday

Here's how the Richmond area voted for Governor, Lieutenant Governor and Attorney General on Tuesday.

Gov.-elect Ralph Northam (left) and Gov. Terry McAuliffe spoke together at the Executive Mansion on Wednesday.

Pam Northam (left) and Dorothy McAuliffe (right) joined their husbands, Gov.-elect Ralph Northam and Gov. Terry McAuliffe, to talk with the media. Northam was elected Tuesday in a sweep of statewide races for the Democrats. 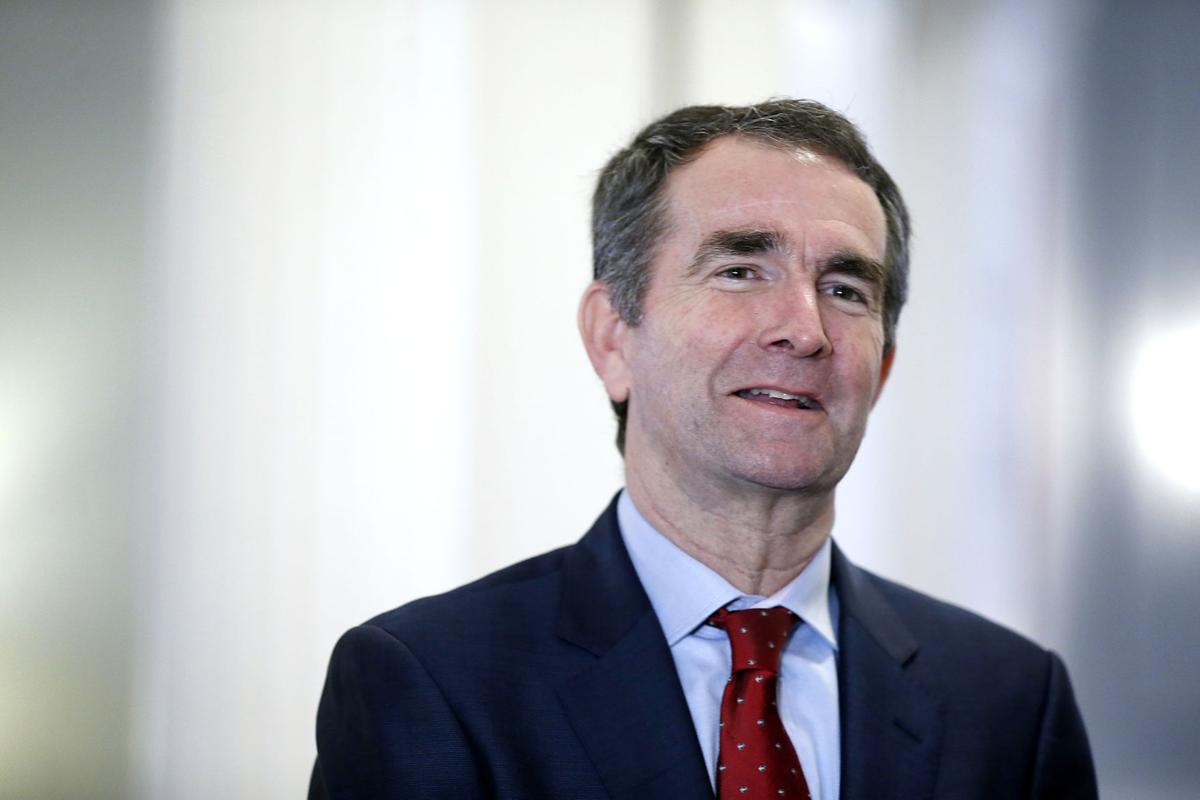 Gov.-elect Ralph Northam presided over the state Senate as lieutenant governor and previously served as a senator.