House of Delegates adopts its version of the budget, backing Medicaid expansion
0 comments
Share this
{{featured_button_text}}
1 of 2 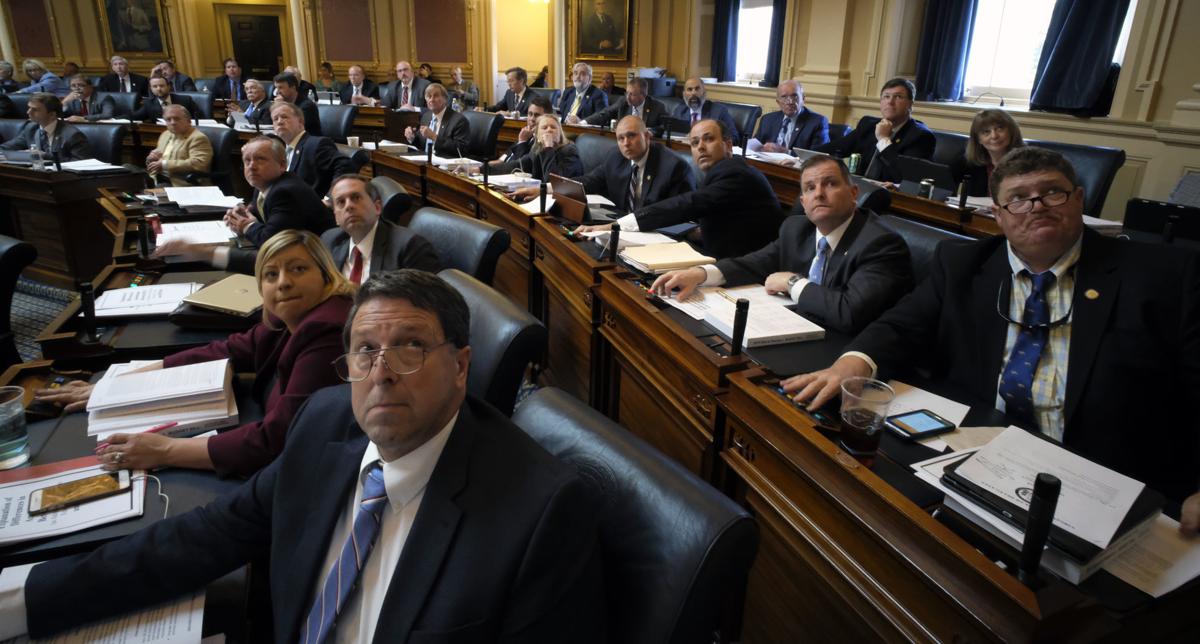 House Republicans watched the tally board during voting on one of many amendments to the proposed state budget during Tuesday’s floor session. 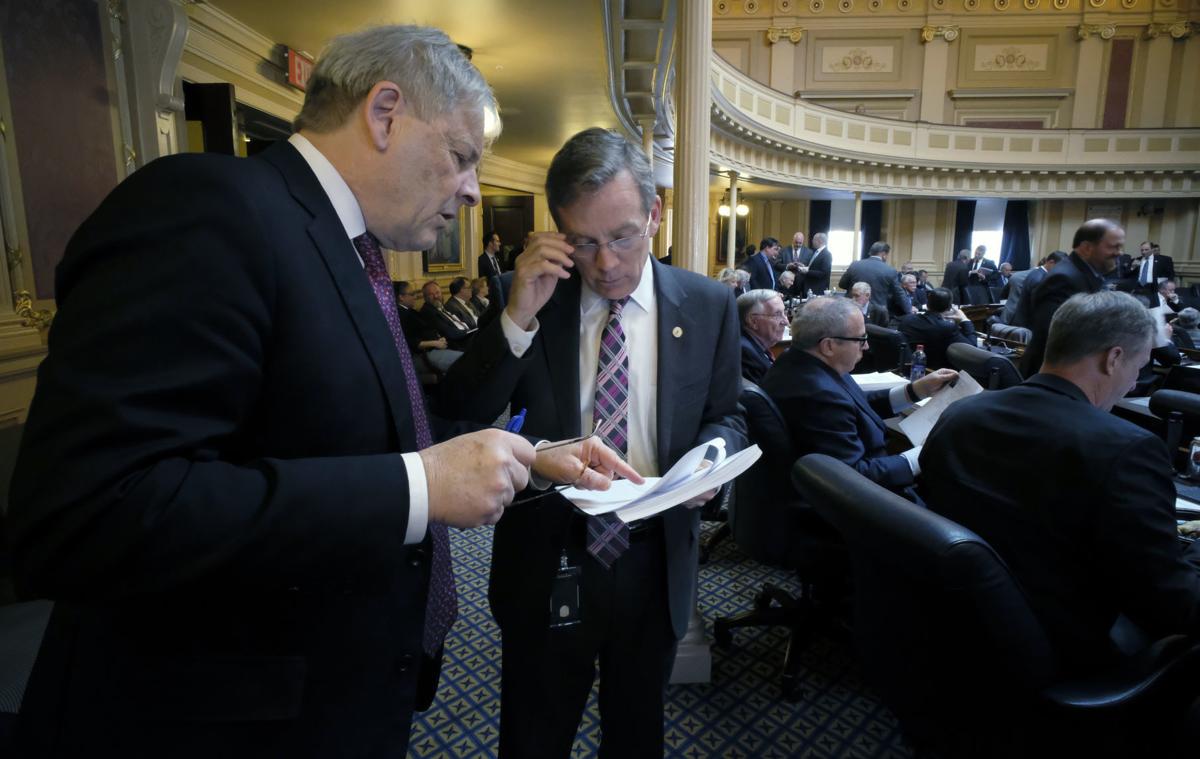 House Minority Leader David J. Toscano, D-Charlottesville, left, and Del. S. Chris Jones, R-Suffolk, chairman of the House Appropriations Committee, discuss amendments to the state budget Tuesday during the floor session of the House of Delegates at the state Capitol.

The drama over Medicaid expansion is gone in the Virginia House of Delegates, but plenty of action awaits in the Senate.

The House adopted a new version of its old budget — with a few notable exceptions — on Tuesday with little debate and few changes in the final votes in a special session that convened April 11 to settle a stalemate over expanding Virginia’s Medicaid program.

One Democrat, Del. Sam Rasoul, D-Roanoke, voted against both budget bills — one for the fiscal year that ends June 30 and the other for July 1, 2018, to June 30, 2020. Rasoul objected to a new provision that would tighten the proposed work requirement for Medicaid recipients so they would lose medical benefits if they fail to comply for three months in a calendar year with the proposed rules for seeking work, training or other public service.

They would be able to reapply at the next open enrollment for the program under the proposal, made by House Republican leaders to mirror a work requirement approved by the federal government for Arkansas’ Medicaid program.

“The updated language I believe has gone too far,” said Rasoul, who was joined by Del. Lee Carter, D-Manassas, in voting against an amendment in the budget bill for the current fiscal year.

In the end, the House approved the budget for the fiscal year that ends on June 30 on a 67-32 vote and the budget for the biennium that begins July 1 by 67-33. While Rasoul was the only Democrat to vote against either bill, Del. Bobby Orrock, R-Caroline, voted for the current budget bill, even though it would begin the process of expanding Medicaid, while opposing the biennial budget for accepting federal funds to expand eligibility on Jan. 1.

Del. Steve Heretick, D-Portsmouth, did not vote on the budget for the current year, but voted for the biennial budget.

The budget votes were necessary to restart the debate that ended on March 10 when the General Assembly adjourned without an agreement on state revenues and spending for 2018-2020 because of an impasse over Medicaid expansion between the House and Senate.

The Senate Finance Committee will meet Wednesday after lawmakers hold the annual veto session, which this year will feature action only on vetoes or amendments by Gov. Ralph Northam of legislation adopted during the 60-day regular session.

The committee is not expected to consider the proposed House budgets until next week, but instead will hear a presentation from Finance Secretary Aubrey Layne on the state revenue picture, as well as the effects of federal tax reform and discussion with national bond rating agencies about Virginia’s financial reserves.

The Senate Finance staff also will review the differences between the House and Senate budget proposals during the regular session, while noting any changes the House made in the spending plans adopted Tuesday for the special session.

Aside from the work requirement, the main change made by the House was to seek a federal waiver. It would allow Virginia to develop ways to stabilize the crippled individual market for commercial insurance and reduce premiums for middle-income families that don’t receive subsidies under the Affordable Care Act. The initiative would rely on federal money from reducing the subsidies the federal government pays for low-income participants in the insurance marketplace the government operates in Virginia.

A stronger work requirement and an attempt to lower commercial insurance premiums in the marketplace were among the goals set out by Sen. Emmett Hanger, R-Augusta. He has vowed not to support a budget without Medicaid expansion, while insisting on changes in the House proposal to make it acceptable.

Hanger, who is co-chairman of Senate Finance, was not impressed by the House’s first attempt to improve the bill.

“They haven’t done anything substantive at all,” he said Tuesday.

The House also tweaked its budget to ensure that all excess tax revenues collected in this fiscal year go into a new cash reserve, except for portions required to be deposited into the state’s constitutionally established rainy day fund and a water quality improvement fund. Previously, the House proposed to devote a portion of those excess revenues to one-time bonuses for state employees.

The new House budgets still include a proposed tax on hospital revenues that Hanger opposes. It would raise about $307 million in the biennium to pay the state’s share of the costs of Medicaid expansion, which would be capped at 10 percent under the Affordable Care Act.

As a result, the House plan assumes $371 million in state savings from using the enhanced federal funding to cover a range of existing health care services. The House budget would spend the savings on other priorities such as education, economic development and raises for state employees and teachers.

Del. Ben Cline, R-Rockbridge, House chairman of the Virginia Conservative Caucus and a Republican candidate for Congress in the 6th District, led the fruitless effort to block Medicaid expansion and any measure that would aid it, such as the work requirement or provider tax.

Cline warned that the proposed tax would hurt the state’s economy and hospitals. House Appropriations Chairman Chris Jones, R-Suffolk, said it would have the opposite effect by ensuring that the state’s share of expansion would be covered without using general fund dollars necessary for core services.

“It’s the next step in the process,” Jones said after the floor session.

House Republicans watched the tally board during voting on one of many amendments to the proposed state budget during Tuesday’s floor session.

House Minority Leader David J. Toscano, D-Charlottesville, left, and Del. S. Chris Jones, R-Suffolk, chairman of the House Appropriations Committee, discuss amendments to the state budget Tuesday during the floor session of the House of Delegates at the state Capitol.