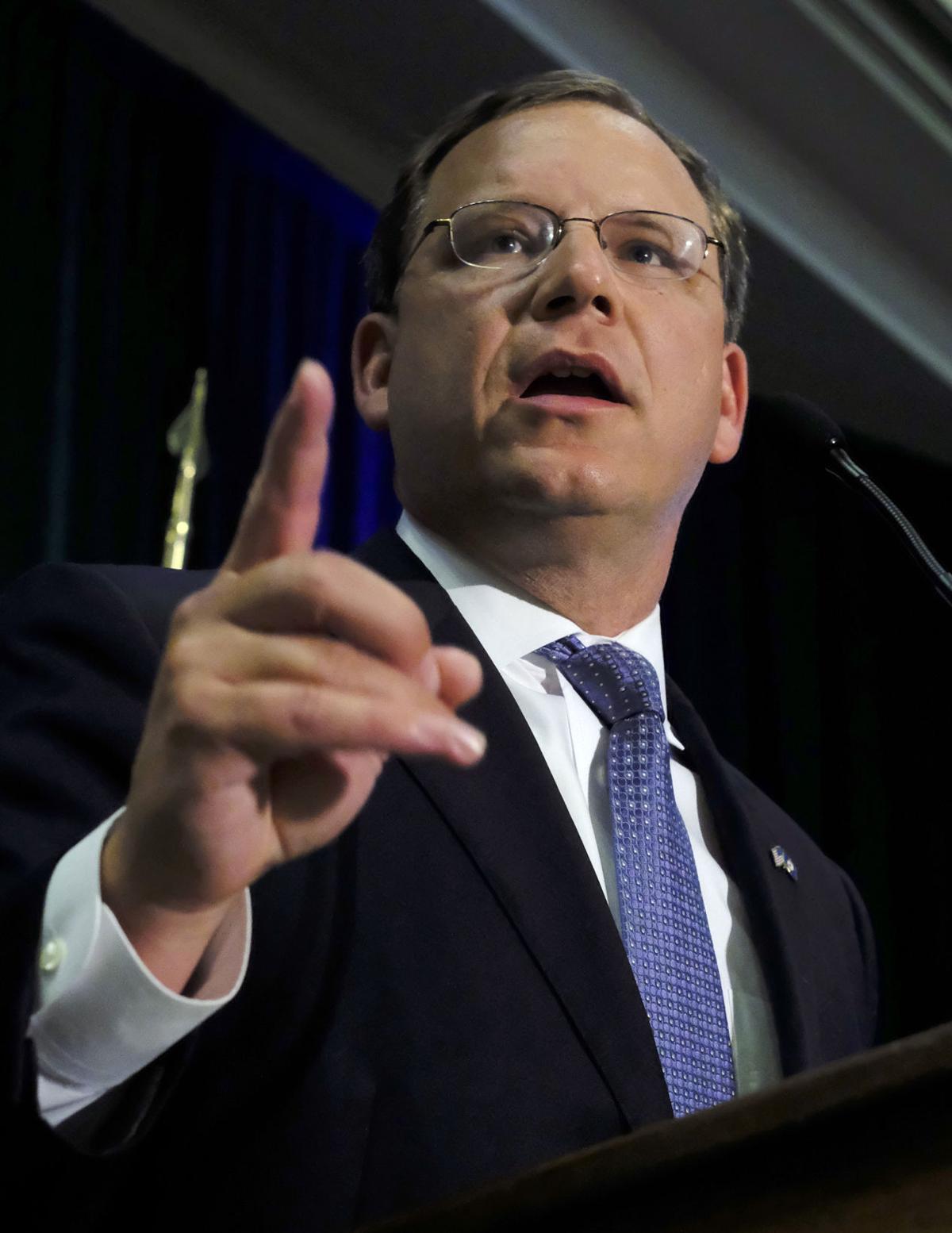 John Adams, the Republican nominee for Virginia attorney general, attended a campaign event Saturday in Chesterfield County. With him (below) were Ed Gillespie, the GOP nominee for governor, and Jill Holtzman Vogel, the party’s nominee for lieutenant governor. 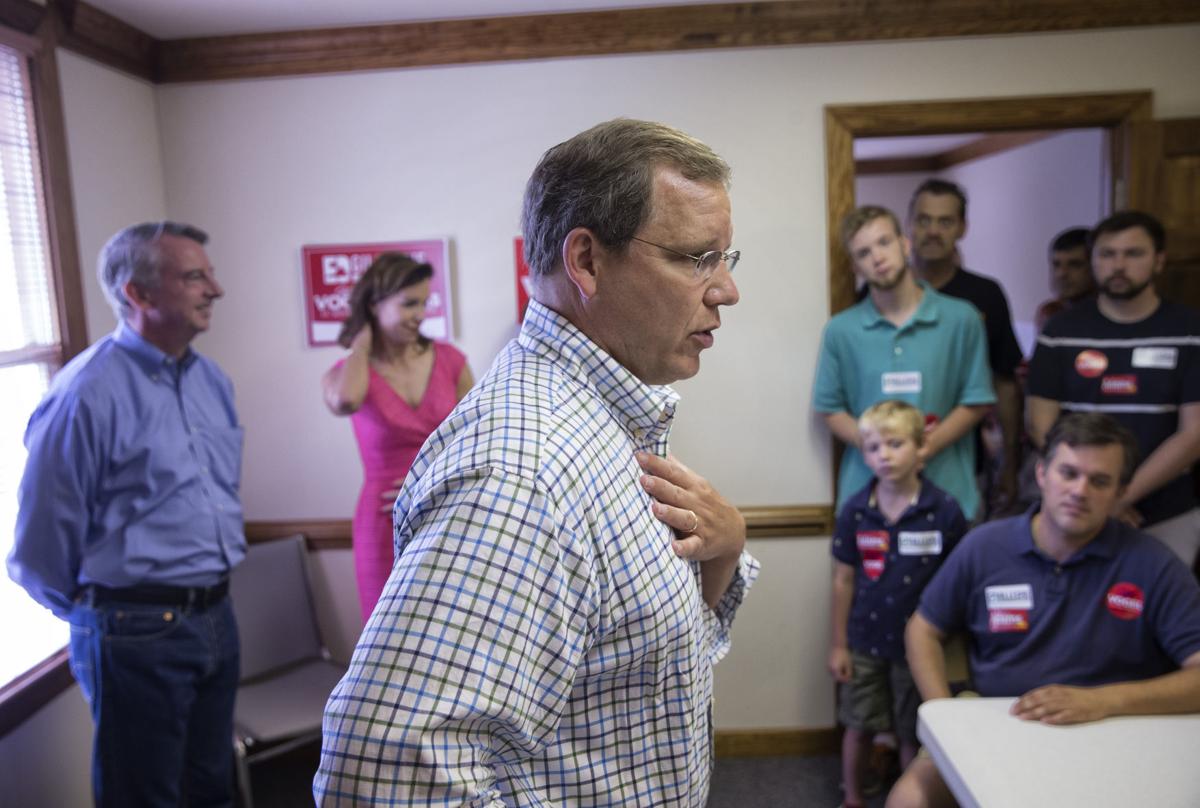 Voters in November will see a familiar name on their ballots.

This John Adams, a 43-year-old father of four from Chesterfield County and a lawyer at one of the state’s most powerful firms, is a descendant of the same Massachusetts family as the nation’s second president. His views on social issues like gay marriage and the role of the attorney general are the opposite of Herring’s. The two sparred in a recent debate and will continue through November as Herring seeks to hold his seat in a state that has been trending Democratic in statewide contests.

Adams is making his first run for public office and is already feeling the sting of Virginia politics. Some of his words in the debate were so twisted by Herring’s campaign, he said, that his words became the exact opposite of his position.

“The fact that so early his team and his supporters are pushing a narrative that is just objectively false tells me that I’m doing a good job,” Adams said. “Tells me that they’re scared.”

So who is John Adams, and why does he want to be the state’s top lawyer?

Adams was born in Richmond’s Chippenham Hospital. His father was a business manager and lobbyist for a telephone company, and his mother was the daughter of a Kentucky coal miner.

Adams’ paternal grandfather, the Rev. Theodore F. Adams, relocated his family to the Richmond area from Toledo, Ohio, in the 1930s to become the pastor at First Baptist Church. The minister became so well-loved that he was featured on the cover of Time magazine.

Adams, the youngest of four boys, grew up in Midlothian and graduated from Midlothian High School. Virginia Military Institute was the only college he applied to. While there, he became executive officer of the VMI Corps of Cadets.

He lived in Pearl Harbor and Virginia Beach while serving five years in the Navy, then went to law school at the University of Virginia. He clerked for Judge David B. Sentelle of the U.S. Court of Appeals for the District of Columbia Circuit, who recommended he clerk for a U.S. Supreme Court justice.

Adams clerked in 2006 and 2007 for Justice Clarence Thomas, whose son had attended VMI with Adams. From there, he worked as an associate counsel in the White House of President George W. Bush in 2007 and 2008 before moving back to Richmond near the end of the Bush administration to become an assistant U.S. attorney.

Adams said he does not come from an overtly political family but was naturally a Republican. He knows of no one in his family who’s ever run for office before.

As a prosecutor, he handled the case of John W. Forbes, a former state finance secretary who was sentenced to 10 years in prison in 2010 for defrauding the state tobacco commission of $4 million.

In 2010, Adams left the U.S. Attorney’s Office to join the law firm McGuireWoods in Richmond, and his friend and neighbor Mike Gill, also an assistant U.S. attorney at the time, handled Forbes’ sentencing. The two worked on several cases together. Gill went on to become chief of staff for the Drug Enforcement Administration and is now a director at the law firm Hancock, Daniel, Johnson & Nagle.

“He is one of the most intelligent, hard-working guys that I’ve ever known,” Gill said of Adams. “He worked hours on end in that job on the cases, and he was very passionate about the cause, doing the right thing. And I really developed a deep respect for that. And also how he treated people. He’s got a great sense of what’s right.”

Gill added: “I was very excited when I found out that he wanted to run for attorney general because I think that he is one of the most solid, grounded individuals I’ve known.”

Adams is on unpaid leave from McGuireWoods, whose law firm and consulting wing are one of the most powerful political entities in the state, and a national presence.

Most of Adams’ work in white-collar criminal defense at McGuireWoods was in other states. His brother Tray Adams is senior vice president of state government relations with McGuireWoods Consulting. The law firm’s chairman is Richard Cullen, a former state attorney general and U.S. attorney for the Eastern District of Virginia whose current clients include Vice President Mike Pence.

“A lot of what I do is representing clients who are in sometimes difficult spots, so I tend not to talk about it,” he said. “One of the things about being a lawyer is respecting your clients’ privacy.”

Adams handled the defense of Simon Hounslow, who was the only one of five defendants a jury acquitted in 2013 in a vast federal fraud trial in Norfolk involving the Bank of the Commonwealth.

Adams is a friend of U.S. Sen. Mike Lee, R-Utah, who clerked for Supreme Court Justice Samuel A. Alito while Adams clerked for Thomas. Lee, as a senator, has suggested Adams run for office. “And I always said no,” Adams said.

Adams, who has supported Republican candidates, said, “I never actually thought I would be running for office.”

What changed, he said, is how Herring has handled the job. Adams announced his run in January 2016. At the time, state Del. Robert B. Bell, R-Albemarle, was already running for the Republican nomination.

“When I saw the way that Mark Herring had politicized the office, and then when he said that he was going to run for re-election, that’s when I decided that I could do something about it,” Adams said. “And the reason I got in — I had a lot of respect for Rob Bell, who I knew was running — but I thought because of what had happened in the Attorney General’s Office, a candidate who wasn’t a career politician would have the strongest argument for running against Mark.”

Bell ended his campaign in November 2016, citing his duties as a father to two young children, one with special needs. Virginia Beach attorney Chuck Smith did not qualify for the June primary ballot, leaving Adams unopposed for the Republican nomination.

Among people Adams asked for advice was Jerry Kilgore, a Republican who served as Virginia’s attorney general from 2002 to 2005. “I had never done anything like this,” Adams said.

When asked for examples of how Herring had politicized the office, Adams first cited the state’s law requiring voters to show a photo ID. Herring opposes the law on policy grounds, but defended it in court via outside counsel. Adams said that cost taxpayers extra, though, and Herring should have defended the law — which has withstood challenges — himself.

Adams also criticizes Herring for not defending the state’s ban on gay marriage, which Virginia voters approved in 2006. The U.S. Supreme Court later made gay marriage the law of the land. But Adams says he would have defended the ban and any law passed by voters or the legislature because it’s the attorney general’s job.

“We have an attorney general who’s not enforcing or defending the laws of Virginia,” he said.

Adams is opposed to gay marriage, while Herring, who opposed it as a state senator, has championed it as attorney general.

“I have a religious faith that tells me that marriage is a sacred institution between a man and a woman. That’s what I believe,” Adams said.

Among other critiques, Adams noted that Herring has filed briefs in court opposing “right to work” — the laws that say workers cannot be forced to pay union dues as a condition of employment. Virginia has such a law, making it a “right to work” state.

And he said Herring’s political activism in the areas of gun control and his opposition to President Donald Trump’s proposed travel bans from certain Muslim majority countries are further examples of politicization of the office. Adams backs Trump’s position.

The two candidates held their first debate June 17 in Virginia Beach. Herring painted Adams as a defender of embezzlers and money launderers, said Adams would ban abortion “in all cases” and had fought against women’s access to birth control.

The reference was to Adams’ work on behalf of Hobby Lobby.

The retailer won a 5-4 decision in 2014 at the U.S. Supreme Court, which ruled that requiring family-owned companies to pay for contraception for employees violated religious freedom. Adams said his position was that the government should not tell an employer to violate its own religious beliefs — and that he was not interested in limiting women’s access to birth control.

Fundraising emails by Herring, however, selectively pulled part of his comments from the debate, creating the impression Adams did not care about the issue at all.

“I don’t care about limiting it,” Adams said in an interview. “It was very clear to anybody who was in the room.

These social issues will be debated until November.

Herring campaign manager Adam Zuckerman said in an email: “John Adams cannot credibly say he doesn’t care about limiting women’s access to birth control when he volunteered to fight twice in federal court to do just that. The Supreme Court itself said ‘our decision in these cases is concerned solely with the contraceptive mandate’ and Justice Ruth Bader Ginsburg said the court’s decision ‘would deny legions of women who do not hold their employers’ beliefs access to contraceptive coverage.’”

Meanwhile, the GOP ticket is excited about Adams. He joined gubernatorial nominee Ed Gillespie — who worked in the Bush White House at the same time as Adams — and lieutenant governor nominee Jill Holtzman Vogel on Saturday morning at kickoff events for GOP field offices across the state.

At the field office in Chesterfield, state Sen. Amanda F. Chase, a Republican who represents the area, said she and Adams had the same government teacher.

“He’s so smart and so capable and the fact that he’s from Chesterfield is incredible,” Chase said.

State Del. Roxann L. Robinson, R-Chesterfield, told Adams, “We’re proud that you kind of came out of nowhere and said, ‘I’m going to do this.’”

“He’s taking on the giant,” she said.

John Adams, the Republican nominee for Virginia attorney general, attended a campaign event Saturday in Chesterfield County. With him (below) were Ed Gillespie, the GOP nominee for governor, and Jill Holtzman Vogel, the party’s nominee for lieutenant governor. 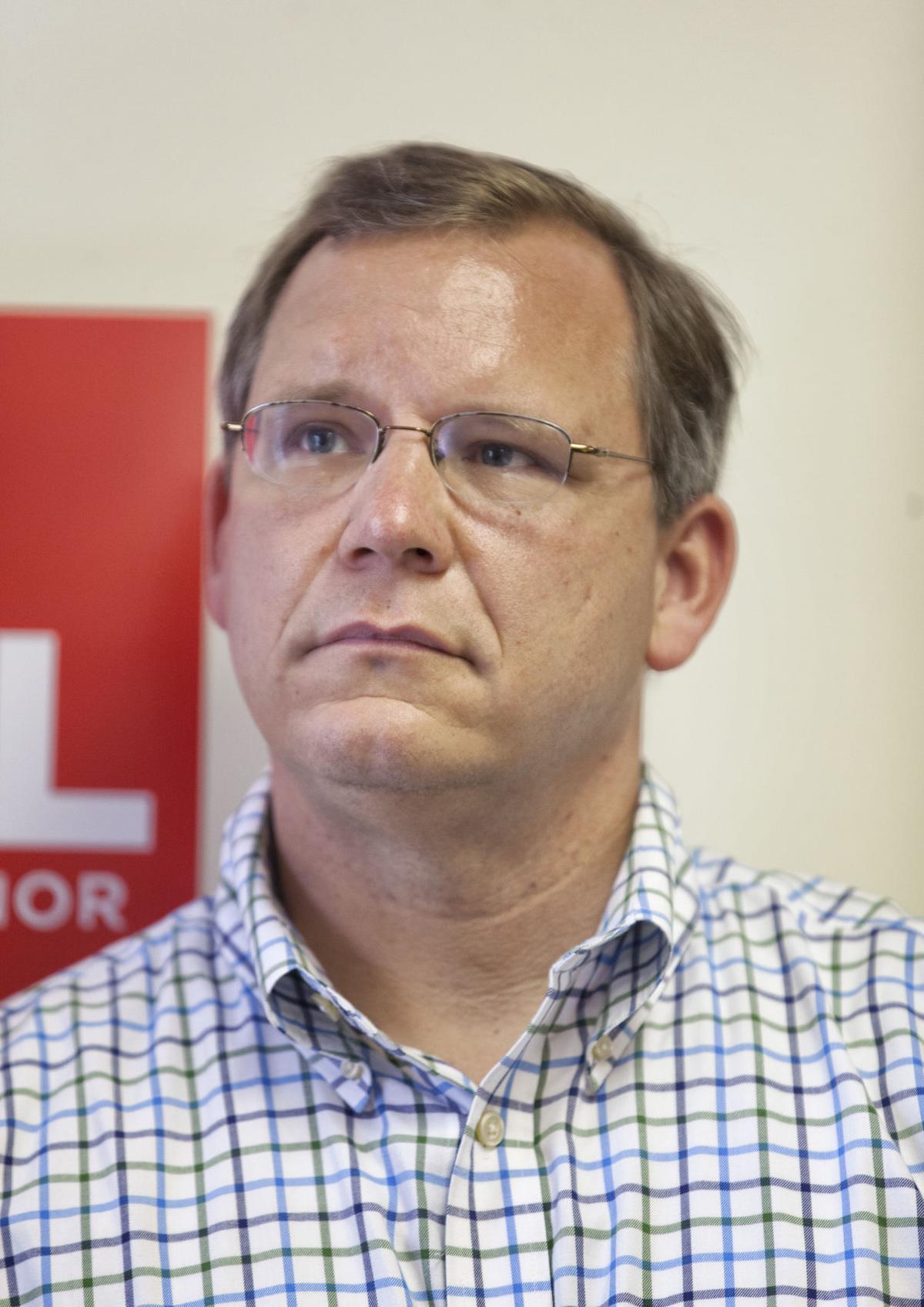