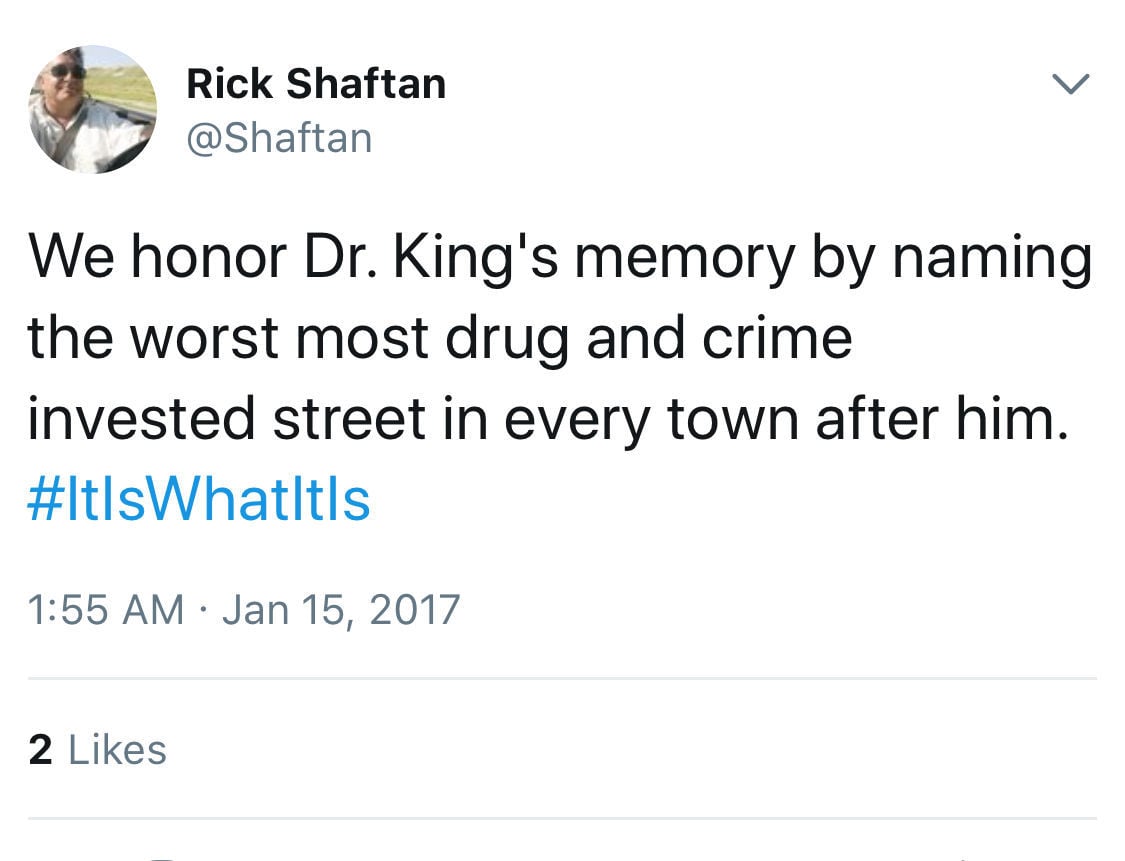 An image of a Tweet posted by GOP consultant Rick Shafton.

Republican Senate candidate Corey Stewart has paid more than $100,000 to a campaign consultant who has called the NAACP a “more violent” version of the KKK and said only a “fool” would start a business in a black neighborhood.

Stewart’s Senate campaign paid Rick Shaftan’s company Atlantic Media & Research more than $113,000 for consulting and work on media and radio advertising between May 8 and June 11, according to the Federal Election Commission. The expenditures include purchase of advertising. Consultants take a commission.

Stewart also paid Shaftan to work on his unsuccessful run in the GOP primary for governor last year. Payments for media buys and polling totaled more than $230,000, according to the Virginia Public Access Project. Shaftan’s firm is based in Rodanthe, N.C.

Shaftan has done work in Virginia for conservative politicians including Dick Black, now a state senator from Loudoun County, and Ken Cuccinelli, a former state senator and attorney general.

Republicans and Democrats both say the posts by Shaftan should be denounced.

Among his social media posts:

“If black ‘leaders’ want better race relations, which of course they don’t, they could start by telling football players to stand for the National Anthem, instead of sitting on the bench eating a banana,” he posted in August 2017 on Facebook.

“Black people didn’t have a problem with the #RebelXFlag or Confederate Statues until wealthy white people told them they did. #SlipperySlope,” he wrote on Twitter in September 2017.

John Whitbeck, the immediate past chairman of the Republican Party of Virginia, said Monday that he was disturbed by the posts.

Whitbeck left his post as chairman just weeks after GOP primary voters picked Stewart last month as the nominee against Democratic Sen. Tim Kaine, who is seeking a second term. The National Republican Senatorial Committee has declined to assist Stewart in the race.

Stewart declined to comment for this story. Shaftan declined to answer whether he stood by his posts, but he said by email that the post he made about players sitting on a bench eating a banana referred to a Washington Post story that said a player was “sitting on an orange cooler and nibbling on a banana.”

Among other things Shaftan has written on social media:

“We honor Dr. King’s memory by naming the worst most drug infested street in every town after him #ItIsWhatItIs,” he wrote on Twitter in January 2017.

“After #Ferguson, only a fool would start, finance or insure a business in a black neighborhood,” he wrote on Twitter in 2014.

In 2010, he wrote on Twitter that the NAACP was “the black KKK, only more violent and dangerous.”

Kaine spokesman Ian Sams called the posts by Shaftan “disgusting.” In their first Senate debate July 21, Kaine attacked Stewart over his past associations with Jason Kessler, who coordinated last August’s violent Unite the Right rally in Charlottesville, as well as Stewart’s support for Roy Moore, the failed U.S. Senate candidate in Alabama who was accused of inappropriate behavior or sexual assault by nine women.

Stewart said in June that he no longer wants anything to do with Kessler.

Earlier this year, Brian M.H. Landrum, a government aide to Stewart at the Prince William Board of County Supervisors, where Stewart is chairman, was included in a private Facebook message conversation in which Kessler and others discussed plans for a second rally in Charlottesville. Landrum left the Facebook message group on June 19. The Richmond Times-Dispatch obtained the Facebook messages through a records request made to Charlottesville’s attorneys. They run from May 6 to June 20 of this year and do not show Landrum taking part in planning or discussing the rally or expressing agreement with Kessler.

Susan Swecker, chairwoman of the Democratic Party of Virginia, has called on Stewart to fire Landrum from his tax-funded job at the board. He currently earns $20 an hour as a part-time employee in Stewart’s government office, the Prince William Times reported, and previously earned $30,962 working full time between January and June.

The campaign of Republican U.S. Senate candidate Corey Stewart attacked the media Thursday after refusing to answer reporters’ questions about…

An image of a Tweet posted by GOP consultant Rick Shafton. 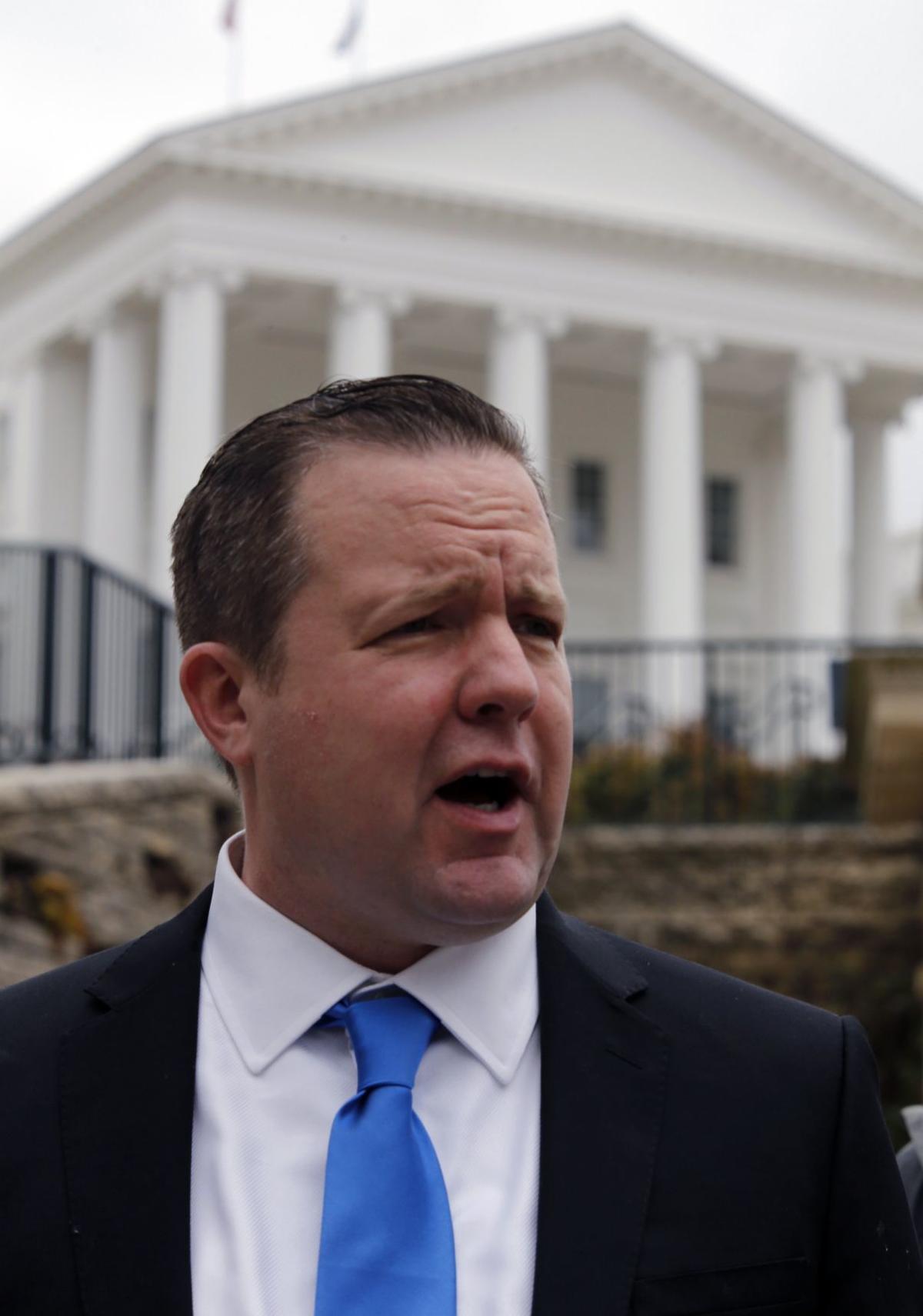