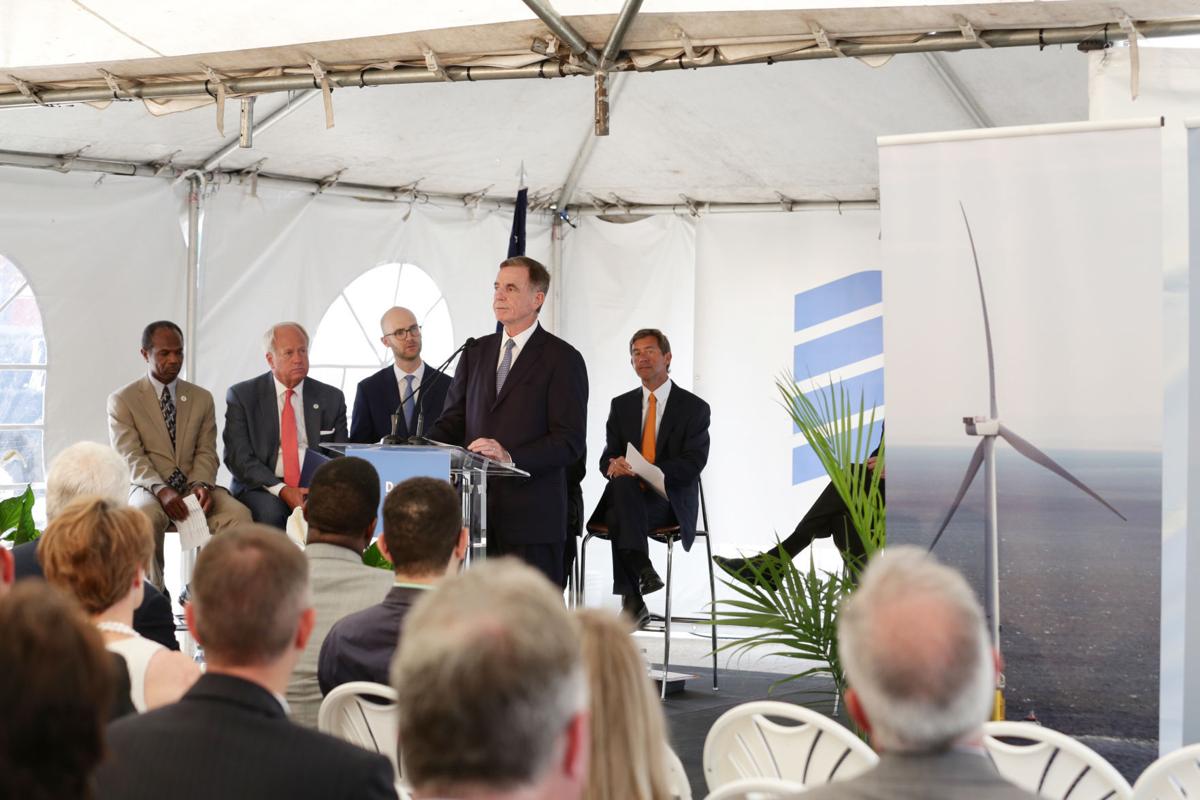 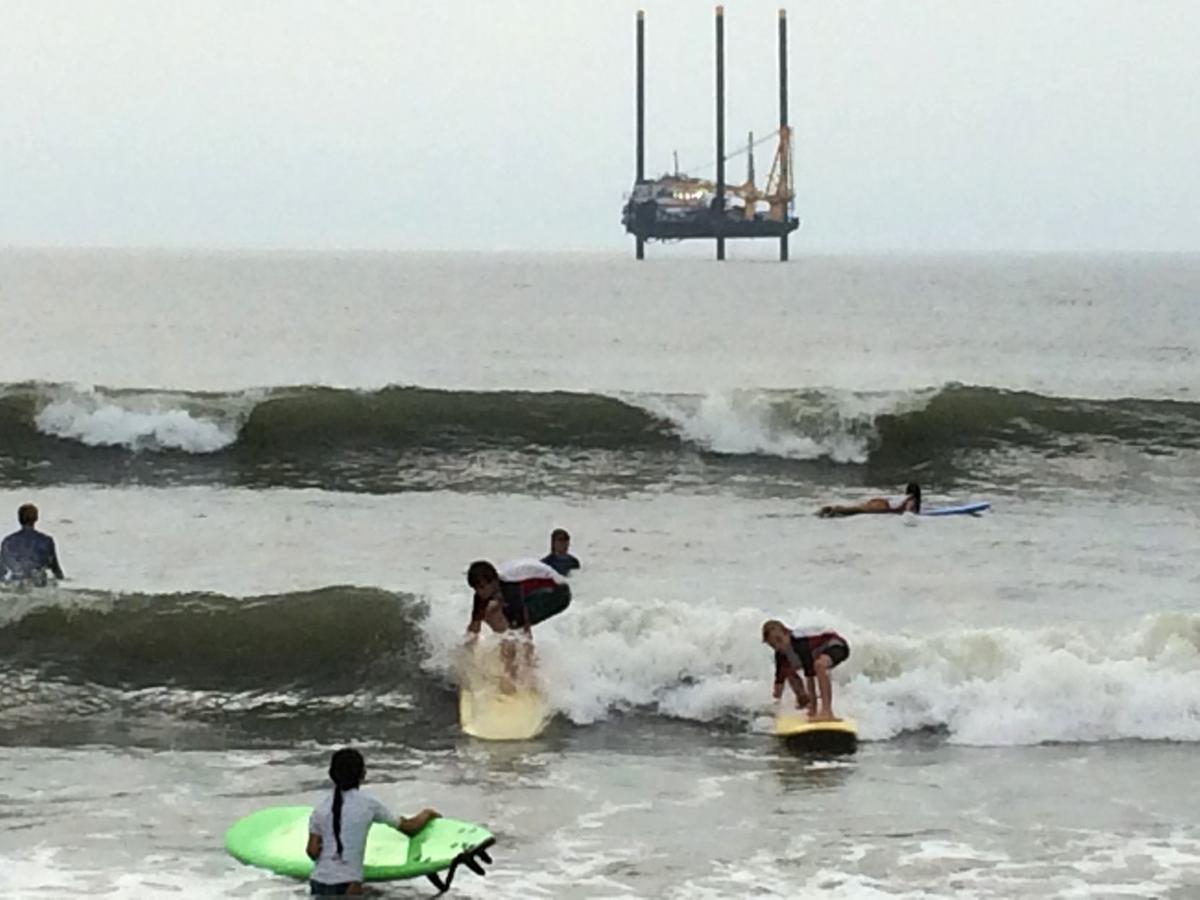 Dominion Virginia Power began making test borings in the Atlantic Ocean off Virginia Beach as part of its research aimed at harvesting offshore wind energy, as shown in this July 2014 photo. 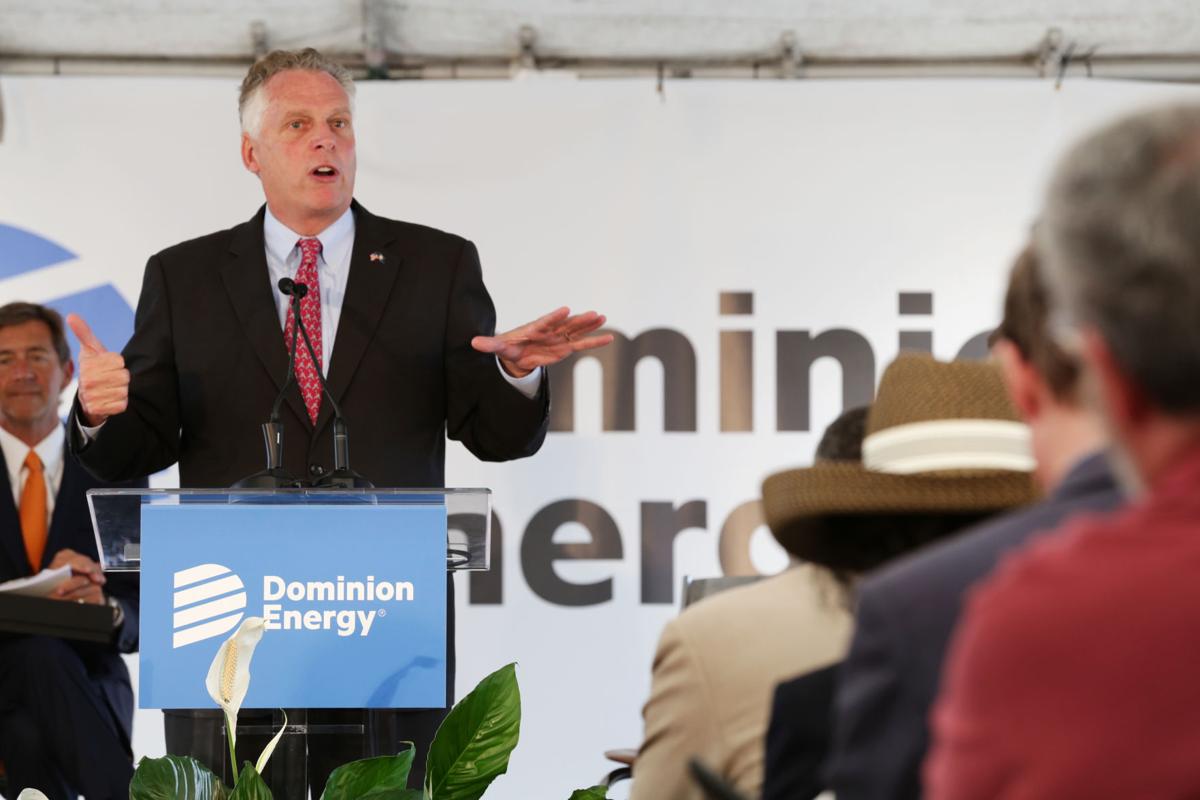 PORTSMOUTH — A little more than a year ago, Dominion Energy faced a torrent of criticism for letting lapse a $40 million federal grant for an offshore wind power pilot project. Critics contended it meant the utility was never serious about pursuing wind as a generation source.

Among those upset over the lost money: Gov. Terry McAuliffe.

“There was a lot of displeasure when we lost that federal grant. I worked very hard to get that $40 million federal grant, so I called the secretary of energy myself, but the decision had already been made. I was very unhappy about it,” said McAuliffe, a Democrat, in an interview. “But the good news is we’re past that. ... We’ve rekindled it.”

As a testament to how much difference a year can make, McAuliffe was among a string of local, state and federal elected officials at the Portsmouth Marine Terminal on Monday morning as the utility giant announced a partnership with a European energy firm that is expected to deliver a pair of 6-megawatt turbines about 27 miles off the coast of Virginia Beach by the end of 2020.

The turbines, which will rise about 600 feet above the sea surface, with a rotor diameter of about 500 feet, will be anchored in about 80 feet of water and connect to a transmission line that will run to Camp Pendleton in Virginia Beach.

The project, which Dominion says will be out of sight for beachgoers, would be just the second offshore wind development in the country. The first was the 30-megawatt Block Island Wind Farm off the coast of Rhode Island that became operational in 2016. But Dominion’s project, estimated to cost $300 million that the company will seek to recover from ratepayers, will be the first owned by an electric utility.

“We have been working on this for a long time, and it has been far from easy,” said Thomas F. Farrell II, Dominion’s CEO, president and chairman. “The technology is complex, the ocean is a very difficult place to work, and the economics are challenging in those conditions.”

McAuliffe, Farrell and other officials said the pilot could eventually lead to 2,000 megawatts of wind on a 112,800-acre site leased by Dominion from the federal Bureau of Ocean Energy Management.

For comparison, consider that Dominion’s Chesterfield Power Station, the largest fossil fuel-fired plant in Virginia, generates 1,640 megawatts. Mark Mitchell, Dominion’s vice president of generation construction, said the company expects to see the price of wind power components continue to fall, similar to the drop in price that is fueling a solar boom.

Crucial to the announcement Monday was linking up with Dong Energy, a Denmark-based energy group that has installed 22 wind projects around the world that generate 3.9 gigawatts, enough to power about 2 million U.S. homes.

Lauren Burm, a spokeswoman for Dong, which has a U.S. office in Boston, said the two companies entered into talks on the Virginia Beach project within the past six months.

“Our partners from Europe know how to harness offshore wind and convert it,” Farrell said. “We know how to deliver it to homes and businesses across Virginia. We’ve searched for years for a reliable partner with whom we could reach an agreement that would allow us to proceed and at the same time keep the project affordable and protect our customers. ... It took a lot of years and a lot of work to get here today. That’s how major energy projects happen.”

Dominion and Dong have signed a memorandum of understanding that gives Dong “exclusive rights to discuss a strategic partnership” with Dominion on additional development at the larger site if the test turbines prove successful, especially in weathering an Atlantic hurricane season.

Francis Slingsby, Dong’s head of strategic partnerships in North America, said the company sees “tremendous potential in the Mid-Atlantic” for wind power, an industry that could drive port traffic, jobs and innovation.

“We have the opportunity to build America’s future right here in Virginia, together,” he said.

Slingsby said the company sees similarities to the stormy North Sea, where Dong has installed turbines before.

“It’s going to be an interesting learning experience for us,” he said.

Virginia Beach Mayor Will Sessoms, who helped create a task force on alternative energy in 2009, said the project could establish the region as a “Silicon Valley” for clean energy. Numerous speakers singled out the Hampton Roads area as among the most vulnerable spots in the U.S. to sea-level rise driven by climate change.

“Virginia Beach is pumped up on this project,” said Sessoms, a Republican. “This is something I wanted for a very long time, but yet wasn’t really sure we could ever accomplish.”

In a statement, the Sierra Club’s Virginia chapter, which has accused Dominion of dragging its feet on offshore wind in the past, said it was “very encouraged to see Dominion take steps to actualize offshore wind.”

“Dong Energy is a proven leader in offshore wind development, having built more offshore wind farms than any other company worldwide,” the group said. “Hopefully, Dong will have little tolerance for any further delay tactics Dominion attempts to make in developing offshore wind.”

Farrell said replacing coal-fired plants with natural-gas generation has been key to Dominion cutting its carbon emissions by 43 percent over the past 15 years.

“That’s twice the national average and the third-highest reduction by any utility in the United States over that time,” he said, adding that Dominion also has 2,000 megawatts of solar generation in nine states.

Both gubernatorial candidates hailed the announcement.

“Governor McAuliffe and our administration have worked urgently to reduce our carbon footprint and invest in renewable energy to protect our commonwealth for generations to come,” said Lt. Gov. Ralph S. Northam, the Democratic nominee, calling the announcement “a promising step forward.”

“I look forward to seeing the project move forward, and I will continue to advocate for diversifying Virginia’s energy economy in the years to come,” he said.

Videos show fatal shooting during rampage at the Capitol

ALEXANDRIA, Va. (AP) — The leader of one of the nation's most prominent U.S. Attorney's offices said Tuesday he is resigning after nearly thre…

Dominion Virginia Power began making test borings in the Atlantic Ocean off Virginia Beach as part of its research aimed at harvesting offshore wind energy, as shown in this July 2014 photo.