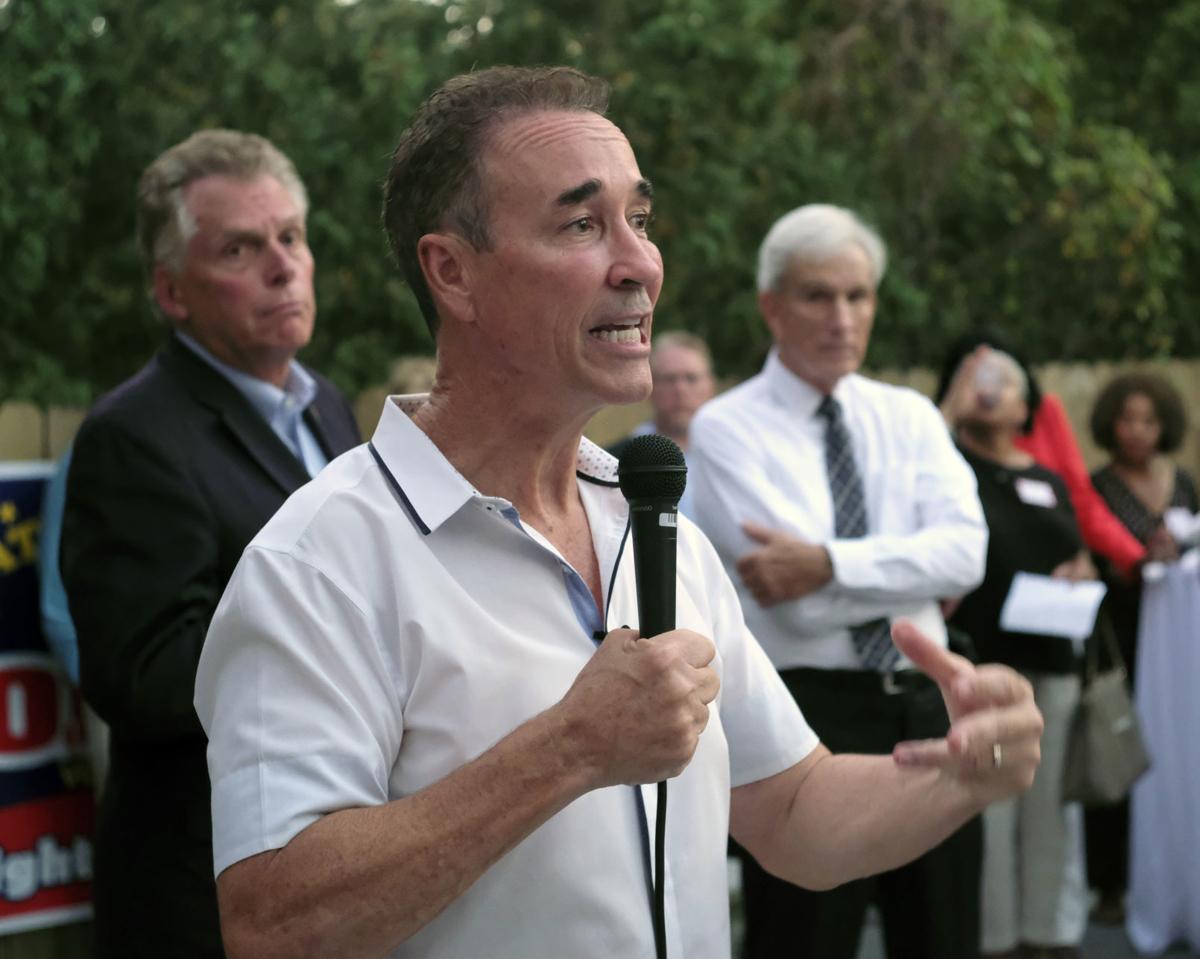 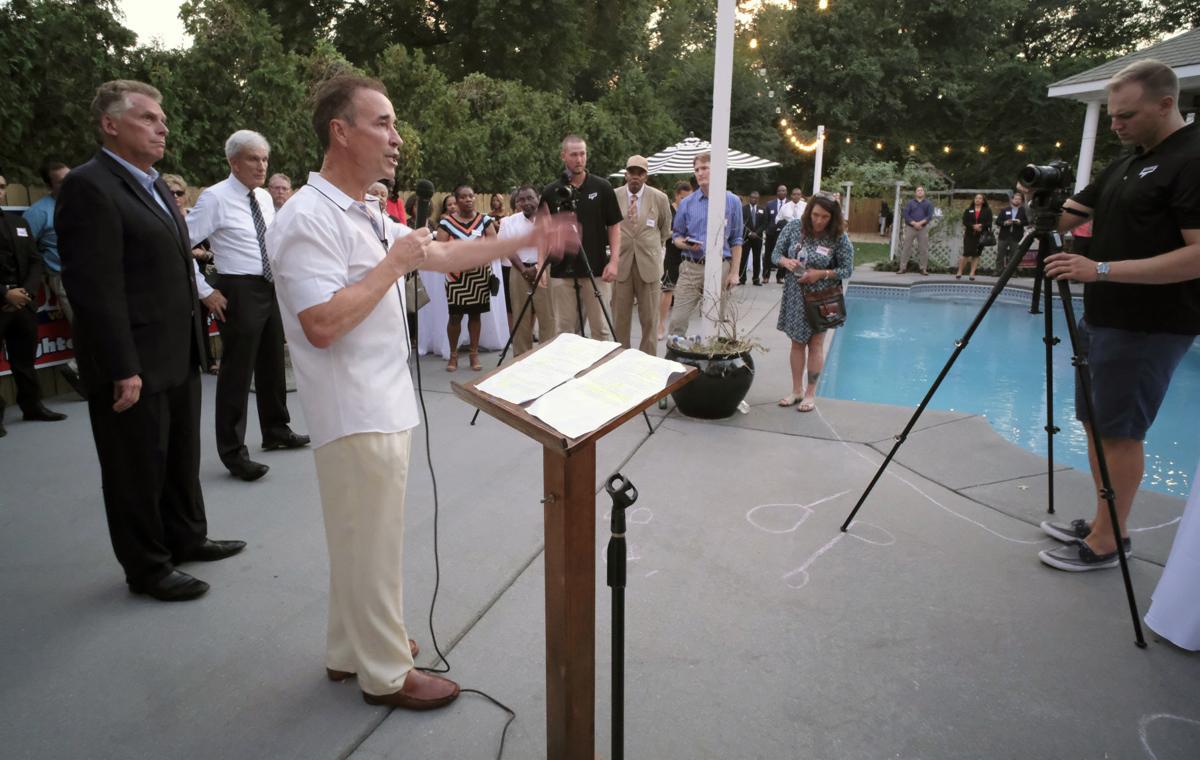 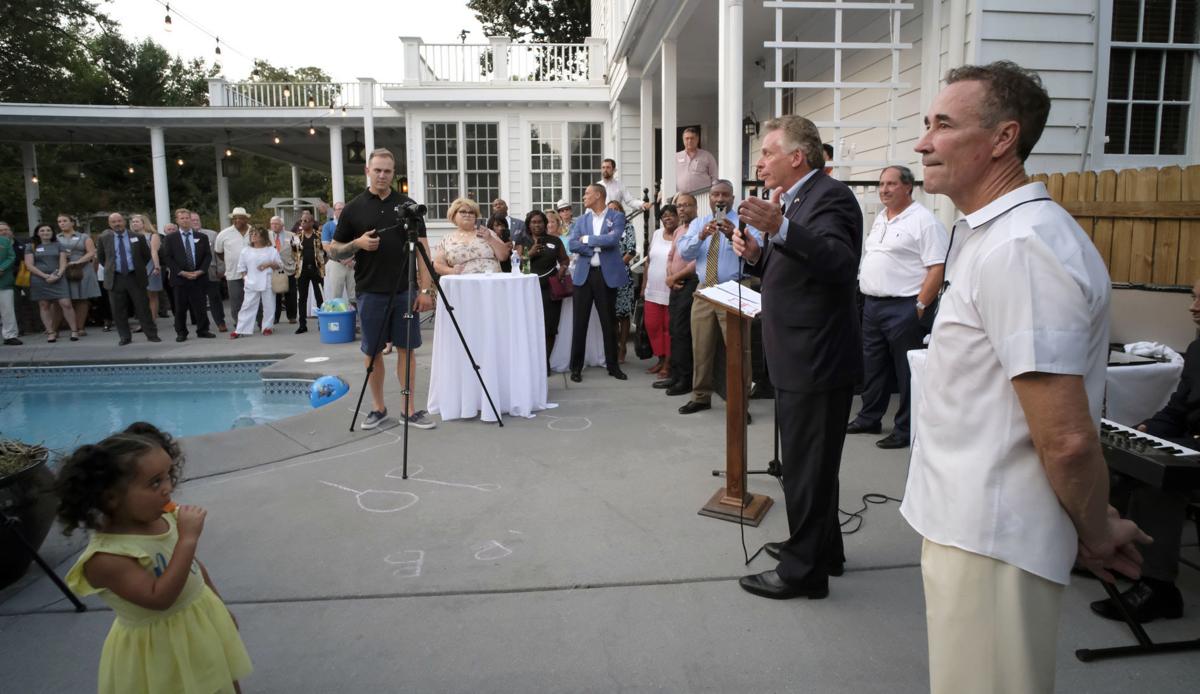 McAuliffe introduced Morrissey as the candidate’s daughter, Bella, 3, looked on. 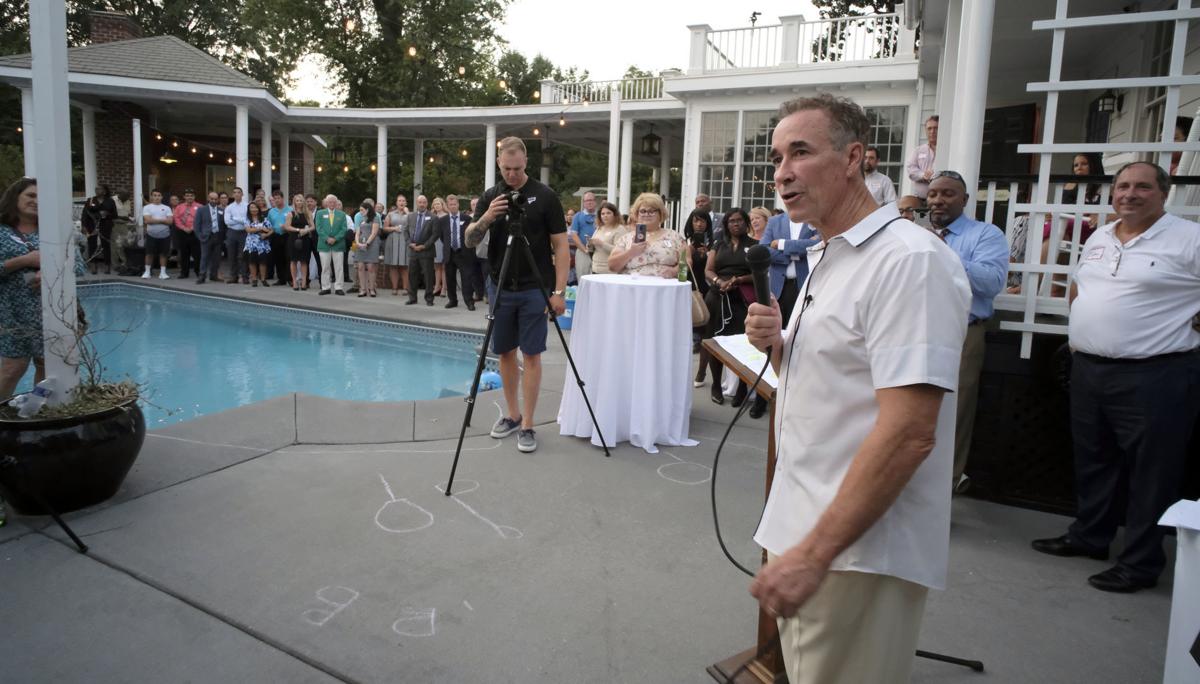 Two of the men who run Virginia’s Democratic Party came to the Richmond home of Joe Morrissey on Wednesday to host a fundraiser for him and make nice with a politician who ousted a Democratic state senator in a primary.

In June, the former lawmaker and Richmond mayoral candidate defeated state Sen. Rosalyn Dance, D-Petersburg. Former Gov. Terry McAuliffe, who is leading fundraising efforts for Democrats in Virginia this year as they try to retake the legislature, and Senate Minority Leader Dick Saslaw of Fairfax County both worked on behalf of Dance.

On Wednesday, they mingled with Morrissey; his wife, Myrna; and his supporters as they ate barbecue around the pool at the couple’s North Side home and the Morrissey children played in the yard.

McAuliffe, speaking to the group, said he and Morrissey worked together on criminal justice issues, and recalled Morrissey joining him and other lawmakers at a Capitol ceremony when McAuliffe announced a development in his effort to speed up the restoration of voting rights for felons.

Morrissey, describing himself as a “moderate Democrat,” recalled working for Saslaw’s Senate campaign in 1979 and told a humorous story about McAuliffe, years earlier in Dewey Beach, Del., assisting a bar bouncer by representing him before a local constable.

“Terry says, ‘I’m his attorney,’” Morrissey said, and the man was “acquitted at 2 o’clock in the morning,” after which the bouncer and McAuliffe returned to the bar.

“He never tried another criminal case in his life and he’s batting 1,000,” Morrissey quipped, receiving applause from the audience.

On a serious note, Morrissey said his top priorities in the Senate will be helping fight drug addiction, finding ways to help people with mental health problems who are in the court system, and pushing for Virginia to restore parole.

“I want to restore hope. I want to give people incentive,” Morrissey said. “I want them to know, if you’re in prison and you do well, you take advantage of programs, you get an education, then when you come out, OK, there’s something there for you.”

Democrats are hoping to retake control of both chambers of the General Assembly in the Nov. 5 election, which would allow the party to pass its agenda along to Democratic Gov. Ralph Northam to become law. Morrissey is important to the party because Democratic leaders need him on their team if the Democrats narrowly control the Senate, which is currently in Republican hands, 20-19, with one seat vacant pending the election.

In the possibility of a 20-20 tie, Democrats could still get their agenda through the chamber next year because the Democratic lieutenant governor, Justin Fairfax, would break most tie votes. But if Morrissey, who calls out Democrats with whom he disagrees, were to defect, he could stop the Democratic agenda on any issue he chose.

“Joe is a hard worker and the people in the Senate district, they’re definitely going to get their money’s worth,” Saslaw said. “We are looking forward to having him in our caucus. Joe is extremely bright.”

The fundraiser was emceed by radio host John Fredericks, who was the 2016 chairman of the Trump presidential campaign in Virginia but is a Morrissey ally and McAuliffe booster. Morrissey’s “Fighting Joe Morrissey Show” airs in the Richmond area on WJFN (100.5 FM), which also broadcasts Fredericks’ show.

The relationship between Democratic leaders and Morrissey is one of necessity, Fredericks said in an interview.

“If it’s 20-20, the next day Joe Morrissey becomes the most powerful man in Virginia,” Fredericks said.

At the fundraiser, Fredericks told the group that Republicans have “zero chance” of holding control of the Senate on Nov. 5 and said Morrissey has the ability to bring both parties together.

Several Richmond City Council candidates showed up Wednesday, along with a contingent of lobbyists who regularly attend such events for state lawmakers.

Morrissey also has a residence in the 16th Senate District, where he slept during the primary campaign after tucking in his children at the family home outside the district. The district covers parts of Chesterfield, Prince George and Dinwiddie counties; parts of Richmond and Petersburg; and all of Hopewell.

Dance outspent Morrissey in the primary, and he later said he won via personal contacts with voters and a signed letters to many of them.

In addition to his populist appeal, Morrissey’s career is known for a scandal that led to him spending nights in jail while serving as a delegate in 2015. He was convicted of misdemeanor contributing to the delinquency of a minor involving relations with a then-17-year-old law firm employee who is now his wife.

Morrissey, a lawyer, has a disciplinary history with the Virginia State Bar and in July the Supreme Court of Virginia upheld a three-judge panel’s decision to revoke his law license.

Waylin Ross, a former legislative aide to Morrissey when Morrissey was a delegate, is on the Nov. 5 ballot as an independent. There is no Republican on the ballot.

Decision 2019: Coverage of state and local elections in the Richmond area

Joe Morrissey does not tweet so he was not aware that Virginia’s Democratic leadership didn’t congratulate him on Twitter on Tuesday night, as…

McAuliffe introduced Morrissey as the candidate’s daughter, Bella, 3, looked on.