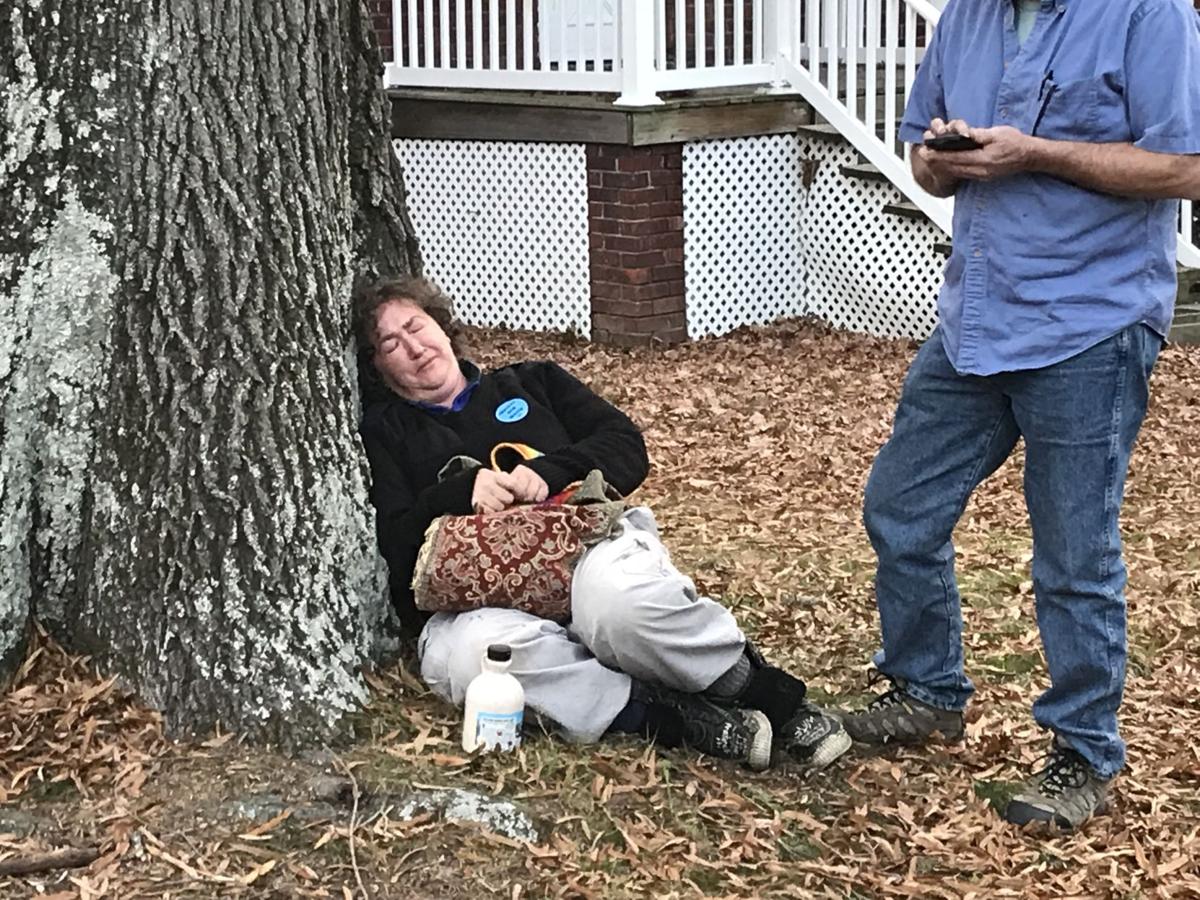 Across the street from the Henrico community center, Mara Robbins, an anti-pipeline activist from Floyd County, cries after the board vote. 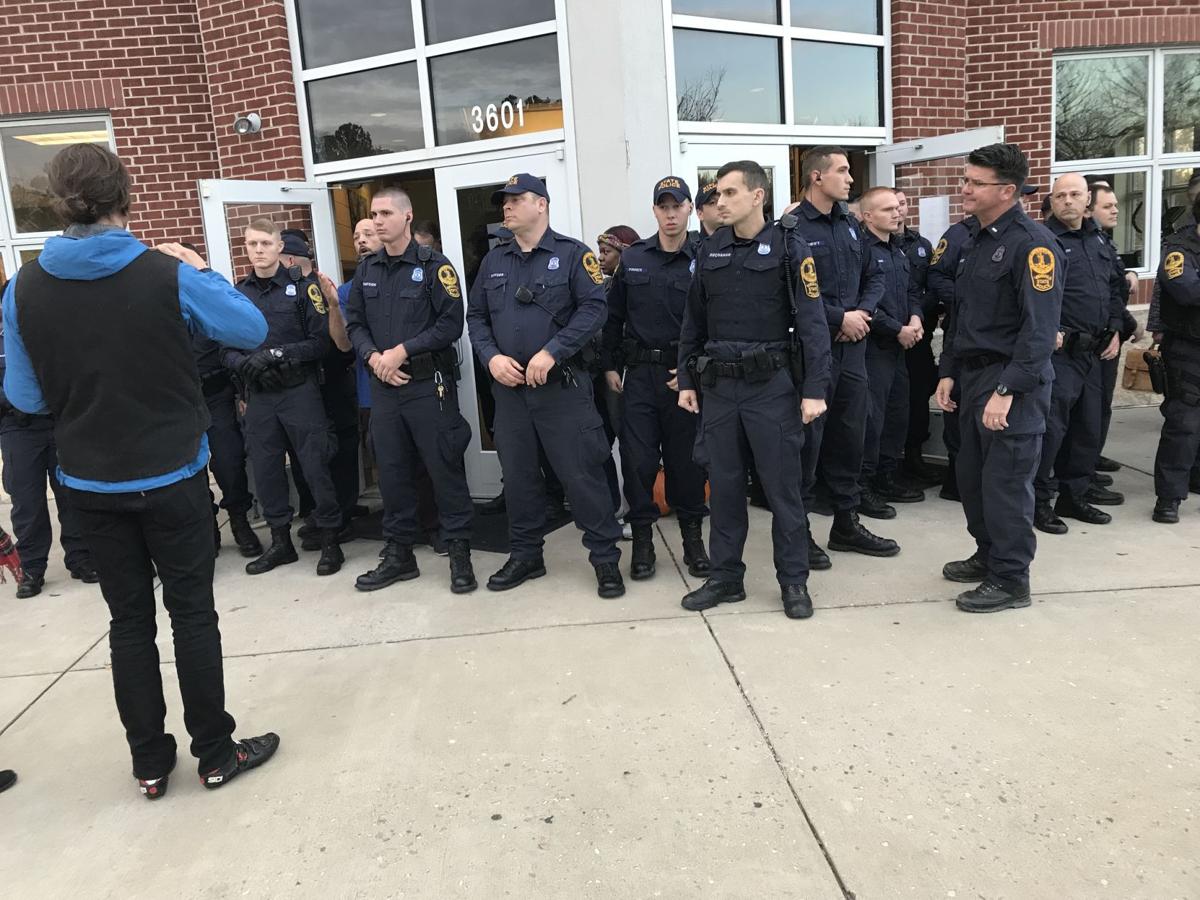 Police cleared the audience from a Henrico County community center auditorium on Thursday afternoon after a state board’s approval of a water-quality certification for the Mountain Valley Pipeline triggered shouts and profanity.

Police cleared the audience from a Henrico County community center auditorium Thursday afternoon after a state board’s approval of a water-quality certification for the controversial Mountain Valley Pipeline triggered an eruption of shouts and profanity.

For the past two days, the Virginia State Water Control Board had weighed approval of the certification, which includes a “reasonable assurance” that the 300-mile project from West Virginia to Pittsylvania County will protect state waters chiefly from sediment potentially dislodged by construction. Two members of the seven-member board, Roberta Kellam of Franktown and Nissa Dean of Midlothian, voted against the certification.

At least one member of the audience screamed profanities at the board members and vowed to visit them where they live.

Board members did not hang around for interviews after the meeting, held at Trinity Life Family Center to accommodate the expected crowds. A phalanx of state troopers cleared the room and then told audience members to leave the property once outside. One man was escorted away by police but state police said there were no arrests.

“I just feel really shell-shocked,” said Carolyn Reilly, a Franklin County farm owner whose property is in the pipeline’s path. Reilly described the seesaw meeting as a “roller coaster.” It saw one board member ask if the body had the authority to deny the certification and invite the applicant to reapply, lengthy wrangling over the intersection of state and U.S. Army Corps of Engineers’ authority over the water quality certifications and a last-minute move to amend the certifications to clarify the board’s intent.

“I got off the ride and my head is spinning,” Reilly said.

One of the major changes board members approved appeared to clarify that the board’s certification would only extend to “upland” areas, places on ridges or mountaintops that could affect waterways below, not actual crossings. The Army Corps has yet to decide how it will handle the pipeline permits and some board members were concerned about waiving their authority if the board has to prepare another certification for water crossings.

“All of this confusion is DEQ’s fault. If they had approached this in a combined fashion, as is required ... we wouldn’t have this confusion,” said David Sligh, an environmental attorney, former Virginia Department of Environmental Quality engineer, conservation director for Wild Virginia and an investigator for the Dominion Pipeline Monitoring Coalition. “It was irresponsible for them to go forward as they did.”

DEQ has faced major criticism for how it has prepared the water quality certifications for the Mountain Valley Pipeline, led by EQT Midstream Partners of Pittsburgh, and the longer, Dominion Energy-led Atlantic Coast Pipeline, which comes before the board next week.

Under the federal Clean Water Act, states have the authority to issue water-quality certifications for federally permitted projects such as natural gas pipelines. And opponents have contended the process that reached an ugly end Thursday for the MVP before the water board has serious flaws — namely a deferral to the Army Corps of Engineers for where the MVP will actually cross waterways. DEQ will also approve the pipeline developers’ plans to manage erosion, sediment and stormwater separately, which raised the question of how the board could evaluate water quality impacts without considering what DEQ itself has called crucial plans to protect streams.

“What’s the rush? Other than MVP’s self-imposed deadline, what is the reason for needing to take a definite action at this time. We didn’t see one,” said Ben Luckett, an attorney with Appalachian Mountain Advocates. “There’s no reason the board could not have denied this.”

Luckett and other attorneys say they see a strong basis for a legal challenge to the board’s decision.

DEQ spokesman Bill Hayden said the agency would not give interviews after the board’s decision but provided a statement.

“This certification is part of the most rigorous regulatory process to which a proposed pipeline ever has been subjected in Virginia,” the agency said, adding that the staff “has been diligent to ensure that all appropriate practices are in place to meet all water quality challenges identified. We have worked closely with our attorneys to make sure we have met all the requirements of state and federal law for which DEQ is responsible.”

After the vote, across the street from the community center, Mara Robbins, an anti-pipeline activist from Floyd County, sat on the ground sobbing, her head leaning against a tree.

Sligh, who has worked to oppose the pipelines for years, said the outbursts at the end of the meeting were certainly not reflective of the vast majority of the people fighting the projects.

“I can’t support anybody being threatened or harassed. I understand people are emotional and I don’t criticize them for that, but threats or harassment, I can’t support that,” he said.

HARRISONBURG, Va. (AP) — After wrapping up a 24-hour shift at the Harrisonburg Fire Department on Maryland Avenue on Monday, Alan Wampler head…

Videos show fatal shooting during rampage at the Capitol

Across the street from the Henrico community center, Mara Robbins, an anti-pipeline activist from Floyd County, cries after the board vote.

Police cleared the audience from a Henrico County community center auditorium on Thursday afternoon after a state board’s approval of a water-quality certification for the Mountain Valley Pipeline triggered shouts and profanity.