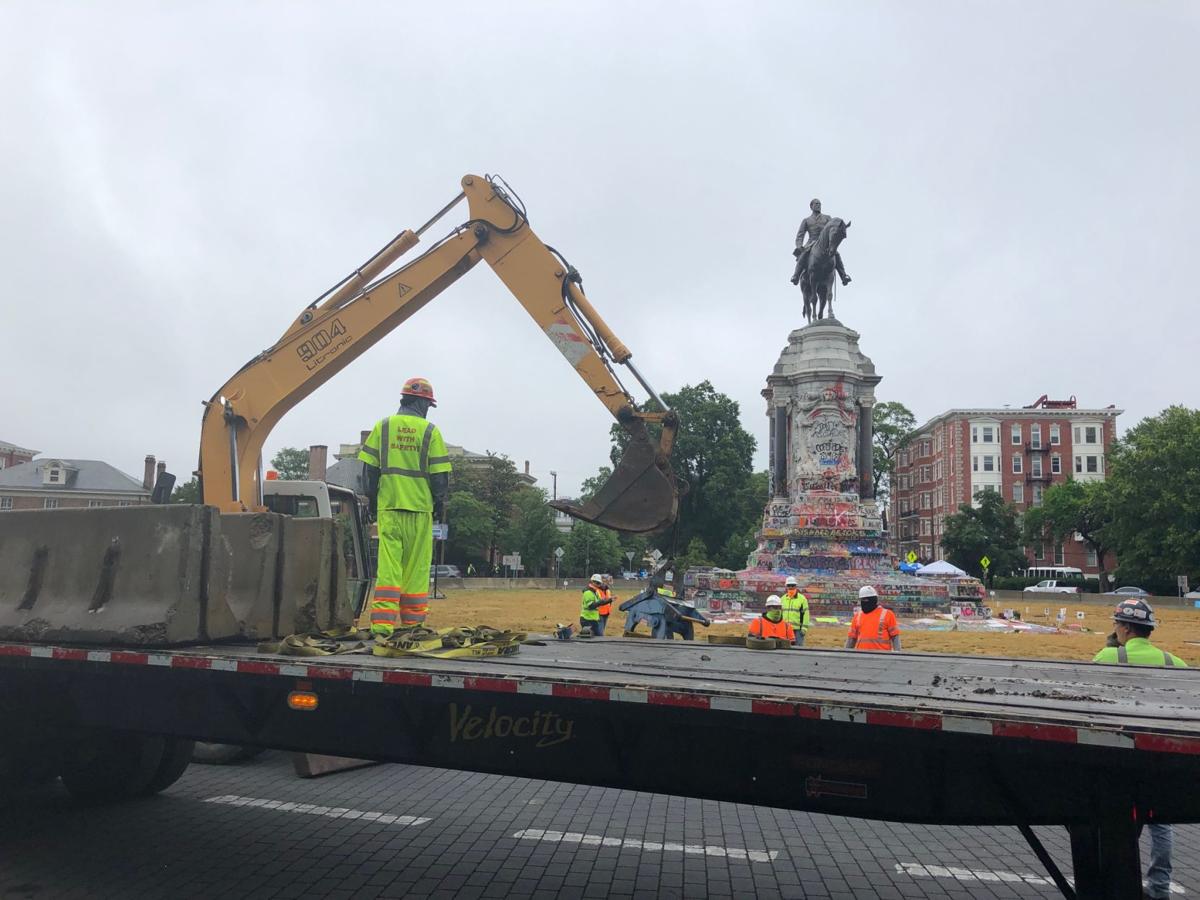 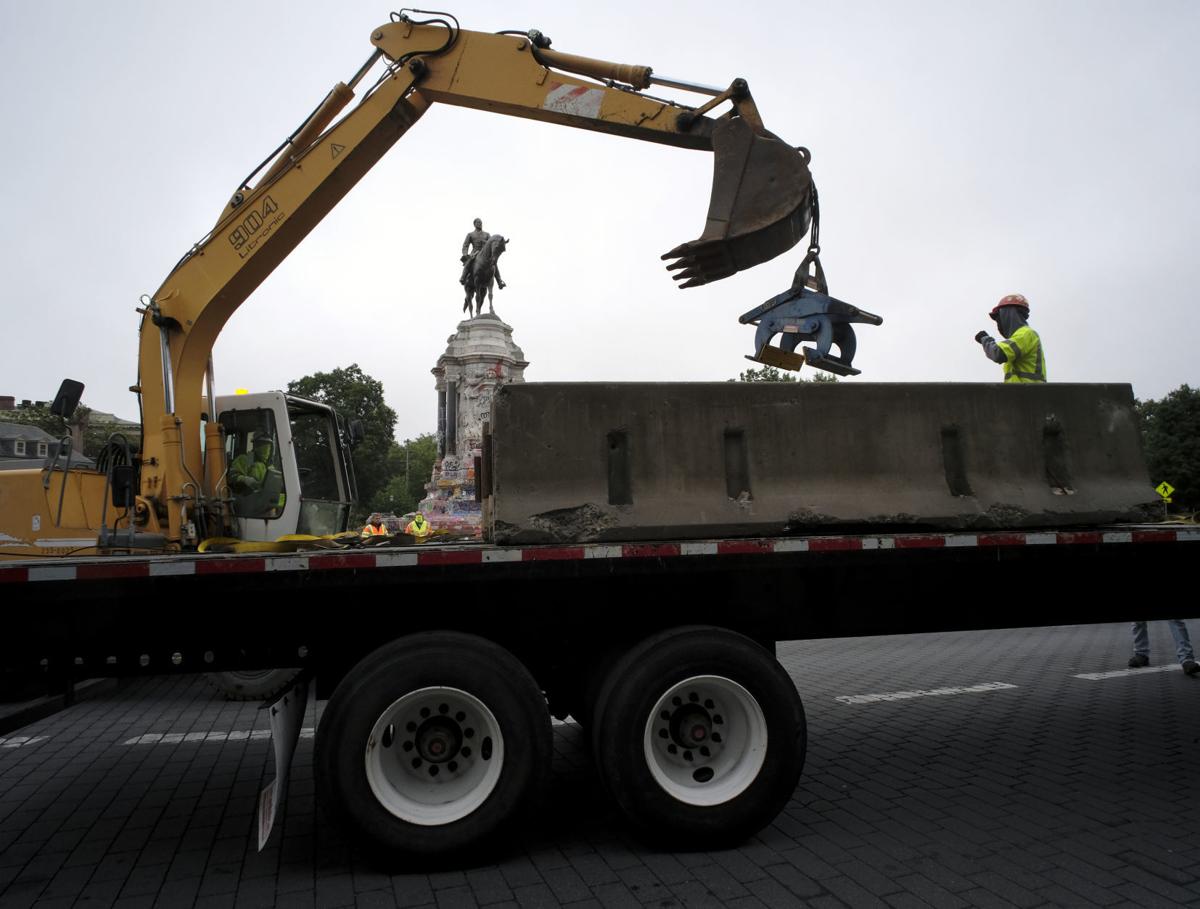 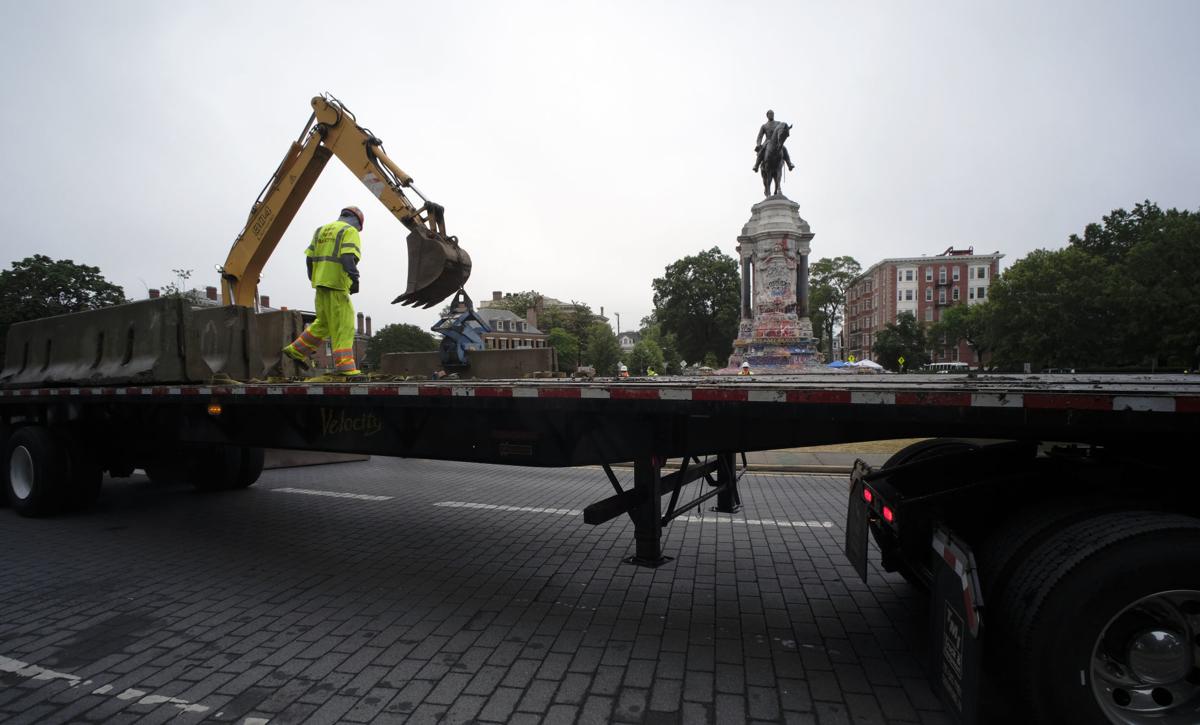 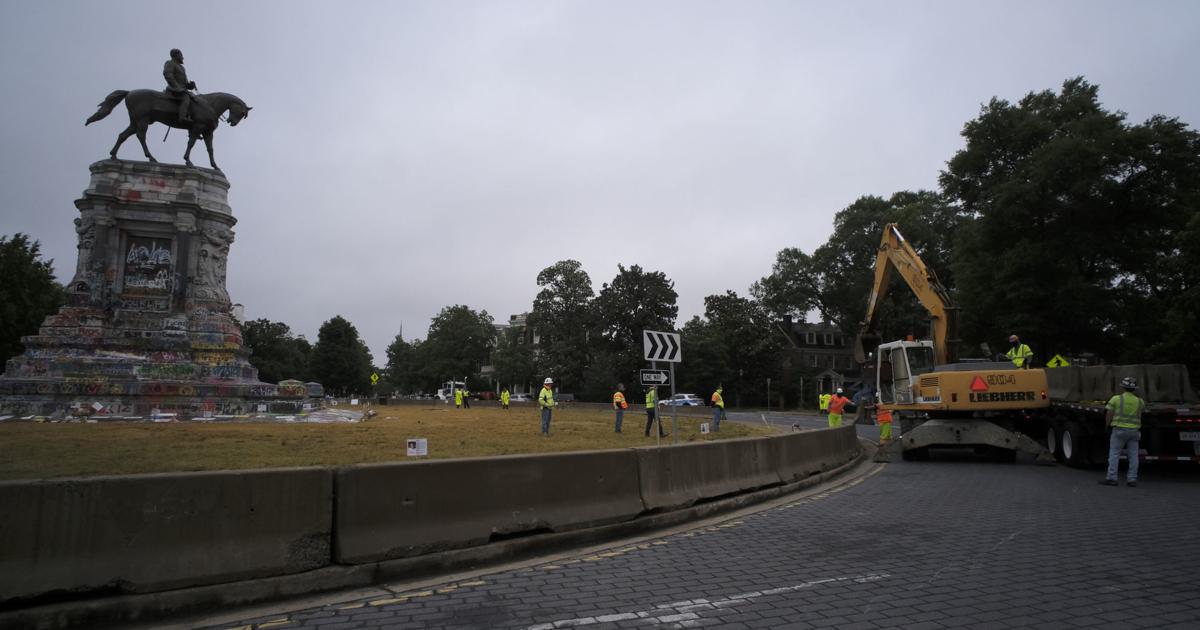 The Department of General Services said the concrete barriers are temporary. Gaps allow people to access the land around the statue.

Ahead of a hearing Thursday in Richmond Circuit Court that could decide the future of Richmond’s most prominent Confederate symbol, six Monument Avenue residents who filed a separate suit against Gov. Ralph Northam’s bid to remove the statue of Robert E. Lee have withdrawn their suit in federal court.

The residents are asking that their lawsuit be consolidated with the case in Richmond Circuit Court that’s already led to a temporary injunction barring the state from removing the Lee statue. A Richmond judge’s 10-day injunction expires Thursday.

The legal maneuvering occurred as state workers stationed concrete barriers around the statue of the Confederate general, with state crews preparing for its possible removal.

The future of the 130-year-old monument is at the heart of a fight that has played out in Richmond’s streets and its courts in the weeks since George Floyd was killed in the custody of Minneapolis police. Demonstrations have spotlighted long-standing inequities and incidents of police brutality as well as Richmond’s conspicuous Confederate tributes.

“We have not asked to prohibit the removal” of the statue “based on federal law,” McSweeney said. “So there’s no reason for it to be in federal court. It’s a state issue. It should be decided in a state court.”

In response to the filing, Charlotte Gomer, a spokeswoman for Attorney General Mark Herring, said of the Lee statue: “This is a symbol that needs to come down and [Herring] will continue to work to make that happen.”

Herring had the Monument Avenue residents’ case moved to federal court Monday, saying the lawsuit’s arguments, specifically that removing the statue is in conflict with federal law as it relates to National Historic Landmarks, warrants it being heard in federal court rather than Richmond Circuit Court.

The residents, only one of whom, Helen Marie Taylor, is named, argue that removing the Lee statue and others along Monument Avenue, which members of the Richmond City Council say they plan to take down, would hurt property values and endanger tax benefits for living within a historic district.

When Northam ordered June 4 that the Lee statue be taken down, he directed the Department of General Services to do so “as soon as possible.” Before the agency could remove it, Richmond Judge Bradley B. Cavedo issued a 10-day injunction that lifts Thursday, when a hearing is scheduled in circuit court.

That lawsuit, filed by William Gregory, the great-grandson of two signatories of the original 1890 deed that gave Virginia control of the statue and the land around it, claims that under the terms of the agreement, the state is supposed to consider the monument and the area around it “perpetually sacred” and “faithfully guard it and affectionately protect it.”

In a letter to Herring dated Tuesday, Gregory’s lawyers proposed that Virginia hold a statewide referendum posing the question of whether or not the Lee statue should be removed. If a majority of people voted that it should be taken down, then the lawsuit would be withdrawn. If not, the statue would stay.

The offer, according to the letter, expires if it’s not accepted before Thursday’s hearing. Gomer called it a “nonstarter.”

“This random person who came out of nowhere doesn’t get to dictate what the commonwealth does with its own statue,” she said. “The statue needs to come down and AG Herring will continue to work to make that happen.”

DGS said it will continue to work on its removal plan “while we await the outcome of litigation.”

“DGS appreciates Virginians’ patience as we work to carry out the governor’s direction to remove the statue,” the agency said in the news release.

DGS said the roughly 3-foot barriers are temporary and “are intended to protect the safety of everyone speaking out to make their voices heard, as well as the structure itself.” Gaps in the barriers allow people to access the land around the statue, which has become the epicenter of the city’s activism since the killing of Floyd late last month, prompting nationwide calls to end police brutality and racial injustice.

Graffiti has been spray-painted on nearly every inch of the statue’s 40-foot pedestal. While protesters have torn down three Confederate statues and one of Christopher Columbus, the Lee statue is the tallest and heaviest (roughly 12 tons) in the city.

With the future of the Robert E. Lee statue being decided in the courts, the Richmond Times-Dispatch spoke with Alex Johnson, a law professor at the University of Virginia with expertise in contracts and property, about the lawsuits.

Below are his answers, in his own words.

1) What role might current events play in the legal decision on the Lee monument?

In a perfect, apolitical world, current events should play no role. However, in this highly charged atmosphere any judge will no doubt internalize any possible criticism or reputational harm any ruling might have given the nature of the issue.

2) One of the lawsuits says the statue's place on the National Register of Historic Landmarks bars it from being removed. Is that valid reasoning? Why or why not?

This is beyond my area of specialization so I will have to say no comment.

3) A Richmond judge granted an injunction based on a different lawsuit that says the original 1890 deed prevents the statue's removal. If the deed gives the state control of the statue, why would the original transfer language matter?

A deed doesn't give the state control of the statue, it transfers the ownership of the land upon which the statue sits to the state. Depending on the legal effect of the deed's language as interpreted by the arbiter or judge, the deed can be construed as transferring a fee simple absolute - that is ownership with no restrictions and the statue can be removed.

If this is the outcome, the judge would likely find that the language quoted to protect and preserve the statue is what is called "precatory" language, which means that the grantor wishes something to happen or be maintained but is not mandating it as a condition of the conveyance or transfer. Alternately, some might construe the deed as creating what is called a fee simple determinable - that is, to the state for so long as the statue remains on the land which the state "will faithfully guard and affectionately protect it." In that case, if the state removes the statue, which it can still do, it loses the land.

A third alternative is to treat the state's quoted promise as a covenant or promise and to view the deed as creating a contract between the grantors - Gregory, et.al. and the state, and if the state breaches the contract the party who has standing (the appropriate Gregory heir or devisee) can sue to enforce the promise. In that case, a judge will decide whether damages or an injunction is the appropriate remedy if a breach is found.

It is less likely that a judge will enjoin the state to keep the statue because that would require an affirmative injunction, i.e., do something affirmatively, rather than a negative injunction which is easier to enforce and monitor, i.e., don't remove the statute.

A fourth alternative is to treat this as you would a charitable gift, think a donation to UVA with a specified purpose, think baseball scholarships, and the school eliminates baseball as an intercollegiate sport. Is the original gift an outright gift allowing the school to use the donated money for any educational purpose?

About half the litigated cases find an outright gift. Or, is the transaction between the donor and the donee school contractual, creating again an enforceable right in the donor to sue the donee? About forty percent of the cases find a contract. Then there are the outlier cases that find a conditional gift, a gift given with conditions that if not complied with result in the revocation of the gift. There is yet another line of cases which apply a doctrine called cy pres (Latin for changed conditions), which permits the court to use its equitable powers to change the purpose of a charitable gift or trust if societal or other conditions have changed to preclude the attainment of the goal of the gift of the trust. I can see a innovative jurist saying that the purpose of the gift is to honor the Confederacy and Lee and that purpose is not attainable given the social mores that currently exist.

One last thing to note which hasn't been mentioned, if the State has to keep the statue or give the land to a Gregory heir, the state has the power of eminent domain to take the land for the public good especially given its location and visibility. In this scenario they would have to compensate the landowners, which may just be the state or the state and some Gregory heir if the transferors retained an interest when they conveyed the property to the state.

4) In your legal opinion, does the governor have the authority to remove the statue? Why or why not?

Again, no comment, I am not an expert on executive power. My answer to your third question is simply determining whether the original conveyance to the state creates remnant rights in the heirs of the grantors of the land which may or may not be enforceable against the state if the state attempts to remove the statute.

The statue of Robert E. Lee on Richmond’s Monument Avenue isn’t the only tribute to the Confederate general that could soon come down.

The Department of General Services said the concrete barriers are temporary. Gaps allow people to access the land around the statue.