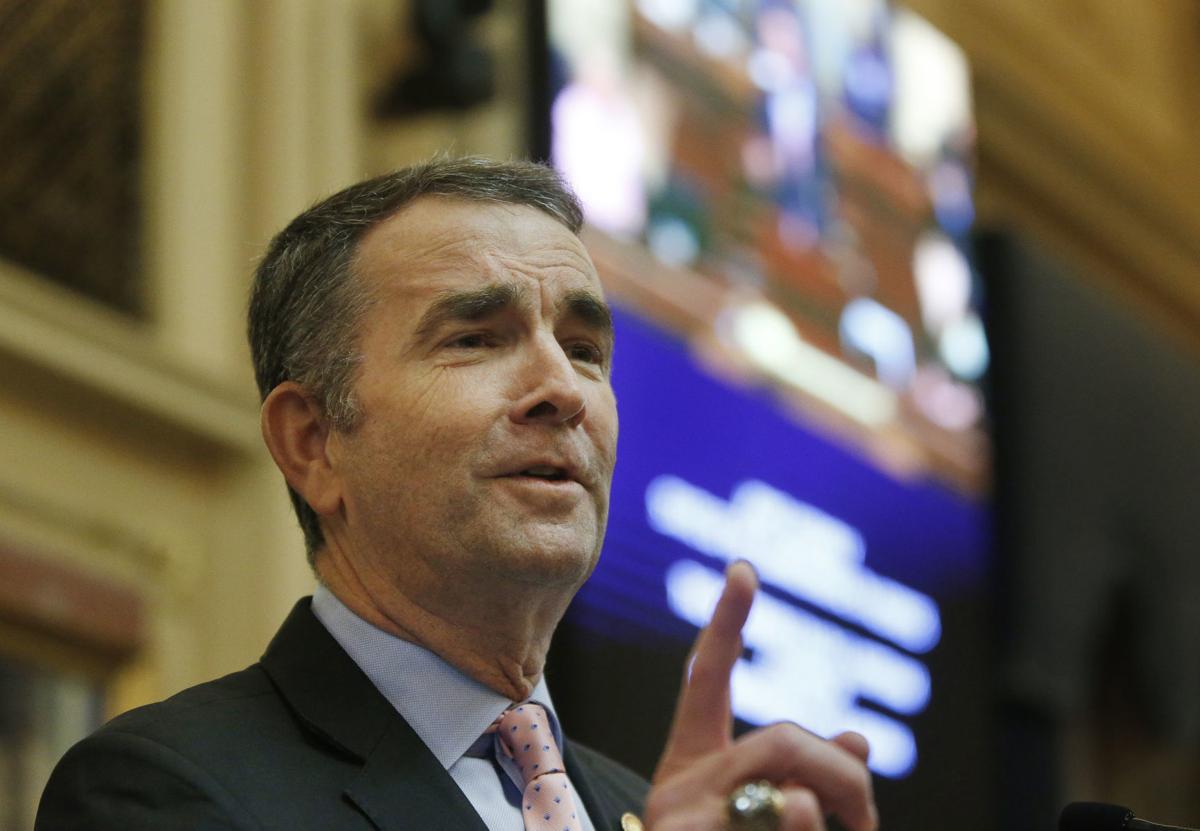 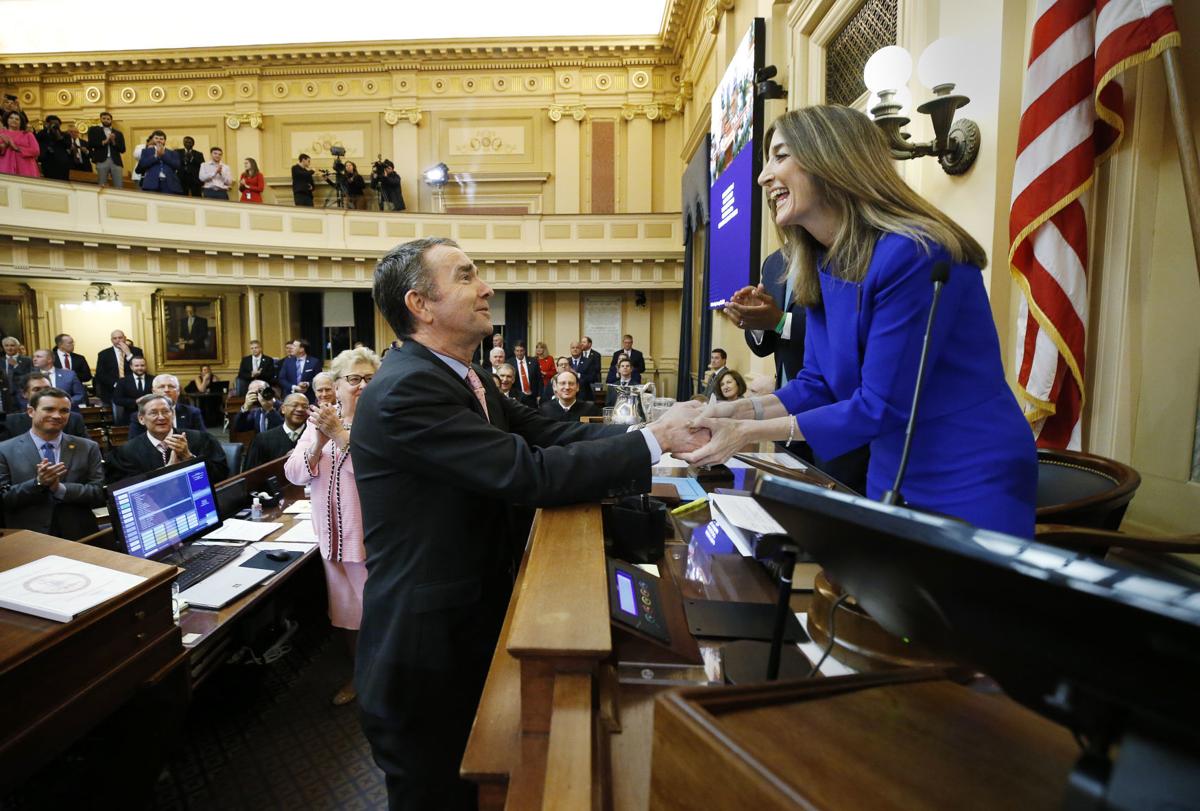 Gov. Ralph Northam greeted new House Speaker Eileen Filler-Corn, D-Fairfax, as he entered to deliver his State of the Commonwealth address on Jan. 10. 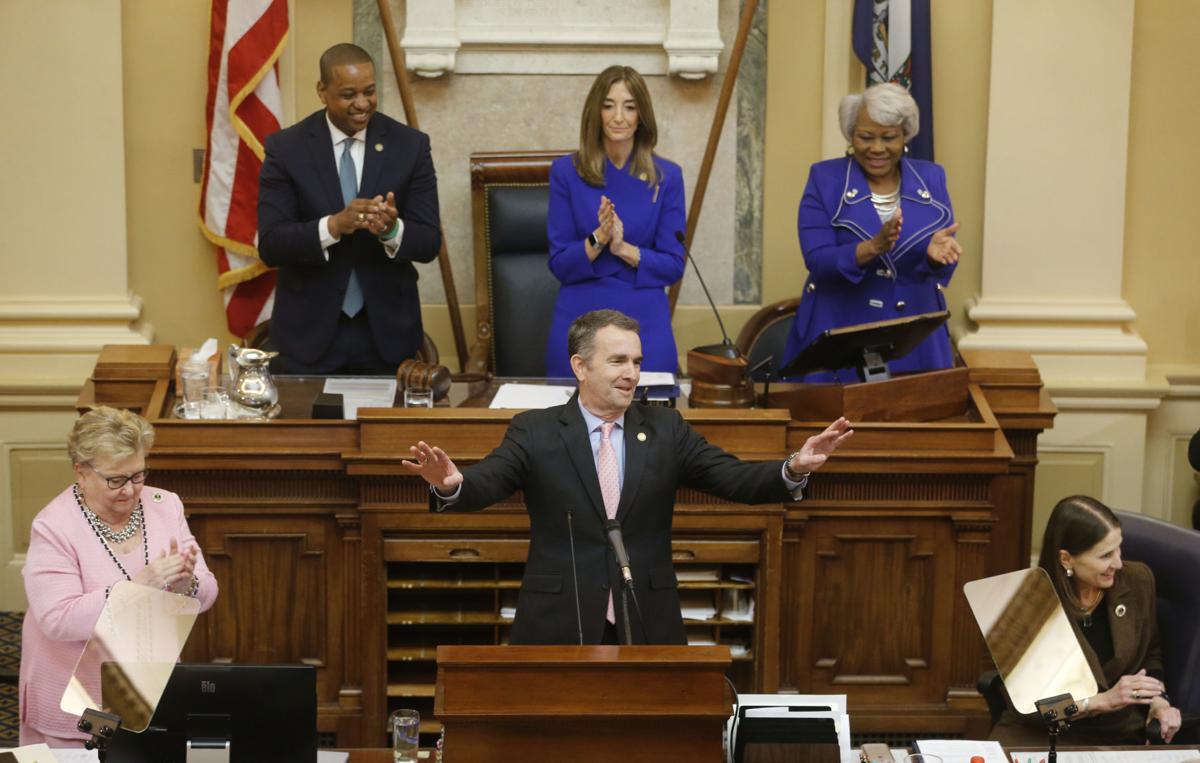 Gov. Ralph Northam quiets the joint session of the General Assembly on opening night of the 2020 legislative session on Wednesday, January 8, 2020. Behind him are Lt. Gov. Justin Fairfax, House Speaker Eileen Filler-Corn and President Pro-tem of the Senate Louise Lucas. In front of Northam are Senate Clerk Susan Clarke Schaar at left, and House Clerk Suzette Denslow at right.

Gov. Ralph Northam described a changing Virginia that is increasingly diverse and progressive Wednesday night, vowing in his annual address to the state legislature to lead the state according to that change.

It was Northam’s first State of the Commonwealth address to a Democratic-controlled state legislature after voters gave his party majorities in both chambers in November. He delivered his nearly hourlong speech before a chamber presided over by the first female House speaker, and the most racially and ethnically diverse legislature the state has ever convened.

It was a celebratory occasion for Democrats, and Northam twice stepped aside to turn the focus to Speaker Eileen Filler-Corn of Fairfax County and President Pro Tempore Louise Lucas of Portsmouth, the first woman and African American elected to that post.

Northam said the last decade saw growth in the state’s population, changing views on environmental protection, and demands from Virginians recovering from the 2008 recession to make economic growth more accessible.

Northam did not vacillate when it came to proclaiming the proposed policy changes Virginians can expect to see out of the gate under Democratic control — a slew of liberal propositions from gun control to abortion access that would have had little chance of succeeding in a GOP-controlled legislature.

Addressing a joint session of House and Senate lawmakers, most of whom called for him to leave office 11 months ago, Northam made no direct mention of the blackface scandal that nearly toppled his administration.

“When I’m down,” he said, “I search for new ways to carry out my responsibilities.

“Believe me, I’ve found some over the past year.”

True to form, Northam spoke amply of maintaining the state as an attractive place for business and increasing its financial reserves to protect state assets in the event of a downturn. He touted the Amazon deal that brought the company’s next headquarters to Northern Virginia, and spoke at length about his pitches to make Virginia a leader in offshore wind manufacturing and to offer free community college to people willing to fill high-demand jobs.

“Let’s always remember that good conditions for workers depend on a strong economy and a strong business climate,” Northam said.

At the same time, Northam all but guaranteed an increase to the minimum wage — long suppressed by Republicans who argue it would deal a blow to business growth.

“Just because you have a job doesn’t always mean you can survive on it. The people who are building our economy should benefit from it, too,” Northam said. “The companies that recognize this will get ahead. So let’s work together to raise the minimum wage.”

He also called for letting localities decide what to do with the Confederate monuments in their communities, adding: “They know the right thing to do.”

In the official Republican response, Sen. David Suetterlein of Roanoke County and Del. Roxann Robinson of Chesterfield County warned that Democrats’ plans could damage the state’s growing economy, which they said could largely be credited to Republican leadership.

Robinson said that “onerous burdens to Virginia businesses” could cripple the state’s economy, while Suetterlein said that tax increases will “have a profoundly negative effect on Virginia’s working families.”

The response also included offerings of bipartisanship on issues like driver’s license restoration for people with unpaid fines and fees, which Northam has championed. Robinson also praised a “day of historic firsts” that saw a handful of female lawmakers elevated to positions of power that women had never held before.

“Regardless of party, today is a day all Virginians can be proud of,” she said.

Bipartisanship will remain a long shot on a ream of proposals Northam proclaimed as Democratic priorities that have little to no GOP support.

Without using the word abortion, Northam said that the state would no longer “be telling women what they should and should not be doing with their bodies.”

Northam said the state would invest heavily in “combating climate change,” a concept Republicans at the state and federal level have not embraced as Democrats speak of it as a present crisis.

And Northam is pushing for the decriminalization of marijuana, swapping misdemeanors for a civil penalty in cases where people are found with small amounts.

Northam ended his speech by looking ahead at the “long and painful” election year, deriding the president without uttering his name.

“In Virginia, we treat each other with respect. We know that nasty tweets and name-calling are wrong,” Northam said.

“I think we all want to live in a country where we’d be proud if our young child can look to our country’s leaders and say, ‘I want to be like that person when I grow up,’ ” he continued. “We don’t have that now. But we can get it back, and we must.”

Excerpts of Gov. Ralph Northam's State of the Commonwealth address as prepared for delivery

Tonight, after 400 years, the first women are leading this Joint Assembly. Let’s all congratulate them!

More than 400 years after its founding, the Virginia House of Delegates elected the first woman as its speaker, as Del. Eileen Filler-Corn ass…

The $1.5 billion Navy Hill plan hinges on a special tax zone, the size of which has become a major sticking point for opponents of the downtow…

Gov. Ralph Northam greeted new House Speaker Eileen Filler-Corn, D-Fairfax, as he entered to deliver his State of the Commonwealth address on Jan. 10.

Gov. Ralph Northam quiets the joint session of the General Assembly on opening night of the 2020 legislative session on Wednesday, January 8, 2020. Behind him are Lt. Gov. Justin Fairfax, House Speaker Eileen Filler-Corn and President Pro-tem of the Senate Louise Lucas. In front of Northam are Senate Clerk Susan Clarke Schaar at left, and House Clerk Suzette Denslow at right.