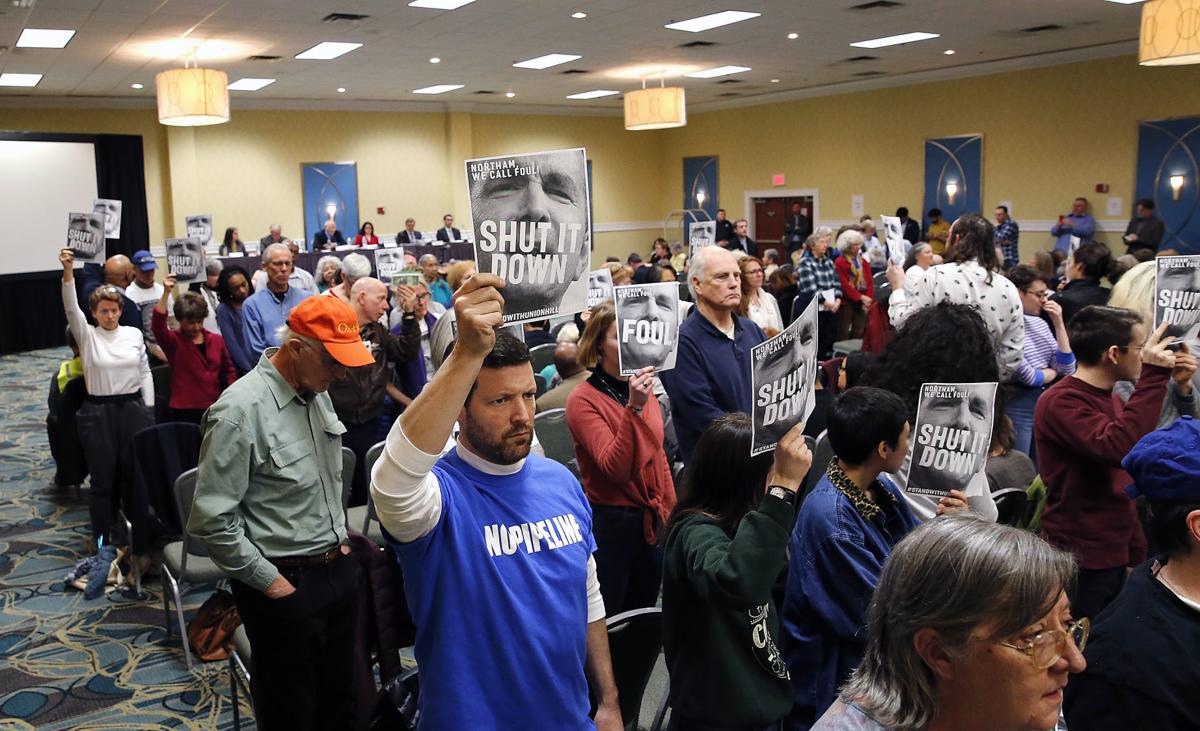 The State Air Pollution Control Board meeting at the DoubleTree by Hilton Richmond-Midlothian to vote on a proposed Buckingham compressor station for the Atlantic Coast Pipeline Tues. Jan. 8, 2019 in Chesterfield County.

A federal appeals court dealt another blow to the Atlantic Coast Pipeline on Tuesday with a ruling that vacates a state air pollution control permit for a natural gas compressor station in Buckingham County for failing to consider the disproportionate health effects on the surrounding, predominantly African American community of Union Hill.

A three-judge panel of the 4th U.S. Circuit Court of Appeals found that the State Air Pollution Control Board had “failed to grapple with the likelihood that those living closest to the compression station ... will be affected more than those living in other parts of the county.”

The 47-page ruling, written by Judge Stephanie Thacker of West Virginia, concluded that the board improperly relied on federal and state air quality standards without deciding whether the compressor station represented an environmental injustice to Union Hill residents, some of whom are descendants of slaves who founded the community after the Civil War.

“But environmental justice is not merely a box to be checked, and the board’s failure to consider the disproportionate impact on those closest to the compressor station resulted in a flawed analysis,” Thacker wrote.

Friends of Buckingham and the Chesapeake Bay Foundation, the organizations that filed the suit through the Southern Environmental Law Center, hailed the decision as vindication for concerns that they said were ignored by the state and pipeline company, led by Richmond-based Dominion Energy.

“Five years ago, Dominion told us that there was going to be a compressor station in Union Hill and there was nothing we could do about it. That’s not fair and it’s not American,” said Chad Oba, president of Friends of Buckingham and a resident of Union Hill. “This is a win for a group of citizens who were committed to protecting their community and never gave up.”

Jon Mueller, an attorney for the bay foundation who argued the case before the panel in October, called the ruling “a major step forward for meaningful environmental justice.”

The panel decision vacated the permit and returned it to the air board, which it also directed to explain why it had failed to consider requiring electric-powered turbines to eliminate most of the pollution emitted by four natural gas-fired turbines for the 58,162-horsepower compressor station.

“Having considered the entire record, we are not satisfied that the board provided a sufficient and rational explanation of its failure to consider electric turbines in place of gas turbines, and [the Department of Environmental Quality’s] responses to the public are likewise insufficient,” Thacker wrote.

Dominion Energy, lead partner in the $7.75 billion project, said it would seek to address the issues raised by the panel in a revised permit for the compressor station.

“In its opinion today, the court recognized the stringency of the permit, while requiring the state to provide more analysis and explanation to support its approval,” Dominion spokesman Aaron Ruby said. “We will immediately begin working with the state to resolve the procedural issues identified by the court.

“We are confident the additional analysis required by the court can be completed in a timely manner,” Ruby said. “We expect the project will still deliver significant volumes [of natural gas] to customers under our existing timeline, even as we work to resolve this permit.”

The 600-mile project is already two years behind its original schedule and about $3 billion over its original budget. The same three-judge panel, including Chief Judge Roger L. Gregory of Richmond, already has thrown out a series of federal environment permits issued for the project, but this is the first state permit the 4th Circuit has rejected.

The U.S. Supreme Court has agreed to hear an appeal by the pipeline company and U.S. solicitor general of the 4th Circuit’s ruling that the U.S. Forest Service could not permit the project to cross beneath the Appalachian Trail in the Blue Ridge Mountains between Augusta and Nelson counties.

The permit battle drew national attention because of environmental justice concerns raised by the project’s location on the former site of an antebellum plantation next to Union Hill, populated primarily by African Americans.

“For the first time since Dominion showed up in Union Hill, I feel like we’ve been heard,” said John Laury, who operates a small farm on land inherited from freed slave ancestors who had “made a way from no way.”

“The court’s decision shows that Dominion can’t ignore our community and pollute our air,” Laury said.

The appeals panel concluded that the air board had “failed in its statutory duty to determine the character and degree of injury to the health of the Union Hill residents, and the suitability of the activity to the area.”

However, the panel also acknowledged the apparent stringency of permit requirements for a project considered a minor source of pollution under federal and state air quality standards.

“What matters is whether the board has performed its statutory duty to determine whether this facility is suitable for this site, in light of [environmental justice] and potential health risks for the people of Union Hill,” it added. “It has not.”

The State Air Pollution Control Board meeting at the DoubleTree by Hilton Richmond-Midlothian to vote on a proposed Buckingham compressor station for the Atlantic Coast Pipeline Tues. Jan. 8, 2019 in Chesterfield County.