Virginia has $3.7 billion deal to expand rail service between Richmond and Washington
22 comments
Share this
Only $5 for 5 months
1 of 2 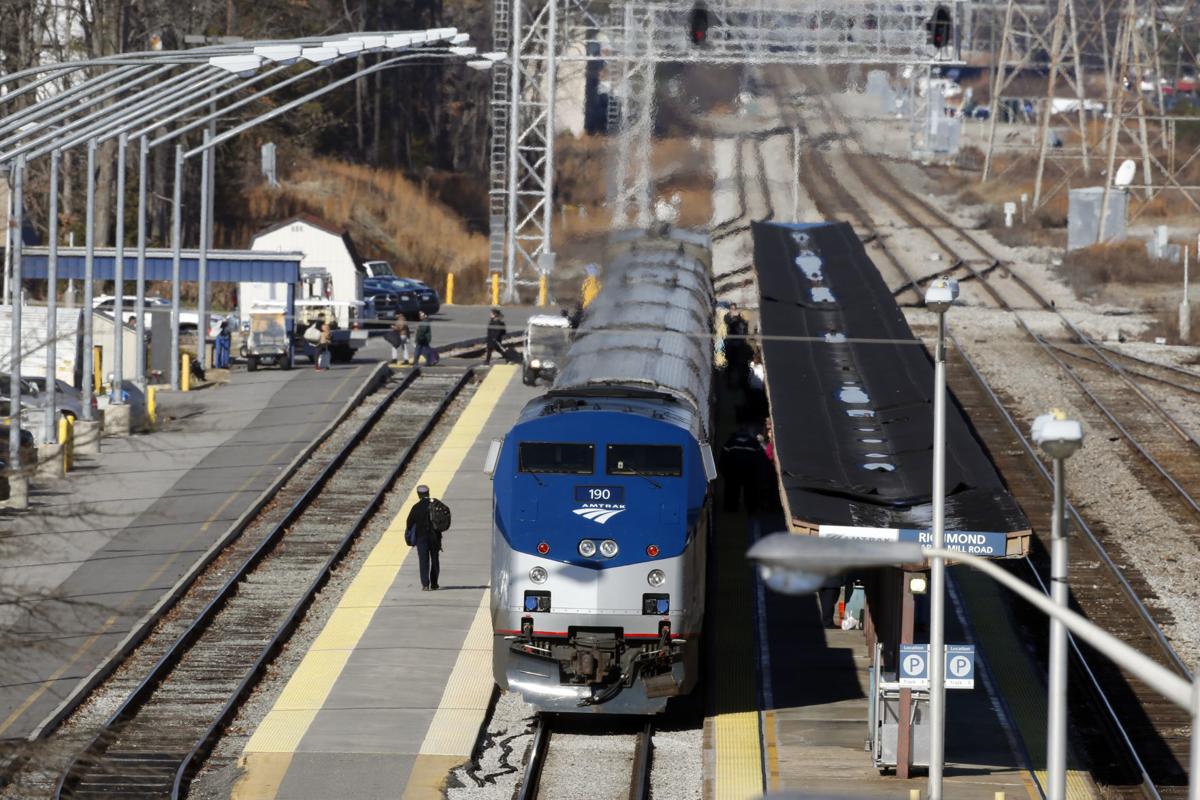 Passengers leave the train at rear, while an employee walks alongside a southbound Amtrak train at the Staples Mill station on Wednesday, Dec. 19, 2019. 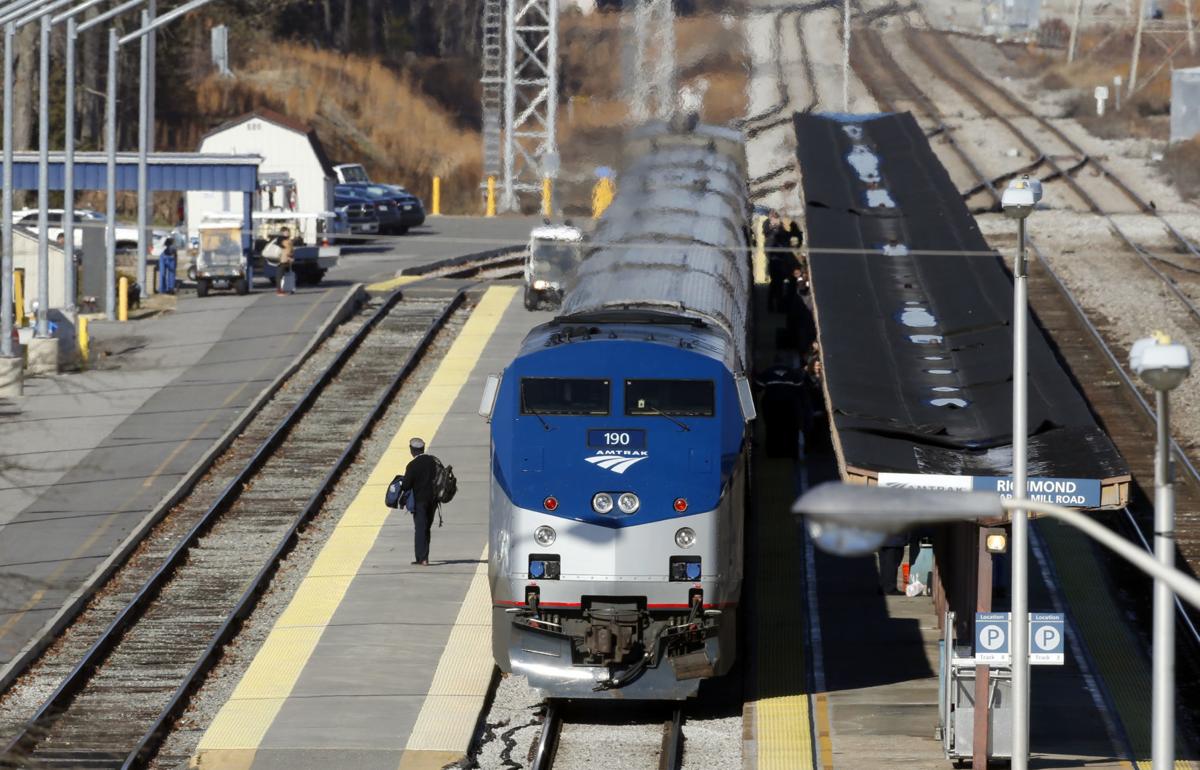 A southbound Amtrak train was on the tracks Wednesday at the Staples Mill Road Station in Henrico County. Five regional trains currently serve the station, but only two stop at Main Street Station in Shockoe Bottom.

Trains will run almost every hour between Washington and Richmond — including Main Street Station downtown — within 10 years under a deal between Virginia and CSX Corp. that will open the gateway for expanded rail service in the region and other parts of the state.

The blockbuster $3.7 billion agreement that Gov. Ralph Northam and CSX announced Thursday will give Virginia control over hundreds of miles of railroad track and underlying right of way in three rail corridors, including the former RF&P line that parallels Interstate 95 between Richmond and Washington. It will not expand the two-track rail line that runs through Ashland, which the state already has promised to preserve.

The cost of the project would be split roughly three ways between Virginia, Amtrak and regional partnerships, but would not require any new state money, state officials said.

“We have a once-in-a-generation opportunity to make our rail system work better for everyone, both in Virginia and along the entire East Coast,” Northam said at the Crystal City headquarters of JBG Smith, the real estate company that helped Virginia land Amazon’s new East Coast headquarters in Arlington County last year.

“This agreement will change the future of transportation in Virginia, improving our ability to move people and goods across the state, and opening up potential rail service in underserved parts of the commonwealth,” he said.

Virginia will send $525 million to CSX, based in Jacksonville, Fla., for right of way and existing track on three rail lines.

The agreement will allow the state to build and own track for high-speed passenger rail service, including expansion of Long Bridge, a 115-year-old railroad bridge across the Potomac River that is critical to passenger and freight service along the Eastern Seaboard but operating at near full capacity.

“CSX is proud of the innovative agreement reached with the commonwealth of Virginia, which will advance our goals for increased safety, efficiency and volume growth while meeting the public’s desire for more passenger rail service to relieve commuter traffic congestion in the I-95 corridor,” CSX President and CEO Jim Foote said Thursday.

Virginia also has an agreement with Amtrak, which would allow the addition of six regional trains for daily service between Richmond and Washington, including one next year, more than doubling capacity and allowing trains to depart almost every hour. The expanded capacity also would allow additional train service to Norfolk next year and Newport News by 2026.

“Offering new options means you won’t have to drive on I-95,” said Danny Plaugher, executive director of Virginians for High Speed Rail.

According to the state rail advocacy group, once the project is completed it is estimated that it will increase ridership by 2.6 million annually and generate about $370 million in annual economic benefit.

“I think this is a historic day for Virginia. I don’t say that lightly,” Plaugher said. “We haven’t owned a rail corridor in well over 30 years. So with taking ownership and having a stake in the corridor between Richmond and D.C., it’s a very big deal.”

“Amtrak is thrilled to be supporting this game-changing rail investment program as an investor and partner,” said Stephen Gardner, senior executive vice president and chief operating and commercial officer for the national rail corporation. “This program is a model for the nation of how to grow passenger and freight service together in order to relieve congestion, protect our environment and enhance mobility.”

The agreement with CSX, to be completed by the end of next year, will give Virginia control of 350 miles of railroad right of way and 225 miles of existing track. The package includes half of the 112 miles of right of way and 39 miles of track that CSX owns between Richmond and Washington.

“It allows us to be in a partnership to separate passenger and freight trains and be in control of our destiny,” Secretary of Transportation Shannon Valentine said in an interview.

The deal also will help free CSX from the constraints of accommodating freight and rail service on the same tracks, Valentine said. “They’re expanding their capacity and we’re expanding ours. It’s a true win-win.”

State transportation officials say the project would relieve traffic gridlock on I-95 at one-third of the cost of adding a new lane to the interstate and allow a major expansion of commuter rail service in Northern Virginia, including additional trains through Manassas that would siphon rush-hour traffic from the heavily traveled Interstate 66 west of Washington.

The agreement envisions contributions from Amtrak, use of state funding from Virginia’s existing partnership with the federal government on the Atlantic Gateway project in the I-95 corridor, and regional toll revenues from the I-66 expansion inside the Capital Beltway. The project would require authorization of bonds, but not for tax-supported debt.

Virginia officials say it’s a cost-effective approach to relieving highway congestion for both the state and region. It will allow the addition of five daily trains by Virginia Railway Express between Spotsylvania County and Union Station in Washington. It also will allow four additional trains on the Manassas line between Union Station and Broad Run in Prince William County.

The project will increase the capacity of VRE by 75%, allowing trains to run on 15-minute intervals in peak hours and add service on weekends.

“Expansion of the Long Bridge will enable us to grow VRE service to include new riders, new hours and new weekend service — in short, to improve the quality of life and economic opportunities for tens of thousands more Northern Virginians,” VRE operations board Chairwoman Katie Cristol said.

In contrast, a state study estimates that adding one lane to I-95 for 52 miles between Springfield in Fairfax County to Thornburg in Spotsylvania would cost $12.5 billion, but that by the day it would open it wouldn’t significantly relieve long-term rush-hour traffic congestion.

“We’ve just got to move away from a transportation system so heavily concentrated on adding asphalt — we can’t afford it,” said Trip Pollard, senior attorney for community and land planning at the Southern Environmental Law Center.

“We have got to be providing more transportation choices and they have to be cleaner,” Pollard said.

Expansion of the VRE Manassas line also would divert traffic away from I-66, which is why state officials are working with the Northern Virginia Transportation Commission to devote a portion of new toll revenues to the project. Additional rail service on the line is subject to negotiation with Norfolk Southern Corp., which owns a portion of the track, but state officials say the CSX agreement is the first critical step.

The key to the entire project is expansion of Long Bridge, an unglamorous but sturdy two-track bridge across the Potomac between Arlington and Washington. CSX owns the bridge and corridor, but the agreement will allow Virginia to build and own a parallel two-track bridge that already is under environmental review for construction just upriver from the existing crossing.

The new bridge will be devoted to passenger service, with a separate span for bicycles and pedestrians, allowing CSX to use the existing crossing solely for freight service that is critical to state commerce, especially to and from the Port of Virginia.

Under the plan, Virginia will build and own separate tracks for passenger service between Alexandria and L’Enfant Station in Washington. It also will build a rail bypass or flyover near Springfield and Franconia to allow passenger trains to cross from the east side of the rail line to the west to cross the new Long Bridge.

Virginia plans to build the project in three phases:

Dominion Energy CEO Tom Farrell and other business leaders in the Greater Washington Partnership say the announcement should lead to negotiation with other potential partners to further expand rail service among the jurisdictions in the region extending from Richmond to Baltimore.

Those partners could include Maryland, which they said could extend its MARC regional commuter rail service into Northern Virginia over the new Long Bridge.

“This is one of the biggest achievements for passenger rail in the United States since Amtrak was created almost 50 years ago,” Farrell and two other co-chairmen of the partnership’s regional mobility initiative said in a written statement.

“We commend Governor Northam and his team for their vision, leadership and execution of this historic effort.”

Passengers leave the train at rear, while an employee walks alongside a southbound Amtrak train at the Staples Mill station on Wednesday, Dec. 19, 2019.

A southbound Amtrak train was on the tracks Wednesday at the Staples Mill Road Station in Henrico County. Five regional trains currently serve the station, but only two stop at Main Street Station in Shockoe Bottom.