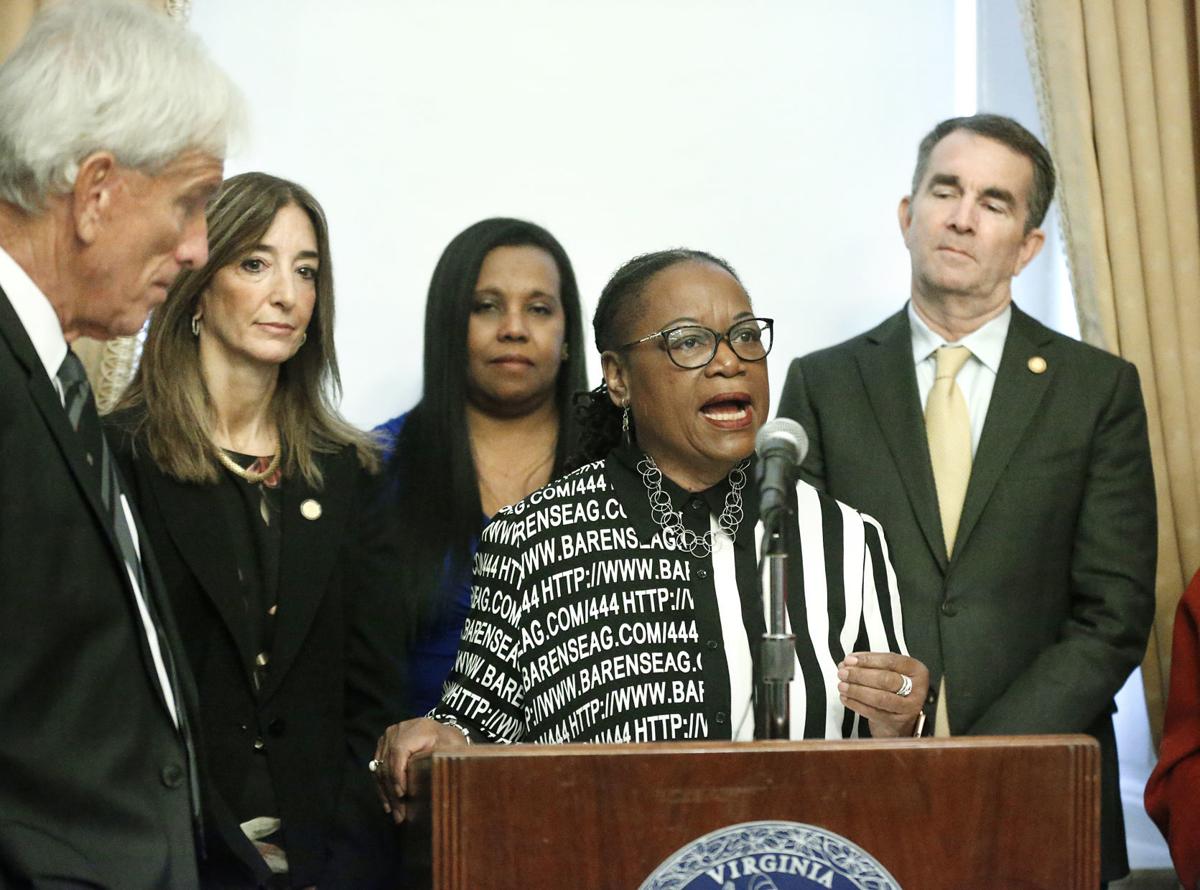 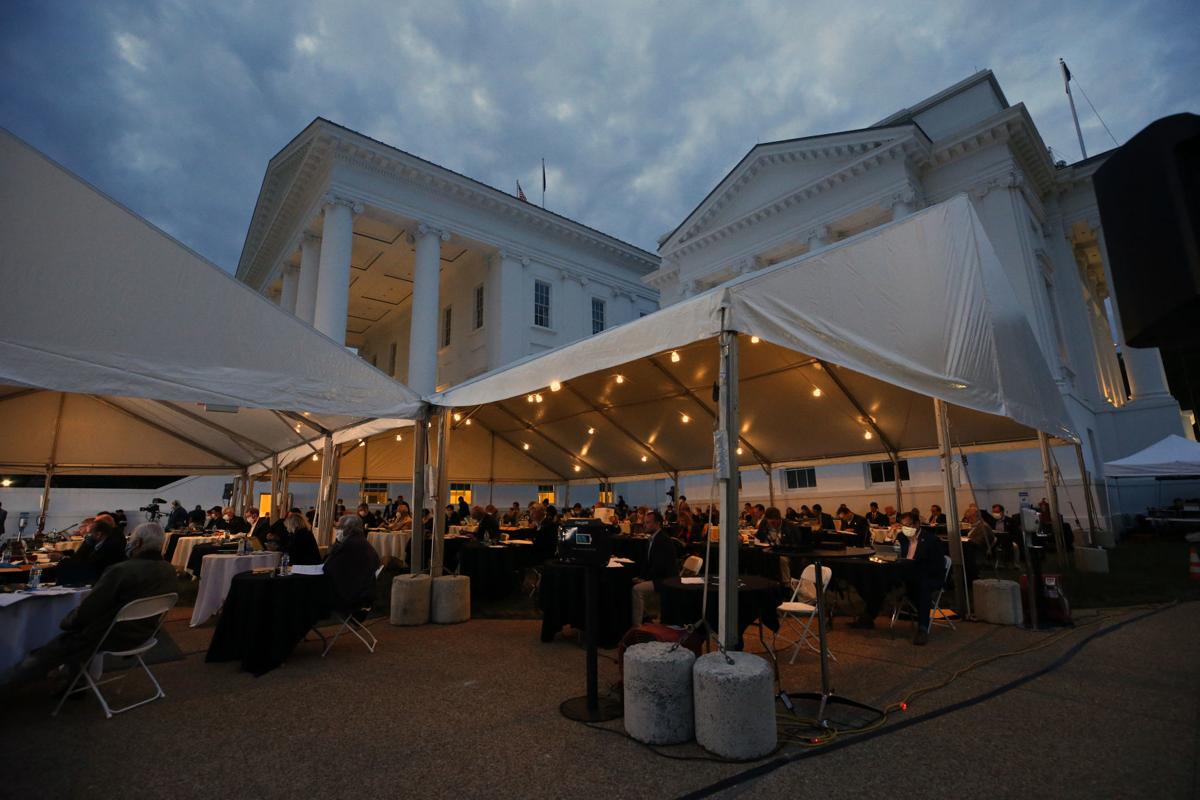 House of Delegates members went into the evening as they neared the end of the veto session at the state Capitol April 22. The House members were meeting outside in a tent instead of the House Chamber in order to practice social distancing due to the COVID-19 virus. 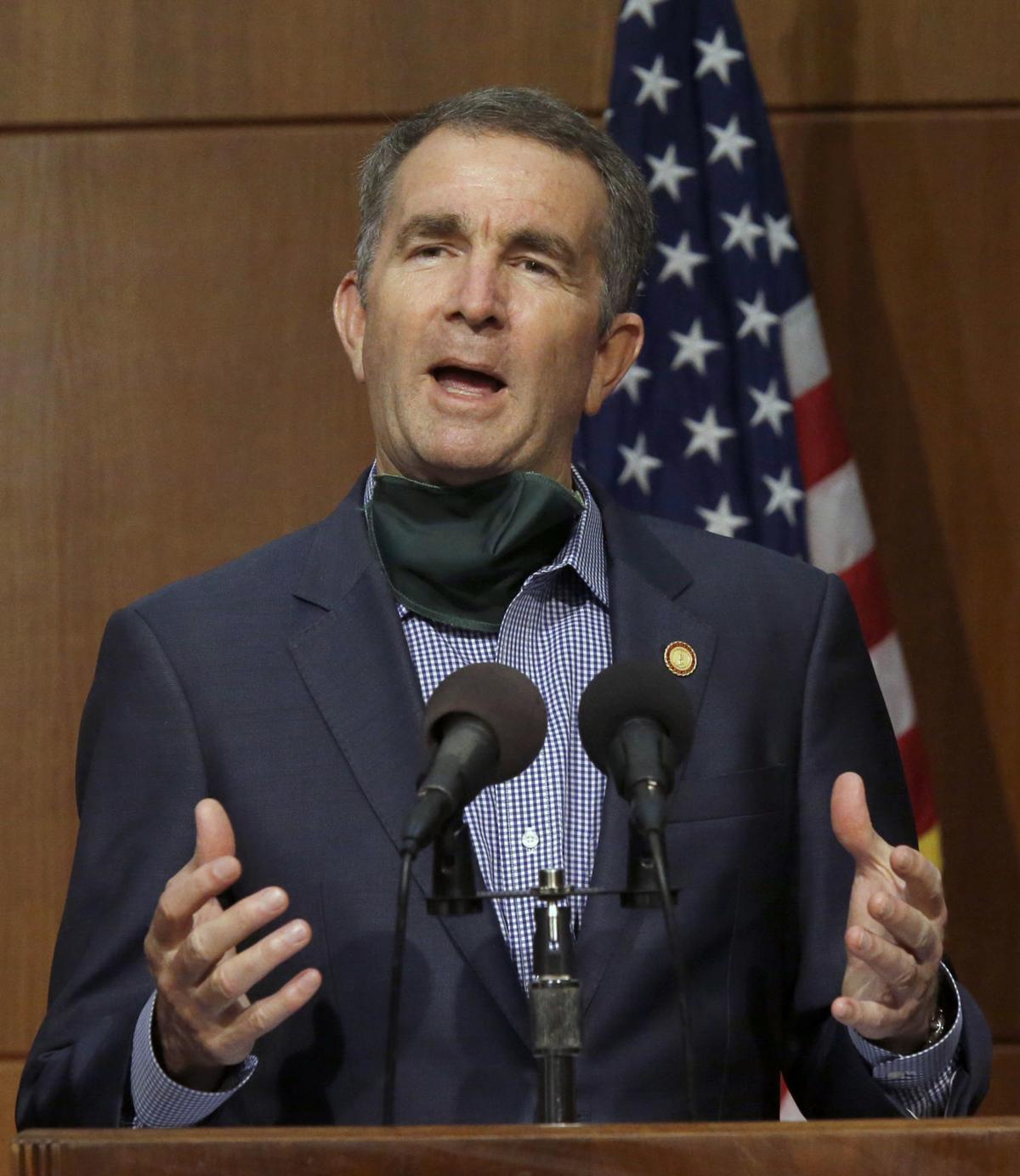 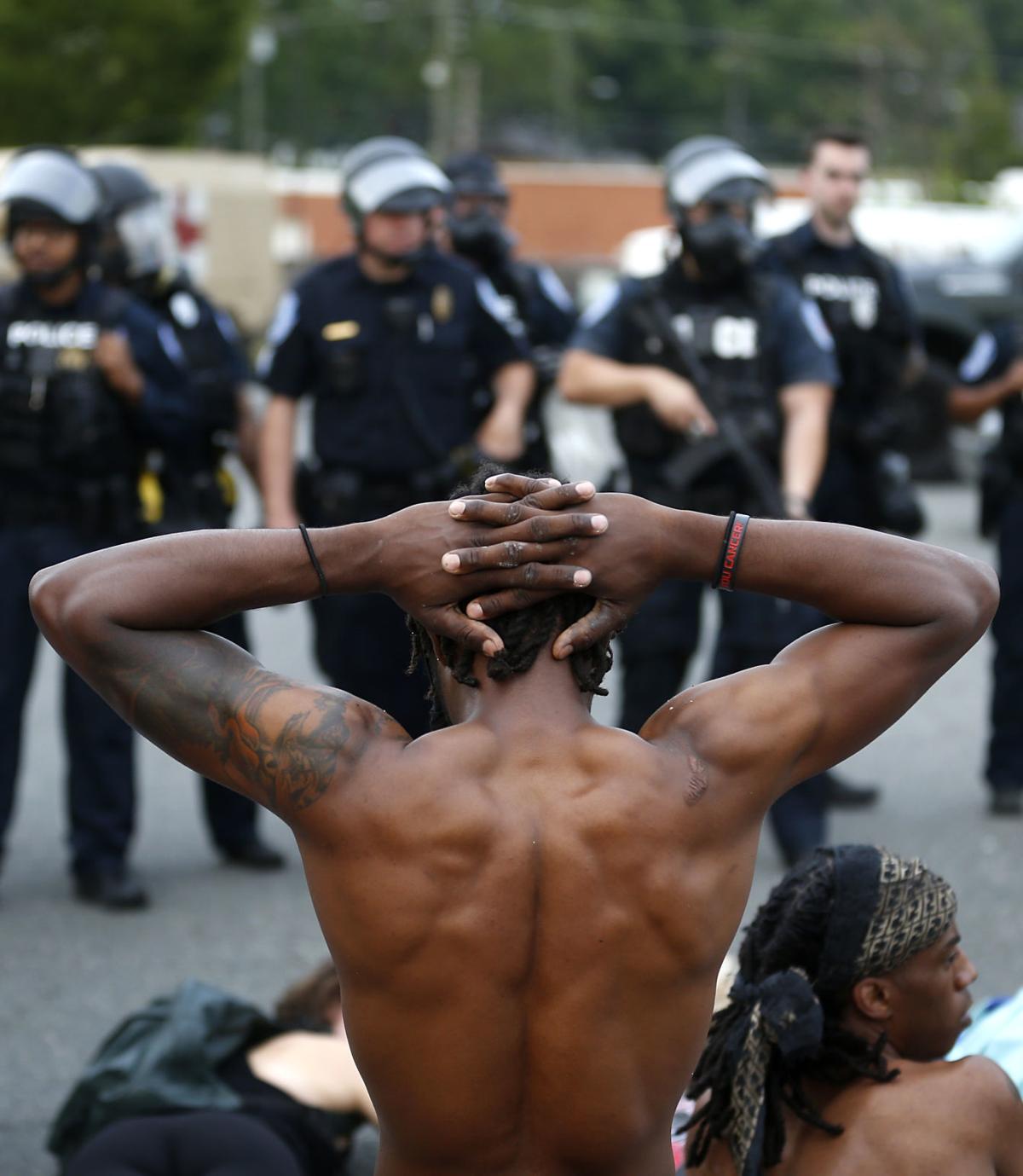 A protester knelt before a line of Richmond police officers at the department’s 4th Precinct on Chamberlayne Avenue on June 4.

The topic will be at the center of a special session Gov. Ralph Northam plans to convene in August, during which lawmakers will also discuss the impact of COVID-19 on the state’s budget.

Protests have swelled across Virginia, with marchers demanding an end to police brutality and racial injustice following the death of George Floyd at the hands of Minneapolis police. They have called for sweeping criminal justice reform, urging lawmakers at all levels of government to act swiftly.

Democrats in Virginia’s congressional delegation have backed the Justice in Policing Act, a federal bill that would ban the use of chokeholds by police and create a national database of use-of-force incidents, among other things.

Locally, elected leaders are discussing civilian review boards and an alert system that would mandate that mental health professionals be the first responders in a suspected or confirmed mental health crisis rather than law enforcement.

‘An urgency to provide relief’

Much of law enforcement comes down to policy at the state level, where Democrats face renewed urgency to deliver on campaign promises of criminal justice reform.

As lawmakers eye action during the special session, they are looking at banning chokeholds, boosting police training in excessive use of force, mandating citizen review boards to boost oversight of police misconduct, expanding avenues to fire or punish misbehaving officers, and rethinking the presence of police in schools.

“Black lives have always mattered to many of us, and we have been trying to deal with this issue for many, many, many years,” said Sen. Mamie Locke, D-Hampton. “It’s unfortunate that it has taken these high-profile murders to get even more people energized to want to take some policy initiative.”

Lawmakers in the House and Senate said addressing the issue during the special session, in what was supposed to be solely for adjusting the post-coronavirus budget, is a necessity.

“There is an urgency to provide relief from what many have seen as a racist criminal justice system and its application,” said House Majority Leader Charniele Herring, D-Alexandria.

Herring echoed comments from House Speaker Eileen Filler-Corn, D-Fairfax, who said Thursday that the special session would include action on police reform.

Republican leaders in both chambers have rejected calls from protesters to “defund” and “abolish” police departments.

Still, the Senate GOP caucus appeared receptive to some reforms.

He added that the caucus will also promote legislation to protect police officers who are assaulted during a state of emergency, and an amendment to the state’s new collective bargaining law to diminish a union’s power to protect officers “who don’t meet our high standards.”

Asked about the caucus’s position on some of the reforms floating from their Democratic counterpart, House GOP spokesman Garren Shipley said: “The caucus is still discussing the best way to move forward.”

Defunding or abolishing the country’s law enforcement system has been a key battle cry of protests across the nation, including here in Richmond.

Gov. Ralph Northam has said he supports addressing law enforcement reform during the session but that he does not support dismantling or defunding police departments. Northam said he hoped that funding already directed to law enforcement instead could be reprioritized toward areas of need, like more body-worn police cameras and community outreach.

“We need to talk about reform and the priorities of how we spend the funding,” Northam told reporters on Thursday. Notably, aside from increasing the use of body-worn cameras, Northam did not offer any specific policy suggestions to boost accountability within law enforcement, or punishment of officers found to have engaged in wrongdoing.

Asked about calls for defunding law enforcement, Herring said: “It’s time to look at the allocation of resources absolutely. We, of course, need to make sure communities are safe, but at the same time, the way we’ve been doing it has been backwards.” She specifically pointed to the incarceration of people with drug addictions and mental illnesses.

“People want to see us right that,” she said.

Sen. Jennifer McClellan, D-Richmond, said there is a need to systemically reframe public safety to address the struggles that lead to crime.

“The whole ‘defund the police’ conversation is ... do we need to be spending our money addressing the root causes and underlying problems that manifest in crime?” she said. “Because we haven’t been doing that. There’s an egregious lack of trust in the system to keep people safe.”

Senate Democrats have tapped a subgroup of their caucus to dive into the issue and make recommendations for the special session and the normal session that starts in January. Sen. Scott Surovell, D-Fairfax, the head of the group, said it has already received more than 60 ideas from members.

“The Floyd incident has caused a lot more people to look a lot more carefully at policing reforms,” Surovell said. “The pressure out there is significant, and I don’t think people are going to have a lot of patience with people continuing to say no or wait or let’s just study some things for another couple years.”

In the House, Majority Leader Herring said she is leading similar conversations about what reforms can be tackled during the August special session, and what may need to wait until January 2021.

Herring said she plans to introduce legislation mandating the creation of citizen review panels to examine excessive use of force by police. Herring said localities have the ability to establish those, but not all have plans to do so.

“Police officers should not be investigating themselves and their colleagues. That should be done by an outside source,” Herring said.

They said they would introduce legislation that would hold employers, including police departments and cities, responsible for “any harm caused by their employees when their actions arise out of an activity that was within the employee’s scope of employment, ordinary course of business or incident to their employment,” among other things.

“We want victims to be able to recover in the event of unnecessary uses of force, and we believe that if that option is there, it would certainly deter excessive uses of force in the line of duty when they’re not needed,” said Jones, who is exploring a run for attorney general in 2021.

“The most important thing is that we give victims or victims’ families the opportunity to recover monetarily when traditionally they have not been able to do so.”

Bourne and Jones also want proposals that would require more training in de-escalation and use of force.

Herring said House Democrats are also planning to introduce legislation allowing for the decertification of police officers who have been found to lack integrity, including by repeated instances of lying, as outlined in the 1963 Supreme Court decision in Brady v. Maryland.

In the upper chamber, Sen. Ghazala Hashmi, D-Chesterfield, said she would like to see the legislature ban the use of chokeholds across the state and establish community review boards, which many Richmond-area activists have called for.

Also in Hashmi’s legislative proposals is the cancellation of contracts for police to be stationed in schools. While Virginia does not require school resource officers in schools, more than half of the state’s public schools have a law enforcement presence.

At least one school system, Charlottesville Public Schools, has already announced that it’s doing away with school resource officers, following in the footsteps of education leaders in Minneapolis. The Richmond School Board is set to address the topic Monday.

“They are being called upon to discipline children. Disciplining children is not the same as responding as law enforcement officials to adult situations and crisis,” Hashmi said. “So when you have a child in crisis with a mental or emotional behavioral problem, the response ought not to be to bring in police, but to offer that child opportunities to address their situation through mental health counseling, through genuine counseling services.”

“We shouldn’t be asking police to play that role when we have other folks who should and ought to be in schools to handle those situations.”

Students of color in Virginia are disproportionately suspended, expelled and referred to police. The legislature has taken steps in recent years to address the issue, including measures that bar school divisions from suspending young students for more than three days, and another that cut the maximum length of a long-term suspension to 45 school days.

A 2015 investigation from the Center for Public Integrity, a Washington, D.C.-based nonprofit newsroom, found that Virginia is the worst state in the U.S. when it comes to what advocates call the school-to-prison pipeline. About 16 of every 1,000 students are referred to police and courts, and across the state, Virginia schools referred students to law enforcement nearly three times as often as the national rate.

The change would be a dramatic shift from what the legislature did in the wake of the 2018 Parkland, Fla., school shooting, when a special committee suggested hiring more school resource officers.

“I’ve been working on this issue for years, and I’ve never felt the sort of energy to take a look at that program as I have in the last few weeks,” said Amy Woolard, a policy expert with the Legal Aid Justice Center.

“When there is a school shooting, the state policy response has been to direct funding to SROs. At some point, we need to not have them in the building. So far in Virginia, there just hasn’t been the appetite to remove them entirely. There are people on both sides of the aisle that are comfortable with having police in our schools.”

Bills set to take effect July 1 revise the training standards for school resource officers, require school systems to review their agreements with law enforcement and mandate that the Department of Criminal Justice Services collect and publish data on incidents involving students and SROs.

A filing date for legislation for the special session has not been set, but lawmakers know there’s pressure to act.

“We have waited too long to address these issues,” Bourne said. “We’ve seen what happens by inaction, and we need to act now.”

House of Delegates members went into the evening as they neared the end of the veto session at the state Capitol April 22. The House members were meeting outside in a tent instead of the House Chamber in order to practice social distancing due to the COVID-19 virus.

A protester knelt before a line of Richmond police officers at the department’s 4th Precinct on Chamberlayne Avenue on June 4.