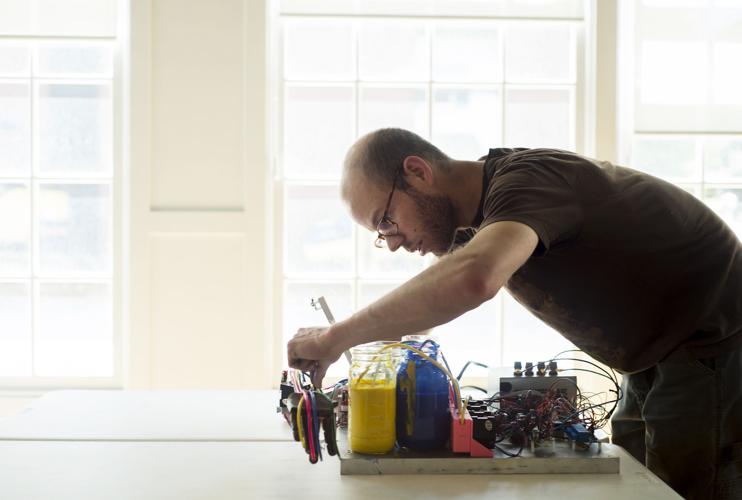 Adam Spontarelli, of Vector Space, installs a 3-D printed hand at the Academy Center of the Arts that will drip paint onto a canvas as the Community Market Hill City Keys piano is played. 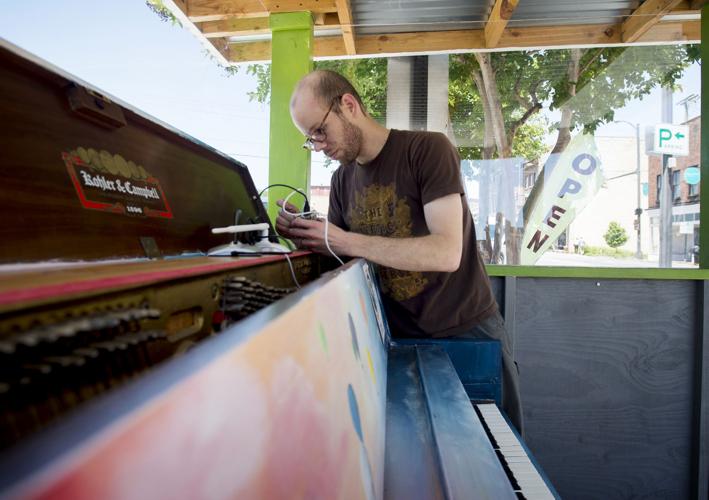 Adam Spontarelli, of Vector Space, installs the a microphone that will pick up the sounds the Community Market Hill City Keys piano is making and transmit the information to the Academy Center of the Arts, where a robotic arm will move and drop paint onto canvas according to the notes played.

By RACHAEL SMITH The News & Advance

In downtown Lynchburg, music is not only being heard from Community Market’s Hill City Keys piano — it’s being seen as well.

Over the past month, Vector Space co-founder and director of education Adam Spontarelli built a 3-D printed robotic arm to create what he calls piano art. The contraption made its debut Saturday.

Attached to the piano is a microphone that detects the notes played. That information is transmitted via Wi-Fi to a receiver at the Academy Center of the Arts down the street from the market.

The 3-D arm was created and programmed to move and drop paint onto canvas — according to the notes played.

“The piano will always be listening and recording what people are playing and transmitting that data to this robotic arm,” Spontarelli said. “These are all things that anyone could make.”

For example, if someone plays an “A” chord on any octave, the elbow of the arm will move clockwise and drop one of four colors (yellow, red, blue and green) on the canvas. If a “B” chord is played, the elbow will move counterclockwise.

“The pump draws the paint through the tubing and onto the canvas,” he said.

The project was funded by a $1,200 grant from the city’s Arts and Culture grant fund. Vector Space, based in downtown Lynchburg, is a nonprofit “makerspace” for people interested in so-called STEAM fields — science, technology, engineering, art and math — to collaborate, invent, discover and build the things that interest them.

Vector Space has been in talks with the Academy for more than a year trying to determine how to combine art and engineering.

Evan Smith, director of outreach at the Academy, said there are a lot of things coming out of STEAM in the city and that the piano art is a great opportunity for the two organizations to collaborate.

He added he hopes the Academy continues to work with Vector Space in the future on more projects.

“We’re excited to keep this going with them, and we’re happy to be able to do something this interesting over the summer,” he said.

Libby Fitzgerald, founder of Hill City Keys, said she doesn’t know much about the technological side of the project but that she is happy to see one of the seven pianos downtown being used for something different.

“All along I’ve been trying to come up with programming around the piano other than random people playing, which is great and I love it, but beyond that, what else can we do for programming?” she said.

She said the project adds to the usage of the pianos in a variety of ways.

“I can’t even conceive how this works, but I’m curious to see,” she said. “I’m fascinated to know how it will work and am happy as can be the pianos are being used for it.”

Spontarelli said he hopes the project will spark questions from residents about engineering and inventions.

“We’re trying to show that learning and being creative and doing challenging and ambitious things is rewarding and worthwhile,” he said. “The point of this project is to get people interested in these things.”

He is encouraging people to sit down at the piano and play a song and then pull up their phone and watch the robotic arm on a livestream that Vector Space has set up on its blog, then go down to the Academy and see what they have created.

Although he has tested the project at his home, Spontarelli admitted that he was not sure what would happen after it’s set up for everyone to use.

The piano art project will run through the summer into September. It's open to the public daily at the Lynchburg Community Market and from 9 a.m. to 5 p.m. Monday through Friday at the Academy Center of the Arts.

Authorities in Virginia say the 17-year-old daughter of Toronto Blue Jays first base coach Mark Budzinski died in a tubing accident in Richmond over the weekend. A spokesperson for the Department of Wildlife Resources says Julia Budzinski was one of two girls who fell off a tube being pulled behind a boat on the James River on Saturday. As the boat operator returned to get the girls out of the water, the boat hit a wave. That caused it to be pushed on top of Budzinski and striking her with the propeller. Budzinski was a rising senior at Glen Allen High School who played soccer and other sports.

Police say a child is dead and another person is injured after multiple shootings at a party in central Virginia. Local news outlets report officers were called to an event venue in suburban Richmond on Saturday night for a report of a shooting. Upon their arrival, officers found a juvenile male who had been shot in a bathroom. Chesterfield County Police said in a news release Sunday that the child was pronounced dead at the scene. Another shooting occurred when a sheriff's deputy who was providing security at the event responded to the shooting, encountered a person with a gun and shot the person. That individual was taken to a hospital with injured not considered life-threatening.

Play tells story of filling in pools rather than integrating

LYNCHBURG, Va. (AP) — As American citizens celebrated freedom and liberty in their nation on Independence Day, 1961, a government founded on n…

Two women have been found dead and a retired police department employee has been charged with second-degree murder in their killings following a lengthy weekend standoff. Henrico County police say the incident began Saturday afternoon with a reported shooting at a home. Arriving officers heard gunfire, and two men fled the scene. Police say a man later identified as Richard Colon Crowder was taken into custody after he exited the home and then two women were found dead inside. Crowder is being held without bond. The police department identified him as a retired employee without specifying his role. It wasn’t clear if he had an attorney.

A last-minute amendment to Virginia's budget has blocked the planned release this summer of hundreds of inmates. The change affected the state's earned sentence credit program, which was expanded in 2020. It allows inmates to shave off some time from their sentences for good behavior. Inmates could not apply the expanded credits toward a sentence for a violent crime but could benefit if they also had a lower-level offense. The budget amendment reigns in who can qualify. Relatives and other advocates for the affected incarcerated people said the last-minute reversal cruelly upended reunion and homecoming plans, devastating families and the inmates.

VEC to resume trying to collect about $860M in overpayments

The Virginia Employment Commission is resuming efforts to collect what it says is nearly $860 million in overpayments that went to hundreds of thousands of out-of-work residents. The agency announced its intentions Friday, just after an overpayment waiver provision the General Assembly enacted in 2021 expired. During the waiver period, VEC approved 23,310 overpayment waivers, forgiving over $80 million in payments for eligible customers who did not commit fraud and were overpaid through no fault of their own. That's according to an agency news release. Customers who have been overpaid should look out for an “overpayment billing statement.”

Authorities say a 12-year-old boy who went missing while swimming off the coast of Virginia Beach has been found dead. Local news outlets report boats, divers and at least one helicopter assisted in the effort to find the child, who was last seen by his family in the water around 10:30 a.m. Sunday. The Virginia Marine Resources Commission and U.S. Coast Guard were involved in the search. According to Virginia Beach police, the child was found in the water shortly before 1:30 p.m. and pronounced dead. The department said he had been visiting the city with his family for the holiday weekend.

Most of the legislation passed earlier this year by the divided Virginia General Assembly and signed into law by Republican Gov. Glenn Youngkin will take effect Friday. That includes measures that lifted a sweeping ban on facial recognition technology, expanded hunting on public lands, and added a new criminal penalty for marijuana possession. Another new law toughens the penalty for stealing catalytic converters. The emission control devices have become popular targets for thieves as prices for the precious metals they contain have skyrocketed. The legislation makes tampering with or stealing a catalytic converter a felony punishable by up to five years in prison. It was previously a misdemeanor. New Virginia laws typically take effect July 1, unless otherwise specified.

Adam Spontarelli, of Vector Space, installs a 3-D printed hand at the Academy Center of the Arts that will drip paint onto a canvas as the Community Market Hill City Keys piano is played.

Adam Spontarelli, of Vector Space, installs the a microphone that will pick up the sounds the Community Market Hill City Keys piano is making and transmit the information to the Academy Center of the Arts, where a robotic arm will move and drop paint onto canvas according to the notes played.