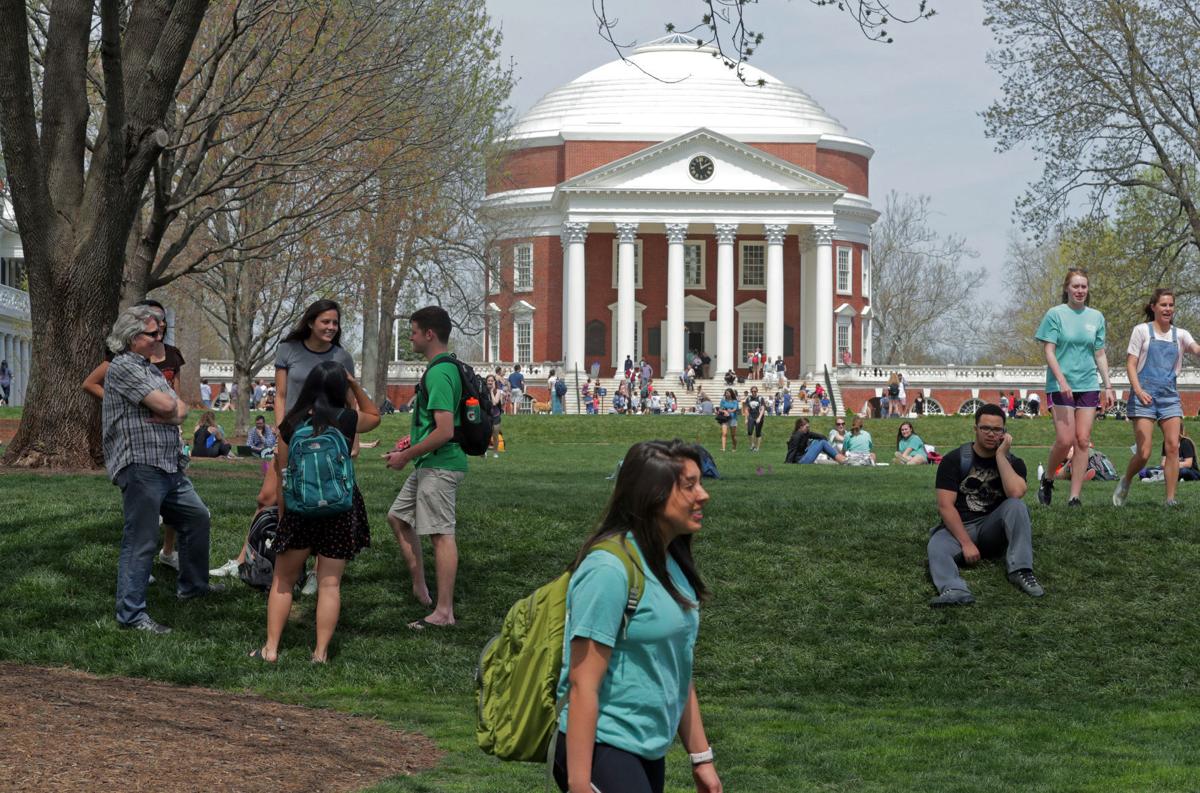 In September 2018, UVA students took advantage of warm temperatures and congregated near The Rotunda. COVID-19 stunted the spring 2020 semester and is complicating future plans for colleges across the commonwealth.

On Monday, the presidents of Virginia’s 14 taxpayer-financed colleges and universities met by conference call to brainstorm and swap intel on the continuing impact of COVID-19. The virus stunted the spring semester and will remake the academic year ahead.

The conversation, like many among the presidents, was — pun intended — collegial. It did not, however, touch on fresh friction among the schools: how to fill incoming classes when the economic whiplash caused by the pandemic has students rethinking higher education because they don’t have the money to pay for it.

The tension could be traced to an email four days earlier by Juan Espinoza, director of undergraduate admissions at Virginia Tech, to his counterparts at the 13 other public, four-year institutions. He told them Tech was having difficulty assembling the new class; specifically with foreign students who pay top dollar to attend.

Having received deposits from roughly 150 overseas students — well short of the target of 550 — Tech would close the gap by, among other things, offering seats to 950 in-state students on the university’s waiting list, Espinoza said.

In other words, Virginia Tech, which as part of its big-is-better strategy over-enrolled last year by 1,000, would attempt to snatch students planning to matriculate elsewhere — often nearby Radford University and 140 miles up the Blue Ridge, James Madison University, in Harrisonburg — because it was unlikely they would land in Blacksburg.

“Again, these [in-state] offers will help cover the significant shortfall in international,” he said. “Sorry for the impact this will have, but this action is needed to get us to our overall goal.”

In Virginia higher education, the big dogs — Virginia Tech, the University of Virginia and the College of William & Mary, all elite, in-demand schools — eat first.

That can mean, especially in lean times and as the pool of college-bound kids flattens out and heads toward a projected decline, there’s even less for second-tier schools: fewer students, fewer dollars. The latter, even in fat times, is a source of consternation for these institutions.

James Madison, the lowest-funded public university on an in-state, per-student basis, tried to mobilize alumni this year to lobby the General Assembly to be more generous.

Tech, UVA and William & Mary came up with their own way: budget fine print allowing them to get around enrollment caps on non-Virginia students — those who pay premium to attend — to train them for high-demand fields. The increase in out-of-staters would be modest — 1% from the prior year.

The uncertainty on enrollment caused by the coronavirus is accompanied by the certainty of austerity. The calendar augurs both.

The deadline for students to commit to their fall destination typically is early May. Several schools, from ginormous George Mason University to little Longwood University, are giving prospects until June to figure out where they’ll go and how to pay for it.

There is evidence high school graduates might be ducking those decisions, possibly delaying college altogether. The National Association of Student Financial Aid Administrators, citing research by the National College Attainment Network, reports a decline in all 50 states in applications for federal assistance, beginning in mid-March, when the epidemic’s economic toll accelerated.

Plus, this summer could bring more bad news — and just in time for the start of the academic year.

The General Assembly is expected to return, possibly in August or September, to rewrite with Gov. Ralph Northam a state budget decimated by COVID-19. Sheltering education spending could give way to deep cuts. All the more reason higher ed wants to pin down enrollment sooner than later.

That’s why Tech’s reach into the in-state market — it routinely has done this other years and, through spokeswoman Tracy Vosburgh, said it expects a low acceptance rate this year — is getting attention: It puts students out of reach of other schools.

Peter Blake, director of the State Council of Higher Education for Virginia, the agency that monitors curriculum and policy, describes the scramble for students as a consequence of a “cascading and interlocking competitive pool.”

The financial threat of the coronavirus is not confined to the classroom.

Virginia Tech and UVA have huge, lucrative athletic programs — Tech, about $51 million; Virginia, $26 million just through football — that will be considerably less so with no fans in the stands. UVA lost $85 million at its hospital because of the freeze on elective surgery to save beds for virus patients.

For higher education, getting through the pandemic is one thing. Solving the problems exacerbated by it is another.

A possible remedy is to allow Virginia Tech, UVA and William & Mary to do as other many high-end state schools elsewhere do: accept more out-of-state students who pay more, freeing more money in the budget for other public colleges and universities.

But Democrats waited too long to take back the legislature to give up that kind of power.

ROANOKE, Va. (AP) — Police in Virginia say that a body found in the Roanoke River belonged to a man who was seen swept away by high water late…

ATLANTA (AP) — The winning numbers in Tuesday evening's drawing of the "Mega Millions" game were:

Virginia State Police are phasing out sedans for SUVs

RICHMOND, Va. (AP) — Virginia State Police are phasing out their familiar silver-gray-and-blue police sedans and will transition to Ford Inter…

STANLEY, Va. (AP) — A police officer in a Virginia town was shot and killed by a driver during a traffic stop before he could get out of his p…

Va. man accused of assault on officers at Capitol attack

In September 2018, UVA students took advantage of warm temperatures and congregated near The Rotunda. COVID-19 stunted the spring 2020 semester and is complicating future plans for colleges across the commonwealth.