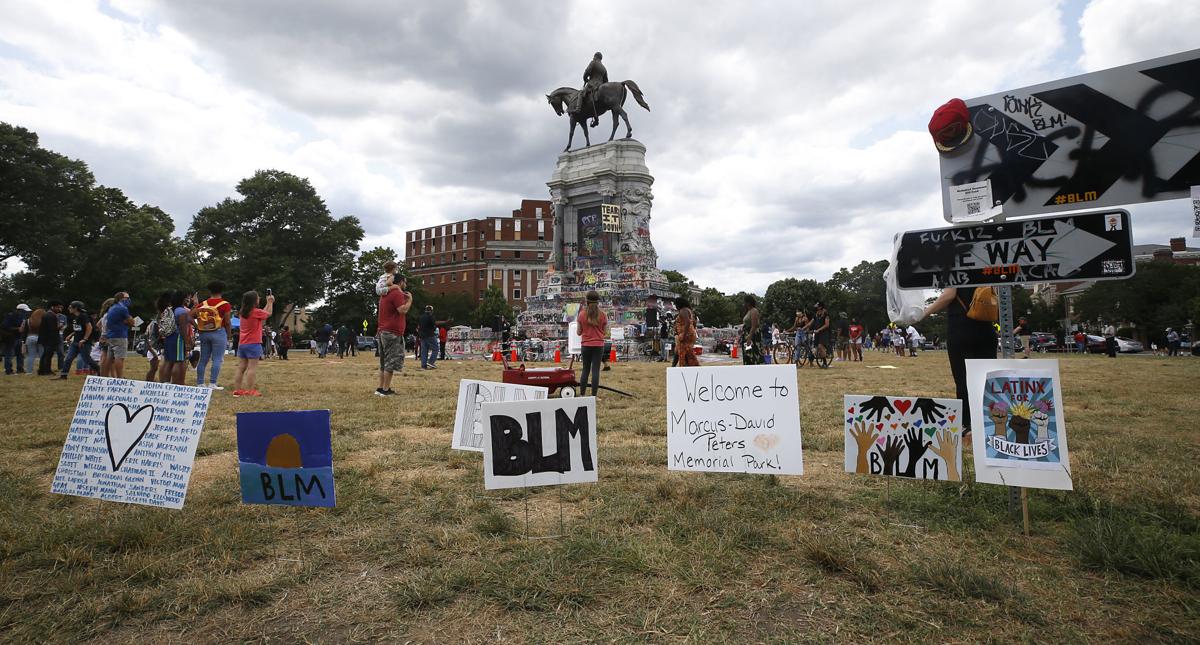 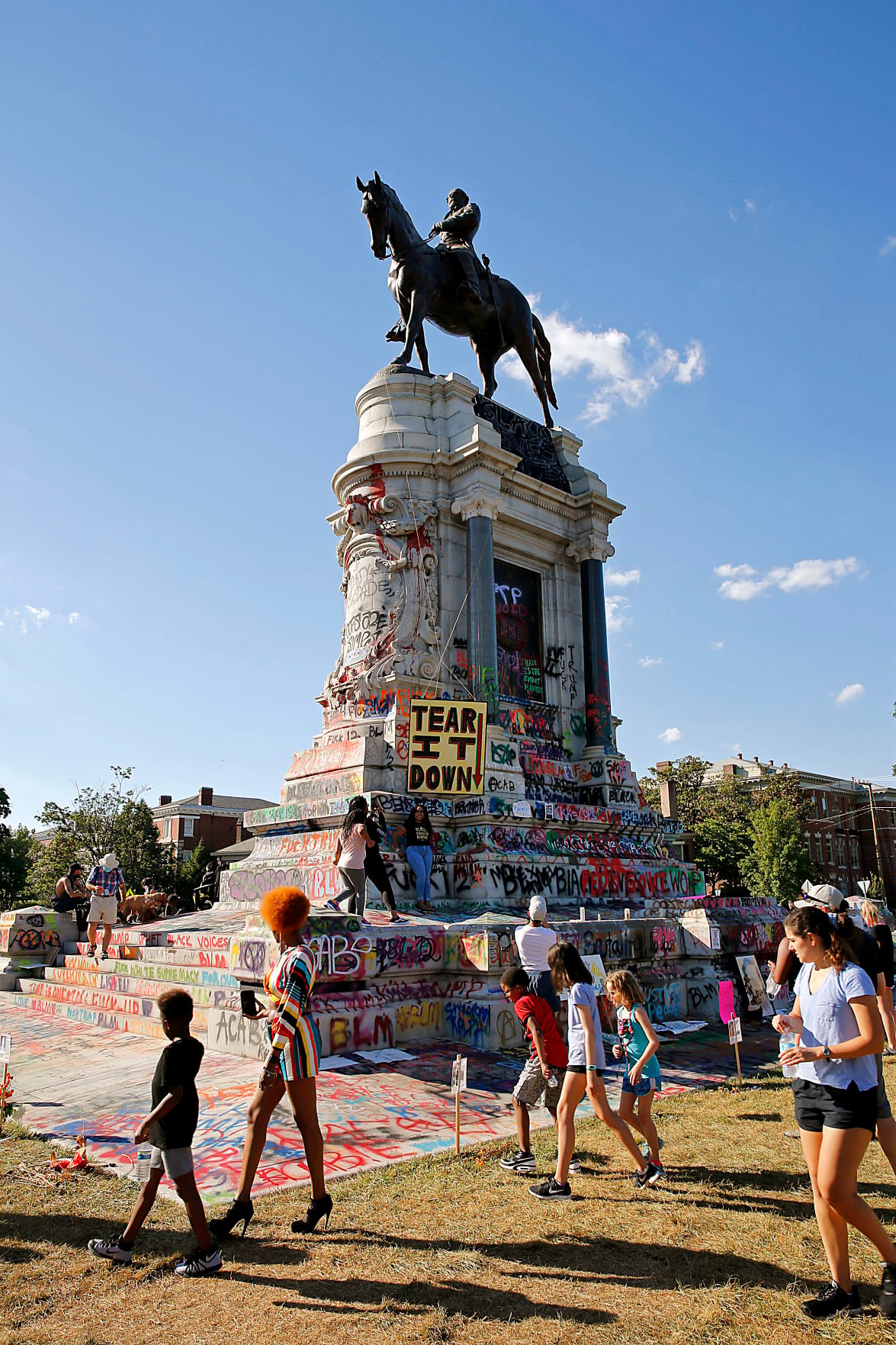 The Lee statue on Monument Avenue was built in France and unveiled in May 1890. It is under state control.

Virginia will have to continue to hold off on taking down the Robert E. Lee statue on Richmond’s Monument Avenue.

A Richmond judge on Thursday extended indefinitely an injunction barring the state from removing the statue, the most well-known Confederate symbol in the former capital of the Confederacy.

The statue has received increased scrutiny in the three weeks of protests in Richmond over police brutality and racial injustice.

“Well, the state seems to think that the monument is the property of the governor,” said Circuit Judge Bradley B. Cavedo, according to a transcript of the hearing.

“My view is that the monument is the property of the people of the commonwealth and that the governor is more of a custodian or fiduciary on their behalf.”

Referring to plaintiff William C. Gregory, the judge added: “Mr. Gregory is a citizen of the commonwealth,” and “until someone proves otherwise to me, he is a part owner of the monument.” Cavedo has set another hearing in the case for July 23.

Gov. Ralph Northam ordered on June 4 that the Department of General Services remove the statue “as soon as possible.” While state employees inspected the 130-year-old statue in preparation for its removal, Cavedo issued a temporary injunction on June 8 that barred the state from removing it.

Thursday’s ruling and the June 8 injunction came in response to a lawsuit filed by Gregory, the great-grandson of two signatories of the 1890 deed that transferred ownership of the land for the statue over to the state.

The lawsuit argues that under the terms of the agreement and a legislature-approved resolution, the state is supposed to consider the monument and the area around it “perpetually sacred” and “faithfully guard it and affectionately protect it.”

Joseph Blackburn Jr., one of Gregory’s lawyers, said during the hearing: “The commonwealth must honor its contracts like anyone else.”

Cavedo granted Attorney General Mark Herring’s motion to dismiss the complaint because of lack of standing, but gave Gregory’s lawyers 21 days to file a new complaint. “Standing” refers to the ability of a party in a case to demonstrate a stake in the outcome.

“I want Mr. Blackburn to have another shot at it,” Cavedo said.

Northam spokeswoman Alena Yarmosky said the administration is pleased with the judge dismissing the lawsuit but disappointed by the injunction’s extension.

“We are evaluating the specific next steps, but make no mistake — this statue will be removed,” she said.

Herring, who attended Thursday’s hearing, said afterward that he was disappointed by the extension, but felt confident that the judge would also dismiss the amended complaint.

“The governor is well within his rights to direct that the statue come down and it should come down,” Herring said.

Carl Tobias, a law professor at the University of Richmond, said the Virginia Supreme Court is likely to have the final say in the case “because the losing party in the Circuit Court will appeal.”

“It is difficult to understand why Judge Cavedo indefinitely extended the injunction, because the requirements for doing so set a high bar,” Tobias said. “Plaintiffs did not appear to meet those requirements, as meticulously shown by the Attorney General’s brief.”

That brief, filed Tuesday, argued that the 1890 deed does not prevent the governor from removing the statue or entitle Gregory to an injunction.

“The only question is whether a single plaintiff may call upon the equitable powers of this court and use 130-year-old documents and inapplicable doctrines of property law to countermand the governor’s decision. He cannot,” Herring’s brief said.

In Cavedo’s initial 10-day injunction, he wrote that it was in the public interest to delay any action until the resolution of the lawsuit.

Two other lawsuits challenging the planned removal have been filed, including one by six Monument Avenue residents who said removing statues on the street would decrease property values and hurt tax incentives. The statue is in a federally recognized historic district.

While some residents object to the removal, the neighborhood association said in a statement last week that it supports getting rid of the Lee statue and others.

“For too long, we have overlooked the inherent racism of these monuments, and for too long we have allowed the grandeur of the architecture to blind us to the insult of glorifying men for their roles in fighting to perpetuate the inhumanity of slavery,” said the Monument Avenue Preservation Society’s board of directors.

All nine members of the Richmond City Council have said they support removing the four other Confederate statues on the street. One, Jefferson Davis, was pulled down by protesters last week. The city can’t take down those symbols until a new state law takes effect July 1, giving localities control of war memorials.

The Lee statue, built in France and unveiled in May 1890 in front of roughly 150,000 people, is under state control.

Since Northam’s June 4 announcement, the Lee statue has served as a rallying point for protesters and community members who have gathered around it and marveled at the graffiti that now covers much of the pedestal the statue stands on.

Concrete barriers surround the Lee circle, installed by the Department of General Services on Wednesday in preparation for the statue’s removal. Those barriers remained Thursday, with the future of the statue still unclear.

Only three members of the news media were allowed inside the Richmond courtroom where Cavedo heard the case. Press members, including a Richmond Times-Dispatch reporter, were seated inside the courtroom shortly before the hearing was scheduled to start. A sheriff’s deputy then asked everyone in the courtroom, which had a capacity of 60 people, to leave the room, citing COVID-19 restrictions.

Lawyers in the case were allowed inside, along with three members of the media selected by other members of the press corps. The three were Sarah Rankin of The Associated Press, Brad Kutner of Courthouse News and Henry Graff of NBC12.

“As much as possible, cases like this need to be done in open court with the press allowed to observe,” Herring said after the hearing. “This is a case that is of great importance to the people of Virginia so I’m hopeful that any other future proceedings will be held in a setting in which members of the press are able to fully observe.”

The sheriff’s deputy declined to open the doors of the courtroom so others could hear the arguments from the hallway.

The Lee statue on Monument Avenue was built in France and unveiled in May 1890. It is under state control.