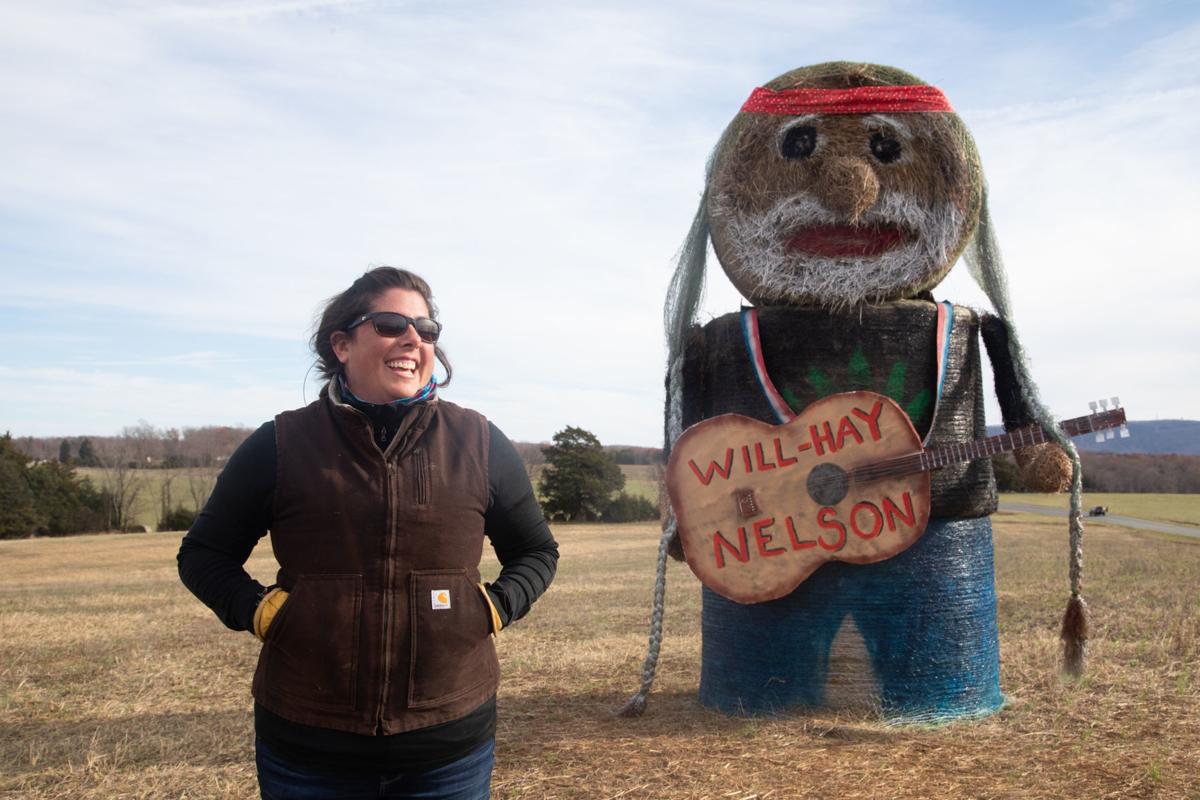 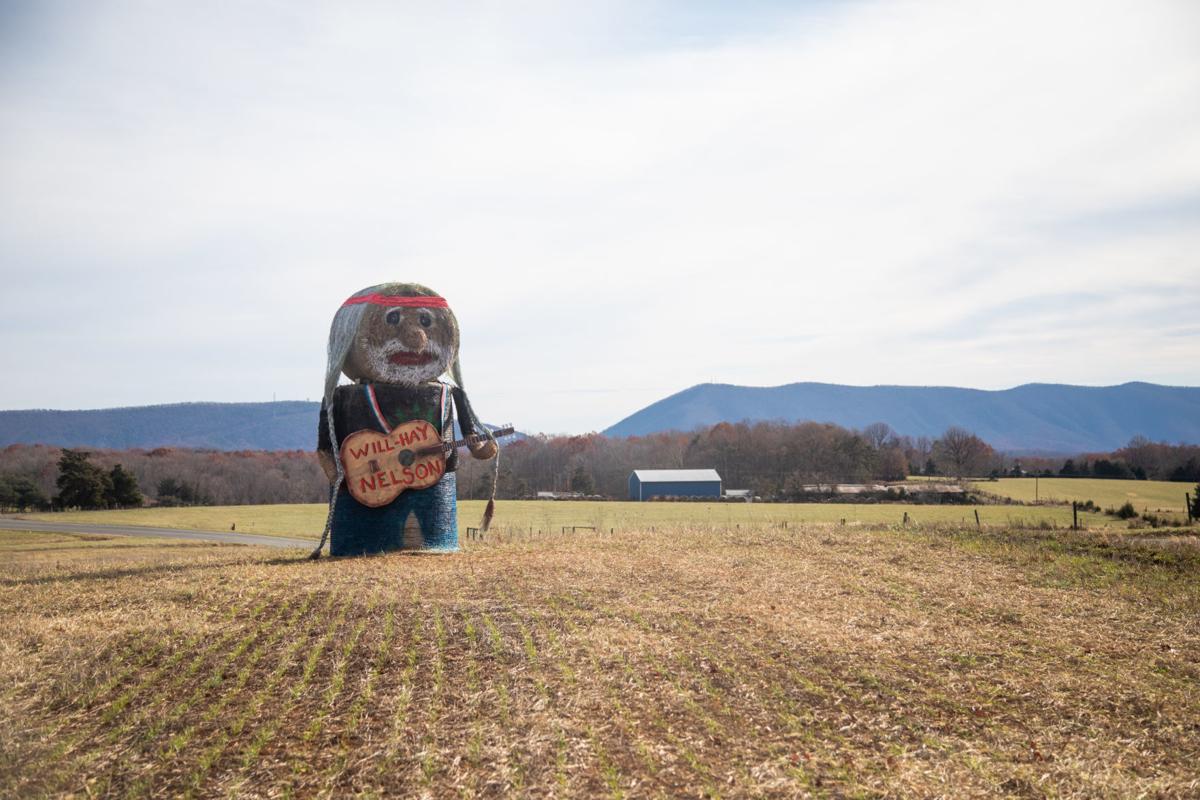 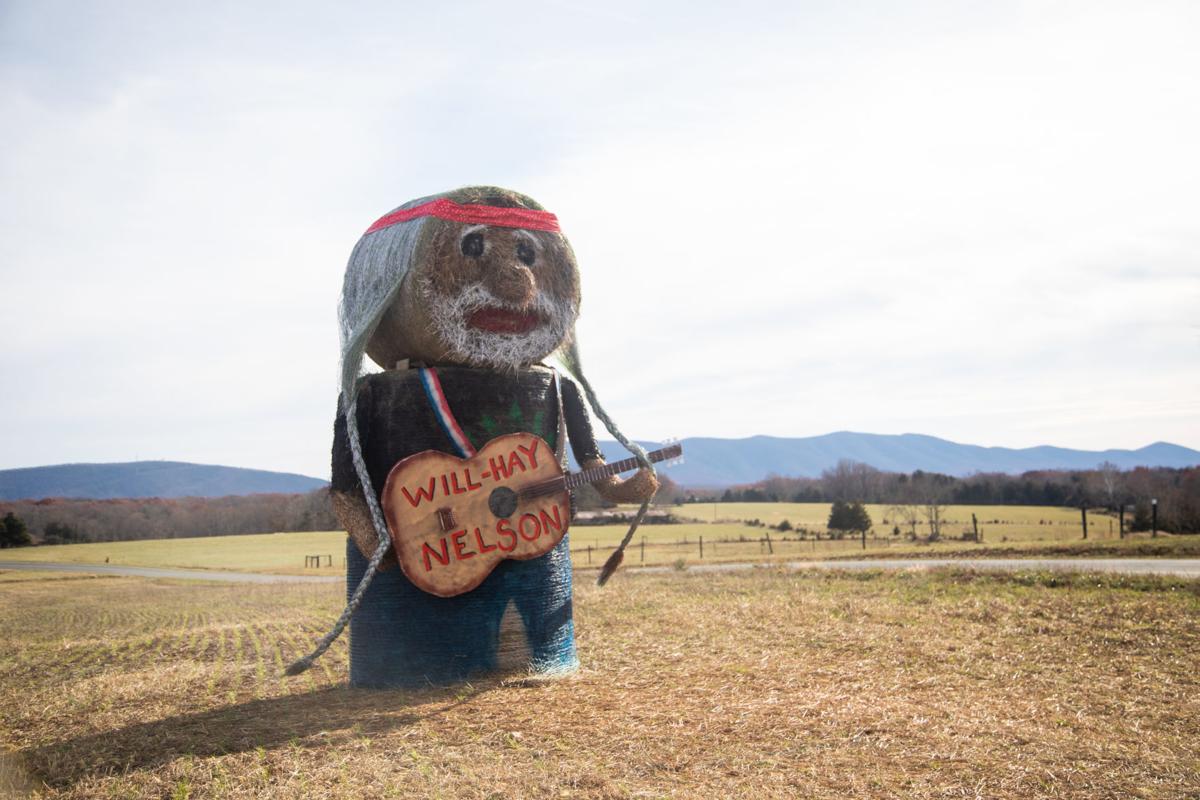 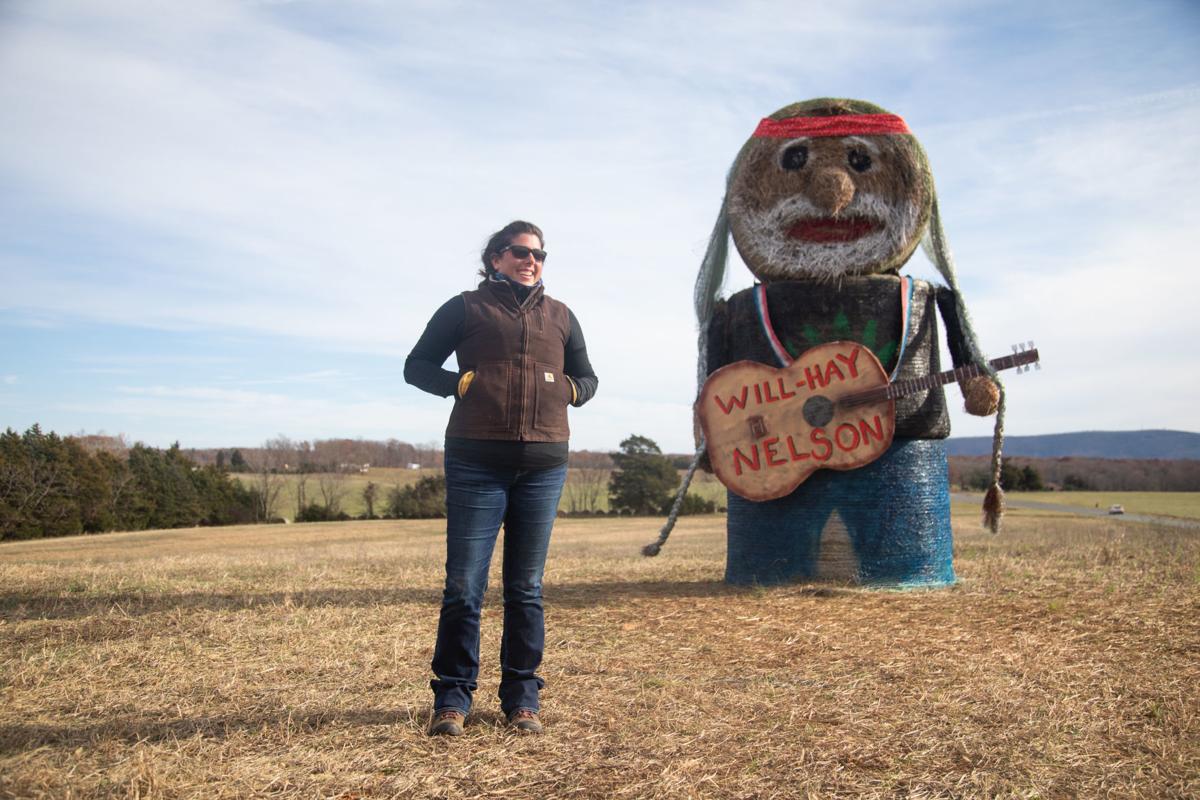 BY SHANNON KEITH The News & Advance

HUDDLESTON — Even though Willie Nelson probably is not the first name people associate with the holidays, a 15-foot-tall hay sculpture of the country music singer this year is center stage of an annual holiday tradition in Huddleston.

For the past eight years, Huddleston native Beth Bays has debuted a new hay bale creation in late November or early December at her farm on Tolers Ferry Road. Past creations include characters from "The Wizard of Oz;" a drummer bear; a cow; an elephant; the Virginia Tech Hokie bird; and characters from "Rudolph the Red-Nosed Reindeer."

However, this year's creation — "Will-Hay Nelson" — has struck a chord in the community, Bays said.

"This one seems to be everyone's favorite by far," Bays said. "My cousin joked that I might have to quit now because I'll never be able to top this."

"They needed more entries and asked me if I would do one," Bays said. "My husband didn't know what in the world I was doing but I managed to get one together."

Even though the contest ended after a few years, Bays said she continued creating new sculptures each year because people in Huddleston enjoyed them.

"It just became an annual thing," Bays said. "It was something I wanted to keep doing for the community."

Bays said coming up with a new idea each year is the hardest part of her annual project.

"That's the thing I struggle with every year," she said. "I rack my brain until something just comes to me."

Bays said even though the hay bale sculptures are created for the community, they also require a community effort to construct.

"I couldn't do this without my friends helping me out," she said. "It really is a community effort."

Huddleston resident Frank King has been helping Bays create the sculptures for the past eight years.

"Beth does all of the heavy lifting," King said. "She comes in and stacks the bales with a John Deere tractor and makes it look easy. It's like she's stacking Legos or something."

Bays said Will-Hay Nelson was easier to assemble that some of her past sculptures but was more difficult in terms of details.

"The basic shape was easy and only took three bales to do," Bays said. "However, there was a lot of detail work with sculpting the arms out of chicken wire and making the guitar from a huge piece of Styrofoam I came across a few years ago and saved in my barn. I also had to make a nose out of chicken wire because Willie has a very prominent nose and I wanted to get that right."

King said even though Will-Hay Nelson is not holiday themed, many people have come and taken their family Christmas photo with the sculpture.

"It's become a tradition around here," King said. "A lot of people do family photos with whatever is out here each year."

During a visit by The News & Advance to the farm on Dec. 3, more than a dozen people driving by the sculpture honked their horns, waved, or shouted their appreciation to Bays. Several even stopped to talk with her about Will-Hay Nelson.

Elkton resident Don Williams said even though he has seen all of the hay bale creations each year when he travels to his Smith Mountain Lake vacation home, he wanted to stop this year to meet Bays.

"This is my favorite one so far," Williams said. "I could tell it was Willie Nelson from all the way down the road. I just had to stop to tell her how much I enjoy seeing these each year."

Bays said other residents that stop at the sculptures when she is not out there often leave notes of appreciation pinned to the hay bales.

"I get a lot of notes each year thanking me for doing this," Bays said. "Some people have even left me little gifts. It's really nice to know people appreciate what I'm doing."

Will-Hay Nelson also is getting plenty of attention outside Huddleston as well. Since its debut on Nov. 26, a Facebook post of the sculpture has gone viral, getting hundreds of shares and tens of thousands of views. A brief article about the sculpture also has been featured on multiple internet news sites, including one in New Zealand.

"That's amazing that word has spread that far so fast," Bays said. "I'm hoping the real Willie Nelson sees it and stops by the farm. I would love that."

Bays said Nelson would have fit right in on Dec. 8, during another annual tradition in Huddleston associated with her sculptures.

"Every year we do a music video out here and sing songs related to whatever sculpture we did," Bays said. "We have been getting some pretty big crowds the last few years and we have a lot of fun."

Local musician Dave Owens has written songs for the sculptures almost every year since Bays began her annual project, modifying the lyrics to well-known songs to fit that year's creation.

"I've had a lot of fun with this," Owens said. "One year I switched up the lyrics to the bluegrass song 'Milk Cow Blues' when Beth did a cow and the year she did 'The Wizard of Oz' we did a different version of 'Over the Rainbow.'"

Owens said this year, he switched up the lyrics for one of Nelson's songs for the community event.

"I changed 'On the Road Again' to 'On the Farm Again,'" Owens said laughing. "It's always a good time."

Will-Hay Nelson On The Farm Again