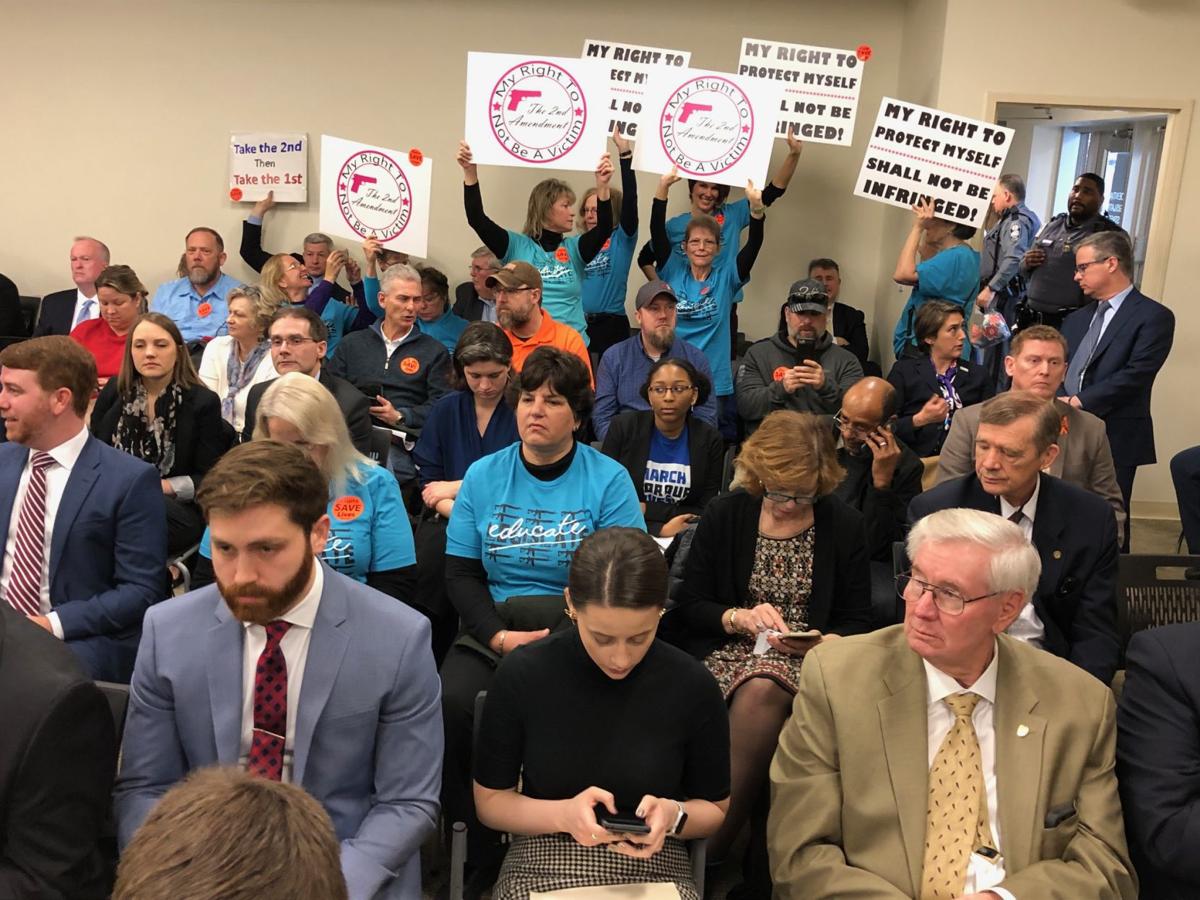 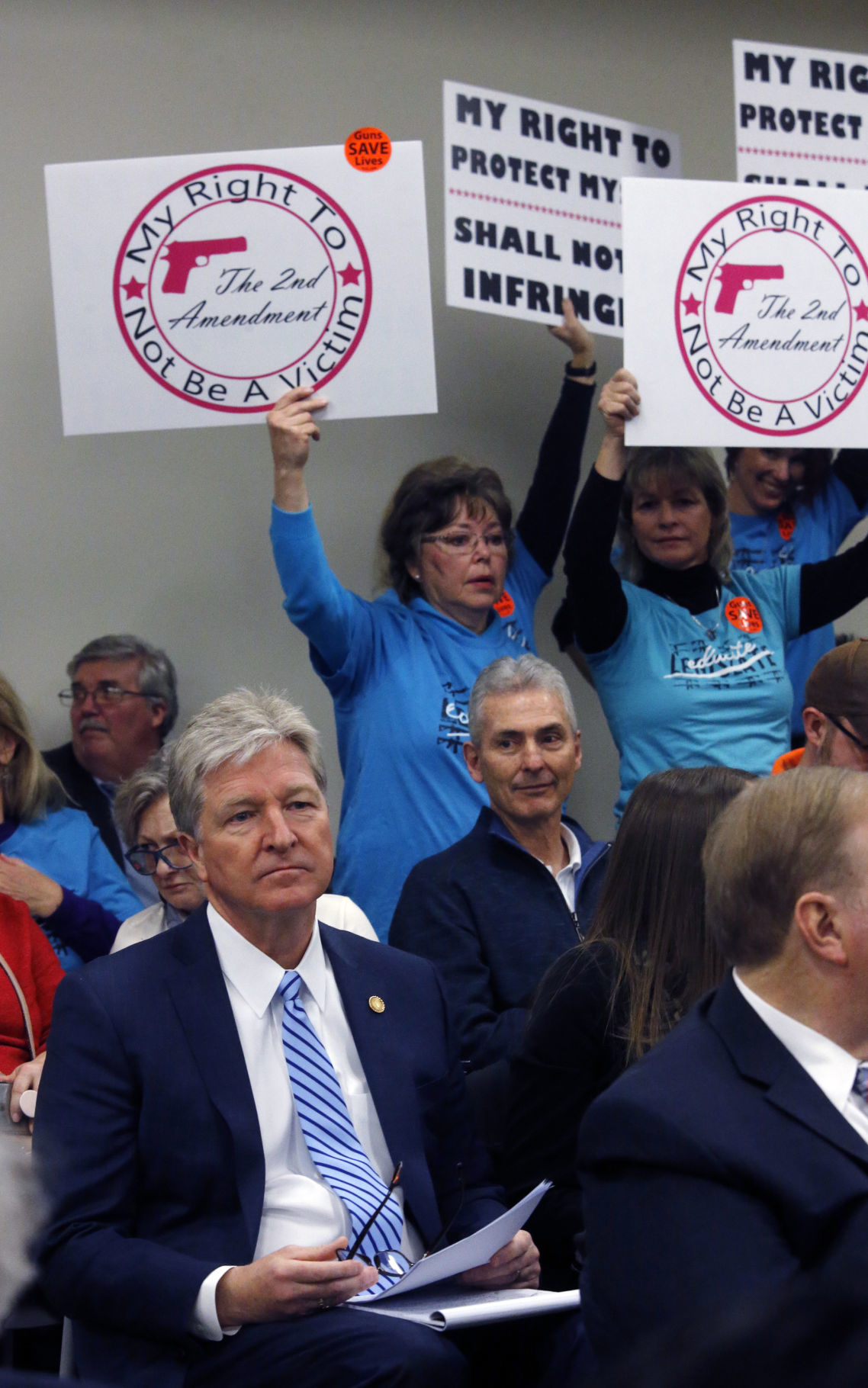 Secretary of Public Safety and Homeland Security Brian Moran (left) waited Monday to speak before the Senate Judiciary Committee on the assault weapons ban. It voted 10-5 to kick the bill to next year’s session, calling for a study by the Virginia State Crime Commission. 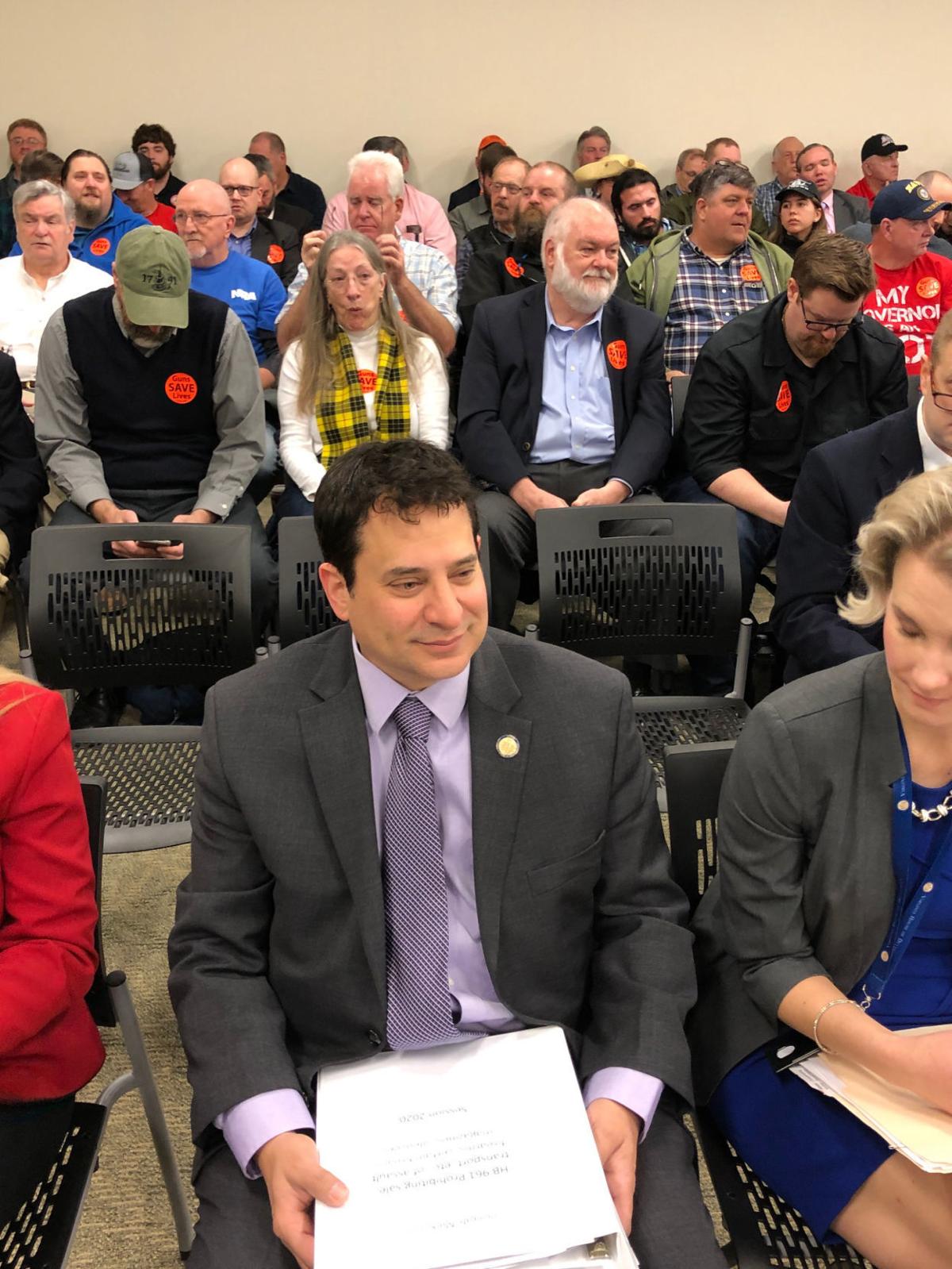 Legislation to ban assault weapons under an expanded definition won’t advance out of the General Assembly this year, a win for gun rights advocates and a setback for Gov. Ralph Northam’s gun control agenda.

Four Democrats joined Republicans to defeat the measure Monday in the Senate Judiciary Committee — a notable show of disunity in a party that emphasized gun control during its successful electoral bid for control of the legislature.

House Bill 961, introduced by Del. Mark Levine, D-Alexandria, would have banned possession of magazines that can hold more than 12 rounds and the sale of some types of semiautomatic rifles and pistols. The proposal sparked outrage among gun rights activists. The measure was a focus of a rally that drew an estimated 22,000 gun rights supporters to Richmond on Jan. 20.

Dozens of activists flooded the committee room and nearby hallways on Monday, erupting in cheers when it became clear the assault weapons ban would not pass.

“HB961 went down by a 10 to 5 vote!” Philip Van Cleave, president of the Virginia Citizens Defense League, tweeted after the vote. “Everybody’s hard work, Lobby Day, and sanctuary movement paid off!,” Van Cleave wrote. He was referring to the movement in which more than 100 Virginia counties, cities and towns pledged not to enforce gun laws they consider unconstitutional. Attorney General Mark Herring said the resolutions have no legal effect.

The Northam administration and gun control advocates expressed disapproval of the panel’s vote, arguing that the firearms the measure would ban are weapons of war that don’t belong in the hands of everyday citizens.

“With the last election, many had thought that the antiquated political thinking around guns was over — but today a few Democratic senators showed that they are still stuck in the past,” said Lori Haas, the state director for the Coalition to Stop Gun Violence. Her daughter was injured in the 2007 Virginia Tech shooting.

The measure presented to lawmakers on Monday was amended to include weaker penalties than the version Levine initially introduced. It also allowed current owners of would-be restricted firearms to keep them, banning only sales, transfers and imports.

The changes weren’t enough to convince some Democrats on the committee. After little debate among lawmakers, the panel voted to kick the bill to next year’s session, calling for a study of the legislation by the Virginia State Crime Commission.

“The votes in the Senate have not existed to pass the bill since we gaveled in” Jan. 8, “and the bill has numerous issues that needed to be refined,” Surovell said in a statement posted to Facebook defending his vote. He said increasing regulation of assault rifles is “a concept which I fully support.”

Deeds, Edwards and Petersen could not be immediately reached for comment.

Republicans were unified in opposing the bill, joined by a few dozen gun rights advocates who flooded the committee room to speak against the measure.

Patricia Webb, who said she holds a federal license to sell firearms, said the bill would force the closure of thousands of businesses.

“It would ban the vast majority of items that we sell. Most of the features listed as ‘assault’ features are actually safety features,” she told the panel.

The House had cleared the measure last week on a 51-48 vote, mostly along party lines. In that chamber, four of 55 Democrats broke with their party to oppose the ban: Dels. Lee Carter of Manassas, Steve Heretick of Portsmouth and Roslyn Tyler of Sussex voted against the bill; Kelly Convirs-Fowler of Virginia Beach did not cast a vote, though she was in the chamber.

“The Democratic platform last fall was very clear,” Filler-Corn said. “The [House] delivered on our promise to take action to keep those weapons off our streets. To call today’s vote by the Senate Judiciary Committee a disappointment would be an understatement.”

Alena Yarmosky, a spokeswoman for the Northam administration, said in a statement: “While the governor is disappointed in today’s vote, he fully expects the crime commission to give this measure the detailed review that senators called for. We will be back next year.”

The chambers will have to work out differences on bills that cleared the chambers in the coming weeks ahead of the session’s scheduled March 7 adjournment.

Secretary of Public Safety and Homeland Security Brian Moran (left) waited Monday to speak before the Senate Judiciary Committee on the assault weapons ban. It voted 10-5 to kick the bill to next year’s session, calling for a study by the Virginia State Crime Commission.