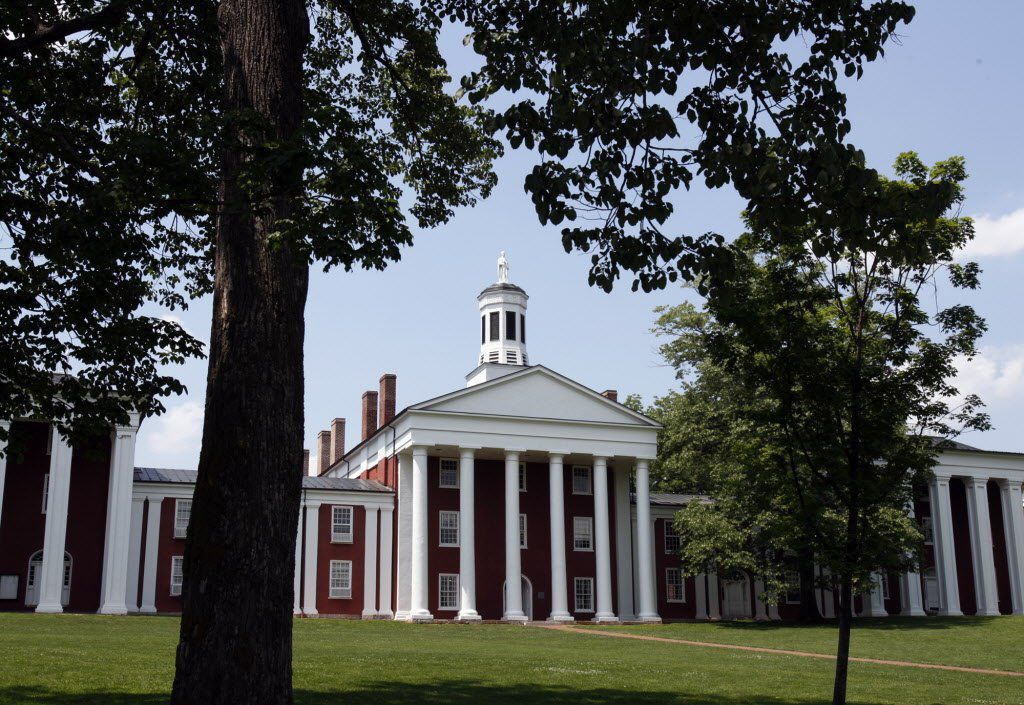 Washington and Lee University in Lexington.

The portrait of Robert E. Lee in Lee Chapel is of him when he was superintendent of the U.S. Military Academy in West Point in 1855.

Washington and Lee University has decided to make changes to the names of some campus buildings after concerns from students and faculty.

On Tuesday, the Board of Trustees announced that it will rename Robinson Hall as Chavis Hall, in honor of John Chavis, the first African-American to receive a college education in the United States. He graduated from Washington Academy, the predecessor of W&L, in 1799. Also, Lee-Jackson House will be renamed Simpson Hall in honor of Pamela Hemenway Simpson, who served as an associate dean of the college and helped move to a co-ed environment in the 1980s.

The board also announced that effective immediately, it will replace portraits of Robert E. Lee and George Washington in military uniforms inside Lee Chapel with portraits of the two men in civilian clothing. The board also ordered the doors to the statue chamber in the 1883 addition to Lee Chapel to be closed during university events.

The board’s decisions were made after meeting with students and faculty last weekend and after reviewing feedback from alumni.

In a statement, J. Donald Childress, rector of the board of trustees, and William C. Dudley, university president, said, “We appreciate the seriousness and thoughtfulness with which our fellow trustees have approached these matters. On behalf of the Board, we want to express our gratitude to all of those members of the community who contributed to our deliberations, through countless letters and conversations over the summer and on campus this weekend. We are fortunate to be part of a community that cares deeply about this institution and is so dedicated to its continued success.”

Last year, Dudley named the Commission on Institutional History and Community to address the university’s history after the visceral national response to events in Charlottesville, when white nationalists protested plans to remove a statue of Lee from a city park. The commission recommended the university stop holding campus events in Lee Chapel and instead transform the entire building into a museum with a new name.

One of the commission’s major areas of focus was Robinson Hall, named for a founder of the university. John Robinson left his estate, a large farm and 73 enslaved men, women and children, to the college. In 1836, the college sold the slaves and used the funds to build Robinson Hall on the campus’ historic Colonnade.

The commission recommended renaming Robinson Hall, expanding recognition of enslaved people on campus, hiring a genealogist to track down their descendants and potentially establishing an education fund to support their secondary or collegiate educations.

The board of trustees has taken the first step by renaming the building Chavis Hall, but the other recommendations have not yet been considered.

Dudley announced in August that the university planned to hire a director of institutional history, who will spearhead some of the initiatives suggested in the commission’s report. The director would be responsible for determining whether the university should hire a genealogist or use resources already dedicated to studying the history of African-Americans on campus. The new director will also be in charge of the design, construction and operation of a new museum dedicated to the history of Washington and Lee and its connections to American history. The director will also oversee Lee Chapel.

Robert E. Lee was president of Washington College from 1865, shortly after the Confederate surrender, until his death in 1870, when his name was added to the institution’s. Lee Chapel is a central building to campus life — Lee and his family are buried there.

ORLANDO, Fla. (AP) — The winning numbers in Saturday evening's drawing of the "Powerball" game were:

RICHMOND, Va. (AP) — Some people in central Virginia are preparing to fight a plan to put a natural gas pipeline through their properties that…

RICHMOND, Va. (AP) — A former Virginia lawyer has pleaded guilty in connection with allegations that he wrongfully obtained $4 million in fund…

Washington and Lee University in Lexington.

The portrait of Robert E. Lee in Lee Chapel is of him when he was superintendent of the U.S. Military Academy in West Point in 1855.