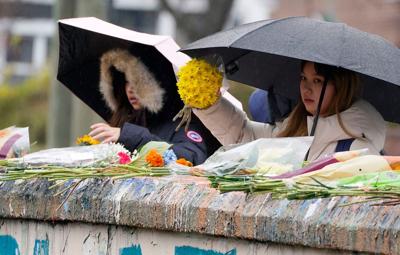 The University of Virginia has a program aimed at preventing on-campus violence. The program’s name is Just Report It. Someone did report Christopher Darnell Jones, Jr., the University of Virginia student accused of killing three of the school’s football players, badly wounding a fourth player and wounding a fifth student less severely last Sunday.

What the university now must address in the wake of a horrific mass shooting is why its Violence Prevention and Threat Assessment system could not stop the crime.

A student told school authorities in September — two months before the crime — that he had heard that Jones had a gun. The allegation was made during an investigation of a hazing event that involved Jones. The person offering the tip had not seen a weapon, campus Police Chief Tim Longo told reporters. Neither had Jones’ roommate.

Jones refused to cooperate with school authorities. That refusal continued after school officials discovered Jones received a suspended jail sentence for a concealed weapon violation in February 2021. So the Threat Assessment Team e-mailed Jones Oct. 26 asking him to cooperate and warn him that he faced the prospect of discipline if he didn't.

Nothing that happened before the killings kept Jones off a bus filled with students who went to see a play in Washington, D.C., Sunday afternoon. When the bus arrived back on campus Sunday night, Jones allegedly opened fire. Authorities have offered no motive for the crime. Jones appears on the school's 2018 football website as a player. ...

This tragedy raises hard questions about the utility and application of policies designed to intervene with troubled, potentially violent individuals before they commit crimes.

The University of Virginia’s Associate Vice President of Safety and Security leads a Violence Prevention Committee and Threat Assessment Team made up of multiple disciplines. The team includes a director of threat assessment and representatives from counseling and psychological services, the faculty and employee assistance program, and a faculty member, as well as personnel from medical center security, Student Affairs, the Office for Equal Opportunity and Civil Rights, the Office of University Counsel, patient safety/risk management, university and medical center employee relations and the University Police Department.

The difficulty of intervening with an uncooperative person is significant. It is a razor’s edge balancing act between stopping potential violence and violating civil liberties. According to a list of “Recommended Practices for Virginia College Threat Assessment,” no one can be detained against their will without having a “mental illness” and there is a “substantial likelihood that ... he or she will cause serious physical harm ... in the near future.” Legal experts have interpreted “near future” to mean within one week.

We don’t know what, if any, indications Jones offered to family, friends or fellow students before his alleged shooting spree.

The process for getting a court order for involuntary commitment can also be time consuming.

Still, the law does allow “consideration of a wide range of factors (‘other relevant information’) along with evidence of recent behavior that causes, attempts, or threatens harm,” the recommended practices document says.

Longo, the police chief, said Jones was part of a hazing investigation. What Jones' role was in that investigation remains unclear.

In the end, there seem to be more questions than answers about Jones.

The University of Virginia must examine in detail how it acted, especially its actions after it discovered that Jones had a concealed weapons conviction. That knowledge combined with the tip that Jones told someone he had a gun, as well as Jones’ refusal to discuss anything about a firearm. Those alarms signaled the need to act quickly, press harder and worry much more.

Understanding that a student involved in hazing and gun investigations, including a weapons conviction, might demand more intervention than the routine threat of the student disciplinary process affords is a good starting point for looking at policy changes.

Going forward, the rest of us also must treat everything involving guns and schools as urgent and deadly serious. As the University of Virginia learned tragically last Sunday, firearms offer no margin for error.

Column: VCU has lost its way

Column: JFK’s courage, idealism inspired many, including my uncle

Column: In Richmond, evictions are nearing a crisis point

David Silverman, an expert in early American and Native American history, discusses the history of Thanksgiving.

The U.S. Senate has taken a major step toward protecting same-sex and interracial marriage by advancing a landmark bill that would rightfully recognize the legality of such marriages in every state in the nation.

Column: We need capable, ethical leaders – now more than ever