Editorial: A lesson and a legacy in the Capital Gazette tragedy
0 Comments
Share this
1 of 2 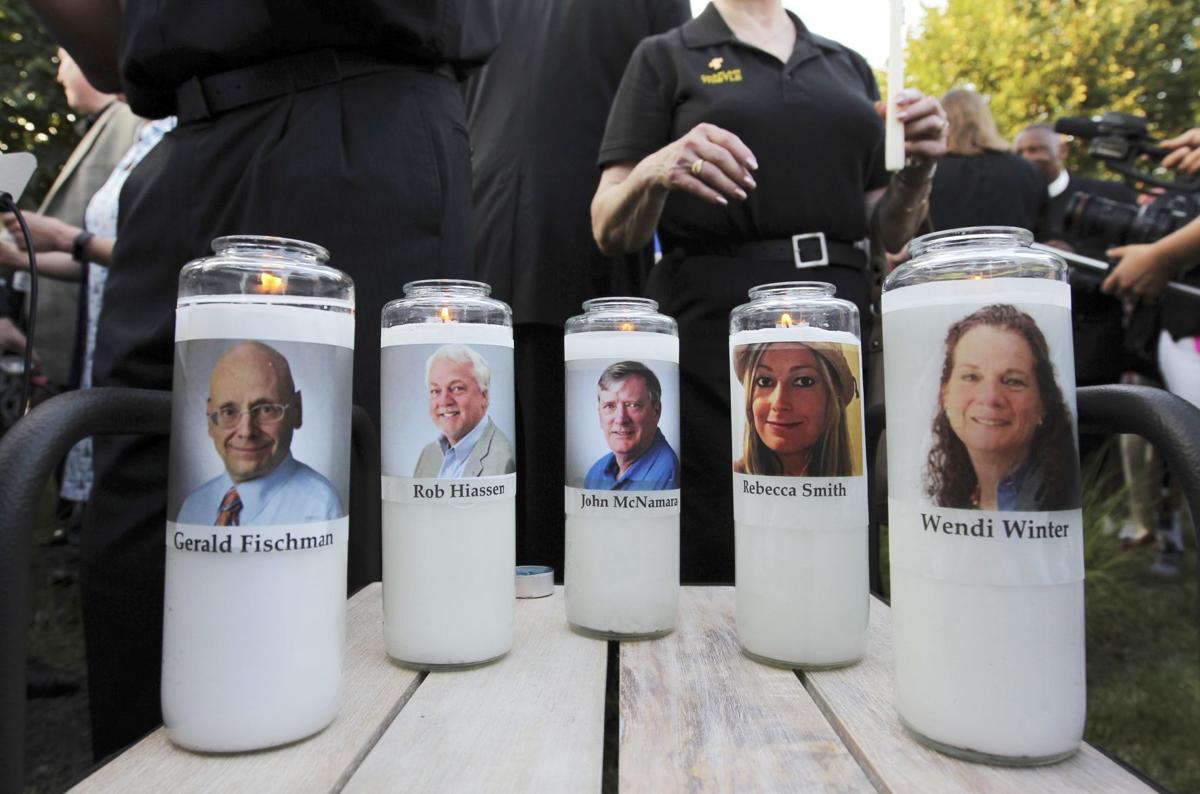 In this June 2018 file photo, photos of five employees of the Capital Gazette newspaper adorned candles during a vigil. 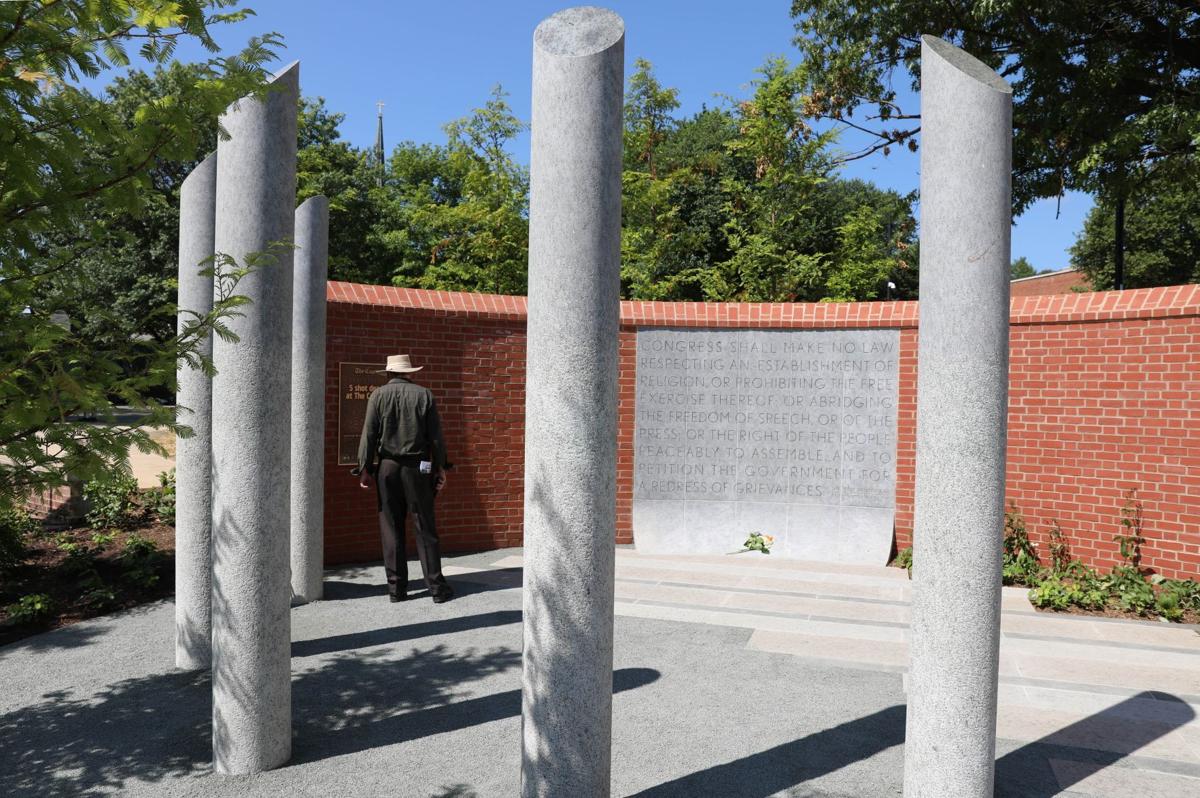 In late June, a visitor stood by a new memorial dedicated to the five people who died in the mass shooting at the Capital Gazette in 2018.

With the finding Thursday by an Annapolis, Md., jury that the Capital Gazette gunman indeed was criminally responsible for the brutal, calculated murders three years ago of five employees at the newspaper, the legal chapter of this horror story largely comes to a close.

The shooter, whose only expressed regret was not killing more people, most certainly will be consigned to spend the rest of his life in prison at his sentencing, still to come. There no longer is any possibility that he will be sent to a psychiatric hospital, as he and his lawyers had been angling for, peddling a thin defense that he had a mental disorder that prevented him from understanding the consequences of his actions.

The jury members clearly saw through that effort, determining after a brief deliberation that he not only understood the criminality of his actions, but was capable of acting lawfully — when he wanted to.

How could they not? The gunman fantasized about the June 28, 2018, attack at the Annapolis news office for five years as he went about his day-to-day life, and he actively plotted it for at least two. He put together multiple backup plans, studied patterns of police responses to mass shootings and tailored his actions to ensure he would get out alive.

Once inside on that fateful day, he coldly began firing and later would express delight to a state psychiatrist at discovering a survivor, whom he then executed at point-blank range.

“He was proud of what he’d had done,” the doctor testified during the three-week trial to determine the gunman’s mental capacity — a painful, but important process within the justice system. Society long has recognized that prison is no solution to mental illness, and that there is nothing to be gained by imprisoning those who truly are unable to judge right from wrong, no matter how heinous their actions.

That was not the case for this gunman, however, which was obvious to many from the start. The friends and families of his five victims never should have been subject to this fiction, for while the shooter clearly was troubled, nothing in his person excuses him from culpability here.

We commend our colleagues at the Capital Gazette and other media outlets who day in and day out watched the proceedings, subjecting themselves to every painful detail to ensure the public received a full accounting of the process, and our hearts go out to the survivors who relived their terror on the witness stand in support of justice.

Of course, the idea that justice has been served is another fiction. The sanity of the shooter won’t bring back his victims: editor and columnist Rob Hiaasen, a married father of three who is forever frozen at 59; editorial page editor Gerald Fischman, who had a “wicked pen” and wry wit, 61; sports writer John “Mac” McNamara, whose one-liners were legendary, 56; sales assistant Rebecca Smith, who was engaged to be married, 34; and community correspondent Wendi Winters, whose three weekly columns brought neighbors closer together, 65.

And it won’t lessen the pain their parents, spouses, children, friends and colleagues feel at their loss. There is no sense to be found in these deaths, carried out as revenge by a man who felt he had been wronged because the newspaper wrote about a campaign of harassment he once waged against a former high school classmate.

We won’t use his name here. He wanted to be famous, notorious, and we won’t help further his cause. He is relegated to a lesson, not a legacy — a lesson on the continued need for advocacy regarding commonsense gun laws and easy access to mental health interventions.

The legacy belongs to Rob, Gerald, Mac, Rebecca and Wendi. Last month, on the anniversary of their deaths — declared “Freedom of the Press Day” in Maryland — they were memorialized in five granite pillars collectively known as “The Guardians of the First Amendment.”

Their deaths have served to strengthen the resolve of journalists around the nation who understand that the work they do often is dangerous, but vital to our country. In the names of these five, we will continue to search for truth, expose misdeeds and bring light to all.

In communities across Virginia, the term “development” can carry different meanings.

People and politicians have been harping on the need for rural broadband for so long that we have to ask: Will we know what to do when we fina…

We pay tribute to our dear friend and fellow journalist from Roanoke, Forrest “Frosty” Landon, who died Monday at age 87. Mr. Landon’s impress…

Editorial: Renewing the excitement about space

Editorial: The Declaration of Independence, July 4, 1776

This is the second of a two-part editorial series. The first appeared in the July 28 edition of the RTD.

Donald Trump was not the worst president, but he comes close. So says C-SPAN in its newly released 2021 rankings of U.S. presidents.

Editorial: As access to alcohol evolves, there’s an even greater need to balance business and public safety

In March 2020, Gov. Ralph Northam responded to the novel coronavirus by declaring a state of emergency.

In this June 2018 file photo, photos of five employees of the Capital Gazette newspaper adorned candles during a vigil.

In late June, a visitor stood by a new memorial dedicated to the five people who died in the mass shooting at the Capital Gazette in 2018.