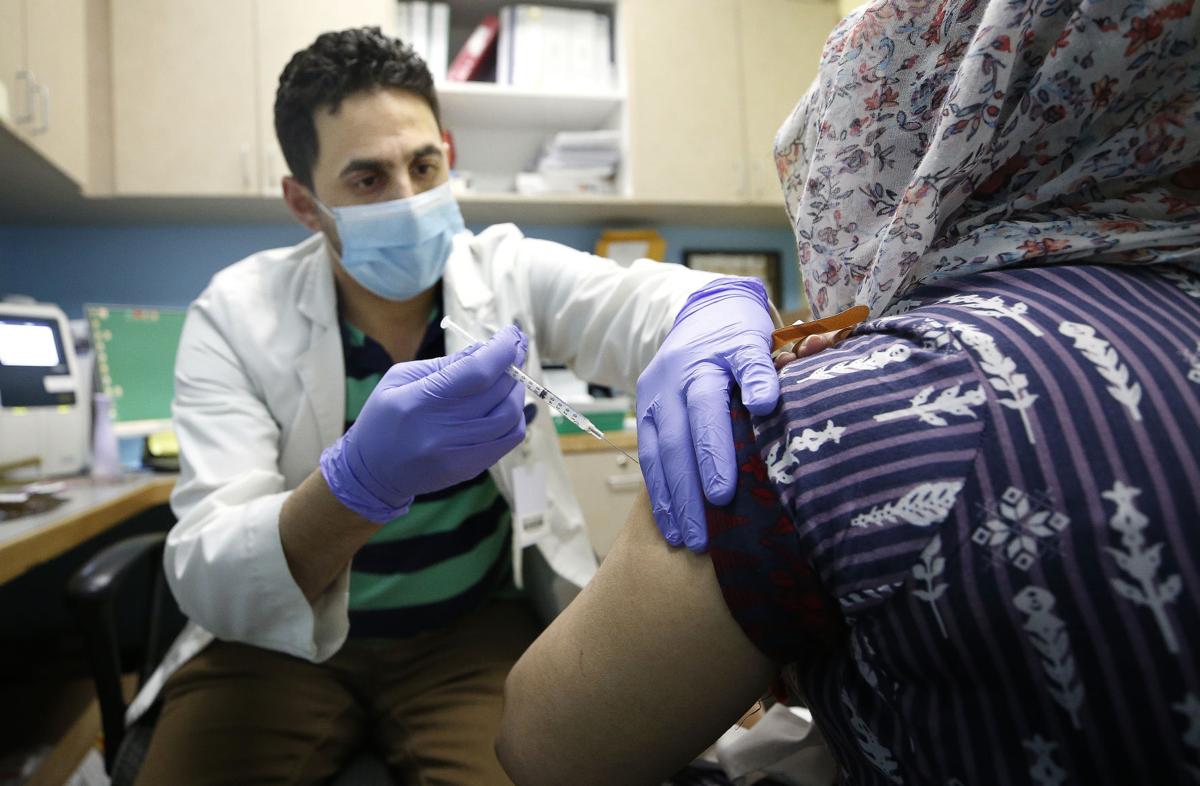 On Feb. 5, Dr. Joseph Jadallah, pharmacy manager at Buford Road Pharmacy, gave an employee a second round of the COVID-19 vaccine. 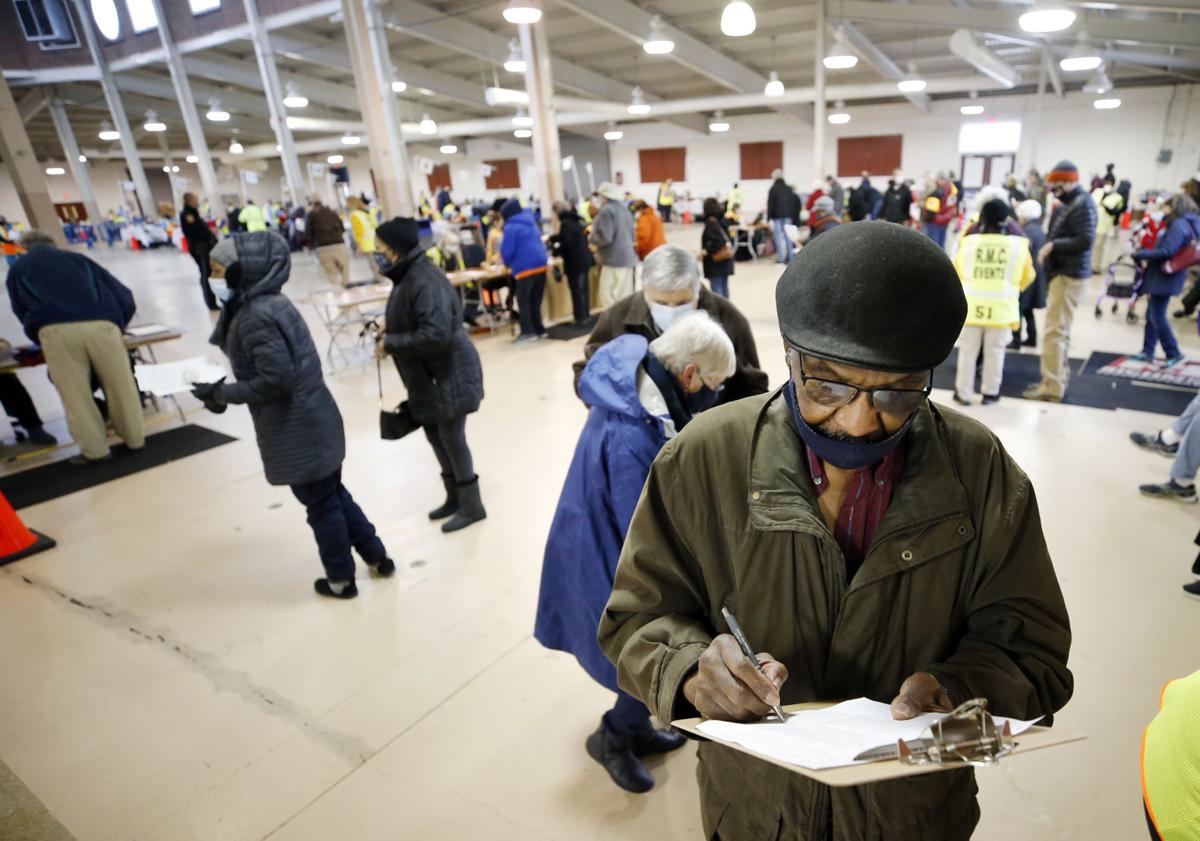 William Jones. 83, filled out paperwork prior to getting the COVID-19 vaccine at Richmond Raceway on Feb. 2.

As COVID-19 vaccinations slowly become available to more Americans, variants of the novel coronavirus have started circulating in the United States and elsewhere, making people wonder whether the shots still are worth getting.

The answer to that is “yes,” more so than ever.

The more freely the virus circulates, the more opportunity it has to mutate, scientists say. The best thing we can do to contain the number of variants is to vaccinate the world, as fully and as quickly as possible, while continuing to limit infections with face coverings and social distancing.

So far, the variants — the three main ones first were found in the United Kingdom, South Africa and Brazil — appear to be more contagious than the original version. Early tests have indicated that the U.K. strain might be more lethal as well.

Existing vaccines appear to at least be somewhat effective against these variants, but it still is unclear just how effective. And new variants almost are certain to arrive. Creating new vaccines or booster shots to counter these changes are two options.

And one of the most tantalizing possibilities that science offers at this point is a pancoronavirus vaccine that would target parts of the virus that don’t rapidly mutate. That wouldn’t just protect against all forms of COVID-19, but against future pandemics involving coronaviruses. For that matter, it also would prevent common colds caused by coronaviruses. And it would allow science to avoid a game of Whac-A-Mole with a dangerous and ever-changing threat.

But in the short term, before U.S. health experts can effectively tackle the problem of a mutating virus, they need a much better picture of what already is out there. The nation has done a dismayingly lackluster job sequencing the genomes of the virus samples collected from around the country, which would identify variations in the virus, even though laboratories have been waiting for samples to test.

According to Science magazine, this country is sequencing fewer than four samples out of 10,000, compared with Denmark, which has sequenced more than half of positive samples.

An administration official told CNN that sequencing efforts are ramping up, but “we are not where we want to be.” You think?

All three of the major variants now have been found in the United States, but it’s important to know which variants are circulating where. That’s how scientists learn how well existing vaccines protect against them, and it allows public health officials to target lockdowns at the hot spots where more dangerous versions are circulating. Up to now, the Biden administration’s priority rightly has been ramping up vaccine production and distribution, but it cannot waste any more time getting the nation up to speed on sequencing.

This is how important genomic sequencing is: No one really knows if the U.K. variant actually originated there. It was discovered there because the country has a robust and coordinated genomic sequencing operation. There could be other variants, originating in this country, that have not been identified because we simply haven’t been looking for them.

Using the mRNA technology employed for the Pfizer and Moderna vaccines, which enables vaccines to be developed much faster than traditional methods do, pharmaceutical executives say they could retool existing vaccines to handle one or more variants within six to eight weeks. But that is not a good reason to wait for vaccination.

It could be months before new vaccines are available — and no one knows which new variants might be circulating then. Meanwhile, the current mRNA vaccines appear to have at least partial effectiveness against the new strains, preventing mild cases and, like the flu vaccine, easing the effects of serious ones.

The more we vaccinate — and wear masks, keep our distance from others and practice the remaining disease-prevention techniques that have become all too familiar — the more we keep the virus from spreading. The less it spreads, the less opportunity it has to change.

But protecting people from new versions of the virus first means knowing what and where those versions are, through a federally coordinated program of genomic sequencing. That should become the next big anti-COVID-19 effort of the Biden administration.

— Adapted from the Los Angeles Times

Not getting your unemployment check on time?

The past year has been hard for everyone, but spare a thought for youngsters.

In 1970, the United States Postal Service (USPS) adopted the eagle as its official seal. As the institution explains, “Eagles are powerful, st…

Editorial: Three connections we have to Mars

It’s 133 million miles from here to Mars, but the recent landing of the Perseverance rover on the red planet still is local news (sort of).

Editorial: Shots in arms — and continued public health precautions — are our best defense against COVID-19

For nearly a year, public health officials have pored over different kinds of data to assess community spread of COVID-19 and help keep Virgin…

On Thursday morning just before 8 a.m., traffic rumbled down Broad Street in Richmond. Among the vehicles traversing the road was a school bus…

Editorial: The way forward to end this pandemic

On Wednesday morning, Gov. Ralph Northam stood at the podium at the Patrick Henry Building in Richmond, acting with a sense of command, not un…

Editorial: The future of working remotely

If you’ve been working remotely for the past year because of the pandemic, think of how your life has changed.

The global coronavirus pandemic is hurting more than our health. More than one-third of U.S. nonprofits are in jeopardy of closing within two …

Living in fear of COVID-19 has taken its toll on all of us. As a nurse, I believe the science. No one likes to wear a mask. Just do it. No one…

On Feb. 5, Dr. Joseph Jadallah, pharmacy manager at Buford Road Pharmacy, gave an employee a second round of the COVID-19 vaccine.

William Jones. 83, filled out paperwork prior to getting the COVID-19 vaccine at Richmond Raceway on Feb. 2.