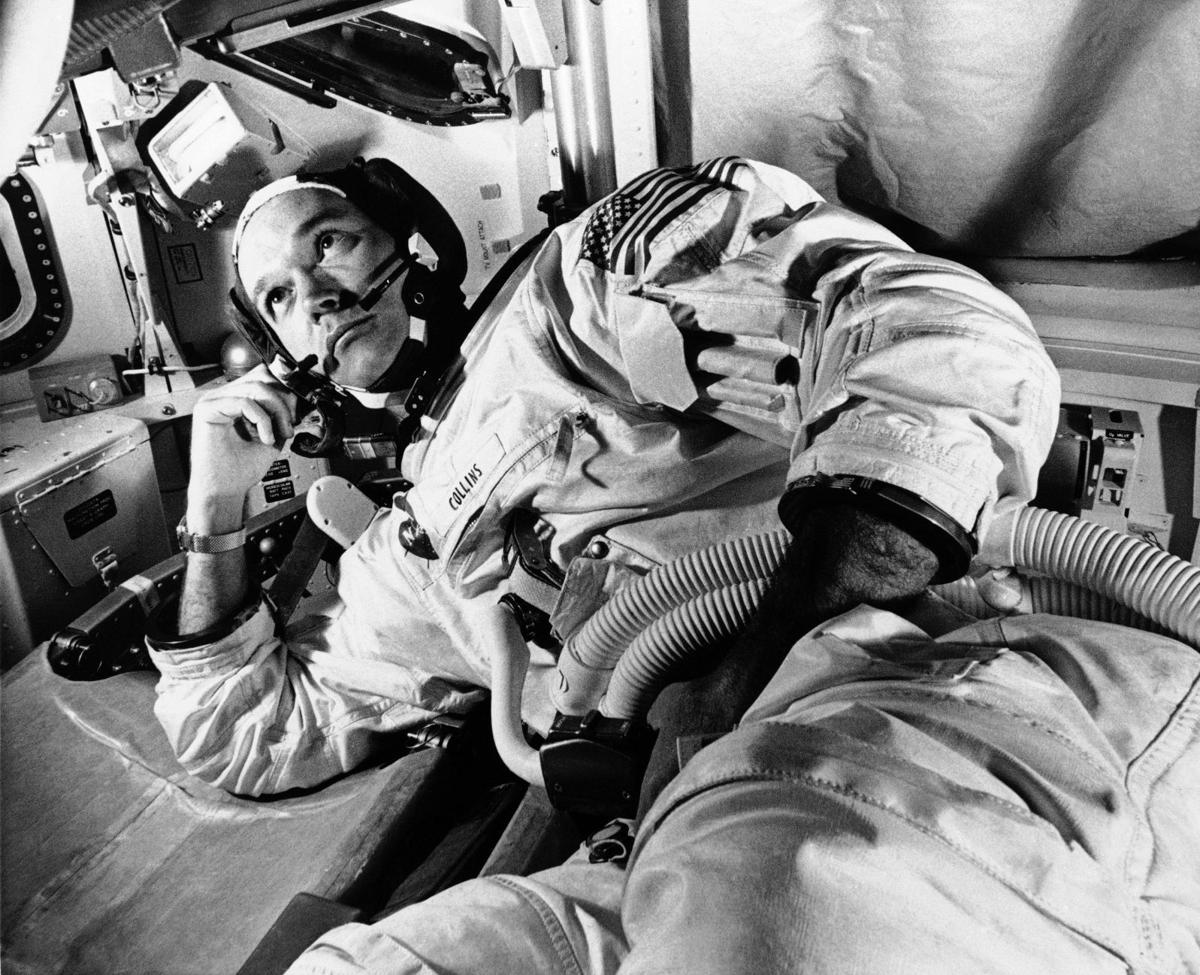 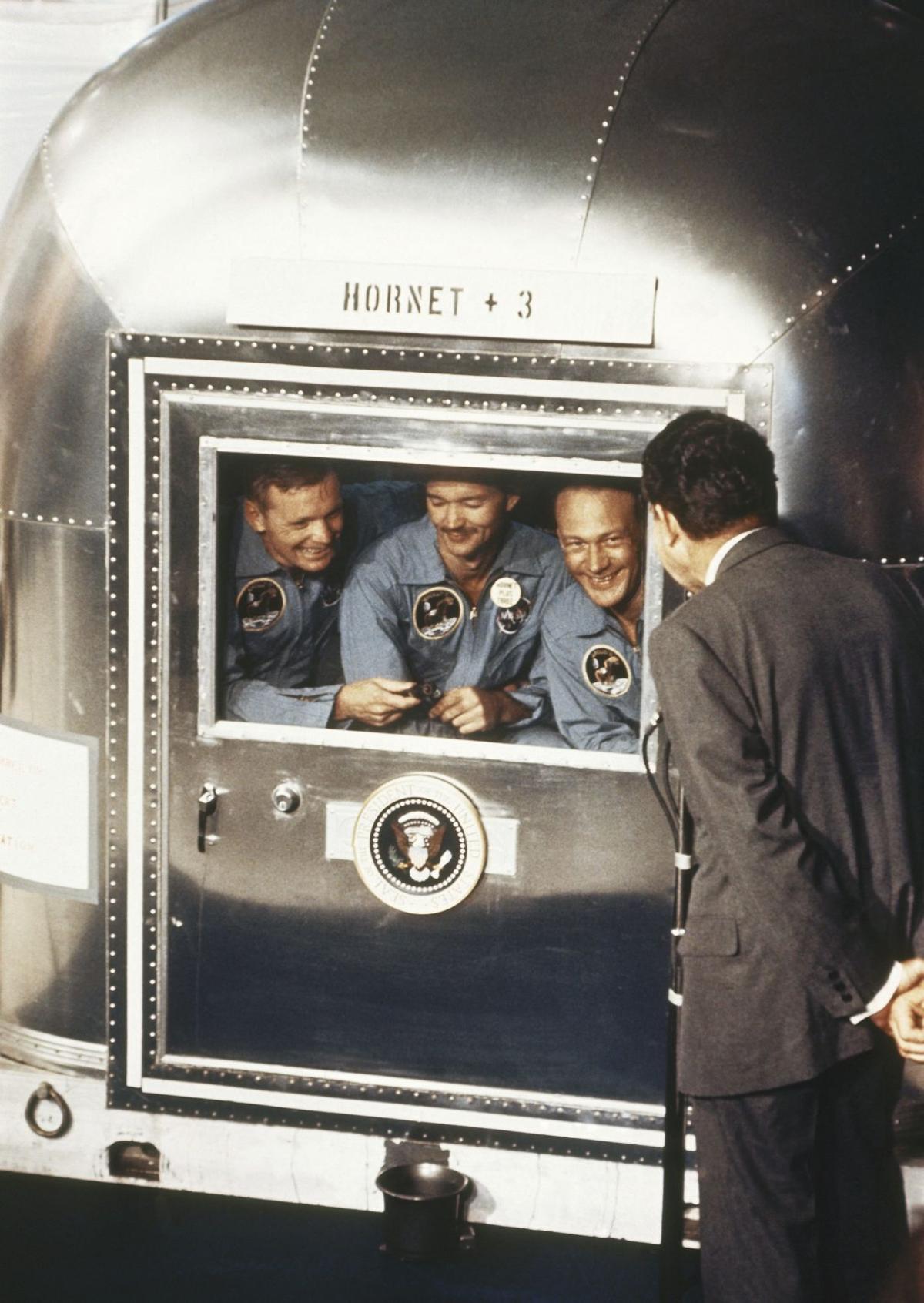 On July 24, 1969, President Richard Nixon (back to camera) greeted the Apollo 11 astronauts in a quarantine van on board the U.S.S. Hornet after splashdown and recovery in the Pacific Ocean. From left were Neil Armstrong, Michael Collins and Edwin “Buzz” Aldrin.

The death of NASA astronaut Michael Collins at age 90 on April 28 brought memories of an exciting time for America flooding back for those of us of a certain age.

We remember that heady day on July 20, 1969, when Neil Armstrong and then Edwin “Buzz” Aldrin became the first humans to step foot on the moon — and we watched it all on our TVs in grainy black and white. What a moment when Armstrong took “one small step for [a] man, one giant leap for mankind.”

As the two men explored the lunar surface, Collins — in a less visible but nonetheless critical role — orbited above them, piloting the command module Columbia. Thirty times he circled the moon until he successfully maneuvered the space capsule to reunite with Armstrong and Aldrin in the lunar module, then brought the Apollo 11 crew safely back to Earth.

What an exciting — an amazing — time for America and for the world. Only a little more than eight years after Alan B. Shepard Jr. rocketed into suborbital flight to become the first American in space, we had put men on the moon.

Shepard’s flight lasted but 15 minutes before splashdown in the Atlantic Ocean, but it thrust America into a rapidly developing space race with the Soviet Union. His flight followed by less than a month that of Soviet cosmonaut Yuri Gagarin, who became the first person in space.

It was a tense time in the world. Soviet firsts in space shook Americans to the core, as space became the symbol for the Cold War then going on between America and the Soviet Union. Would the Soviets become the dominant political system? Could America catch up and then overtake the Soviets?

America’s position was cemented on Sept. 12, 1962, when President John F. Kennedy, in a speech at Rice University in Houston, pledged that we would put a man on the moon by the end of the decade, igniting an effort that united science, politics and the American spirit.

And we made it. We made it. And Michael Collins was a big part of it.

“As pilot of the Apollo 11 command module — some called him ‘the loneliest man in history’ — while his colleagues walked on the Moon for the first time, he helped our nation achieve a defining milestone,” acting NASA Administrator Steve Jurczyk said in a statement.

“Michael remained a tireless promoter of space. ‘Exploration is not a choice, really, it’s an imperative,’ he said. Intensely thoughtful about his experience in orbit, he added, ‘What would be worth recording is what kind of civilization we Earthlings created and whether or not we ventured out into other parts of the galaxy.’”

By December 1972, America had become blasé about sending men to the moon. Faced with a huge debt from the Vietnam War, we decided it was too costly for more moon missions. There were spikes in interest in space from time to time, but for the most part, Americans stopped looking skyward.

But NASA didn’t stop dreaming, didn’t stop planning. NASA began looking beyond the moon, successfully launching several missions to Mars. Just this past month, on April 19, Ingenuity, the first powered controlled flight by an aircraft on a planet other than Earth, began its exploration of the red planet — just only 120 years since the Wright brothers made the first flight on our planet in Kitty Hawk, N.C.

Interest in space once again is rising as NASA announced plans for a public-private alliance to send men — and, for the first time, women — to land on the moon by 2024. From there, plans are to send humans to Mars.

That truly is exciting.

Sir Isaac Newton — who established the role of gravitation — said, “If I have seen further than others, it is by standing upon the shoulders of giants.”

As America once again begins its exploration of space, it is, indeed, on the shoulders of giants.

As we mourn Michael Collins, we remember the contributions he and so many other men and women made to our knowledge of space.

And we look forward to the contributions of so many more in the months and years to come.

A new historical marker recognizes the country’s first Black veterinarian, who lived in Lynchburg. The marker tells the remarkable story of Au…

Editorial: Virginians have to drive smarter

In the spring of 2020, the arrival of COVID-19 caused unprecedented traffic shifts on roads across Virginia and the nation.

In the 2009 engaging memoir “A Million Miles in a Thousand Years” by author Donald Miller, there is a story about a concerned dad whose teenag…

Editorial: Financial literacy is a critical piece of the COVID-19 recovery

In 2004, Congress passed a resolution establishing April as Financial Literacy Month. The goal was “to raise public awareness about the import…

On July 24, 1969, President Richard Nixon (back to camera) greeted the Apollo 11 astronauts in a quarantine van on board the U.S.S. Hornet after splashdown and recovery in the Pacific Ocean. From left were Neil Armstrong, Michael Collins and Edwin “Buzz” Aldrin.