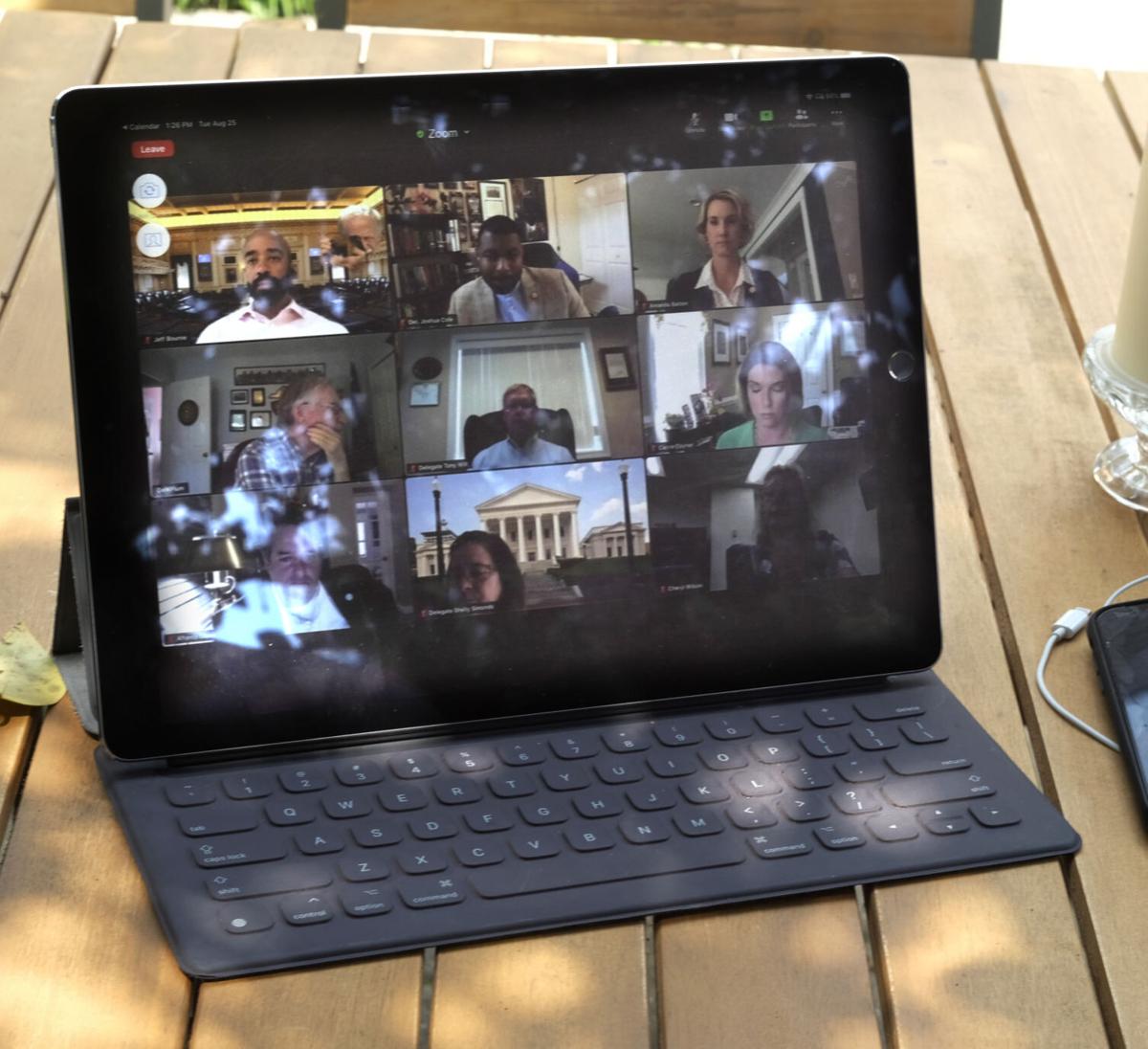 Del. Jeff Bourne, D-Richmond, top left, participated in a virtual meeting of the House Public Safety committee as he sat under a tree in his Richmond backyard on Aug. 25. 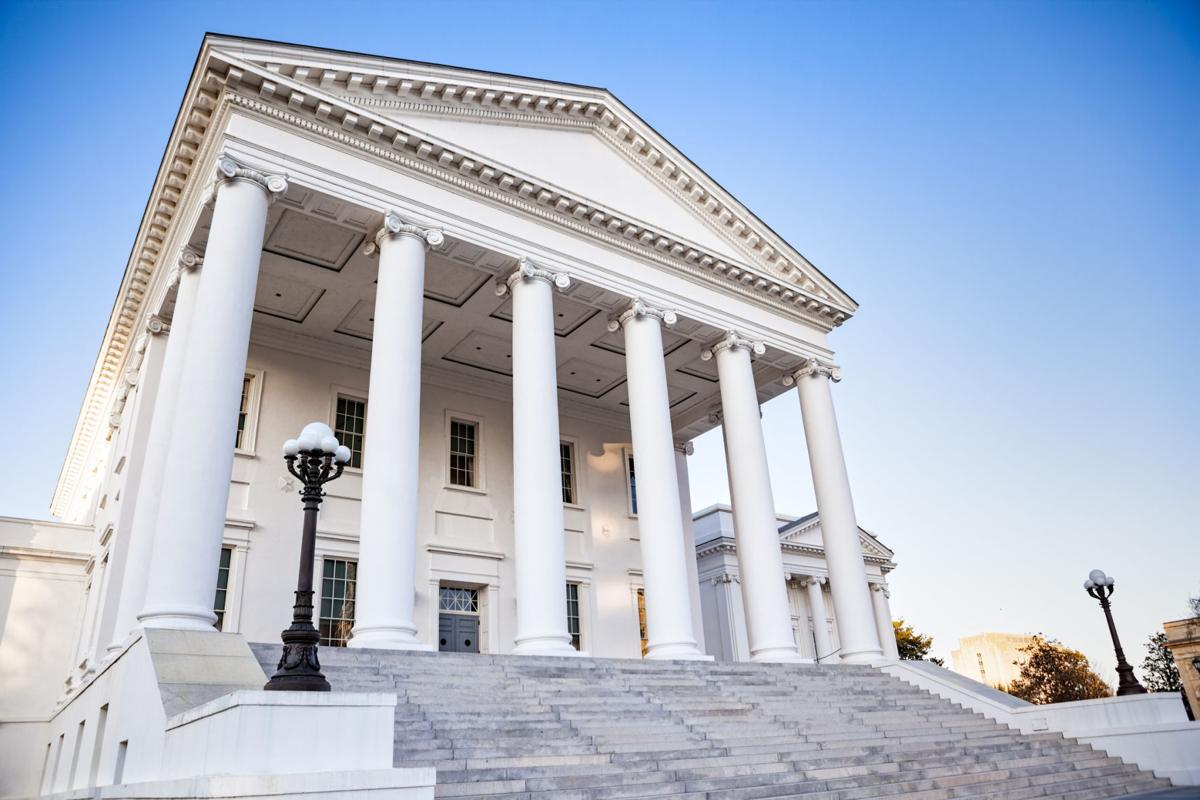 When Gov. Ralph Northam called for a special session of the Virginia General Assembly in July, the topline concern prompting the return of legislators to Richmond was the state’s budget.

The language in the governor’s proclamation was crystal clear: The special session would commence on Aug. 18 “for the purpose of adopting a budget based on the revised revenue forecast and consideration of legislation related to the emergency of COVID-19 and criminal and social justice reforms.”

“We have a unique opportunity to provide critical support to Virginians, invest strategically in our economic recovery, and make progress on policing and criminal justice reform,” Northam said in a July statement accompanying the proclamation. “Let’s get to work.”’

After nearly six weeks of in-person deliberations for the state Senate and virtual chambers for the House of Delegates, legislative leaders unveiled their proposed spending plans on Friday. It’s about time. We look forward to hearing more details about how they will fill a projected $2.8 billion hole.

Now is not the time for a lack of dialogue. If anything, this is the time for more discussion. Core services — education, health care, public safety, transportation — depend on it.

Of the $135 billion budget adopted by lawmakers in March, $46 billion makes up the general fund — revenue that goes toward government programs in the aforementioned areas. But those dollars primarily come from three key revenue streams: individual income taxes, corporate income taxes, and sales and use taxes.

In a tight economy, the flow of money to fund anything from programs at our children’s schools to upgrades for our roads and streets grows tighter. Inaction by the General Assembly creates an unsettling waiting game for localities across the Richmond region.

“Virginians are hurting, and the commonwealth is stepping up,” Northam said in mid-August, a few days before the start of the special session in August.

“Our country is battling both a health crisis and an economic crisis at once, so Virginia is advancing new programs to help people stay in their homes, care for the ones they love, and feel safe in the community,” he said.

If Northam was right, why would it be late September and local governments have heard little to nothing about the state’s financial game plan? Why has it taken so long to develop a budget? How long will the discussion last? Will this be known as the endless session?

In a statement released Friday, House Speaker Eileen Filler-Corn, D-Fairfax, and House Appropriations Chairman Luke Torian, D-Prince William, said the House budget proposal will protect Virginia’s prized Triple-A bond rating “under a diminished revenue reforecast.” We hope so. Lawmakers need to exercise prudence during this time of economic uncertainty, and not take actions that would jeopardize the state’s financial standing.

To say it’s been an unusual session is an understatement.

In the past, special sessions were convened with a narrow focus and took place over a much shorter time frame, typically several days or weeks. The July 2019 gun-related session lasted roughly 90 minutes as Republicans, who then controlled the assembly, quickly shut down debate over potential safety measures sought by Democrats.

Because of the pandemic and the need to social distance, meetings this session are taking place away from the 232-year old state Capitol. On days the full chamber meets, the state Senate convenes in person at the Science Museum of Virginia. Except for its first day, the House of Delegates has been conducting its business virtually.

The session comes at a cost to taxpayers, so far more than $296,000 in payments to lawmakers, according to the Senate and House clerk’s offices — a figure that only will grow as meetings continue.

At this rate, this summer’s special session — which now has extended into fall — is on course to last longer than the regular session scheduled to start in January.

With global cases exceeding 32 million and deaths hovering around 1 million, the pandemic continues to challenge our resources and resiliency. Just over 7 million cases have been reported in the U.S., with more than 203,000 deaths. Virginia reports more than 144,000 cases — including Northam and his wife, Pam — and in excess of 3,100 deaths.

As we wrote in August, an economic recovery amid a public health crisis not only involves families fighting through job losses, rising health care costs or other financial hurdles. It also requires the return of confidence that everyone safely can engage in normal consumer spending — dining, shopping, travel and other industries that have been hit hard.

The clock is ticking. State lawmakers finally have budget proposals before them. And it’s about time.

Editorial: Our laws have to keep pace with virtual learning

When Gov. Ralph Northam closed Virginia schools on March 23 for the rest of the 2019-20 academic year due to COVID-19, the decision ushered in…

This election, Virginians are being asked whether they want the General Assembly to continue drawing legislative boundaries behind closed door…

Editorial: A COVID-19 measure that matters

On its own, the 220,000 U.S. deaths from the coronavirus are enough for us to wear a mask, practice social distancing, wash our hands and resp…

What do you know about the Lost Cause? The Valentine wants to know. The city’s oldest museum is seeking community input about how to reinterpr…

Editorial: The false promise of a surplus during a pandemic

The city of Richmond entered 2020 with budgetary priorities that could not have accounted for COVID-19.

The warm summer months have given us a slight advantage in the fight to slow the spread of COVID-19. Being able to dine outdoors, visit at a d…

The global coronavirus pandemic has taken its toll on all aspects of our lives. It’s upended our work routines, our children’s education and o…

Is the carousel of General Assembly budget conversations coming to an end? It took almost as much time as a normal 60-day session, but after w…

Del. Jeff Bourne, D-Richmond, top left, participated in a virtual meeting of the House Public Safety committee as he sat under a tree in his Richmond backyard on Aug. 25.