Mary B. McCord column: Private militias must stop pretending to have authority they don’t have
35 comments
Share this
1 of 2 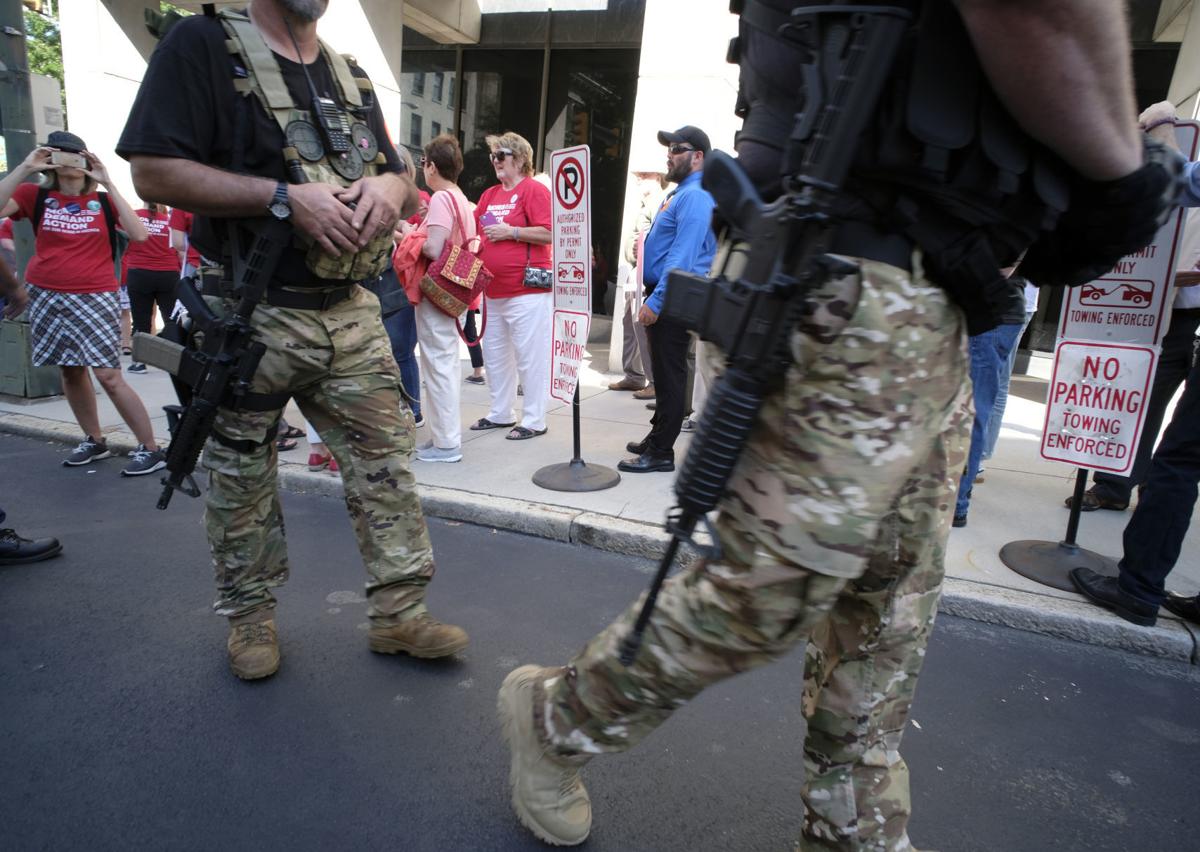 Men carrying AR-style rifles walked past a blocklong line of citizens waiting to enter the Pocahontas Building at Capitol Square during the July 9 special session about gun issues.

By Mary B. McCord

On the day of the special session called by Gov. Ralph Northam to consider a suite of proposed gun safety laws in the aftermath of the mass shooting in Virginia Beach, hundreds of people gathered around the state Capitol to exercise their First Amendment rights to express their views for and against the proposals. Many of those on the “gun rights” side of the issue also exercised what they believe to be their Second Amendment rights by openly carrying firearms, as they are permitted to do under Virginia’s open-carry laws.

But the activity of two organized, armed militias — the Pennsylvania Light Foot Militia and the III% Security Force Militia — went well beyond what is protected by the First and Second Amendments. These heavily armed militias took up positions outside the public entrance to the Pocahontas Building across the street from the Capitol, appearing to patrol a long line of constituents seeking to enter the building to petition their elected representatives before the special session started. Their projection of authority confused and intimidated members of the public. And it was unlawful.

Virginia’s state constitution, like that of 47 other states, contains a provision that prohibits private militias from operating outside of state authority. This is for good reason. Private militias, heavily armed and answering to no governmental officials, present a severe threat to public safety, arrogating to themselves when and under what circumstances to use lethal force.

Last year, in a successful lawsuit against the private militias that usurped legitimate law enforcement authority during the Unite the Right rally the previous year, a judge in Charlottesville ruled that, based on Virginia’s constitution, “There appears to be no place or authority for private armies or militia apart from the civil authorities and not subject to and regulated by the federal, state, or local authorities.”

Virginia’s criminal code, similarly, prohibits falsely exercising the functions and powers of a law enforcement or peace officer. Purporting to have law enforcement authority and to “keep the peace” — especially while armed with assault-style rifles and wearing military garb — is not the job of private militias that report to no legitimate local, state or federal authority. The same judge in Charlottesville recognized the dangerousness of that activity in his ruling last year.

Some would argue that the activities of private militias are protected by the Second Amendment, but the Supreme Court has been clear that the Second Amendment protects an individual’s right to bear arms for self-defense. It does not protect any right to band together to form private armies wholly outside governmental authority. Indeed, the Supreme Court in 2008 reaffirmed one its own rulings dating back to 1886 that “the Second Amendment . . . does not prevent the prohibition of private paramilitary organizations.” And that’s exactly what the Virginia Constitution prohibits.

The militias that appeared to stand guard over the line of constituents at the Pocahontas Building last month were not in line themselves and were not waiting to speak with their elected officials. Indeed, most of them were from out of state. Their massive display of weaponry and confusing appearance — some bearing badges that said “U.S.” and wearing military-style camouflage that looked like that of the National Guard — intimidated gun safety advocates, including survivors of gun violence.

It also apparently made some gun rights advocates uncomfortable. One posted on Facebook that he “witnessed something while standing in line today that I hope I never see again,” describing a young woman “visibly shaken” by the appearance of militia members “in military-style apparel and armed to the teeth.”

Although constituents had the right to expect that the Division of Capitol Police would have watched over the line of constituents that morning for public safety reasons, ensuring no altercations between those with strongly held opposing views on a topic of intense public interest, they should not have had to contend with private, AR-15-bearing militia members, pretending to exert authority they don’t have.

And those expressing their First Amendment-protected views on both sides of the issue should not have to contend with them at this week’s public hearings on gun safety measures before the Virginia State Crime Commission. As prominent Virginia historian and scholar A.E. Dick Howard has written, the state constitution’s ban on private militias “ensures the right of all citizens . . . to live free from the fear of an alien soldiery commanded by men who are not responsible to law and the political process.”

Mary B. McCord is legal director and a visiting professor of law at Georgetown Law’s Institute for Constitutional Advocacy and Protection. She is a former acting assistant attorney general for national security at the U.S. Department of Justice. Contact her at mbm7@georgetown.edu.

J. Chapman Petersen column: It is time end the state of emergency

It’s been more than 400 days since the issuance of the executive order on March 12, 2020, declaring a state of emergency due to the COVID-19 p…

Dan Rodricks column: Man had been incarcerated for nearly 65 of his 86 years. Why?

Men carrying AR-style rifles walked past a blocklong line of citizens waiting to enter the Pocahontas Building at Capitol Square during the July 9 special session about gun issues.