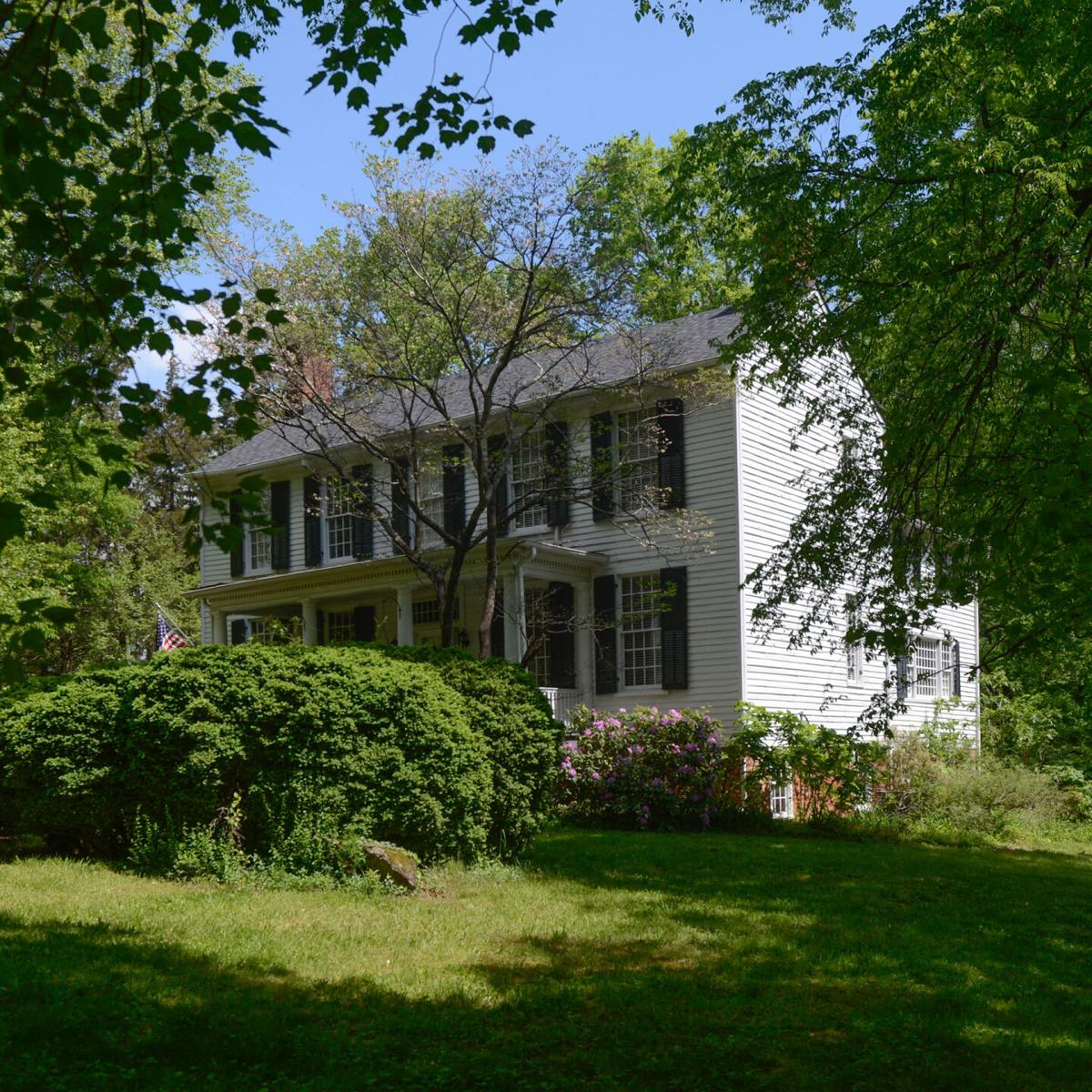 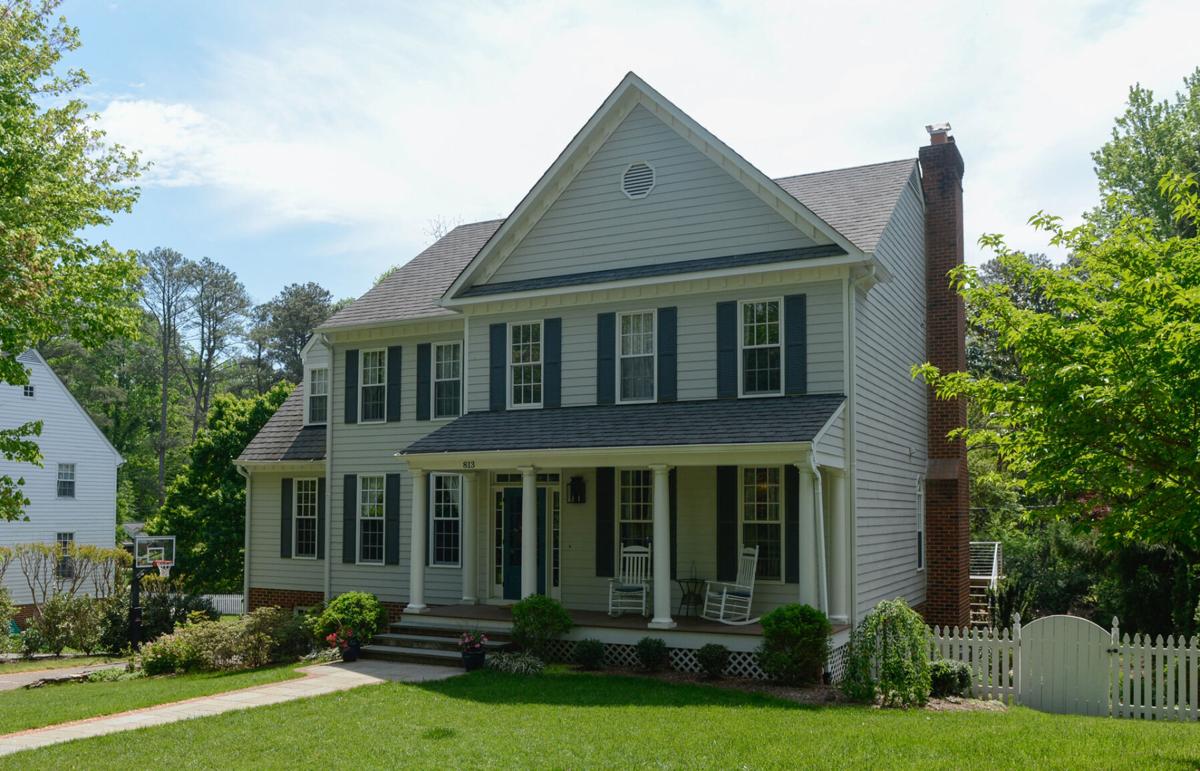 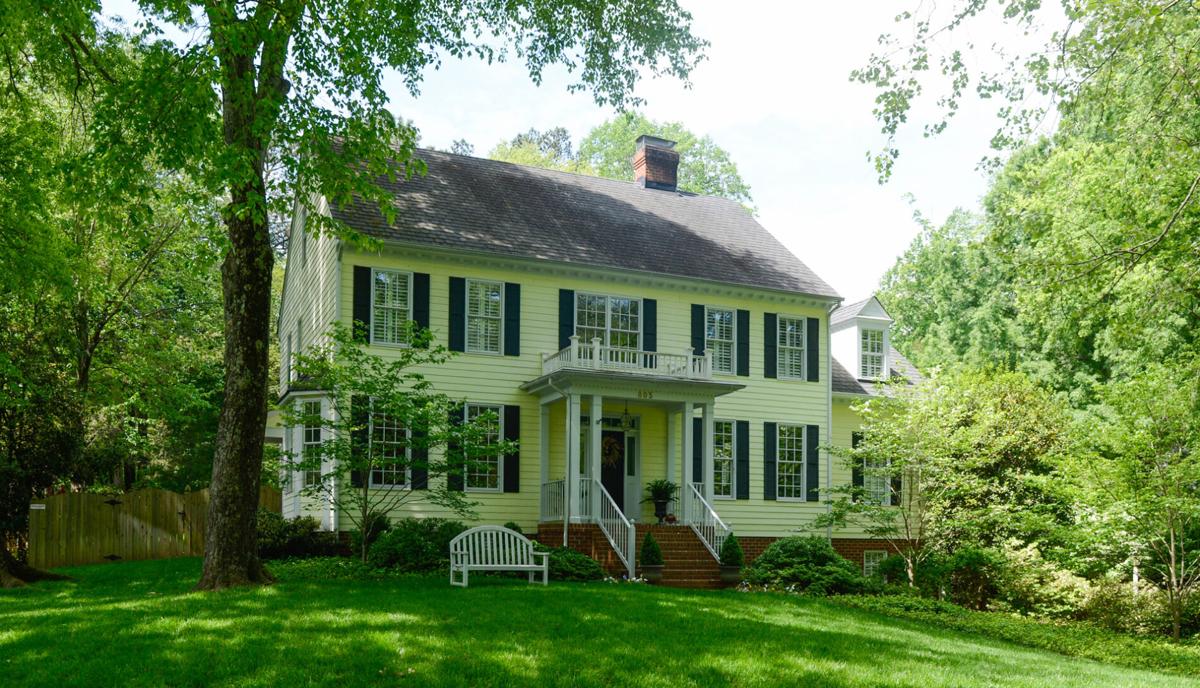 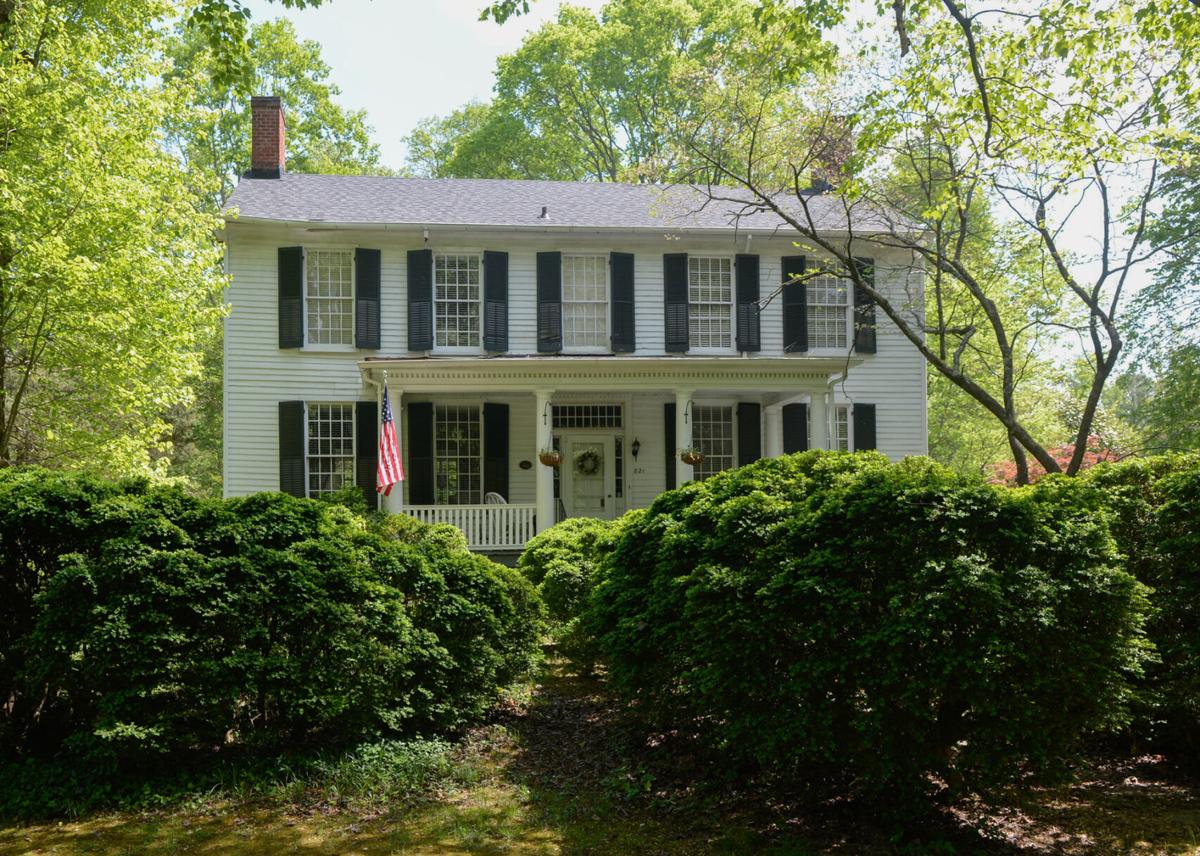 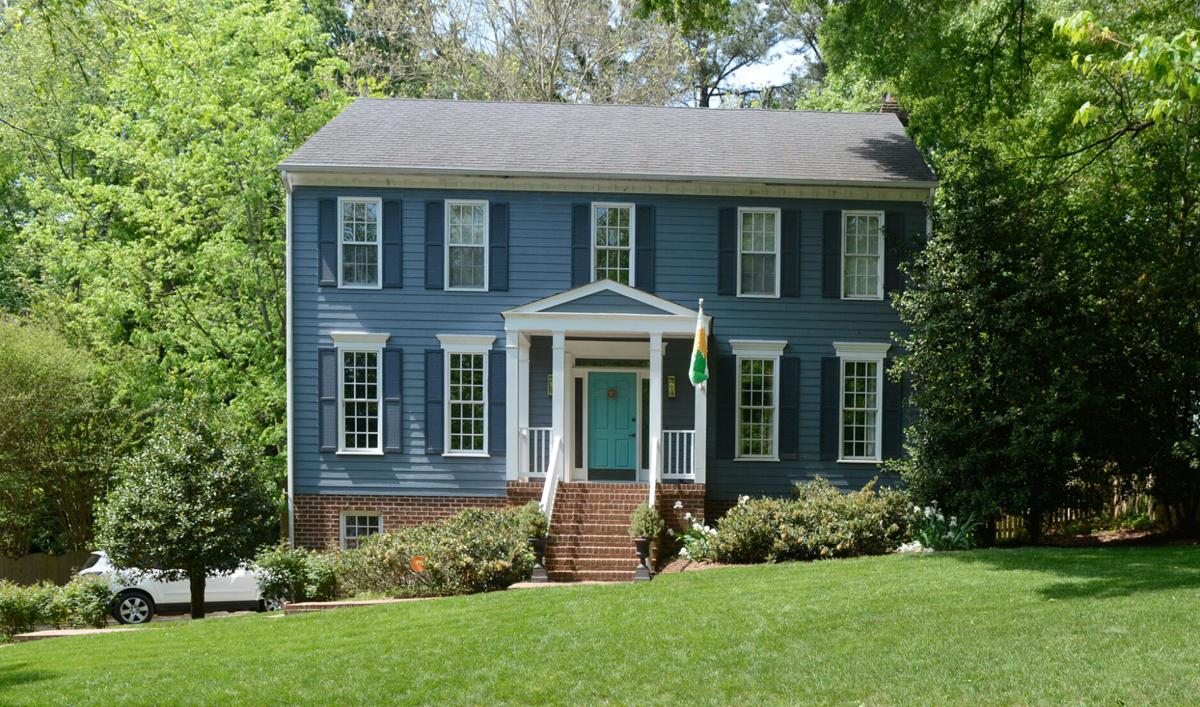 When the farmhouse property known as Paradise in western Henrico County went on the market in 1994, it drew a lot of interest, especially among residential developers.

The house, which had been built circa 1826, sat on seven acres of land near the intersection of Lindsay Drive and Lindsay Court.  And it offered a rare opportunity for an infill development in an area that had been largely built out since the 1960s.

Builder and developer John T. Robertson made an offer that stood out, though.  He would subdivide the property and build homes on it, but he and his wife Fran would live in the farmhouse themselves and preserve its historic character.

That was important to the seller, because her family – the Carringtons – had owned the house since 1936, Robertson says.

Coming up with a design that would preserve the farmhouse’s primacy in the new neighborhood – a central focus for Robertson – was going to be tricky.  The topography was challenging, and the site had already shrunk considerably with suburban expansion.

But if he and his team did their jobs well, Robertson believed they could protect the farmhouse in perpetuity.

William Bosher, a builder from King William County, bought what was then a 404-acre site in 1824 and constructed the house on a hill overlooking Little Westham Creek sometime between 1826 and 1827.  (Bosher’s name might sound familiar to local ears.  In 1823 his brother built Bosher’s Dam just west of the present-day Edward E. Willey Bridge in western Henrico.)

The property, which was named Paradise Farm after the Paradise trees that grew wild there, was bounded roughly by the western edge of the Westhampton Lake, present-day Forest Avenue and River and Three Chopt roads.

“The house embodies the quiet dignity of the early 19th-century plantation houses that dotted the former countryside of western Henrico,” said Calder Loth, retired senior architectural historian for the Virginia Department of Historic Resources.  “Clad with its original beaded weatherboards, the dwelling’s symmetrical five-bay façade echoes the formality of pre-Revolutionary homes of the region.”

Bosher sold the Paradise property to Thomas Patterson in 1833.  By then, it was an active tobacco farm.

“Patterson was also from King William County, so he may have known Bosher,” Robertson said.

Patterson died a year after buying the property, and his widow, Susan, raised their four children on the farm.

One of her sons, Richard Archibald Patterson, became a doctor and served as an Army surgeon in the Civil War.  He also pursued the family’s interest in tobacco, and a long-delayed payment for a shipment sent to England during the war saved him financially.

Patterson used the windfall to found R. A. Patterson & Co., which created the Lucky Strike brand of cut-plug tobacco in 1871.  (The product became cigarettes in the early 1900s.)

After the Pattersons sold the house in 1896, it had several owners before the Carringtons bought it in 1936.

Nonetheless, the 3,500-square-foot house has changed surprisingly little over time.

“It hasn’t been compromised by additions,” said Robertson, who still lives in the house with his wife.

Inside, it retains its original heart-pine floors and staircase, which features “a simple, turned handrail and plain, rectangular balusters typical of the period,” Loth said.

The house’s nine fireplaces still have their original Federal-style mantels.

Among the few alterations:  a Greek Revival porch that probably replaced a simpler one in the Federal style, and a Colonial Revival door surround on the front elevation.

In addition, the county poured a concrete slab in the basement in the late 1940s to accommodate the first two grades of Tuckahoe Elementary School.   The school, which is nearby, was under construction at the time, and the farmhouse’s basement provided temporary classrooms.

The property’s smokehouse still stands in the backyard, much of which the Robertsons have allowed to mature as a natural habitat.

“Although Paradise’s agrarian setting has succumbed to modern development, its curtilage retains a bucolic, old-fashioned charm sheltering the house from the modern, workaday world,” Loth said.

Designing a subdivision around a piece of history

By the time the Robertsons bought the house in 1994, all but seven acres of the farmland had been sold and subdivided.  Robertson kept two acres for the original house, and he subdivided the remaining five acres for the infill development.

Robertson and his business partner, John L. Stinson Jr., named the community Carrington Court, after the family that had lived there for decades.

Robertson consulted Richmond-based landscape architect Ralph Higgins about the development’s layout.  Higgins suggested installing a private drive that would run in front of the farmhouse and turn along its eastern edge, thereby allowing the majority of the eight new homes to face the farmhouse.  (Two of the community’s homes front onto Lindsay Court.)

“Curving the roadway around the house made it the focal point of the development,” Higgins said.  “We could have knocked the house down and made more money by building more houses.  But it deserved to be saved, and the best way to do that was to save it in context – to make sure it fits into the new neighborhood.”

“The old house was put in the primary position on the site, and that position needed to be preserved with the house,” Higgins said.

Robertson handled the development side, which began shortly after Robertson and Stinson acquired the property in 1994.  Stinson oversaw construction, which began the following year and wrapped up in 1996.

The new houses, which are clad in HardiePlank and have Federal and Georgian front porches, were designed to be stylistically sympathetic to the farmhouse.

“We wanted the new houses to match the farmhouse in mass and scale and to feel like they were part of a little community,” Robertson said.

Early sales were strong, and the neighborhood has seen little turnover in its 25 years, which Robertson says is a sign that his team did good work designing and building the community.

Three of the eight new houses still have their original owners, and a fourth original owner sold their house last month in the process of downsizing.  Most of the sales have been by word of mouth, Robertson says.

“Although it’s one of my oldest projects, it’s still my favorite,” Robertson said.  “The historical preservation of Paradise was especially important to us, and having the privilege of living in a neighborhood along with our customers, who became our friends for over 26 years, has been really special.”