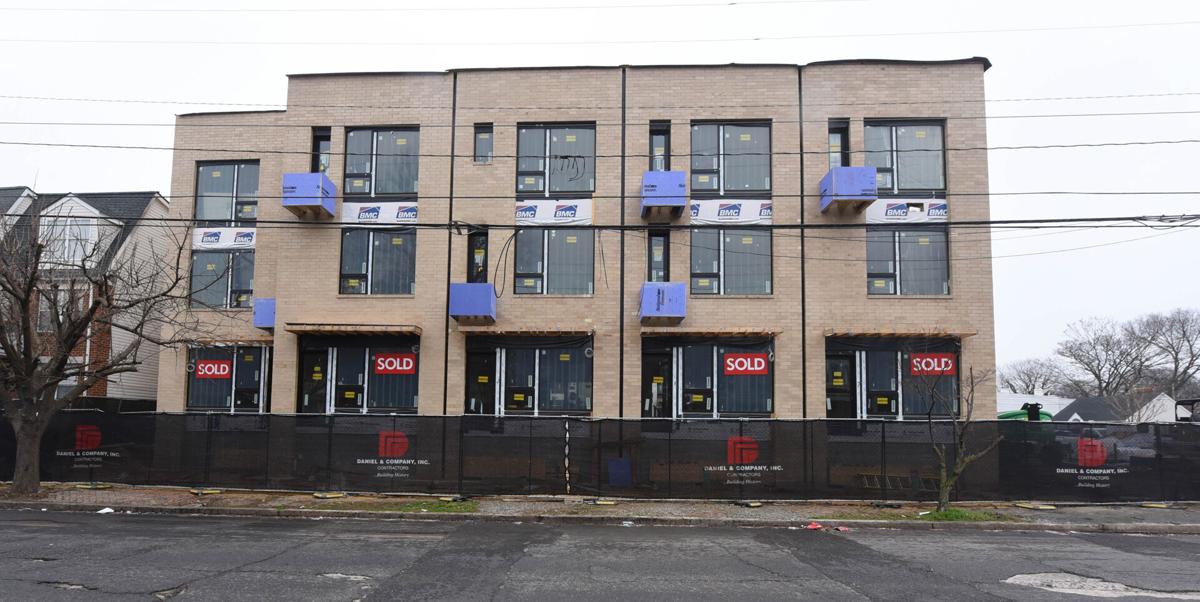 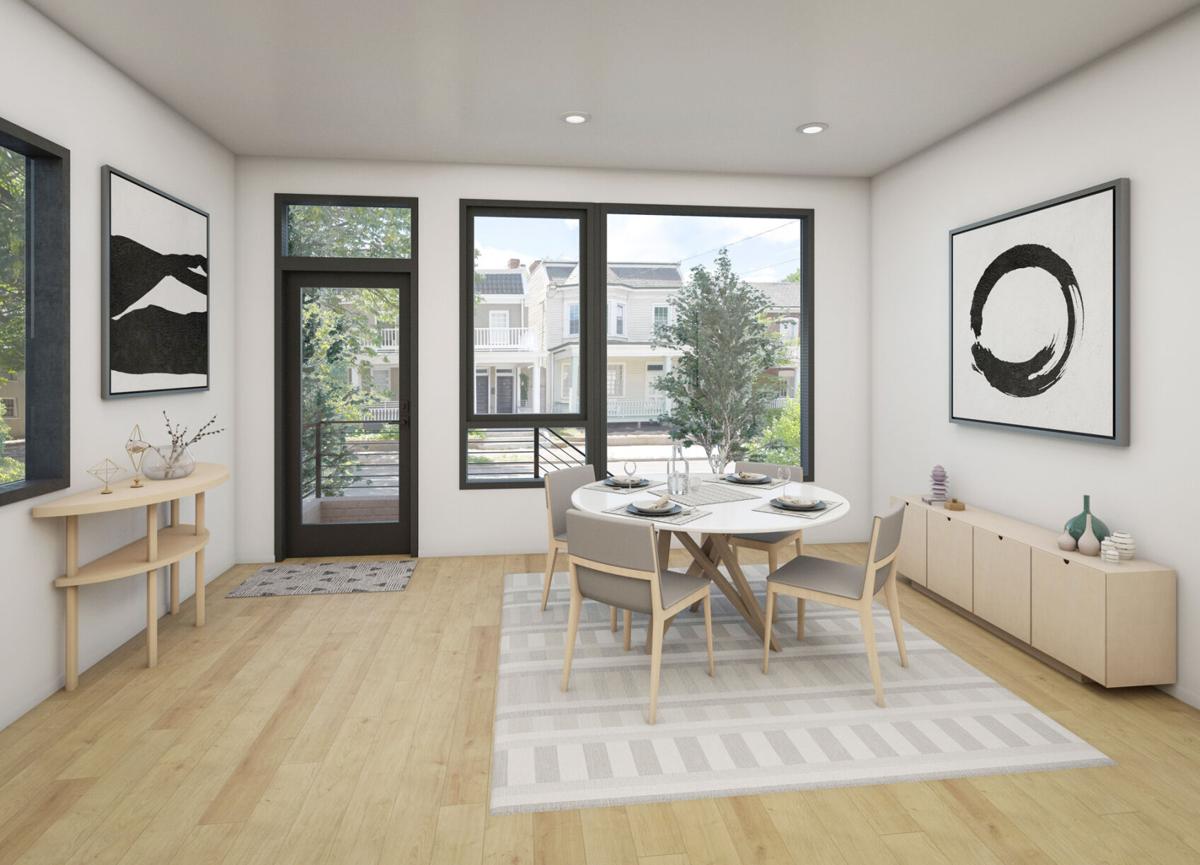 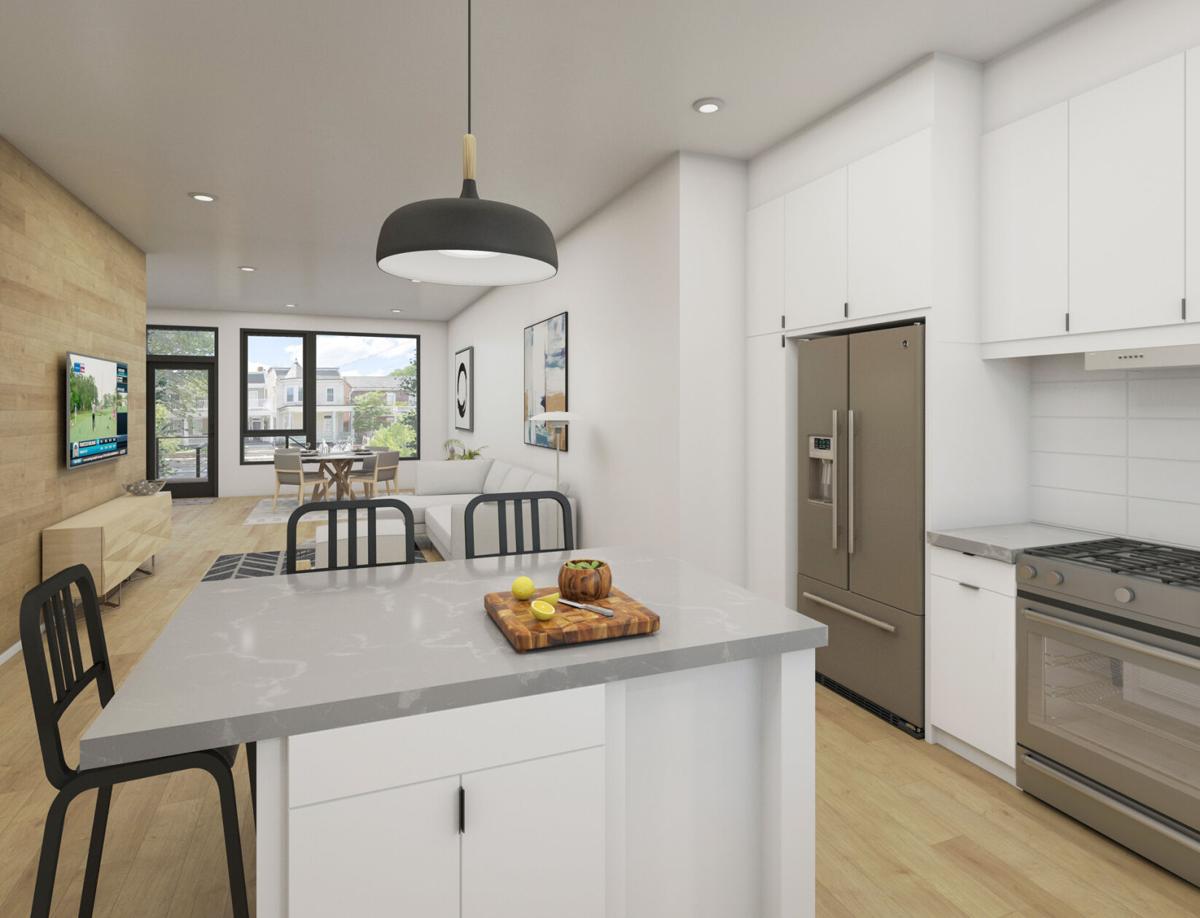 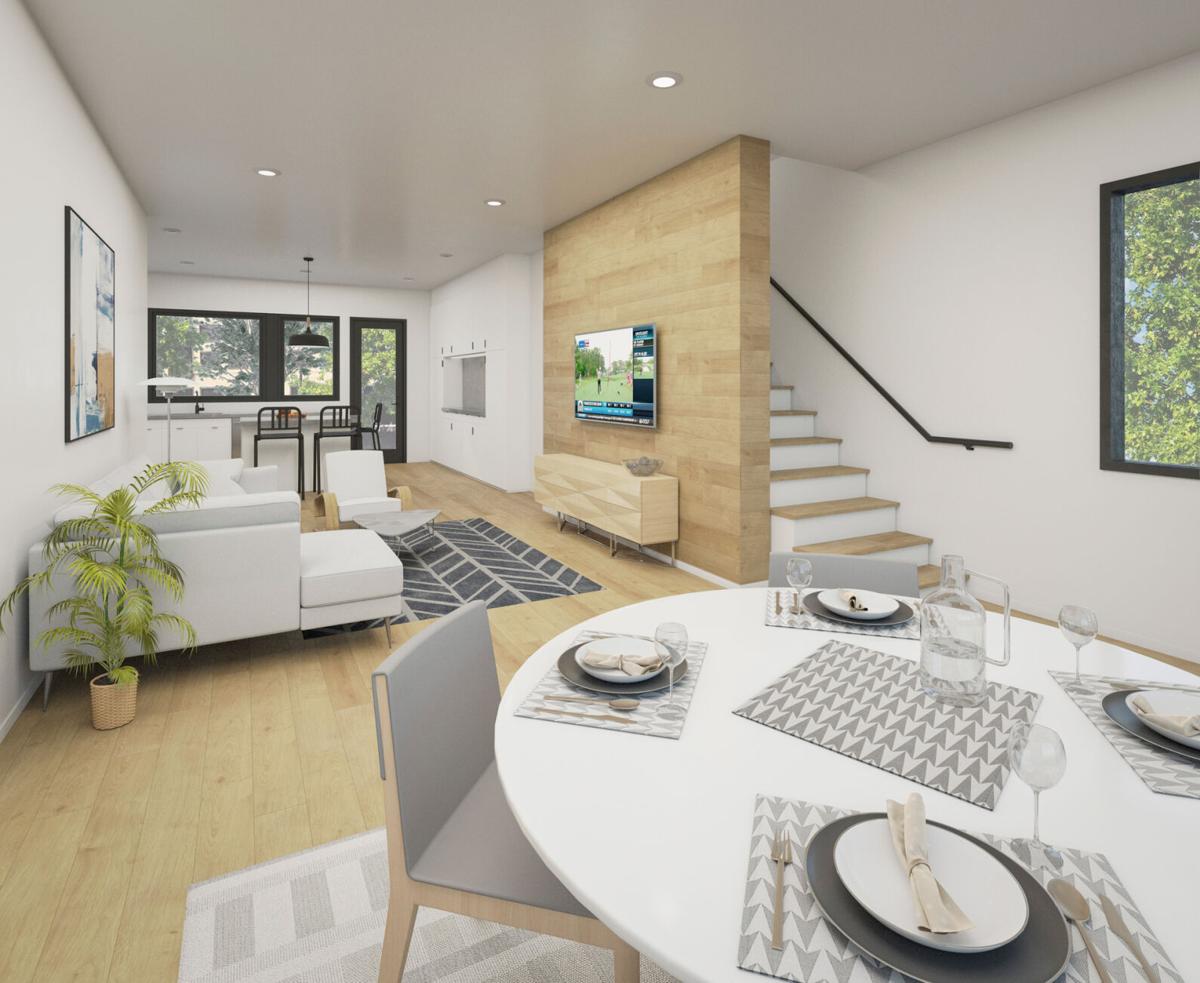 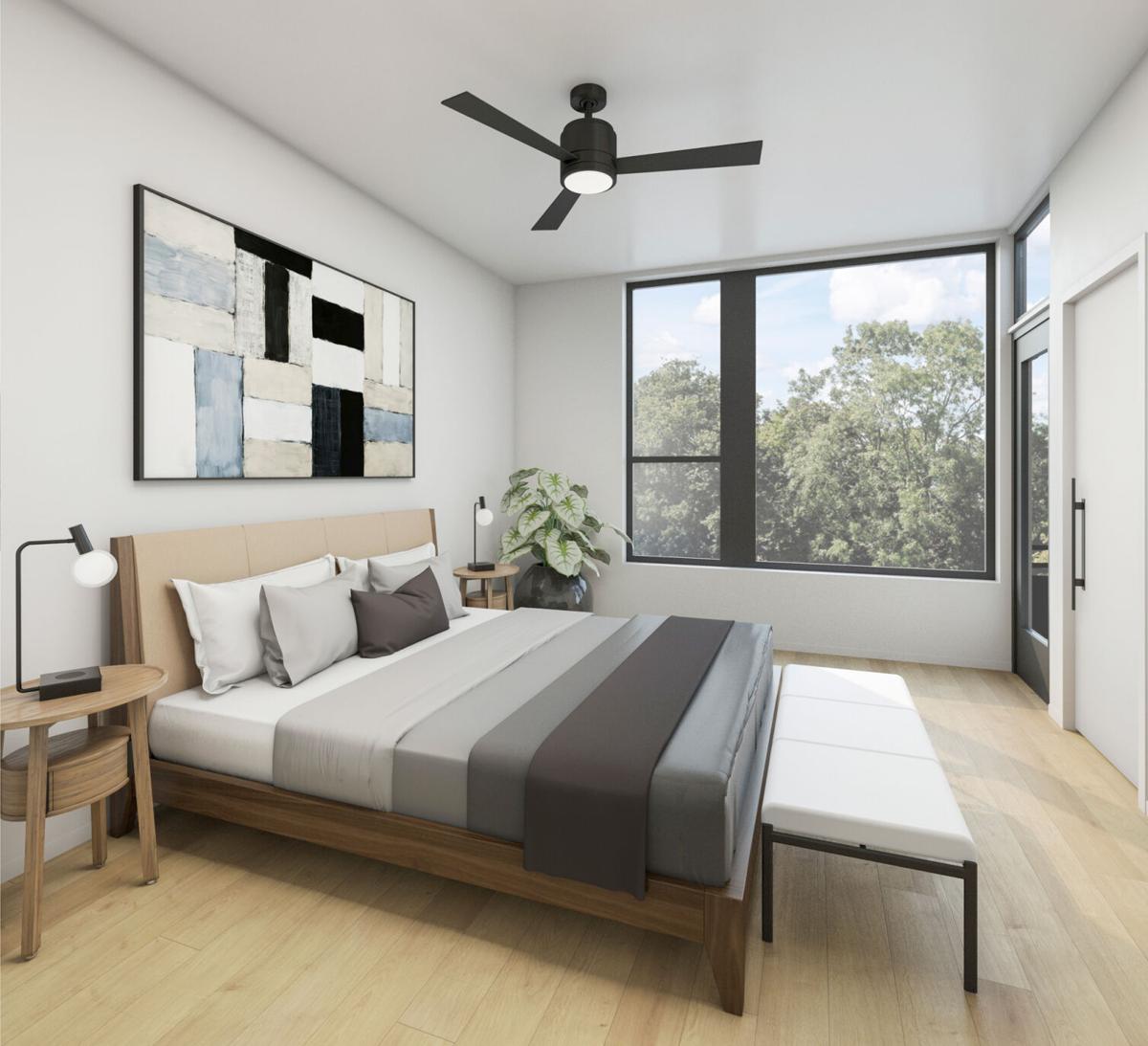 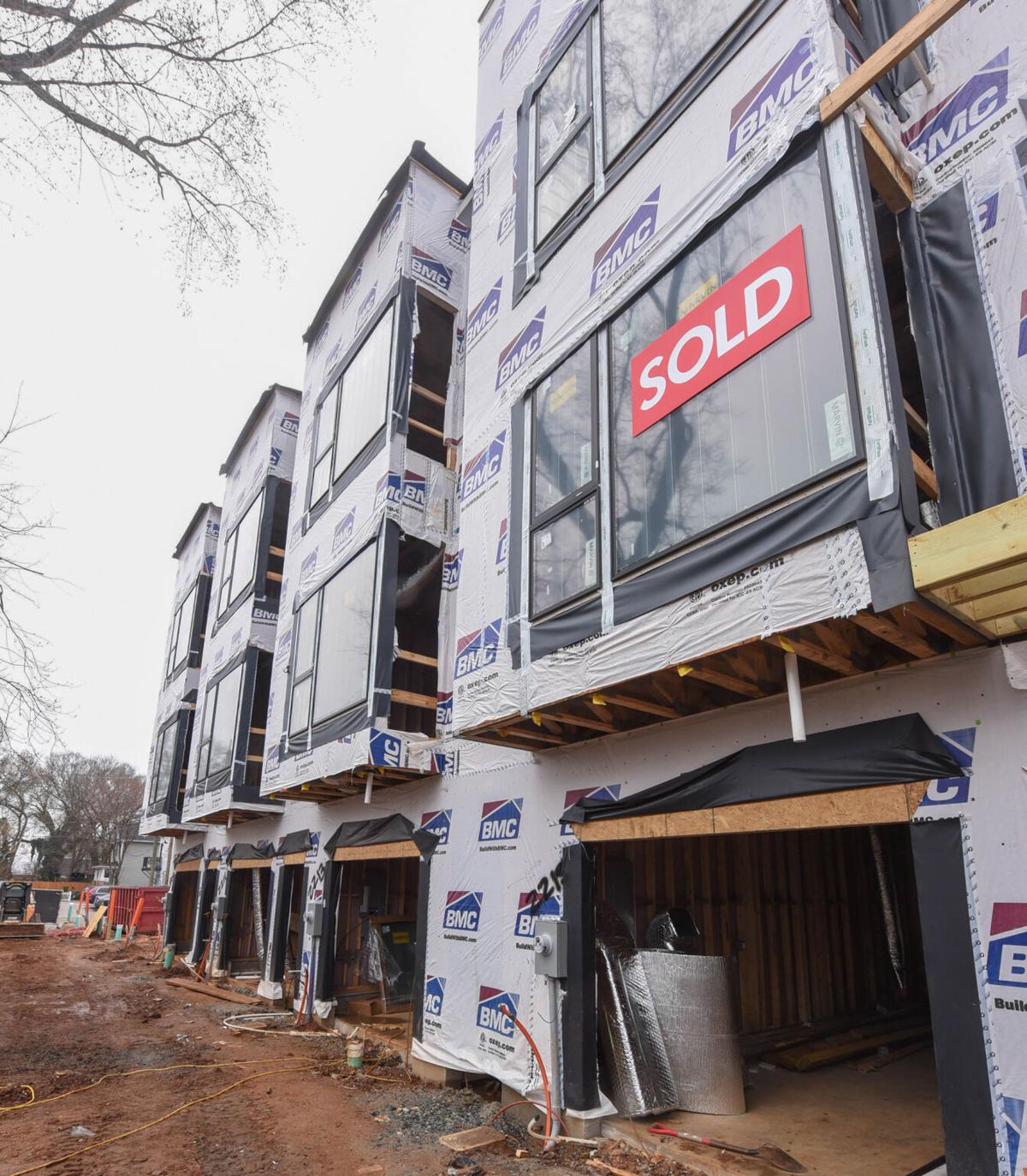 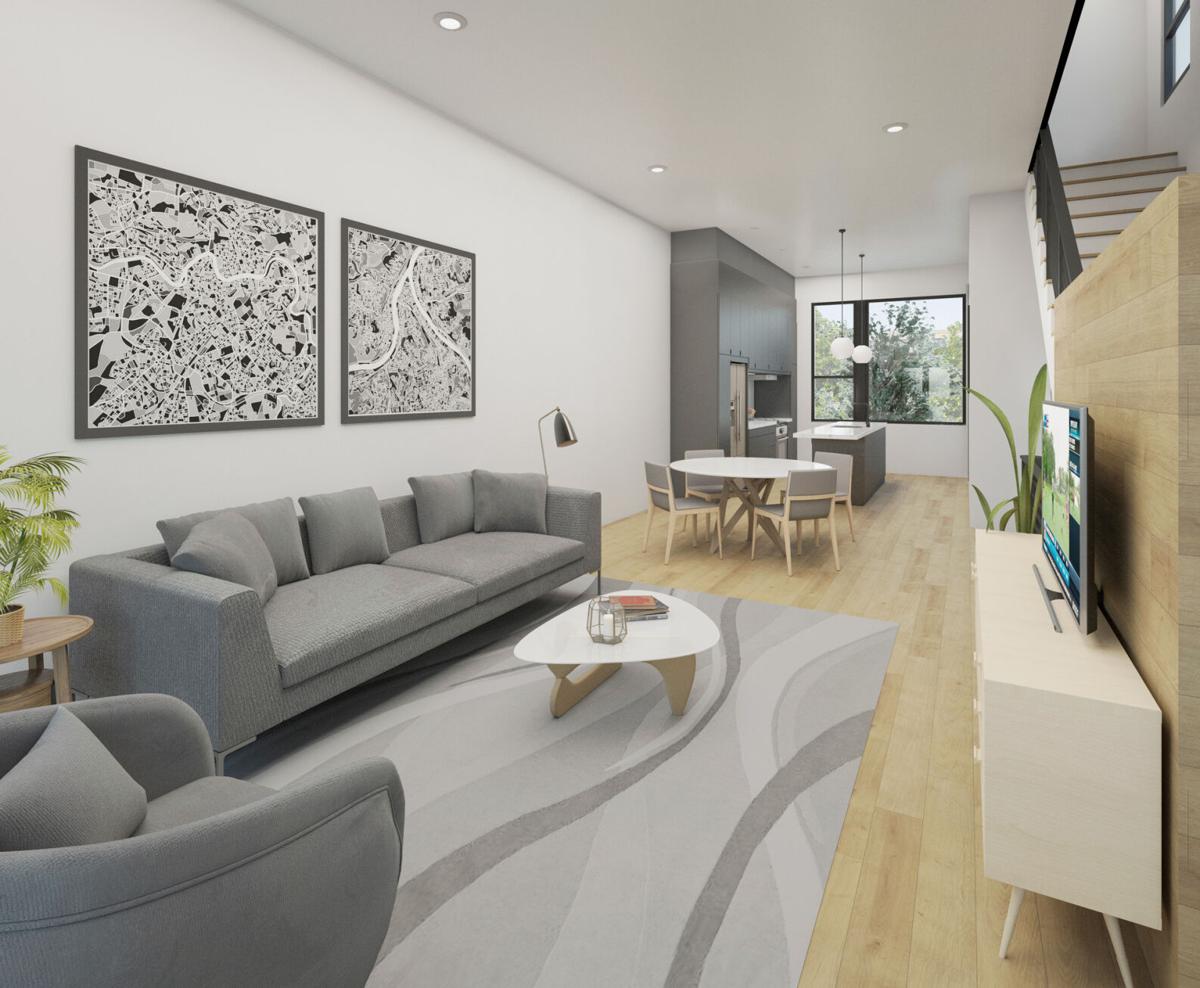 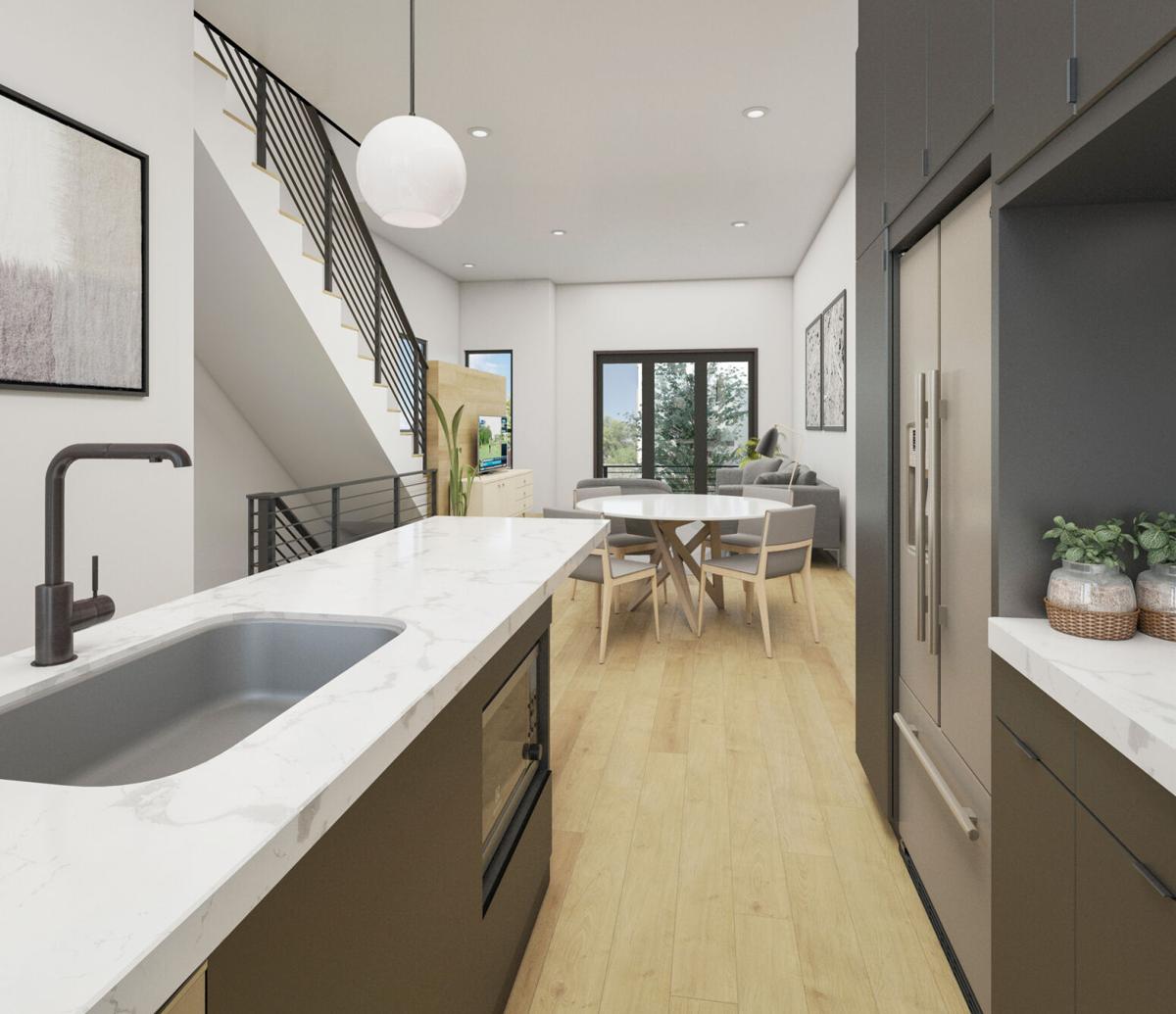 Chances are, if you remember anything about the northeast corner of the 2200 block of West Cary Street, it’s the prominent billboard that loomed over the lot for several years.  You might also remember one of the advertisers’ moving trucks parked on the site.

Other than that, there wasn’t much that stood out.  You might not even have noticed the four attached townhomes and the single-family house that dated back to the turn of the 20th century.  Altogether, the structures had 10 apartments.

“Being roughly 100 years old, the wood-frame structures were marginal in their condition, many having undergone repeated, low-quality/low-budget repairs and renovations,” said Sam Daniel, president and CEO of Scott’s Addition-based Daniel & Company Inc.

Daniel is in the process of changing how we think about that corner, which sits just south of Richmond’s Fan District.  He’s building 19 Modern-style townhomes on the ¾-acre site, and he says the infill development, called The 2200 at Cary, will be instrumental in redefining the area.

“It will give the corridor a more urban feel,” Daniel said.  “It’s going to be a very important influence on that area, and I think our project will end up the first of several along that stretch.”

That section of the Cary Street corridor has been the subject of revitalization efforts that date back to the 1980s, says Dave Johannas, an architect and owner of Johannas Design Group.

“The corridor was pretty rough when I came here in 1980,” Johannas said.  “The Downtown Expressway had cut it off from the neighborhood.”

Out with the old, in with the Modern

Daniel began acquiring the three parcels that comprise the 2200 at Cary site in 2006 and bought the last parcel in 2010, when the nation was in the grips of the Great Recession.

“The property was carrying itself, from a mortgage perspective, so we continued to rent out the apartments,” Daniel said.

Finally, roughly 18 months ago, Daniel tore down the existing buildings, as well as the billboard.

“Removing the billboard was a much anticipated – and welcomed – event for many residents in the area because they thought it was equal to visual pollution,” Daniel said.

With the site cleared, Daniel hired Johannas to design the 19 townhomes.

“He’s a real proponent of Modern architecture,” Daniel said.  “We didn’t want to try to put a new spin on traditional architecture, and we thought a Modern design was the right thing to do in that location because it’s much more urban and progressive.”

Johannas’s design for The 2200 at Cary divides the townhomes into two distinct rows with a courtyard in the center.

The Cary row, which faces Cary Street, will have nine townhomes that are three stories tall, with a rooftop terrace occupying roughly a third of the top floor.  Each unit will have approximately 2,006 square feet of living space.

“The townhouses on the Cary side are well defined with black, four-inch-wide, vertical reveals separating each house, and the balconies create a staccato effect unifying the row,” Johannas said.  “Using the skin of the building to create patterns of fenestration and to tie the stories together is something you see nationally.”

The Mews row, which faces Uptown Alley, will have nine three-story townhomes that sit slightly lower than the ones facing Cary Street, with garages occupying the first floor.  Their architectural style will be distinct from the ones on the Cary row.

“They have a corner window bay with a balcony, and the way they sit on those dark bases evokes the International Style,” Johannas said.

Each unit in The Mews will have approximately 1,692 square feet of living space, not including the garage.  Buyers also have the option to add an elevator.

“The concept was to have the overall community meet the needs of different demographics who love urban living – millennials, empty nesters and families who want to raise their kids in the city,” said Michelle Rosman, a real estate agent with One South Realty and one of two listing agents for the community.

One South Realty’s Andrea Levine is the co-listing agent.

One townhome will face Shields Avenue, and its design will unify the two rows’ distinctive versions of Modern design, Johannas says.

“There’s a fair amount of affordable housing in this area, and this development will create a much stronger diversity of housing, which is one of the goals of urban planning,” Johannas said.

Construction crews are now building five townhomes on the Cary row and five on the Mews row, which represents Phase 1 of the development, Daniel says.

Sales for Phase 1 have been brisk, with six units under contract.  Sales for the second phase haven’t opened yet.

The development’s location is helping to drive sales, as is the rare opportunity to purchase a new-construction home in the city, Levine says.

“In addition, there has been a resurgence and amplified desire for modern design,” Levine said. “Add to the mix a high-quality home designed by an award-winning architect and you have a tremendous attraction.”